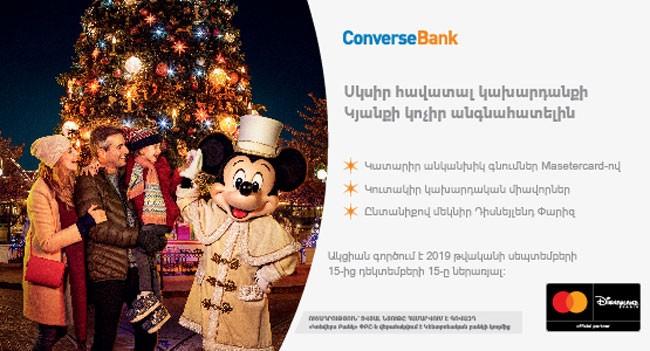 This is a paid Converse Bank advertisment.

Converse Bank, in partnership with MasterCard Payment System, announces the launch of another loyalty campaign. During the campaign, which will be active from September 15 to December 15, Converse Bank Mastercard cardholders by making non-cash purchases and accumulating "Magic" points, will become eligible to receive one of the prizes established.

" Since the beginning of 2019, Converse Bank has launched dozens of promotional campaigns within which its cardholders had the opportunity to receive cash back, and the most successful ones received valuable gifts. Particularly, during one of the promotions of non-cash transactions, three of the Converse Bank customers  got a chance to spend vacation in Sri Lanka, and during another one - ten customers were provided with the opportunity to visit one of the ten European cities. By the way, each of the trip packages was designed for two persons, "said Converse Bank.

The grand prize of the newly launched campaign is also a trip package, this time it is a family tour to Paris Disneyland. It will be awarded to the customer who has accumulated maximum number of Magic Points as a result of non-cash purchases. The other 4 most active participants of the campaign will also receive prizes in the form of family holiday tours.

At the same time, within the framework of the campaign, the Bank offers another opportunity. For the period of September 15 - December 15, potential and current customers of the Bank may receive new MasterCard payment cards, with a 50% discount on service charge throughout the card validity period.