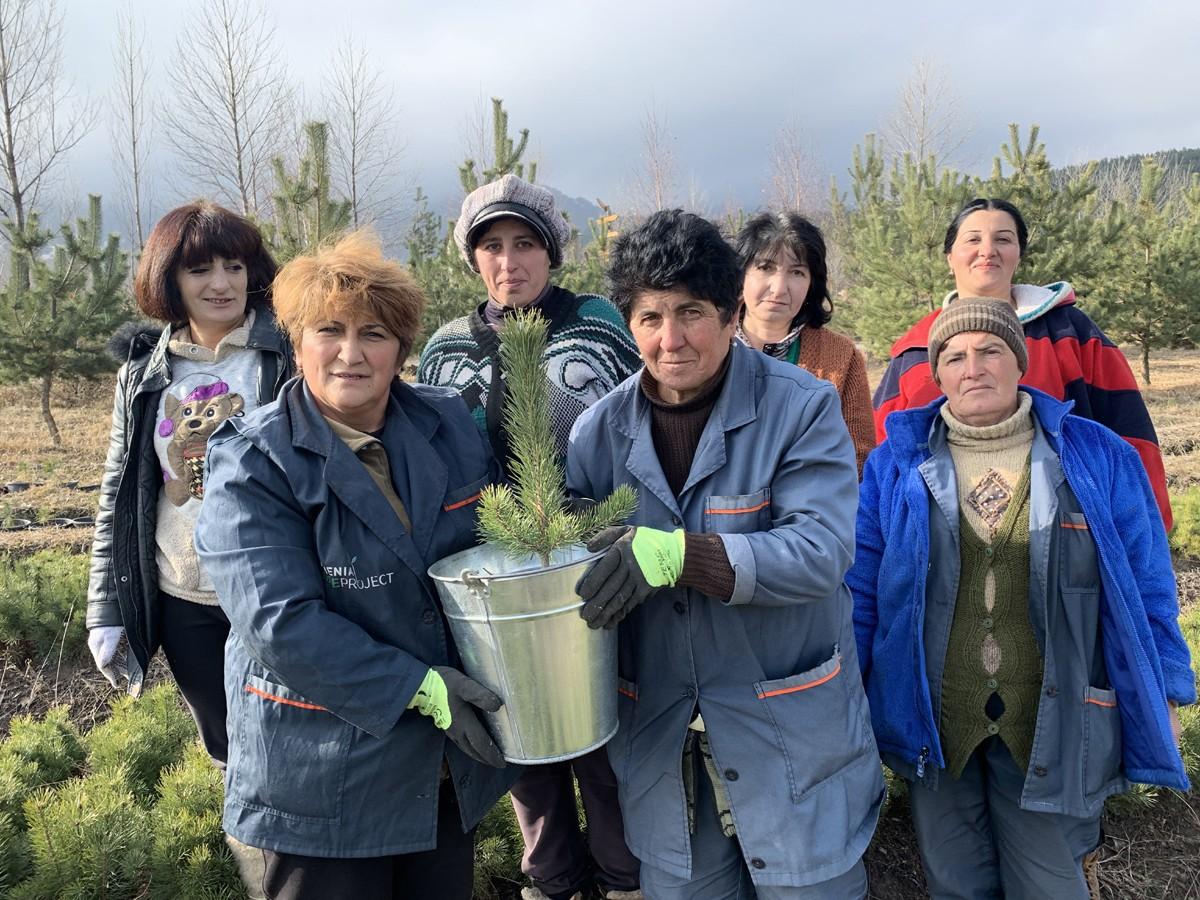 MIKHAYLOVKA, Lori--Following a year of 25th anniversary celebrations and the inaugural Forest Summit in October, Armenia Tree Project planted its six millionth tree this fall. At a time when tree planting is trending across the globe, ATP is thrilled to reach this milestone, placing the country among others that are part of the solution against climate change.

ATP’s six millionth tree, a Scots pine (Pinus sylvestris), was sourced from and planted in Armenia’s northern Lori region. The pine traveled from the Mirak Family Reforestation Nursery in Margahovit village to a 43.4 hectare (107 acre) forest being planted in Mikhaylovka Village.

Like all the other trees ATP produces, the Scots pine is a native species that commonly grows in the northern and southern regions of Armenia. The seedling was selected and unearthed by Mirak Nursery employee Siranush Harutyunyan. “All the seedlings we grow are special and beautiful to us, but I chose this particular pine because it stands taller and prouder than the rest,” explained Siranush.

Unlike ATP’s five millionth tree, which is under the care and attention of staff at the Karin Nursery, the six millionth would have to thrive in less hospitable conditions, in the wild. “Its roots are strong and healthy, so it will withstand the elements. We’re certain it’s going to survive in the front lines. It’s a real warrior,” concluded Siranush, as her coworkers nodded in agreement and helped her carry the tree to the truck in a bucket full of soil.

About an hour later, the much-anticipated six millionth tree was given a great big welcome by ATP’s seasonal workers at the new forest site in Mikhaylovka. The northernmost village was almost-entirely covered by fog, but that only added to the drama of the day.

Arevik Zoroghlyan was picked from the crowd to do the honors. She was shy and hesitant at first but quickly decided to accept the responsibility and enjoy the moment. The hole was dug with help from her three young teammates – Sarkis Bezoyan, Armen Khachatryan, and Gevork Khachatryan. When Arevik completed the task and pressed down on the soft earth with her hands, the planting brigade broke into applause.

“ATP has given me work for the past six years. I help them plant forests near our community,” said Arevik, flushed with delight. “I’m proud to be a part of the story of the six million trees. It’s one of the best gifts I can give my children, my grandchildren, and my country.”

This fall, ATP hired 60 people from Lori to help with afforestation and reforestation projects. “Using trees, we’re able to improve the quality of life in communities, so it gives people a good reason to plant forests and preserve them,” said Forestry Manager Navasard Dadyan. “When we plant forests, we make sure to include different species so that a more complex ecosystem can be formed. The trees store carbon, regulate the water cycle, enrich the soil with nutrients, and promote biodiversity,” he added.

It’s an exciting time to be an environmentalist in Armenia. Experts and people around the world have recognized the benefits of planting trees and expanding forests. The Armenian government has pledged to double the country’s forest cover by 2050, and recently announced a campaign to get 10 million trees planted on October 10, 2020. What is being called the “10-10-10 Campaign” will increase Armenia’s forests by one percent. The long-term survival of these new forests is essential for them to serve their purpose of offsetting greenhouse gases and fighting climate change.

ATP’s forestry and community tree planting programs plant an average of 230,000-250,000 trees and shrubs every year. The organization works with communities across the country for successful survival rates. This fall, ATP’s forestry team added 190,651 trees to forests in the communities of Mikhaylovka, Tashir, and Saratovka in Lori.

“Armenia has a grand objective to double its forest cover by 2050,” began Dr. Anthony S. Davis, interim dean of the College of Forestry at Oregon State University during his keynote speech at the Forest Summit hosted by ATP and AUA in October. “Now is the time to define what those future forests look like. By 2050, half of Armenia’s forest cover will be based on decisions made today. There should be no greater calling to work together than this piece of information,” he added.

ATP will hold these encouraging and wise words in mind, as it moves forward into the next 25 years of environmental work in Armenia.