Two years ago, a group of Armenian filmmakers and film professionals concerned with the industry’s development in Armenia, set up the Independent Filmmakers Community of Armenia (IFCA), which aims to bring together Armenian industry professionals, internationalrepresentatives, as well as organizations and agencies who have a special vision and are concerned with cinema issues.

In the past two years, the initiative has worked on developing a law on cinema, organized professional development programs, presented road maps on overcoming difficulties addressing budgetary gaps in state funding system as well as highlighted industry issues that are ongoing and unresolved, via media and social platforms. They also brought international experience on the table by initiating meetings and discussions with internationalexperts and prominent industry reformers.

As a result of the extensive work carried out over the past two years, in cooperation with the Ministry of Education, Science, Culture and Sportsa joint conference on Armenian Cinema Development Strategy was held by IFCA founding members in Aghveran on December 1st, 2019 to conclude this year of work.

The main purpose of the conference was to establish a new dialogue between filmmakers, the government and the legislative bodies, as well as state organizations and industries related to film. 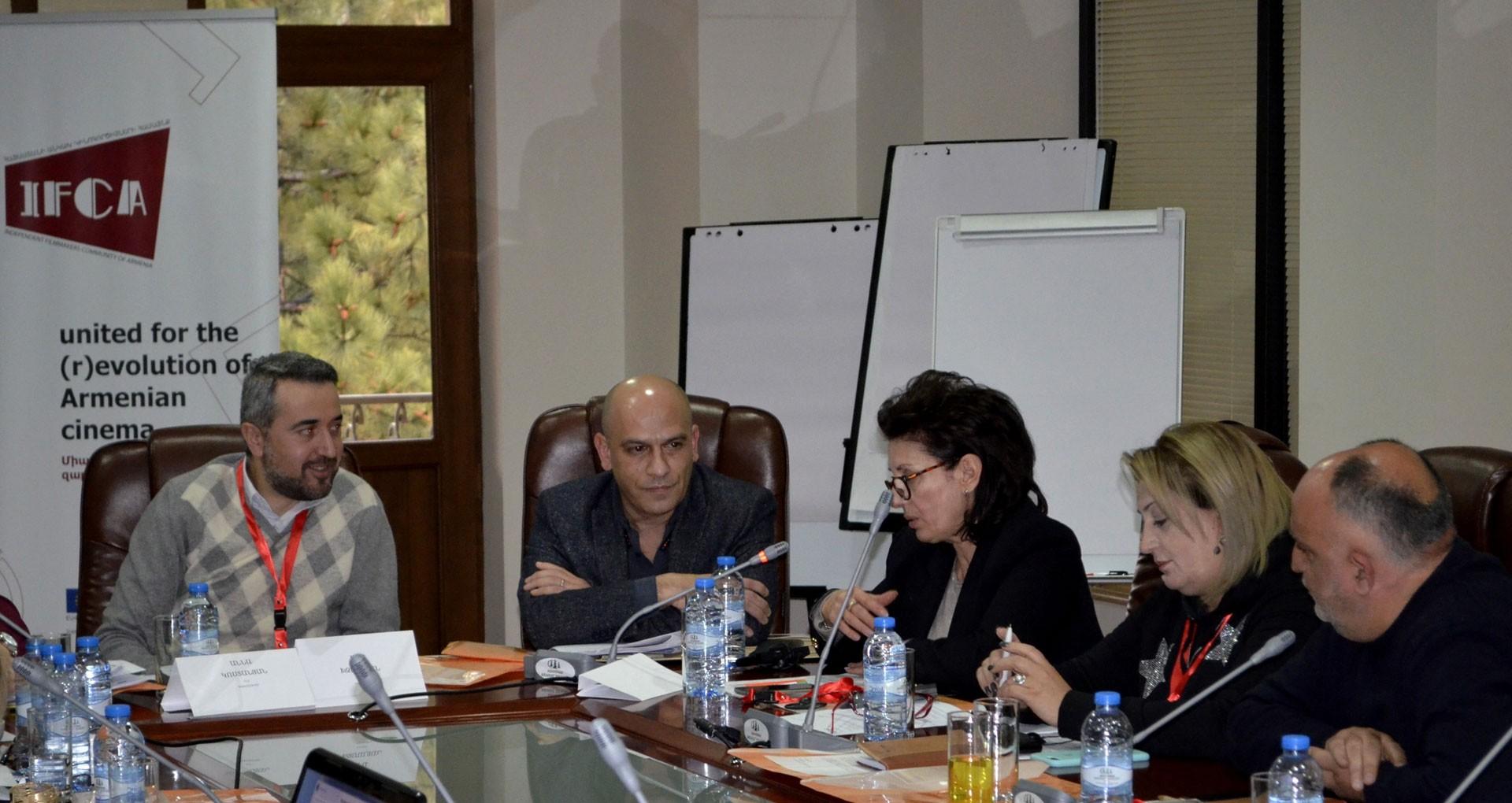 The workshop was attended by Deputy Minister of the Ministry of Education, Science, Culture and Sports, Ara Khzmalyan, MP Anna Kostanyan, Chairman of the RA Tourism Committee Susanna Safaryan, Director of the National Cinema Center of Armenia Shushanik Mirzakhanyan, Advisor to the President of the RA Cinema Association, Arayik Manukyan as well asinter-sectoral representatives.

According to Deputy Minister Ara Khzmalyan: "Such conferences are very beneficial for us; it is important to raise issues in a dialogue format to find solutions."

The conference was divided into three thematic sessions. The first session was devoted to international co-production strategy, as well as to financial regulations, state support models and producer-state relations, the second session was about setting criteriasystemfor selecting Board and Film Committeefor the cinema state funding body.The third session addressed public and private investments in cinema, funding models and incentives, as well as the need and preconditions for increasing the state budget support for cinema.

We talked to IFCA co-founders and conference moderators Armine Anda, Raffi Niziblian, Seda Grigoryan and Victoria Aleksanyan in short answer format on the above-mentioned thematic areas as well as the issues identified during the workshop.

Apart from public funds, what alternative funds can the film industry expect? What mechanisms and strategies are being developed for co-production?

-IFCA has developed a draft cinema law which has an article aboutallocating alternative resources to the state budget for cinema. The draft is now in process of review at the National Assembly.The purpose of this session was to discuss and together with foreign experts find solutions to cinema funding structurefinancial-legal issues that hinder theco-production in Armenia. The strategy to promote international co-production implies first of all a relevant financial and legal basis. The countries with which we co-produce provide financial grants to their producer (considering all the state input as the input of the producer), and nowhere does the state act as co-producer.I must say that both drafts (both ours and the one presented by Golden Apricot Fund) offer solutions to this problem, but aoneshould also be implemented sooner thanlater, thus we are going to discuss them during this conference and submit all the ideas to the appropriate government  bodies after the conference; it will be a transit but legal way and will, before the law is adopted, help to develop the local producer, the co-production, and therefore the state. That is why this conference is a joint one. A joint conference of independent filmmakers and the state for the benefit of the independent producer and therefore the state. 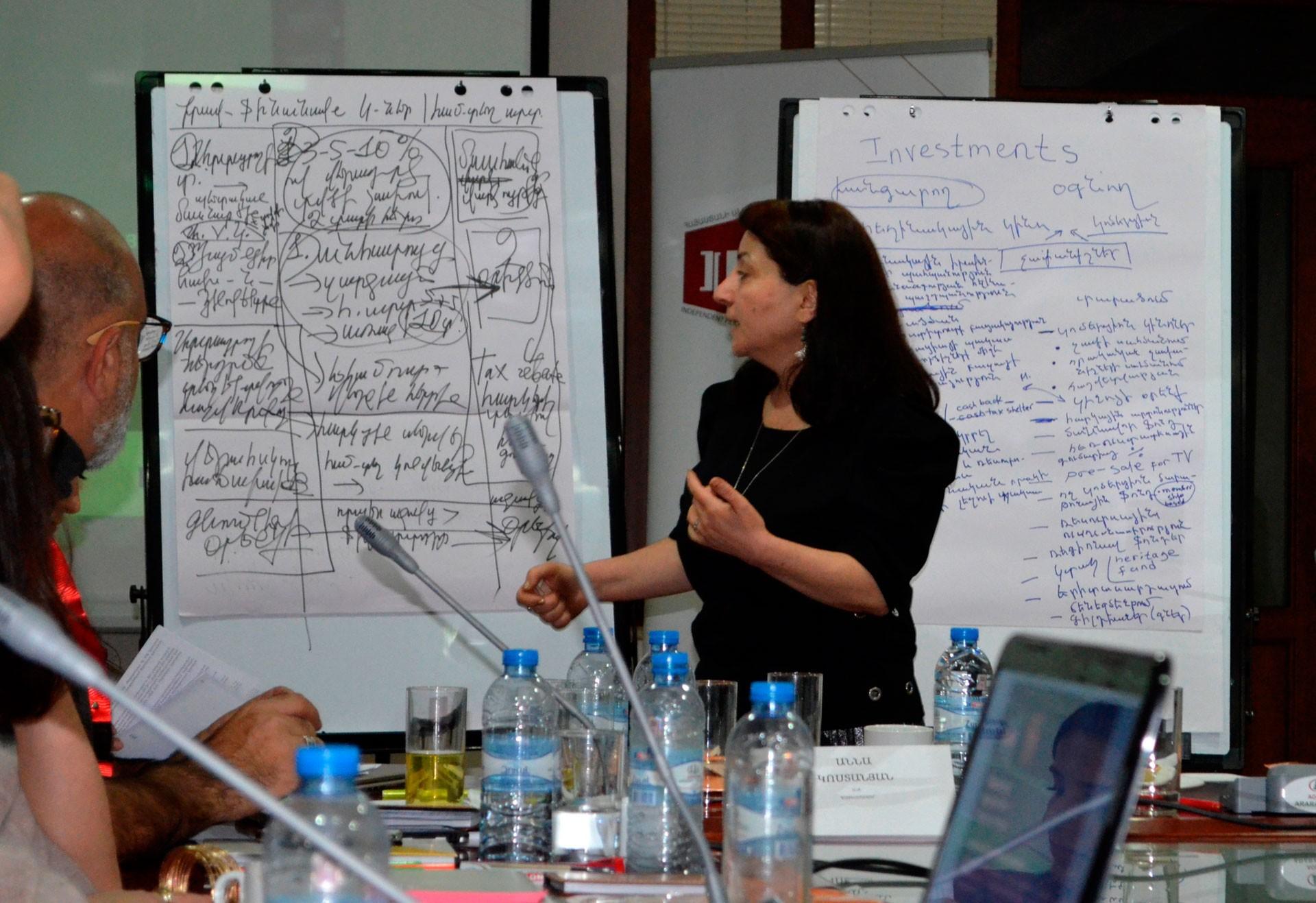 During the conference, the general main issues hindering the development of cinema were raised and identified. Please detail the priority issues and the roadmap for resolving them, if any exists.

- During the third session of the conference we touched upon the necessity of various types of investments.Three main directions can be identified here: government investment into the state support budget for cinema (from other sources of profit directly into cinema budgetin a form of a certain percentage), cashback system and other tax incentivesto be enjoyed by theproductions, separate private donations to national cinema for its rapid development, and eventually creating a new private equity fund, through tax benefit mechanism.A separate conversation about creating a Film Commission to boost Armenia’s filmmaking and tourism potential using beautiful and unique film locations in the regions, was also discussed and picked up for a further conversation by the Prime Minister Ara Khzmalyan and the Chairman of Armenia’s Tourism Committee, Susanna Safaryan. The head of Academy Films, Aram Torosyan, expressed his willingness to provideconsultancy and necessary video resources of the most picturesque Armenian locations to help generate action.

I think, that in order to start these processes we first of all need a serious research study of all our resources available in Armenia, starting with locations, technical capacities and finishing with human recourses. Such research must become available for both government bodies and international interested parties, in order to start building a further strategy.

Additionally, the area of industry development through investments can also be studied on examples of other industries such as, for example,information technologies. We invited the founder and partner of Silicon Valley based technology investment company Smartgate and prominent IT investment consultant in Armenia, Hambardzum Kaghketsyan, to hear him share his ideas on angel investment.

All of this must be done with a well-defined strategy and purpose, such as becoming competitive, making Armenia visible on the world map of cinema and promoting art as a state-conscious step towards a civil society.

What work should be done to promote public activism and mutual trust in the film industry?

-Citizens interested and concerned with the problems and issues of cinema can make their contribution to the development in this field. Everyone's active participation is important; consciousness, a desire to move forward, co-operation with one another, exchanging opinions, these are all key elements for development.We need to be able to talk, listen to each other, come to a conclusion, and then act logically.We need to find sources of expression, such as media platforms, where we can discuss issues related to the cinema, develop projects, ideas, opinions and even programs that will benefit the field.A conscious citizen is very important in this chain; New ideas bring power to the common space, fostering creative development of the infrastructure, and the co-production (both domestic and international).When individuals and organizations such as IFCA unite for the development of one sector, a problem-solving plan moves forward. Next, same processes may start in music, theater or other sectors. What we do here can be defined as a positive experience for others to pick up from and continue. A constant work and patience arerequiredfor reforms in all areas. 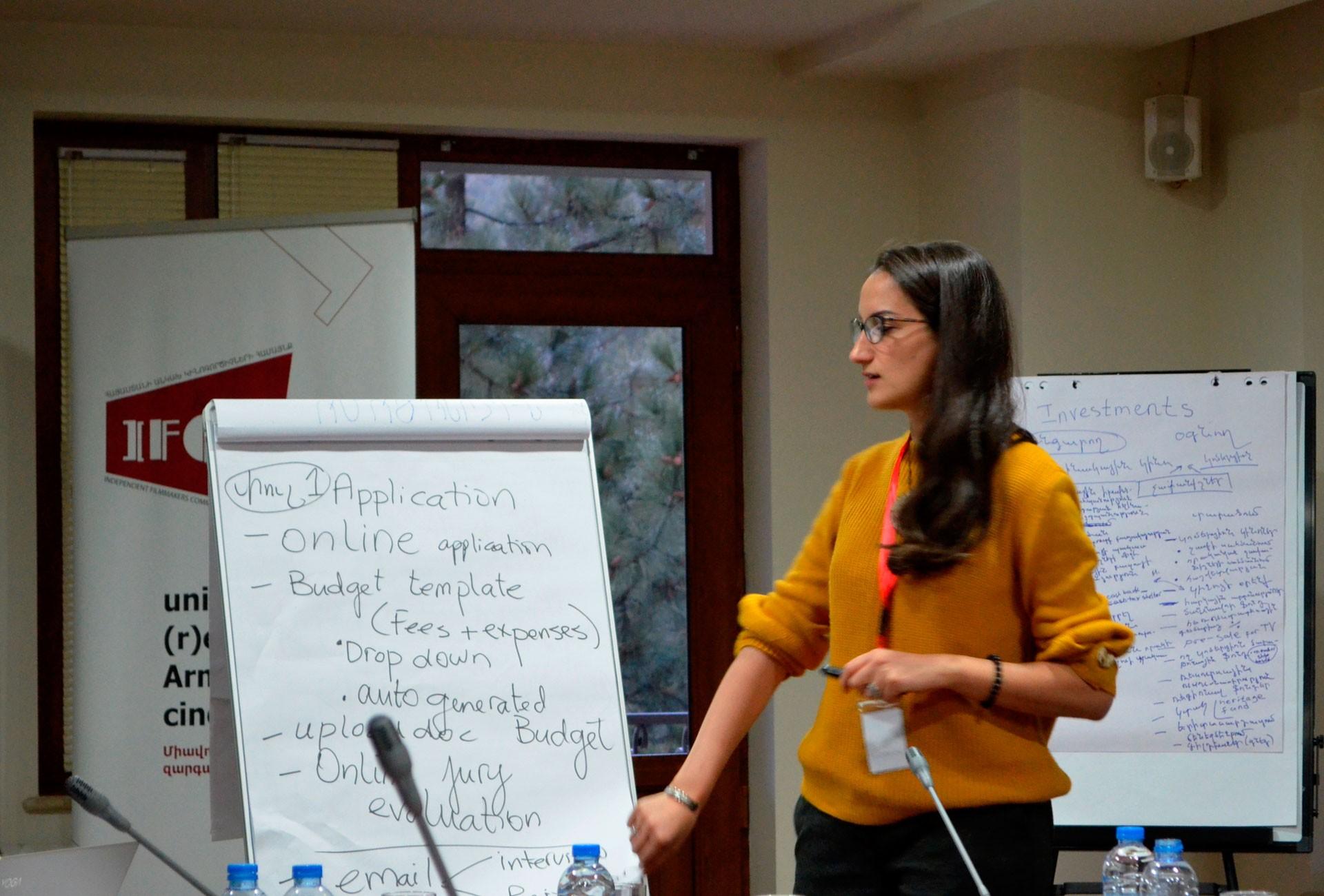 What are the primary criteria you are trying to set for the Film Quality Management, as well as creation of film fund boardand film committee? Do the conditions of cooperation and common language create opportunities for progress in the field?Answer by Seda Grigoryan, Head of the Creative Europe Armenia Office, IFCA Co-Founder, Director:

- For the solution models of these issues we have considered the experience of some Eastern European countries. A few months ago, we hosted Arben Zarku, President of the Kosovo Cinema Center, who was very willing to share his experience and offer solutions. It was pleasing to note that his solutions were very much in line with what he presented.

This question has several layers; First of all, it is necessary to ensure the professional training of the committees. Shushanik Mirzakhanyan, the President of the Cinema Center of Armenia, voiced her concern during the conference that there were simply no professionals to meet our preferred high standards, but we think the situation is not so hopeless.

What are the criteria we have proposed for selectingfilm committee members? To present our idea in short it must be a set of criteria such as at least one full-length film, participation ininternational festivals and receiving awards, jury experience in a recognized festival, an experience coordinating festival programs, and so on.These are the necessary preconditions, given our policy on the development of cinema, which we outlined in our draft law; For Armenian cinema to grow, strengthen and enter the international arena, havefilms andachievements at the most recognized film festivals of the world, we must stop satisfying average standards. In this respect the international experience is very important; we are very similar to Kosovo; In smaller-scale cinema communities, like ours, personal relationships play a large role, whether or not we want to, thus the risk of conflict of interest and bias is high, which is why we believe that the involvement of international professionals in committees is a must.

I should point out, that all the conference participants were in favor of this provision, but there was an opinion we have problems with funding a participation of international experts. But let's be honest, this is not an unsolvable problem at all.

The necessity of the Board for the body financing the cinema was also discussed and agreed that international experts would also be needed there. Another proposal was made to move the application process for film project submissions to an online platform and get rid of the need to print dozens of papers, packages, complicate budget spending standards, and more.

There are many questions raised, but if afurther constructive format is used, we believe we can find viable and practical solutions. It is very important that this dialogue remains open, in a friendly atmosphere, and that we always keep in touch with international experts and learn from their experience. 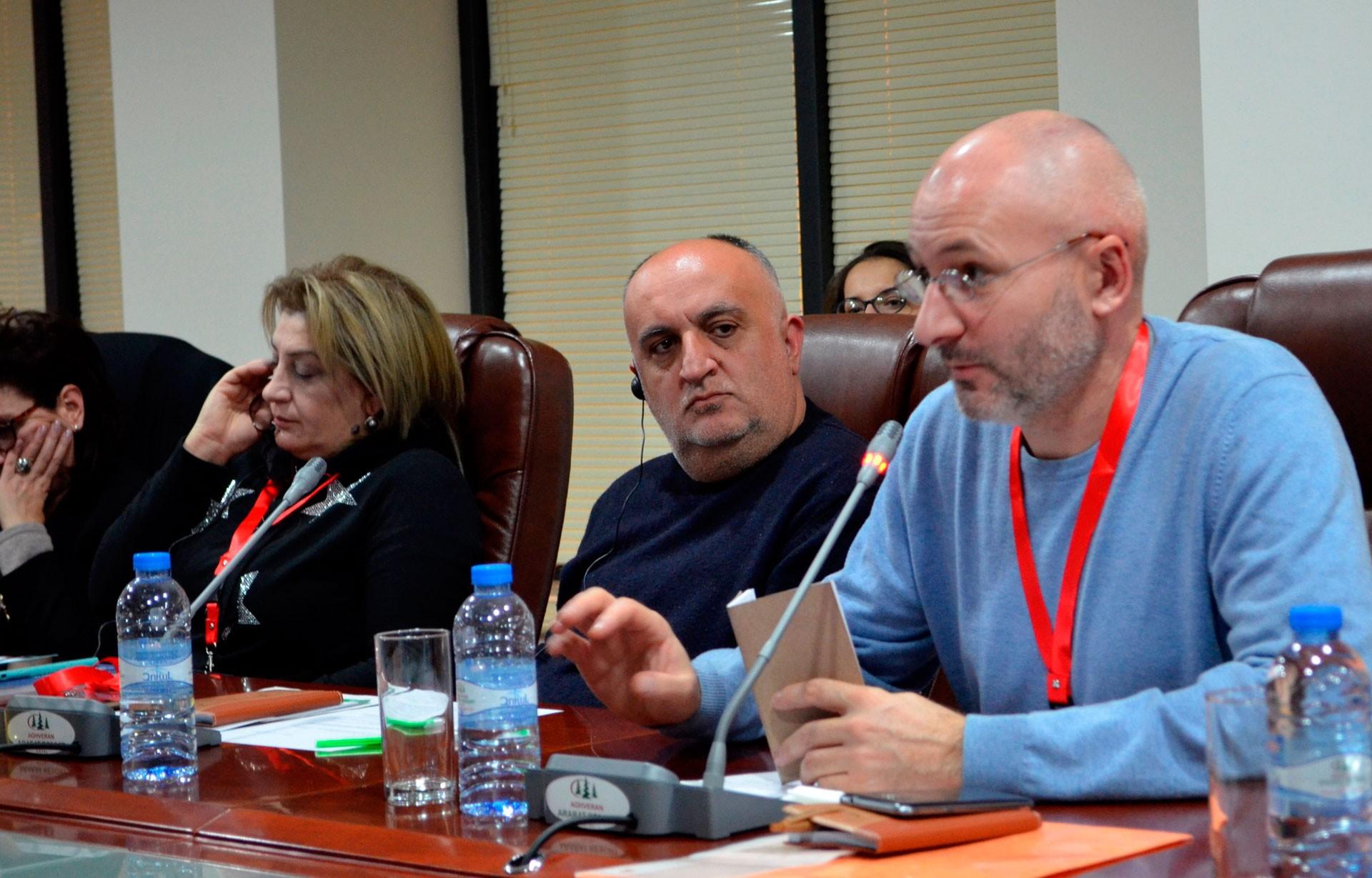 Tamara Tatishvili, author of important reforms in the Georgian cinema, former director of the Georgian National Film Center, producer and film lawyer, was contacted via call and spoke during the conference.

At the invitation of IFCA Co-Founder and conference general coordinator Satik Stepanyan had a live meeting with Alirezah Tabeshi, the President of Farabi Iranian Film Foundation and his advisor Manoucheen Shahsavari. The director of Kosovo National Film Center Arben Zarku also had a Skype speech during the conference.

It should be added that the results of the workshop will be reported to the Ministry of Education, Science, Culture and Sports for further work on sector reforms.