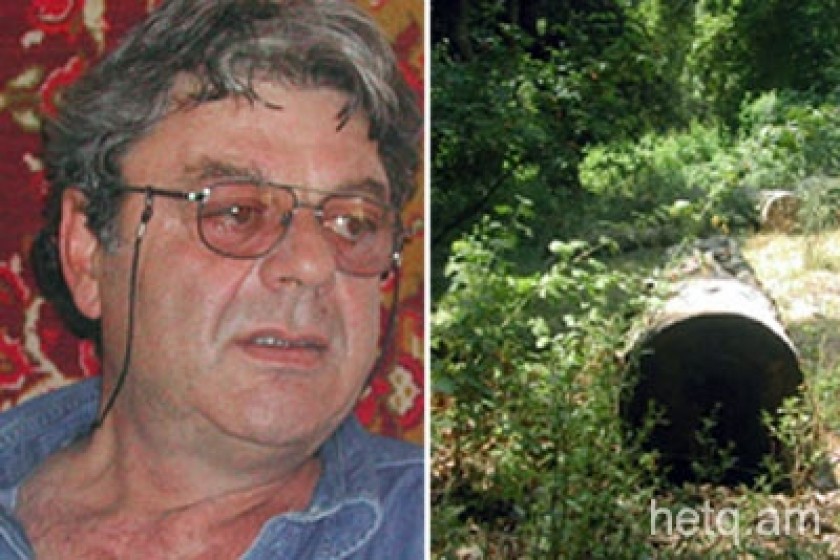 Illusions and Reality: The Vision of Ditsmayri

“They came in the middle of winter and shut off our electricity. What Turk would do that?” asked Nazo – Nazareth Liparityan – who moved to Ditsmayri from Beirut in 1999.

Nazo's eyes welled up with tears and I suspected that he had never been so disheartened in his life. “All is lost; there is no hope,” he said.

The Karabakh electric company had disconnected the power supply to the village of Ditsmayri because of unpaid fees amounting to around 2,000 dollars. “We'd sought help from everybody – the party, the government. It took nine months and ten days before the power supply was reconnected,” said Nazo, who belongs to the Armenian Revolutionary Federation, or Daskhnaktsutyun. He attributed a share of the blame for this situation to his party.

Ditsmayri is located in the southern part of the Kashatagh region, eight kilometers from the city of Kovsakan.

The Armenian Revolutionary Foundation took on the task of repopulating Ditsmayri. In 1999, around thirty young Armenians from Lebanon and Syria decided to start a settlement program in Kashatagh, at the initiative of General Narek Abrahamyan. The first village was Ditsmayri. Now, of all the settlers, only Nazareth Liparityan remains. Whenever any conversation with Dash naks turns to the topic of liberating occupied Armenian land, I always mention the case of Ditsmayri. The party that speaks of “Armenia from sea to sea” could not even repopulate one village – that's a fact, and its declarations about those territories is only a vision. We have been unable as yet to locate any details about actual spending on this program. Party members who have contributed money to the program are just as interested in that information as we are.

The repopulation of Ditsmayri began in 1998. A plane tree grove stretches here from the village of Tzav. 70 people live in Ditsmayri today. Mher Arakelyan, who fought in the Karabakh war and moved here in 1999, is the head of the village administration. He was the former village head's assistant, a position he held for a year. Mher was also actively involved in the transportation of 15 wooden houses from Armenia to Ditsmayri. “I received a memorandum from the party saying that they were repopulating a village here. I came and stayed here, although I'd decided earlier to go to the region of Martakert,” said Mher. He lives here with his family.

“Electricity is a huge problem; people have trouble paying. There are past debts. Now they're forcing us to pay them off all at once, which is unacceptable. Those debts aren't the people's fault; nobody warned them that they had to pay for electricity. Nobody told them that they had to go to a certain place and pay electric bills. There isn't even a place to make the payments here, which doesn't make sense. So the debts piled up. Now the village is paying around 99 percent of the monthly fees, but they've come and said, ‘You have debts from before. Pay up, or we'll cut off your power supply.' But we're resisting. We're not letting them have their way and we never will,” said Mher.

In the village that neighbor Ditsmayri, the electrical supply is disconnected from time to time because of debts. The relocated residents, who for a long time had not had to pay for electricity, face many difficulties. They do not have the money to pay those bills. Many families have packed their things and left the area because to these problems.

Mher, who has lived in Ditsmayri for seven years, believes that life as it is now holds few prospects. “There is no future here, at least not for the next 15-20 years. Fifty percent of the people don't care whether or not this territory is returned. They are indifferent to where they live. The conditions they have to put up with here are bad, like they are in Armenia, so it's all the same to them. This part of the population did not come here based on any principles or ideas. Many of them had no place to live there, so they came here. Around 20 of the remaining 50 percent are here on ideological grounds, so they naturally do not want to see this territory returned. They have either been part of the war, or connected to it in some way, or belong to some party and are politically active. The other 30 percent would not want this land returned on patriotic grounds. There is no universal attitude among the people about returning these territories and there cannot be one. There is no panic; people know that if the decision is taken to return the land, they'll have two months to tie up loose ends and leave. The people here have always harbored these thoughts, whether openly or in secret. You can't force someone to not think about something. Since the status of Karabakh remains unresolved, it is natural for such thoughts to occur,” said the village head.

The village is not connected to the main highway, and there are no telephone lines here. “Even if you want to make an investment in this village, that road makes it impossible,” explained the village head. “Nobody from outside passes by this village, so no outside trade is possible with the locals. Such trade is only possible in Kovsakan, because there are roads passing through there. But that has its risks, too. Those who want to come here and invest – and some of them are people close to me – say, ‘I will do it on one condition. If the territory is returned, then you have to give me my money back.' They want a guarantee of some sort, and that's normal. Electricity is unstable – they could come and turn it off at any moment, and there would be no power supply for a month. The state doesn't spend anything to keep the villagers here. They give us privileges which are useless - it's just as good as not having them. It does not add anything substantial to the villagers' income. For example, they do not invest in capital construction. The loan they give for animal rearing is insignificant, and the villagers have to return it over ten years. But it is not used to buy livestock; rather, the villagers use the money to buy food, having come here with nothing of his own. People want at least bearable living conditions, only then can you start to convince a villager to stay,”