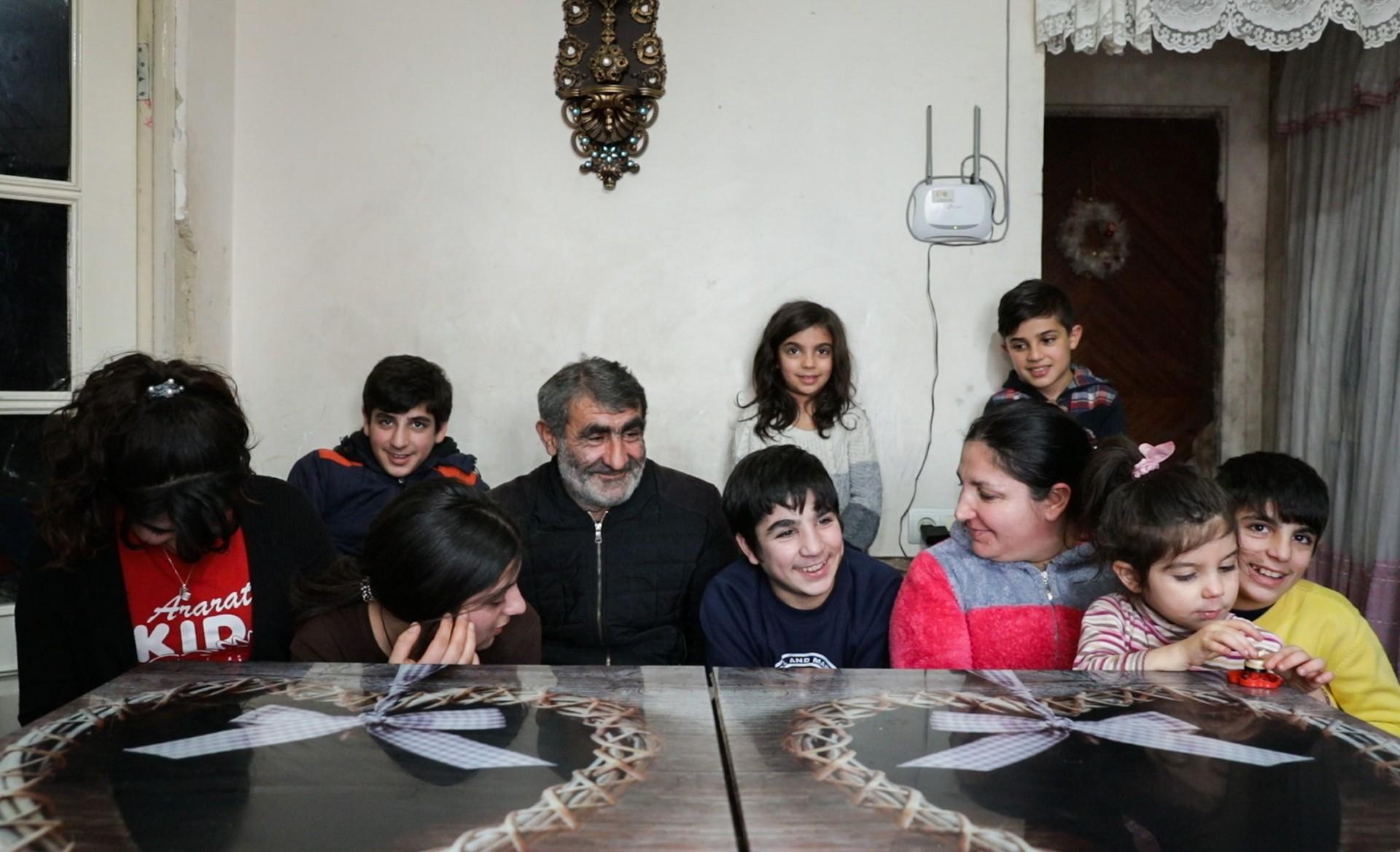 Yerevan Family of 13, Living in 34 Square Meter Dormitory Space, Looks to The Future 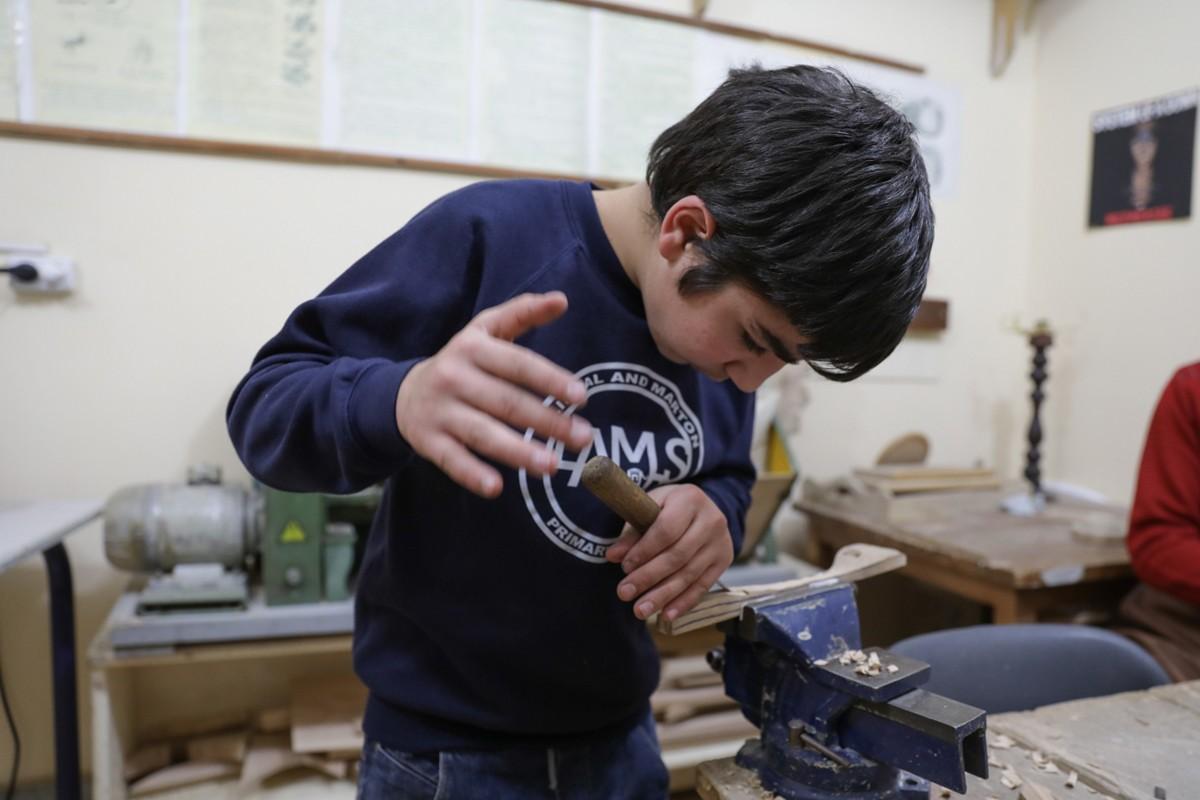 We are in the wood art group of Orran, a charity organization in Armenia.

The well-lit workshop is neat and organized. Soghomon and Manvel work in one of the rooms. They make wooden spoons from beech. They say they had made many things before the New Year, which they sold at a charity fair organized by the center.

Twenty percent of the money goes to the children at the center, and the rest is spent on the needs of the woodworking team. The boys are happy. Soghomon says that when he gets the money, he happily gives his mother something to buy for the children.

The master craftsman from the neighboring room, Hrach Hunanyan, comes in and makes some adjustments to the boys' work. Hunanyan says that Soghomon is one of the most hardworking and capable students in the group. In just three years, the boy has mastered many of the techniques of the craft and says he wants to become a sculptor. Hunanyan says that if he works hard and has the passion, he can become one. 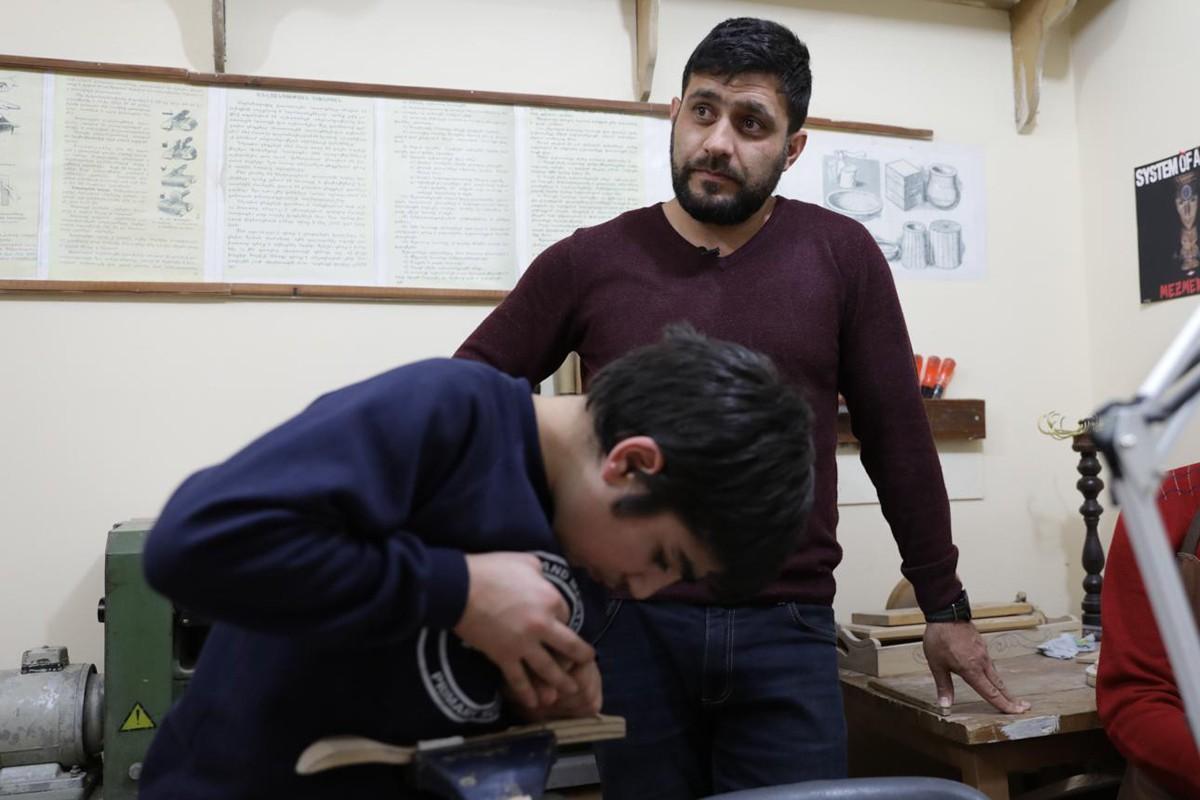 Soghomon lives, with his parents and eleven siblings, in a dormitory room measuring 34 square meters. 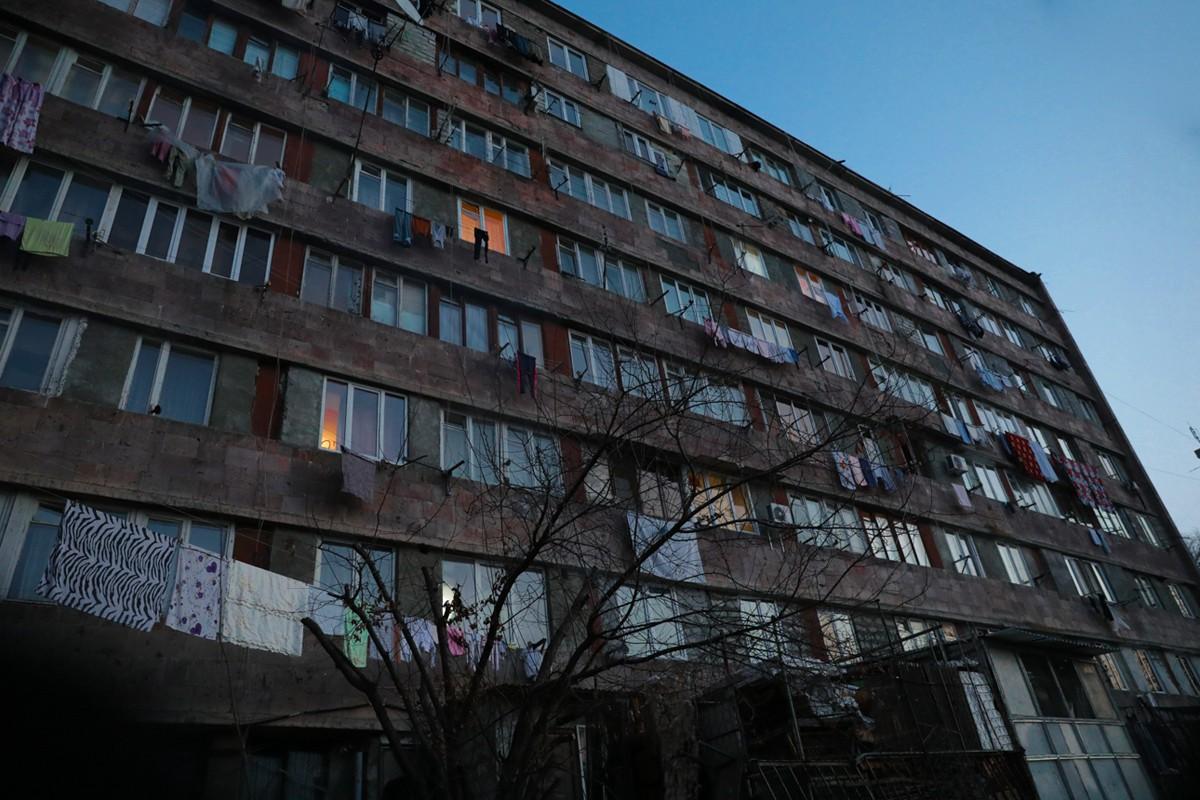 We could hardly find a place to sit. The boy’s maternal; grandparents had come to visit. The place was packed.

The washing machine along the wall was working, and the Christmas tree on it was constantly swinging. We spied folded linen through the half-opened door of the wardrobe.

Virab Shaboyan has 14 children. The media in Armenia extensively reported about the family three years ago.  They came from Karabakh and lived in the basement of the hostel. After that, the municipality of Yerevan allocated this location to them for a period of ten years. 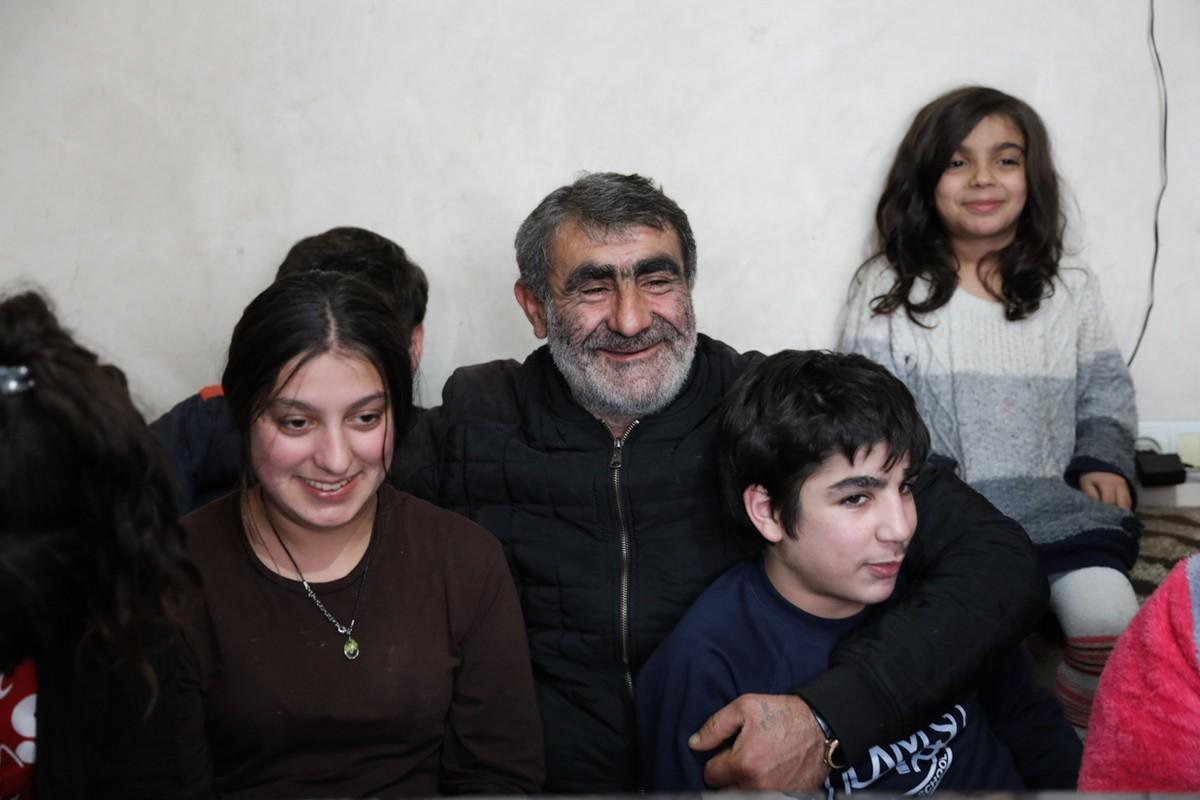 Mr. Shaboyan says they are happy with what they have and don't want to talk about the past anymore. The children have grown up and help their parents.

Mr. Shaboyan now has a job asphalting roads and earns 8,000 drams daily. His wife occasionally makes lavash. When she can’t make it, her daughters go instead.

“Our kids really give us a lot of strength. I see them standing beside us, in support. It’s our biggest strength.  Whenever I come home from work, the kids greet me in turn. It’s only at that moment that you understand it’s power,” says 49-year-old Mr. Shaboyan.

Anna, his wife, agrees that all their children are hard-working and eager to learn.

The sofa is filled with children, like birds sitting on a branch. The youngest of the children is Monte, 3 years old. Elderly daughters Satenik and Mane are in college. Satenik is studying programming and Mane, the law.  Satenik also works in a supermarket. With the money she receives, she manages to buy gifts for family members.

“This was the first New Year that we really were happy. I was very proud that on New Year's Eve, my daughter came and said, I have a gift for you. I received a watch, my wife a bracelet, and she put an additional 40,000 drams in each of our presents. She also bought a watch for her brother in the army,” says Mr. Shaboyan

We avoid talking about the family’s difficult living conditions. The Shaboyans say everything is proceeding nicely. Because of their Karabakh registration, family members do not receive benefits from the Yerevan government. 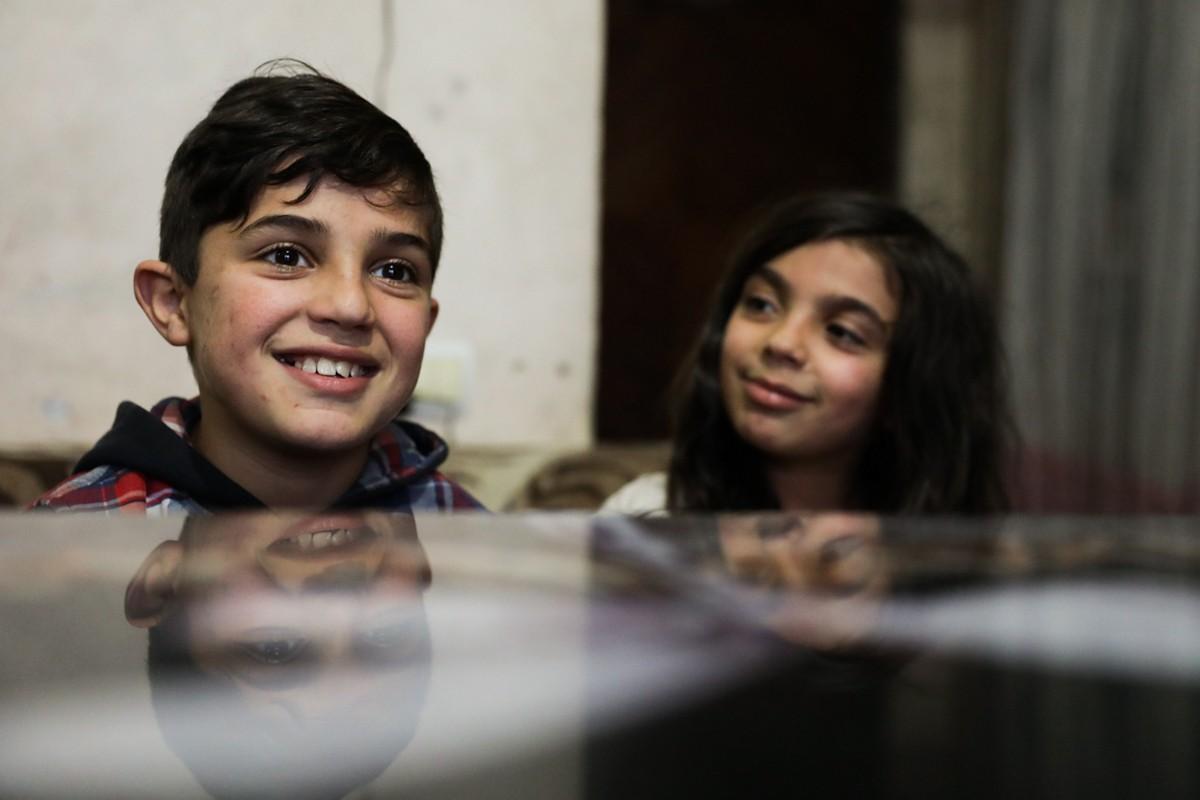 The 34 square meter space has been turned into two bedrooms and one living room-lobby.

I ask how the family fits in this small area. Mrs. Shaboyan smiles and says the boys are in one room, the girls are the other.  The little ones, along with she and her husband, sleep in the living room.

Instead of a gas stove, the family uses a 3 kg gas cylinder placed in the living room. It must be filled every three-four days. Meals for the thirteen-member family are cooked in a large pot. Mrs. Shaboyan says they can cook two kilos of rice at a time. They also buy 25 sheets of lavash bread daily. 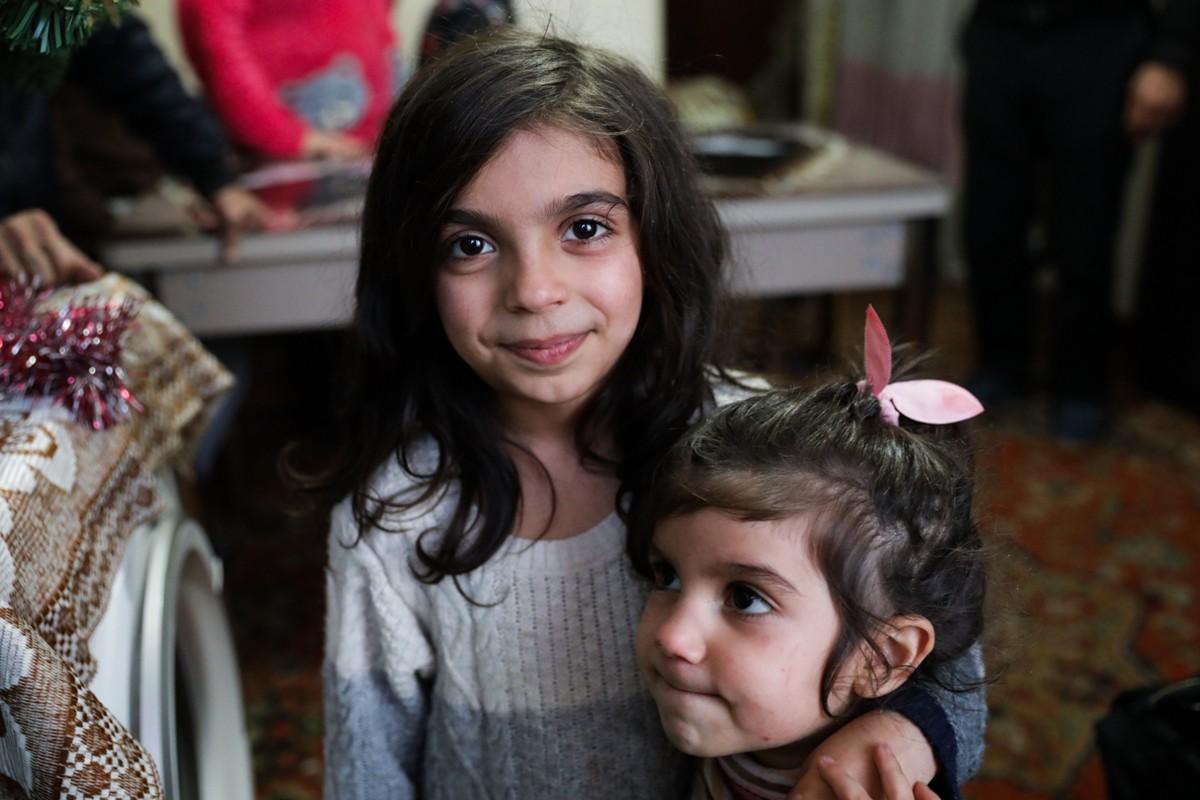 Seven of the children attend the Orran center.  Since the children are served meals at the center, the chore of cooking at home is lessened.

With such a large family, there’s only three months out of the year when there isn’t a birthday to celebrate.

Mrs. Shaboyan says they always buy a small cake, regardless of the family’s budget.

“Once, while walking home on my birthday, I saw the lights turned off. As I entered, I was greeted with candles and cake. It made me very happy. I am very grateful to my children that they appreciate the pain and suffering of the two of us,” says Mr. Shaboyan.