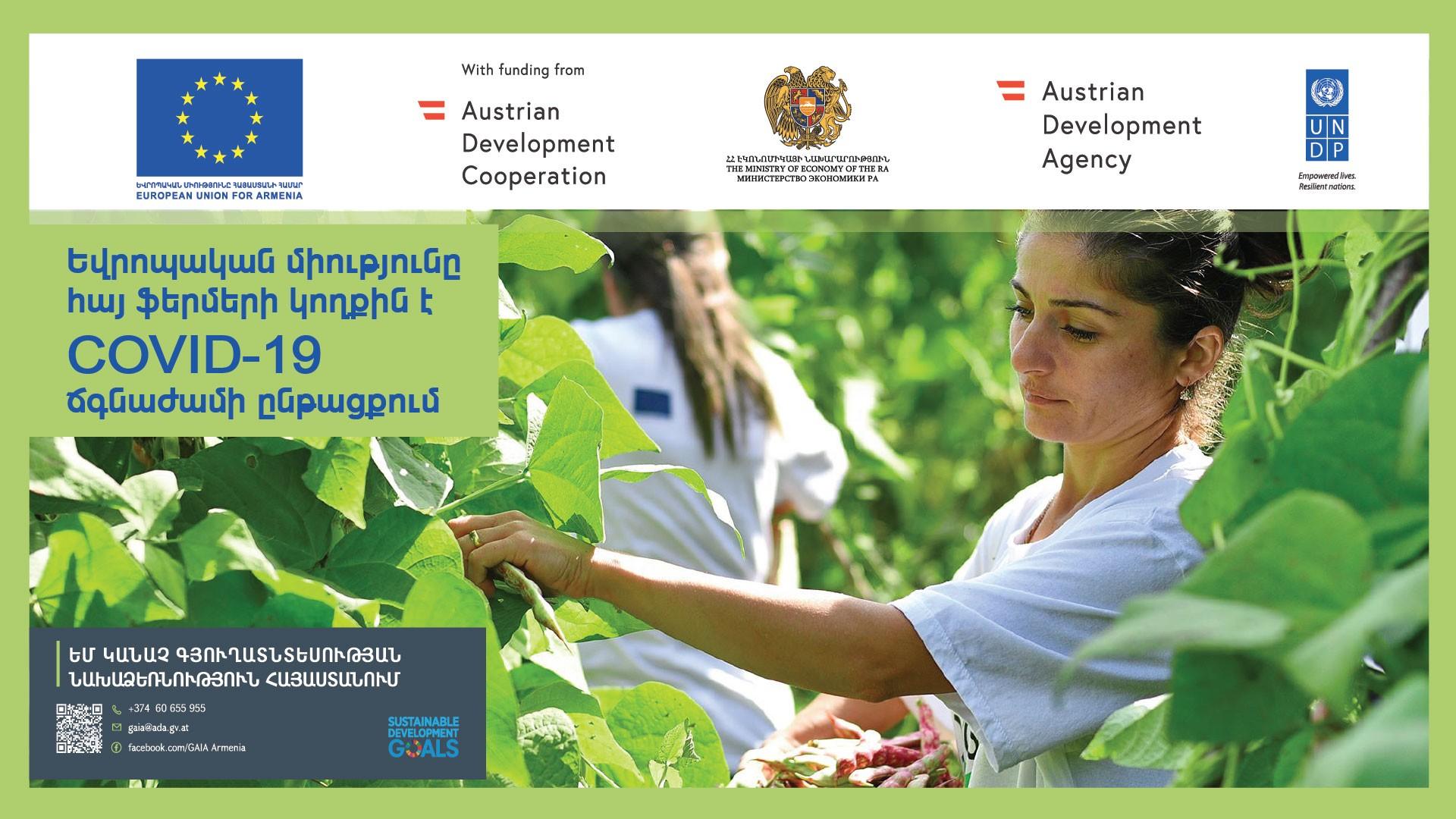 It will be allocated from the budget of the EU Green Agriculture Initiative (EU-GAIA) in Armenia project, funded by the European Union and co-funded by Austrian Development Cooperation.

This was announced at the meeting of the first Advisory Board of the EU-GAIA project, during which the plan of immediate measures to support farmers and producers at the outbreak of COVID19 was approved.

The list of specific activities offered by the project includes provision of two-wheeled tractors and seedlings, capacity building of government staff, provision of inputs, small agricultural equipment and tools, support to the post-harvest facilities, publishing booklets about existing programs of the Ministry of Economy, awareness of the safety rules of the virus during production, technical assistance (consulting with the help of remote professionals and the development of business models) to agri-producers – potential recipients of Government’s financial support with special focus on vulnerable groups.

According to the RA Deputy Minister of Economy Arman Khojoyan, the proposed actions are in line with the goals of the Sustainable Agriculture Development Strategy of the Government in a crisis situation; that is, to make Armenia's agriculture more efficient and resilient in the context of green economy development.

The presented short-term and medium-term measures will be financed within the framework of the EU-GAIA project current intervention logic and budget. The measures are aimed especially at the most socio-economically vulnerable groups in the current situation in the target regions of the project. The events were proposed and will be implemented by the Austrian Development Agency and the United Nations Development Programme in Armenia.

To summarise the results of the Advisory Board meeting, Andrea Baggioli recalled how the EU-GAIA intervention also considers climate change mitigation and adaptation measures: introduction of climate resilient seeds, sustainable management of natural resources and protection of biodiversity, promotion of resource-efficient (energy-efficient) technologies and renewable energy. To this respect, the Deputy Minister Melikyan’s proposal could well fit into a comprehensive assistance to mitigate the negative impact of the COVID-19 crisis in the agricultural and environment sector in Armenia: to launch the discussion on using large-scale tree planting in riparian zones and windbreaks, as a means of immediate socio-economic assistance to vulnerable groups; and to create synergies between the agricultural interventions and the water treatment plan in Sevan Lake region.

The EU Green Agriculture Initiative in Armenia is funded by the European Union (€ 9,7 million) and co-funded by the Austrian Development Cooperation (€ 2 million). The project is implemented by the Austrian Development Agency and UNDP Armenia. The Government counterpart of the project is the RA Ministry of Economy. EU-GAIA project will support the development of sustainable, inclusive, innovative and market-based agribusiness particularly in the northern provinces of Armenia – Shirak, Lori and Tavush. The project will be implemented over the course of three years.