According to Customs Service of Armenia data, it is the first time that Armenia has exported semi-finished jewelry of this value.

Hetq has been working with its Russian counterpart (Denis Lebedev at fontanka.ru, St. Petersburg) to find out the origin of the product and the exporter, the answers to which the Armenian Customs Service has persistently tried to keep secret. Nevertheless, we managed to find an exporter who assures us that the exported is refinished gold purchased from banks.

We learned about the export of this amount of semi-finished jewelry because of numerous inquiries based on the open data of the Customs Service. This information helps to fill in the gaps of the story.

Among the products with the highest customs value in the export statistics of Armenia for 2019, the product group "waste and scrap of precious metal or metal, coated with precious metal" appears.

According to the Customs Service of Armenia, in 2019, 163 tons of goods were exported from Armenia under this code, the total customs value of which amounted to about $88 million. Compared to 2018, export volumes increased 2.1 times, and customs value - 8.9 times.

The “7112” group ranks seventh place in the list of products with the highest customs value exported from Armenia.

It is noteworthy that in previous years, exports from Armenia under this product group were small in volume. In some years, for example in 2017, volume was noticeable, but the customs value was quite small, which suggests that in those years some waste and scrap were exported, among which was a small amount of precious metals.

In response to our inquiry, the State Revenue Committee (SRC) initially said that mainly waste and scrap of electronic tiles, autocatalysts and radio-electronic elements containing precious metals were exported.

The SRC’s reply contains no mention about   semi-finished jewelry items.

Later, after studying the export data, we found out that products of quite different price levels were exported under this code.

In particular, waste and scrap containing a large amount of precious but cheap metal was exported to EU countries: Germany, Latvia, Lithuania, etc. A total of 160 tons, $1.2 million, was exported. In other words, 1 kilogram was exported for about $8.

But at the same time, a rather expensive product was exported to Russia with the same code, which cost only $29 per gram.

The most remarkable part of this story begins with numbers on Russia.

As mentioned,  expensive goods were exported from Armenia to Russia under this product group. In particular, about 3 tons (2997.1 kg) were exported, the total customs value of which amounted to $86.7 million.

It turns out that one gram was exported for $29. And since it is unlikely that one of the above-mentioned products could have such a high value - scraps of electronic tiles, autocatalysts and other parts, we sent additional inquiries to the SRC

This time, the SRC responded that semi-finished jewelry items were exported from Armenia to Russia under this product group. It is not specified how much gold or other precious metals are in these semi-finished products, but only the price (gram - $ 29) already suggests that we are talking about expensive items.

By the way, we compared Armenian and Russian customs data for the digital indicators. They mostly coincide with small deviations, which is natural, as the country exporting the product calculates its value by a different methodology (at FOB prices), the importer by another (SIF prices).

However, when we tried to find the product data in the databases of the Eurasian Economic Commission with this code, we found that this code (71) is missing in the list of 2019 transactions within the Eurasian Economic Union.  Goods listed under codes starting with “70” are immediately followed by “72” codes.

According to the Russian Customs Service, the export of semi-finished jewelry from Armenia continued in January-February of this year.

In 2019, according to Armenia’s State Revenue Committee, one company exported jewelry from Armenia to Russia. Referring to Article 60, Part 3 of the RA Law on Customs Regulation, the SRC does not mention the name of that company.

The SRC provided a general list of companies that exported under this code 7112, showing that six companies did so. However, as mentioned above, the SRC does not specify which companies exported to Russia.

The Ministry of Economy could not, or did not want to, press the SRC for details

Hetq also contacted the Ministry of Economy about the three tons of exported semi-finished jewelry. We forwarded the Customs Service data to Gagik Mkrtchyan (an adviser to the Minister of the Economy) and asked him to ascertain where the batch originated, whether there are any legal violations, and which company exported the items.

A few days later Mkrtchyan replied that the ministry could not assist us in the matter because the State Revenue Committee did not provide them with information about the exporter, again claiming it is a trade secret.

In other words, when goods are exported from the country at an unprecedented price, the origin of which may seem suspicious, the Ministry of Economy is unable to find out what is happening since the State Revenue Committee closes the door on any pertinent information.

Hetq managed to find out that the exporter is Kentron LLC, a branch of Golden Heritage LLC. 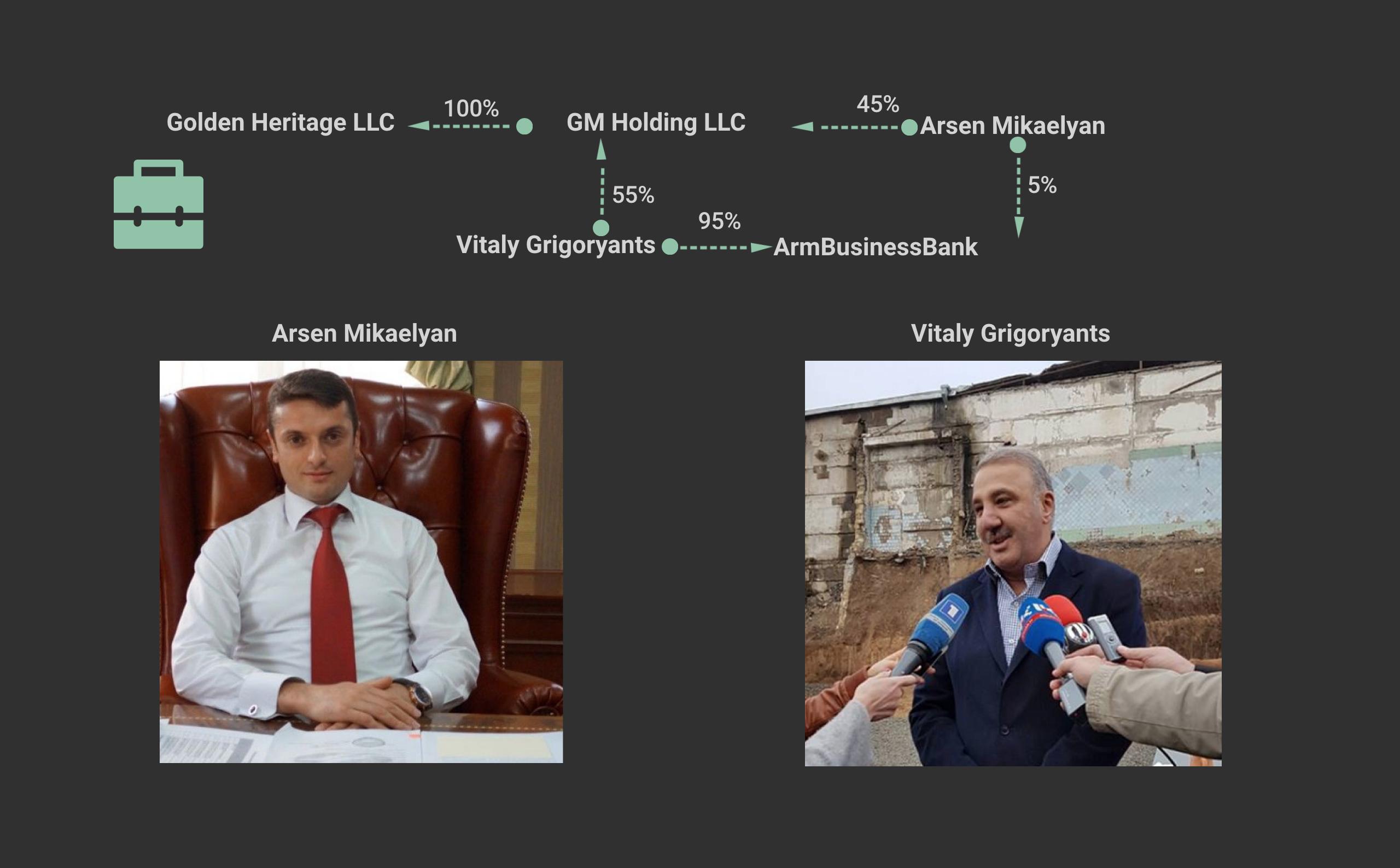 Arguing that such information contains trade secrets, he made no promise to reply.

However, one day after sending our request, we received an answer. Galstyan notes that the exported is processed bank gold. "Standardized gold bars are acquired from commercial banks, which are exported to Russia, a member of the EEU, in accordance with agreements with partners," the response reads.

We called Galstyan and tried to find out where that amount of gold was recycled and from which banks. Galstyan did not answer those questions, only noting that they operate within the law.

Here, too, the question arises if after recycling it has become expensive scrap metal waste, how can it be exported at such a high price?

For comparison, gold exported in the form of a doré alloy in 2019 was exported at an average of $38.4 per gram and under a completely different code.

In the last two years, up to six tons of gold (including gold powder - platinum galvanic coating) has been exported from Armenia annually. It is exported in the form of a doré alloy, part of which is silver. It is exported by GeoProMining Gold LLC, which operates Armenia's largest gold mine, Sotk.

According to the Armenian Customs Service, in 2019 Armenia exported 5.8 tons of gold, the customs value of which amounted to $224 million. It should be noted that the average price per gram of gold exports was $38.4. Compared to 2018, the amount of exports increased by 818 kg or 16%, and the customs duty - by $48 million or 27%. Most of the gold is exported from Armenia to Switzerland, and some to Italy. This has nothing to do with the semi-finished products we wrote about in the article, as they are exported under a completely different code.

In 2019, 2.5 tons of goods worth $114.5 million were imported to Armenia under the gold code. In 2018, about 1.8 tons (worth $73 million) was imported. Banks in Armenia mainly import gold, as do companies in the jewelry industry, which process the gold into jewelry.

Gold imported and exported to Armenia is qualitatively different. The exported does not undergo final processing. If Golden Heritage claims to have bought gold from banks, it is likely that the gold in the hands of the banks is imported gold, one gram of which in 2019 amounted to $45.6.

Given that Armenia often serves as a transit country for the transportation of various goods from one country to another, suspicions were raised that the three tons of semi-finished jewelry mentioned above were imported and later exported from Armenia. However, according to the Customs Service, no goods of that price were imported to Armenia.

And the other product group we looked is jewelry. This product group is also exported and imported under a separate code. In 2019, according to the Customs Service, about 8 tons of jewelry worth about $19 million were imported to Armenia (in 2018, 4.3 tons, about $17 million). It was imported mainly from Italy, the United Arab Emirates, Thailand and Turkey.

At the same time, 86.6 items of jewelry were exported from Armenia, the customs value of which amounted to about $43 million (in 2018, 52.38 tons were exported - $40 million). Armenia exports jewelry to Russia, the UAE, Turkmenistan, the United States, etc.

Thus, there are still unresolved issues regarding the export of 3 tons of semi-finished jewelry from Armenia. The exporter claims that it is gold purchased from banks and processed. Meanwhile, it is not exported under the code of gold or jewelry, but under “precious metal scrap”.

The State Revenue Committee, i.e. the Customs Service, is obliged to clarify this issue.