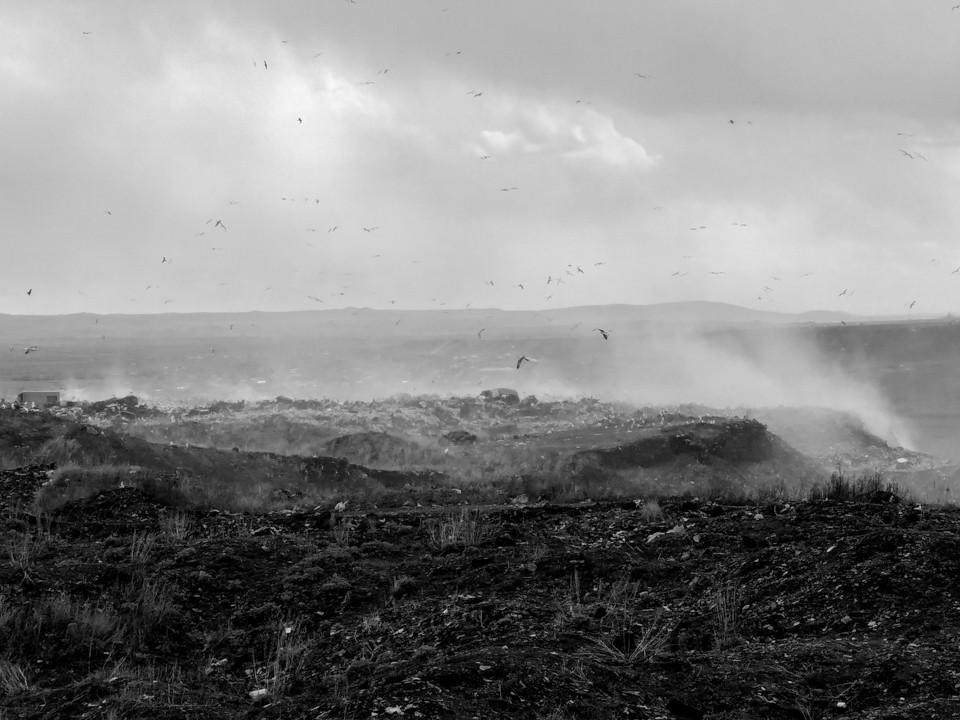 Gyumri’s Landfill Emits a Noxious Brew of Smoke and Stench

The terrain is rugged. The grass under my feet has just started to bloom between the remnants of household waste and rusty pieces of iron which has accumulated over the years.

I come across the deep foundations of buildings made of concrete, some full of construction waste. There are several abandoned houses as well. An old shepherd, wearing a worn-out military uniform, follows me with his somber gaze.

After climbing a few hills, I finally see the open landfill. The thick smoke envelops me as I approach. 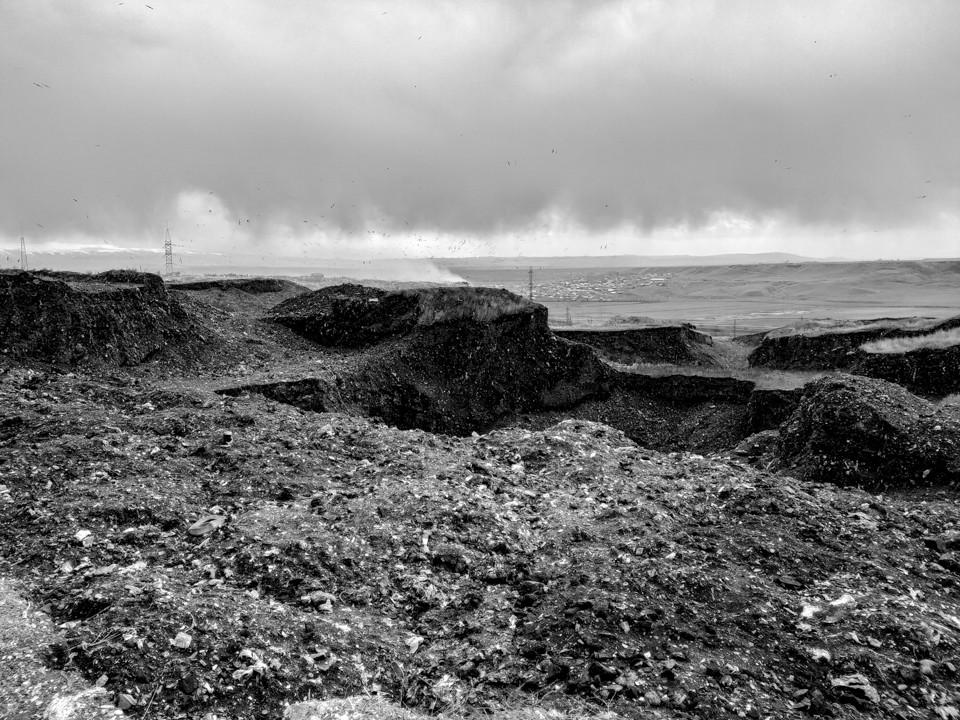 The landfill, located in the north-western part of Gyumri, was founded in the 1960s. The area occupies some nine hectares. The village of Hatsavan is clearly visible from here. Just below the hill, you can see the Akhuryan River.

Hundreds of crows and seagulls fly above me. The smoke burns my airways. Coupled with the stifling smell from the landfill, the smoke makes it almost impossible to breathe. I cover my nose with my jacket.

Gases deep within the landfill periodically ignite, resulting in dense yellow smoke. These flare-ups even occur when it’s raining. The landfill lacks the equipment needed to trap these gases. 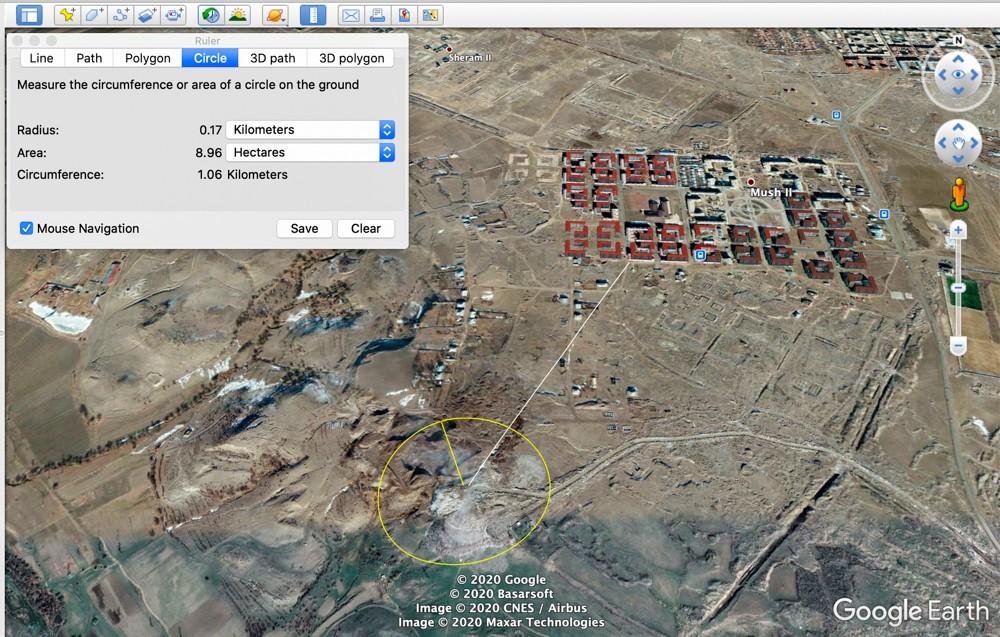 Finding a dump in Armenia that meets the technical requirements for the design and operation of landfills, adopted by the Urban Development Committee in 2009, is nearly impossible.

According to this document, landfills should "provide protection of the atmosphere, soil, surface and groundwater from pollution, preventing or reducing the harmful effects of waste on human health and the environment." In practice, it’s quite the opposite.

The Gyumri landfill is usually pressed with road rollers or tractors and sometimes is covered with a layer of soil. That’s what I saw from afar - the silhouettes of men working with shovels and a tractor slowly crawling over the landfill.

The Mush District is just 800 meters away from the landfill, and the district called Rancho is right next to it. There are residential buildings in Mush and houses in Rancho.

I meet Victoria Adamyan here. She and her husband have been living in a one-story house in Rancho for the past twenty years. She says the smoke has increased over the past five years.

"It is impossible to open the doors and windows in summer. If the wind blows this way, the smoke and the smell fill the house. We can't breathe,” Victoria says.

She says it is no longer possible to stop the smoke. Other Rancho residents have informed the municipality about the problem several times. The local authorities respond that they can't do anything about the smoke and the flare-ups are manageable.

"Because of the landfill, there are more stray dogs here now. They can become aggressive. Fifteen dogs attacked me once when I was coming back from work. I somehow managed to get to the house,” Victoria tells me. 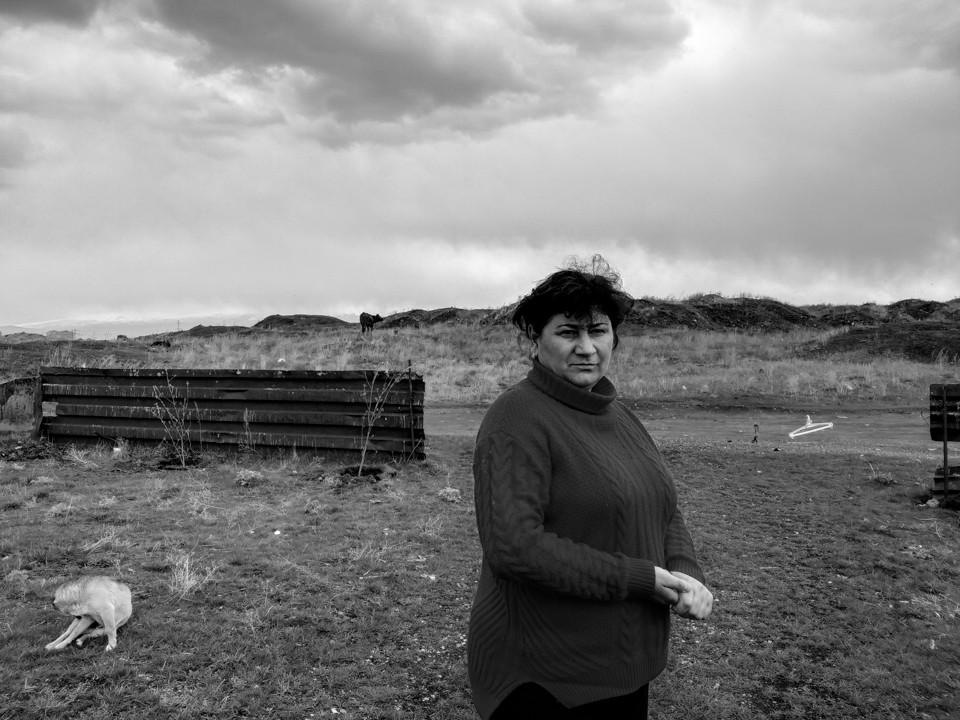 Ara, whose house is right near the landfill, told me there used to be less smoke in the winter. The landfill has since expanded, and the weather doesn’t matter anymore. Smoke still emanates from the landfill regardless of the season. Ara told me people from Mush have also complained about the smoke, but to no avail.

Armenuhi Avagyan, a member of the Gyumri Municipal Council, says the municipality has recently purchased a caterpillar tractor used to cover the landfill with soil and thus reduce the smoke.

"I can't really say how often it is done (covering the landfill with a layer of soil - ed.) or whether it is done at all. I suppose they just compress the landfill, which, of course, is not enough,” Vardanyan said. She promised to raise the smoke issue at the next council session, which she did a few days later.

In response to Vardanyan’s question, Gyumri Mayor Samvel Balasanyan (who’s served as mayor since 2012), said that there is a possibility of building a new landfill in the area adjacent to the community of Beniamin.

According to Balasanyan, a solid waste management program is already being implemented in Yerevan and Abovyan. Apparently, he was talking about a loan project provided by the European Investment Bank and the European Bank for Reconstruction and Development in Yerevan and Kotayk.

“Maybe one day our turn will come, and we’ll close that landfill. The new one will be in Beniamin… It seems to me they will do it in Gegharkunik and Shirak next, so it seems it’s in the upcoming plans,” Balasanyan said.

According to "Biosophia" environmental organization President Gevorg Petrosyan, the problem will not be solved by creating a regional landfill in Beniamin since the current model of creating and operating landfills is outdated.

"Today, governments worldwide are spending a lot of money on decreasing the amount of waste. All the waste that is possible to recycle is removed i.e. no plastic bottles, aluminum, wood, or glass is taken to the landfill. As a result, only organic waste remains, and composting is a safe process without any smoke,” Petrosyan said

These satellite images show how much the total area of the landfill has increased over time. On the left is the image from 2002, and on the right from 2018.

Gyumri Communal Service, run by the municipality, is responsible for garbage collection in the town. Company Director Vardges Samsonyan told Hetq that they use the newly purchased caterpillar tractor to cover the landfill with a layer of soil more frequently.

"They came and checked whether the smoke posed any danger to residents or not. They concluded that the smoke corresponds to safety norms," Samsonyan said.

The Inspectorate, however, in its response to Hetq’s inquiry, disagreed with Samsonyan’s claims.

Thus, the smoke emitted daily from the landfill is poisonous. Phenol and ammonia are extremely dangerous to health and can cause serious respiratory and cardiovascular diseases.

The extent to which the health of Victoria, Ara, and their family members, have been impacted by this smoke remains unclear. No such research has been conducted.

According to Petrosyan, if Armenia does not soon start sorting and recycling its garbage, increasing consumption will simply force authorities to constantly create new landfills. This is not a sustainable solution of the problem.

While the Gyumri authorities wait for the implementation of the above-mentioned funding programs, and sector specialists continue to raise the alarm about the risks the landfill poses, the 5,000 people living in the Mush and Rancho districts have no option but to daily breathe the toxic air around them.