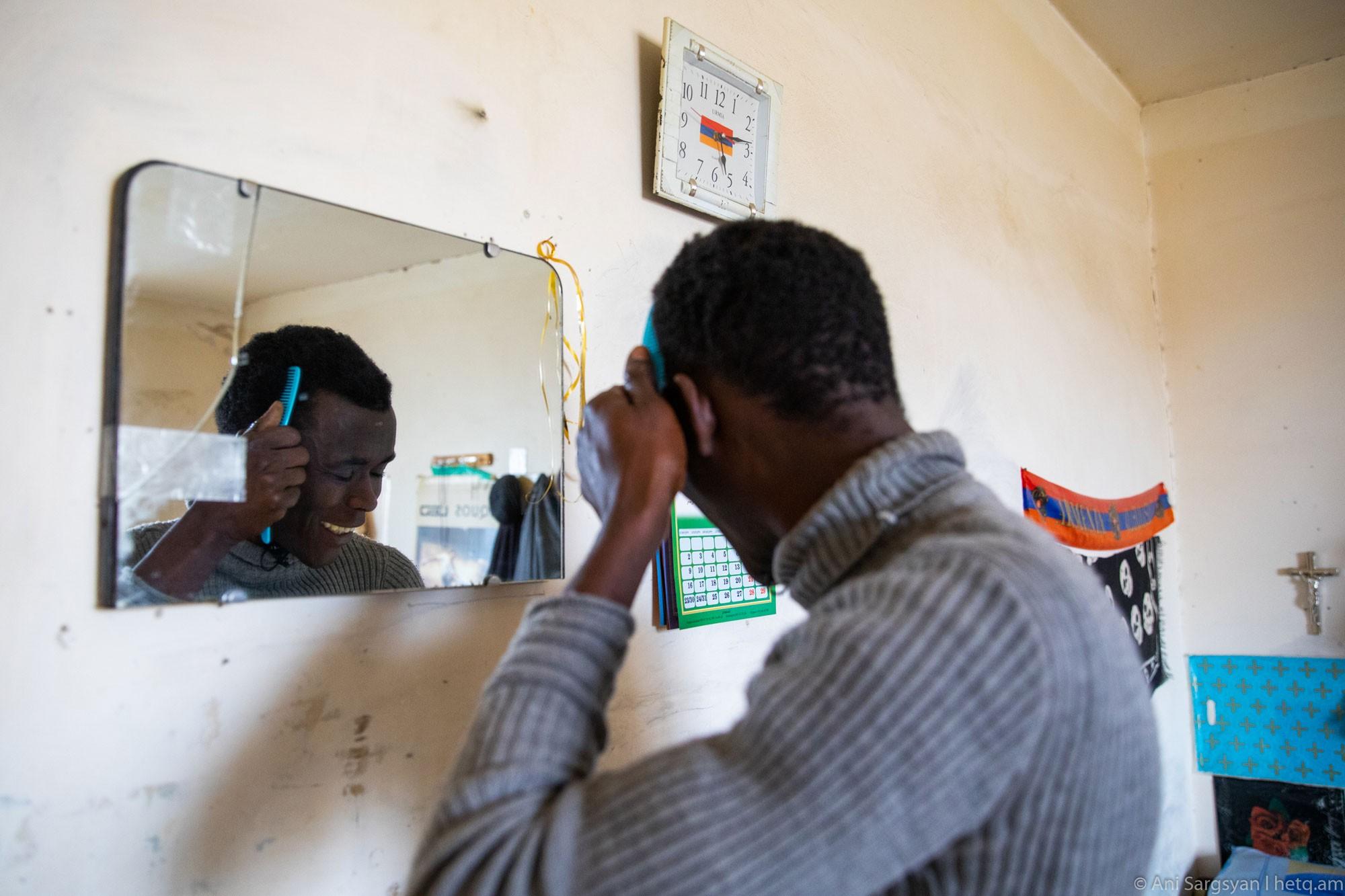 Abdul’s Odyssey from Guinea to the Vardashen Homeless Shelter: “I love Armenia.”

The Vardashen homeless shelter, on the outskirts of Yerevan, is crowded.

Adbul stands out immediately. He’s always busy doing this or that.

"Abdul, help us lower this." "Abdul, put this stuff up there." "Abdul, take this to the kitchen." "Abdul..." He helps everyone. He takes it all in stride, never refusing a request.

2018 Abdul left his native Guinea on August 8 and arrived in Iran. Then, as he says, he crossed the Arax River on foot into Armenia.

There were difficult events in Abdul's life, which prompted him to leave his homeland.

Abdul says that polygamy in his native country often creates problems within the family when a husband dies. The surviving women and children often do not see eye to eye and intense conflicts arise, sometimes leading to physical persecution.   Abdul’s father had three wives. After his death, the three wives were irreconcilable, and the children had a strained relationship. The father's first wife has four children. His mother is the third wife. Abdul has two sisters and one brother.

The children of the first wife tried to force them to sell their property, including the small house left by their father, where they lived, although the first wife and children had a bigger house. Abdul refused, because he was the only person in the house who had received an education. He held the documents of the house, and he dealt with those issues. He was constantly involved in arguments and fights, realizing that his life was in danger because he had been the target of three assassination attempts. He decided to leave Guinea to end the dispute over the house.

Abdul left his mother, brother, wife and two children at his father's house (the third was born after his departure). He tried to arrange travel documents with the help of his friend's father and get a Turkish visa, but when he received the passport, he saw that an Iranian visa had been issued. The man promised to take Abdul from Iran to Turkey. Abdul paid him in advance for the service.

In Iran, the person who accompanied a group of people wishing to travel to Turkey tried to take them across the border illegally at night. There were people from Bangladesh, Pakistan, and Afghanistan in the group.  Abdul was the only black person in the group. 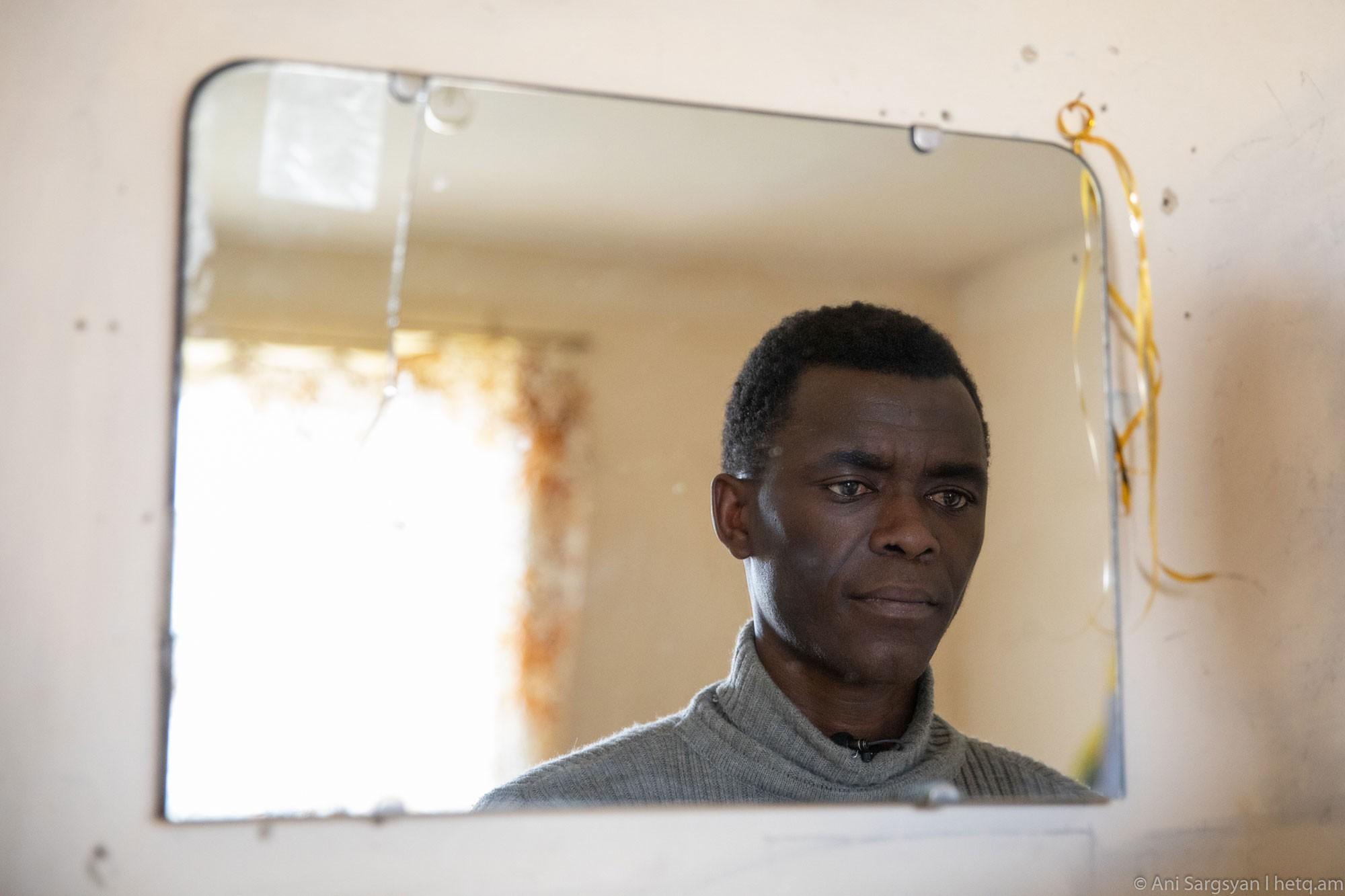 "They said they would kill me if I didn't keep walking with them. I was very scared because I had left one problem in Africa and now, I was facing a new one. I had to follow them because I didn't know where to go and where to go back to. We continued and we got to a place where there was a barrier. We walked and walked. I realized that the way we were going was not legal. We walked from morning till 23:00 at night. It was dark and the surroundings were not good, I stayed back for a while. I sat next to them, I let them pass. I spent the night sitting there. At 6 in the morning, I saw that I was near a river. I didn't want to continue the way they had gone. I chose another way to find help. I continued to walk along the river, and I went in where it wasn't deep,” Abdul recalls.

Abdul does not know what part of the Armenia-Iran border he crossed. He only knows that he had seen people working in the field. He approached and asked for something to eat because he hadn't eaten for the previous two days. One of the men understood from the gestures that he wanted something to eat. Abdul was given some cookies and water and told him to wait.

"I had no idea where I was, but I wasn't afraid," Abdul says.

The man in the field shortly returned with some police. After questioning Abdul, they checked the entire border to make sure no other people were with him.

"I said I came to ask for help and that I didn't cross the border on purpose.  I crossed by accident, not knowing that there was a border there," Abdul says.

Abdul was taken to Yerevan, interrogated, and his documents checked. He was taken to a hospital for tests. A blood sample was taken. He spent the night in the hospital. In the morning, the documents were returned to him and he was taken to the Vardashen homeless shelter. 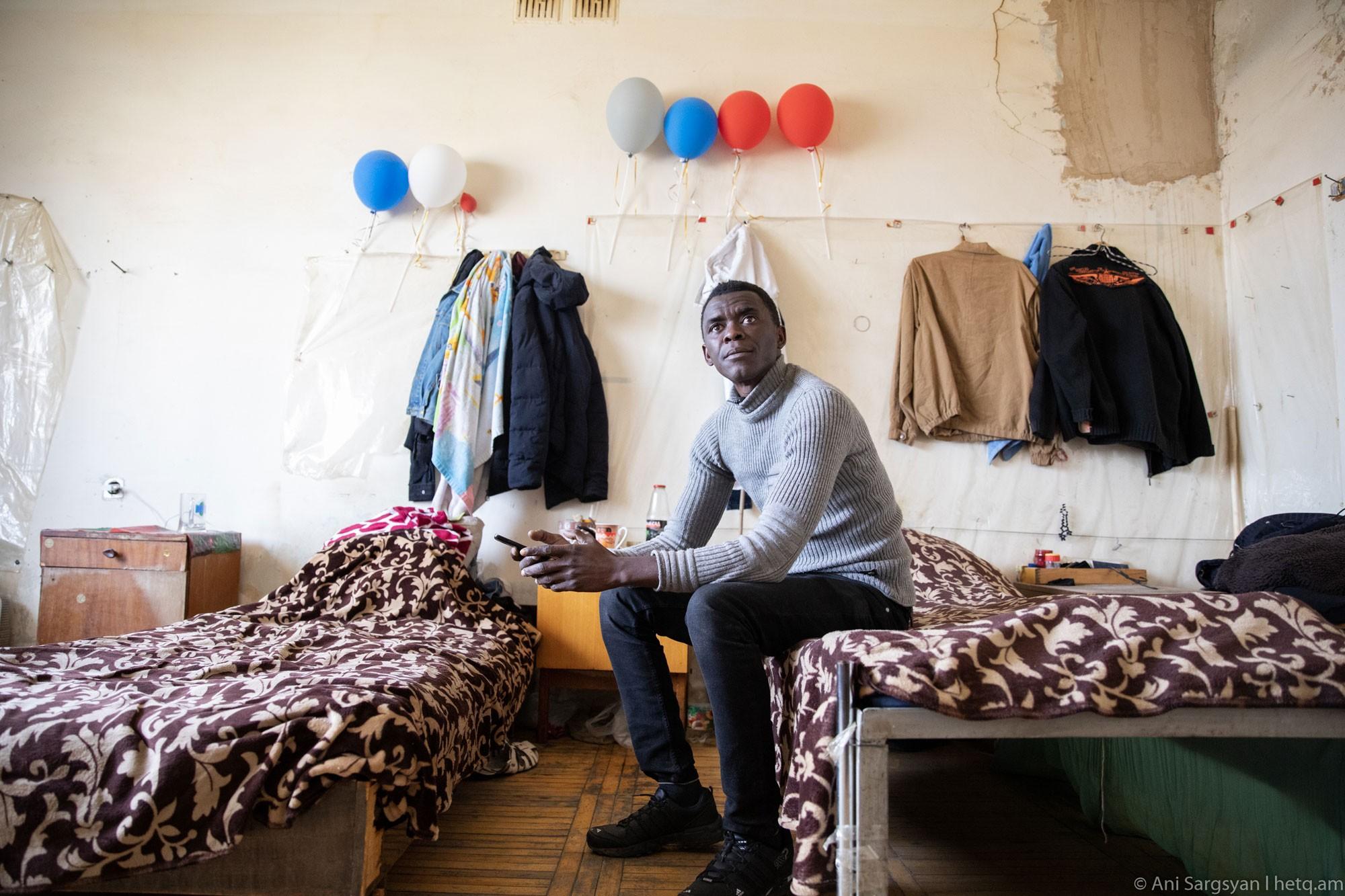 Abdul’s room in the shelter

Abdul believes that he was not detained for illegally crossing the border. He says the police interview made clear that he did not cross the border intentionally.

"Armenians did not know me, the police did not know me. As a result of our conversation, after checking my documents, they made sure that I did not cross the border on purpose, I left my country legally and reached Iran. There were people in that group who didn't even have a document with them,” Abdul says.

Abdul studied Mathematics and Informatics at the University of Guinea. He worked for seven years in a disposable plastic goods factory.

The shelter arranged for Abdul to take lessons to become a hairdresser. He took the courses but was never sent to a salon to work.

Abdul says that the person in charge of the hairdressing salon sent all the Armenian students to work in the salon and gain experience, but not him, arguing it was too early and that Abdul’s Armenian wasn’t up to snuff.  Abdul decided to drop out of the program and find other work because his children back home needed his care.

Abdul then got work at a bowling club in Yerevan. He was never paid. The experience failed to dampen his spirits.

"I have problems where I came from. Here, despite the difficulties, I have no serious problems. Nobody wants to kill me here,” Abdul says.

He now works in one of the supermarkets on Yerevan’s Leningradyan Street for 80,000 drams ($166) monthly. He also sends some of his wages to his mother to take care of the children.

Abdul says he wasn’t worried when leaving the family because he was the one targeted by his brothers. However, three months after his escape, they attacked his sister. She soon left Guinea and went to Egypt.

In 2019, civil strife broke out in Guinea, forcing his other relatives to leave the country. The second sister left for Morocco. The whereabouts of his brother are unknown. The mother took refuge with her two children in Senegal, and the youngest child is still in Guinea with his wife.

Abdul wants to stay in Armenia, to work, and to bring his two children and mother here. He does not know how to organize the move, but says he is ready to work hard and earn more money to solve these issues.

"I want to go and work in two places. I have nothing to do, I want to go to work, I don't want to stay home,” he says. “I think that with the help of Armenians I can get out of this situation. I have to thank Armenia, because wherever you go, when you apply your basic education, the upbringing of your parents, people understand and reciprocate in kind. Wherever I go to work, they love me, even in the Vardashen shelter. They treat me very well.”

Abdul says that a review of his application to remain in Armenia has been extended every three months. He required to appear and submit his documents every time. This upsets Abdul because the paperwork gets him fired from whatever job he’s doing at the time. He wants to be allowed to stay in Armenia for at least one year to get the paperwork done and not get laid off anymore. 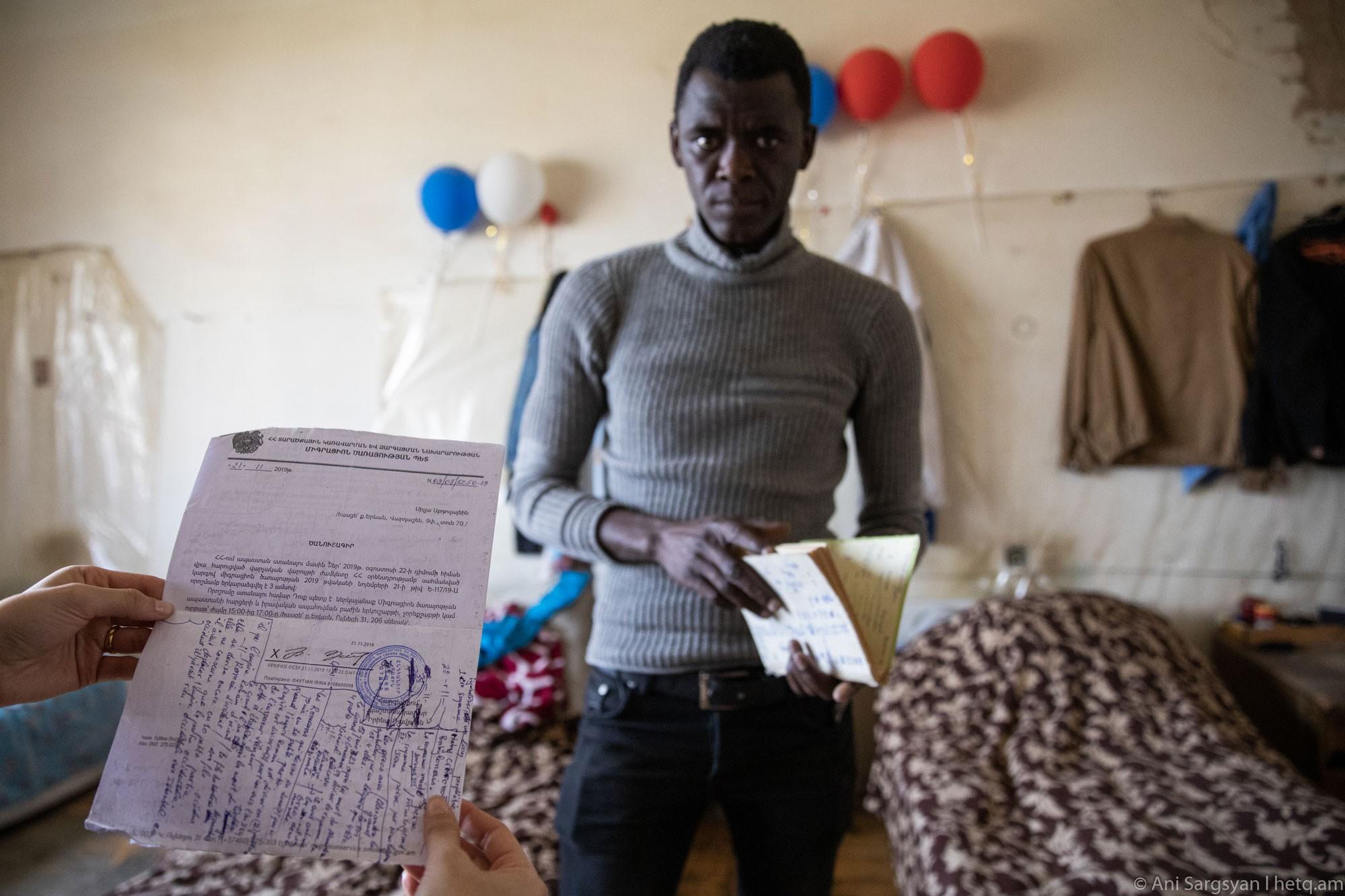 One of the Armenian Migration Service documents

"It may seem ridiculous to Armenians, but I am in Armenia and I want to become an Armenian. I love Armenia. Even if I stay in Armenia for ten years without documents, nothing will change. If I am treated well here, I will stay in this country. If you ran away and were saved, you can't be ungrateful. Armenia saved me. I would like to have a good job in Armenia and help my family,” Abdul says.

Abdul already speaks Armenian and is learning to read and write.

When asked how he’s coping with the coronavirus situation, Abdul answers in Armenian ․

"I always take care of myself so that we can pray to God that the virus will not increase in my beloved Armenia."

Annie Simonian Totah 2020-05-28 23:13:32
This is a very moving story and Armenia has been great to welcome him. Since his background has been cleared, as mentioned in the article, I strongly recommend that his working papers be validated annually instead of quarterly. Also if he wants to live in Armenia, work hard without being a burden on the government and bring his family to join him, Armenia should allow him and help him to do so. Armenia is moving towards being a more democratic nation, and if unemployment is not in crisis mode, then our homeland should open its borders to welcome righteous people, just like Israel does. I also would like to send some finds to Abdul to help him temporarily with his financial needs. Can you please direct me to the proper organization to ensure that my donation goes directly to him and is not lost in the transition. Thank you very much and I look forward to hearing from you.
Tlkatintsi 2020-05-24 17:52:38
Wishing him well!
Anna hakobyan 2020-05-22 23:33:46
Իհարկե պետք է ապրելու իրավունք տալ երիտասարդին,եթե ոչ ,մենք ուրեմն մարդասեր ազգ չենք ,ինչպես որ խաղում ենք։
Գևորգ Մկրտչյան 2020-05-22 22:12:42
Բարի գալուստ ։
Ռիտա 2020-05-22 10:02:37
Բարև ձեզ։ ես ուզում եմ օգնեմ սիլա աբդուլային։ նրա հետ կոնտակտի կհան՞եք ինձ