Russian businessmen and oligarchs operate most of Armenia’s mines and pocket a lion’s share of the profits derived from them.

Armenia has issued operating permits for twelve gold and gold polymetallic mines, which we we’ve covered in previous articles.

Here, we'll look at who actually owns Armenia’s other mines, those mainly produce copper and molybdenum.

As a result of the legislative changes made within the framework of the Transparency Initiative, the names of the real owners of metal mines in Armenia have been published in the State Register of Legal Entities of the Ministry of Justice. However, they do not fully reflect the identity of the real owners. The legislation bypassed one mine operator and did not present its declaration.

Syunik’s Kajaran copper-molybdenum mine is operated by the Zangezur Copper and Molybdenum Combine Closed Joint Stock Company (ZCMC) Joint Stock Company. Once Armenian legislation mandated that the names of the real owners of mining companies be published, the German Cronimet group disappeared from the ZCMC’s shareholders’ list.

The ZCMC, in its 2019 financial report, noted that it had repurchased its securities owned by Cronimet Mining AJ (60%), the 15% owned by Pure Iron Plant OJSC, and the 12.5% owned by IMF Holdings LLC Group and Zangezur Mining LLC Group.

As of December 31, 2018, the group was controlled by Gunter Pilarski. Since the repurchase of securities in December 2019, the company has no final controlling shareholder.

New shareholders were registered in 2020 ․ Thomas Peter Heil of Germany acquired 12.5% ​​of the shares on March 27, 2020. He is also chairman of the board. Thomas Peter Heil’s workplace is C2Capital GmbH. It was registered in Germany in January of this year, and there no other details are available. The internet has little information on Heil.

Zurabov is a Russian politician and diplomat. From 2004-2007, he was an advisor to the Minister of Health and Social Development of the Russian Federation, and then worked as an advisor to Russian President Vladimir Putin from 2007-2009. From 2009-2016 he served as Russia’s Ambassador to Ukraine, as well as the Putin’s Special Representative for the Development of Trade and Economic Relations. Zurabov now represents the Moscow Joint-Stock Insurance Company JSC.

On the same day, Armenian citizen Narek Ambaryan, (the first deputy director general of ZCMC), acquired a 2.5% share. He’s the brother of Tigran Ambaryan, a second-tier adviser to the Justice and Deputy Military Prosecutor. Prior to this, Tigran Ambaryan held the position of Head of the Department for Crimes and Corruption in the General Prosecutor's Office.

That same day, Karen Alberti Hakobyan acquired a 2.5% share as well. share of 2.5%. He’s the general director of the Pure Iron Factory OJSC and the brother of former Syunik Governor Vahe Hakobyan. 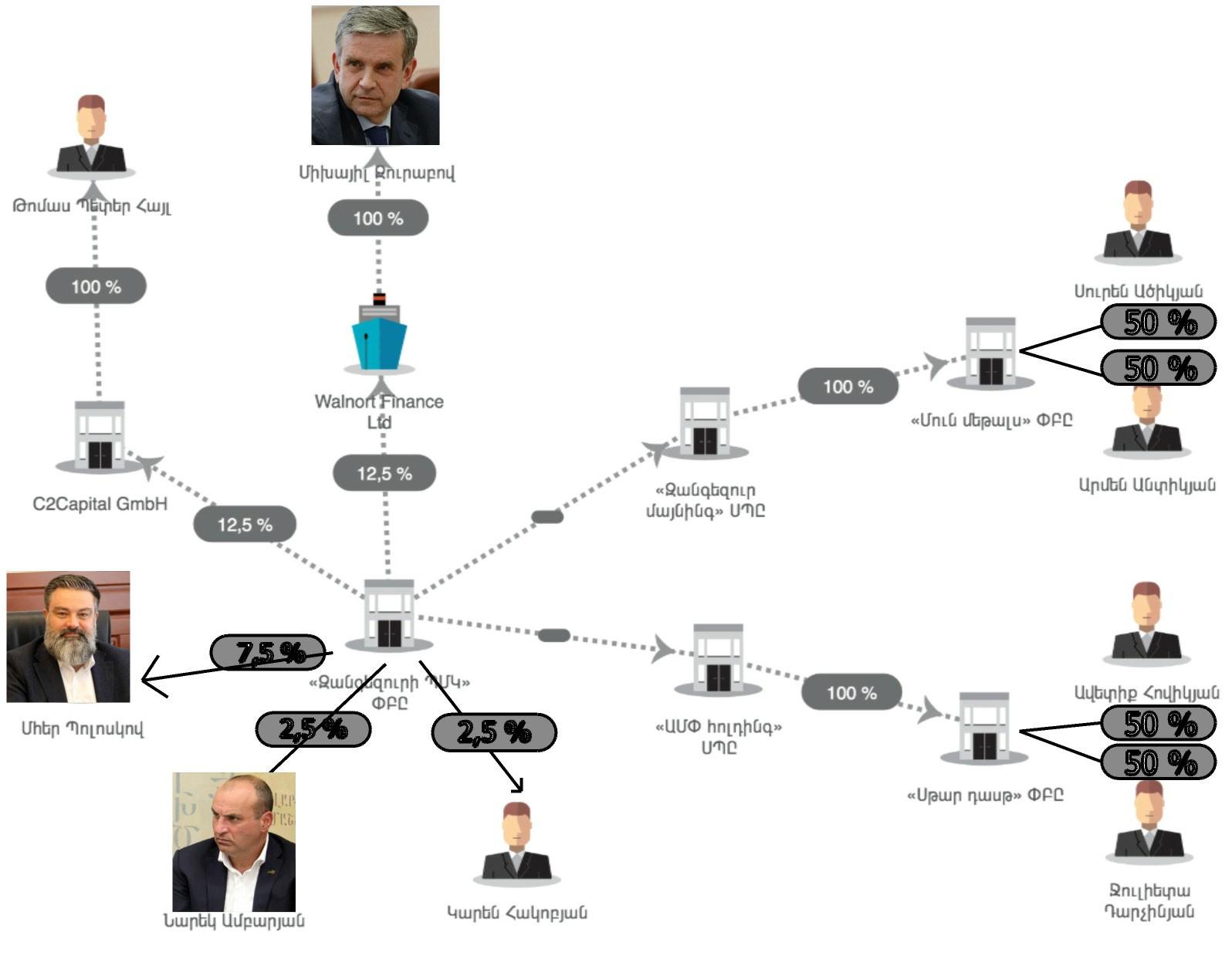 Although the new legislation does not mandate that the names of the real owners be made known if they own less than 10%, their names are reflected in the declaration of real owners.

It turns out that only 37.5% of ZMCM shareholders were made known to the public.

The declaration notes that ZCMC owns 62.5% of the shares issued by it. The company’s charter notes that a reserve fund has been established in ZCMC in the amount of 15% of the authorized capital.

Former Syunik Governor Vahe Hakobyan is also included in the list of real owners. The number of shares he owns isn’t listed. He is a member of the ZCMC board.

The list also includes German citizen Parag Johannes Bhatt, who is also a board member.  He is President of the Austrian CMA Corp Ltd.

Moritz Jonathan Hieronymus Hill, a German citizen, is also listed as a ZMCM board member.

The ZCMC and related metal mines

The ZCMC is the 100% shareholder of Ler-Ex LLC, a company licensed to operate the central site of the Hankasar Copper-Molybdenum Mine. Ler-Ex LLC no longer operates the mine.  The company was granted a 22-year mining license in 2008. Reserves of 13,582 tons of molybdenum and 5,640 tons of copper have been found at the mine.

Since Ler-Ex stopped operating the mine in 2014, it’s unclear why the company’s permit hasn’t been voided.

The ZCMC’s 2019 report states that 2.4 billion AMD of assets tied up in the Hankasar mine have been written off.

Another abandoned Syunik mine is the Litchk copper mine, that ceased operating when newly elected Armenian PM Nikol Pashinyan ordered that the country’s mines be inspected.

In 2018, after the cessation of operations, Aram Safaryan obtained 50% of the company. 48% is owned by Mikhail Magilevsky, an Austrian citizen who works at the Swiss Industrial Minerals S.A.

Examining the website of this Swiss company, it’s fair to conclude that was set up to play an intermediate role, to hide the identity of actual shareholders, and to redistribute their money.

The head of the executive body of the latter and the final shareholder is the same Magilevsky, with his partner. Magilevsky is obviously not a real shareholder, but just a proxy used to conceal the network of actual owners.

Suren Atsikyan is one of the shareholders of Red Metals CJSC (1%). Linne Mining LLC owns the other 99%.

The connection between this mine and the ZCMC has already been covered via the intermediate Red Metals CJS and Linne Mining LLC. Thus, it appears that this is the second mine that the ZCMC tried to operate and finally abandoned.

Tatstone LLC has a permit to operate the Teghout section of the Aygedzor copper-molybdenum mine. The permit was issued on the same day the company signed the Litchk mine contract. The Aygedzor mine is also not operating.

On May 7 of this year, the Armenian government placed a freeze on Tatstone shares.

Agarak Copper and Molybdenum Mine to Russian Oligarchs 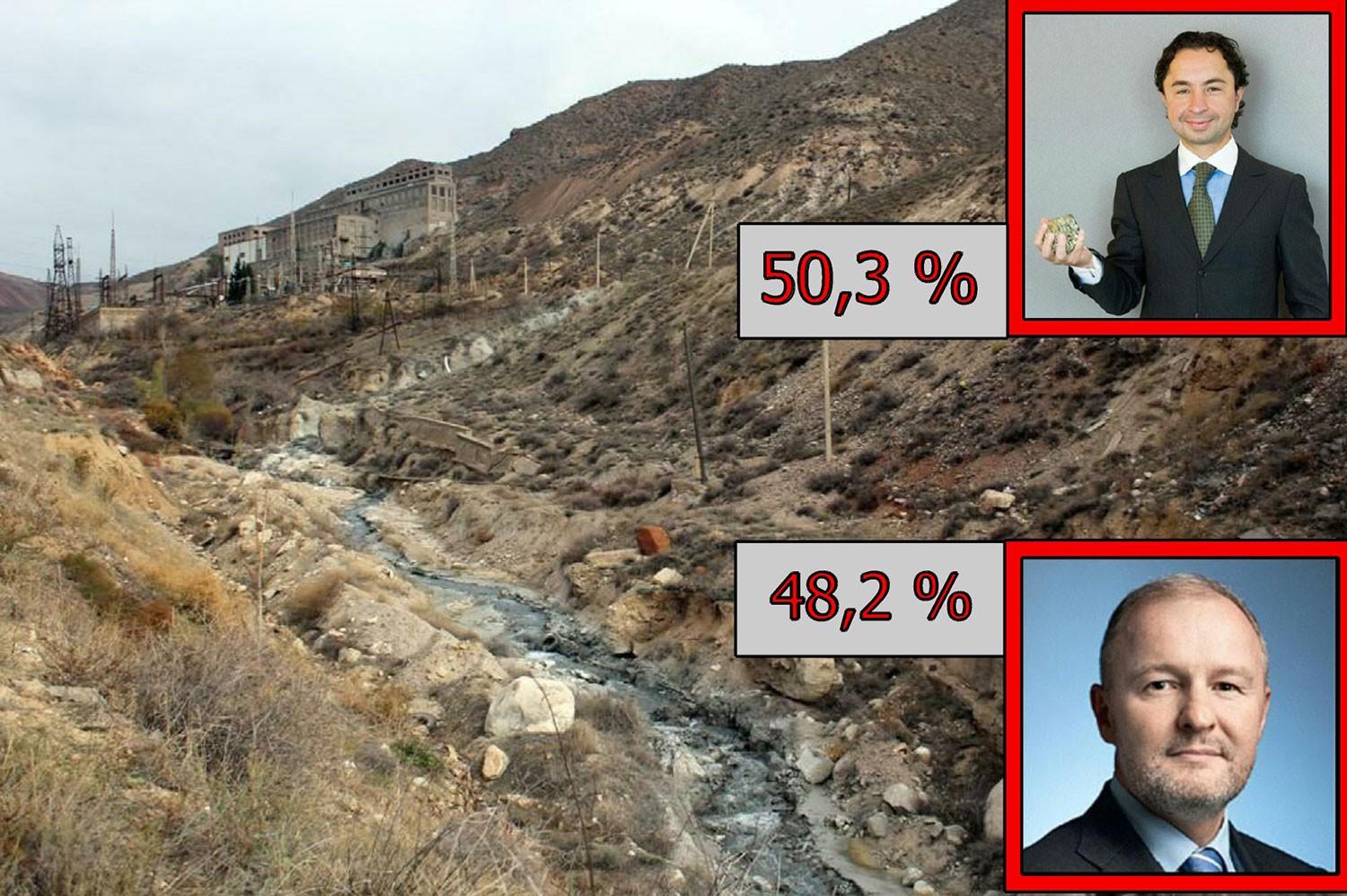 The Agarak copper-molybdenum mine is the next largest operating mine.

It’s run by the Agarak Copper and Molybdenum Combine (ACMC) CJSC, a holding of the Russian GeoProMining Group, and is in the hands of the same owners as the Sotk gold mine. 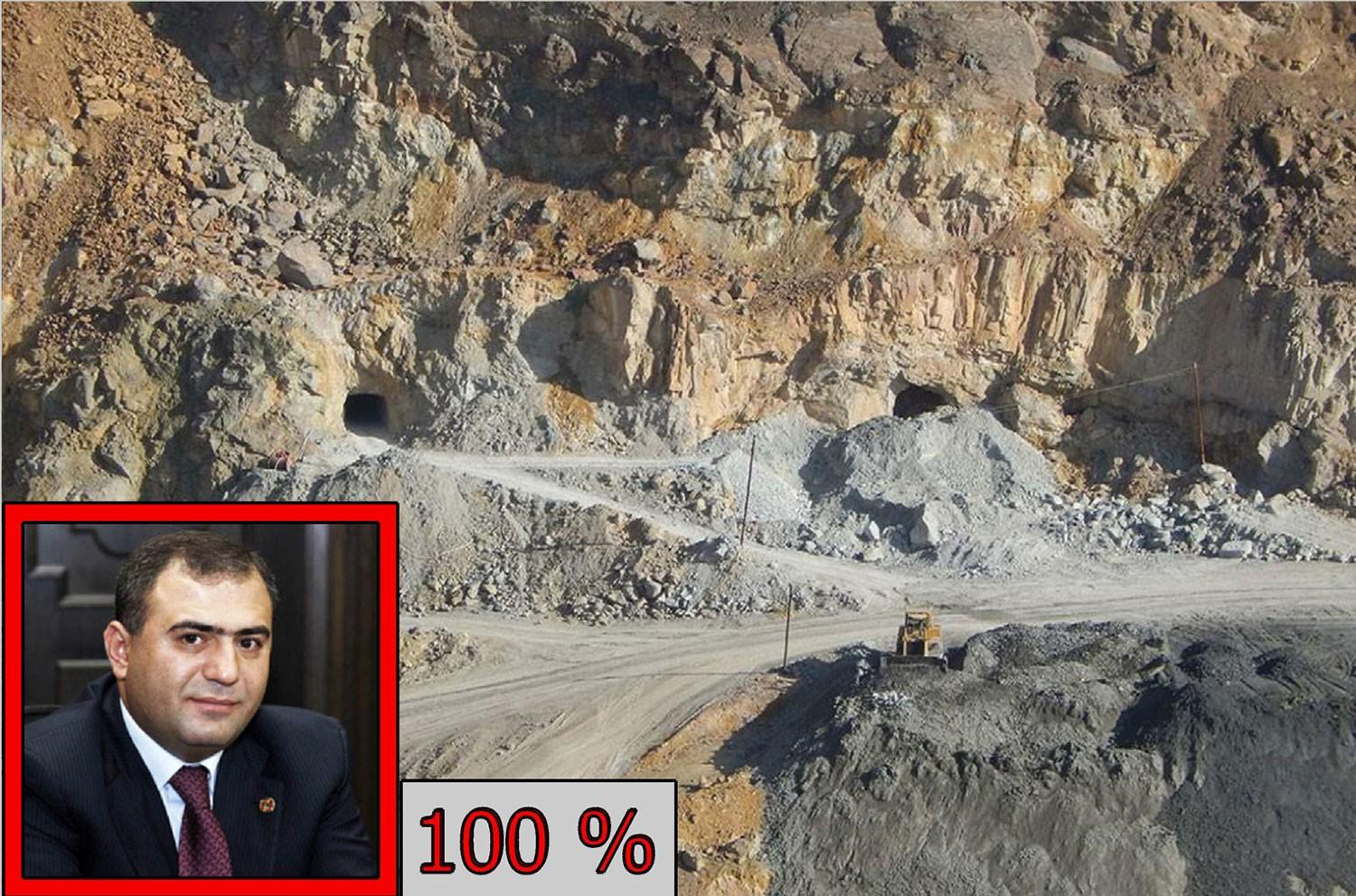 Akhtala Mining and Processing Plant CJSC has a permit to operate the Shamlugh copper mine. The open pit section currently isn’t operating but the company continues to extract ore from the closed mine.

In July 2019, former Syunik Governor Vahe Hakobyan became the sole shareholder of the company on July 10, 2010.

Vahe Hakobyan is the son of Maxim Hakobyan, who once played a pivotal role in Armenia’s mining sector.  Maxim was the chief executive officer and 12.5 percent shareholder of the Zangezur Copper Molybdenum Combine (ZCMC). In the spring of 2014, when ZCMC was 60 percent owned by the German Cronimet Mining company, Maxim Hakobyan was dismissed as chief executive officer 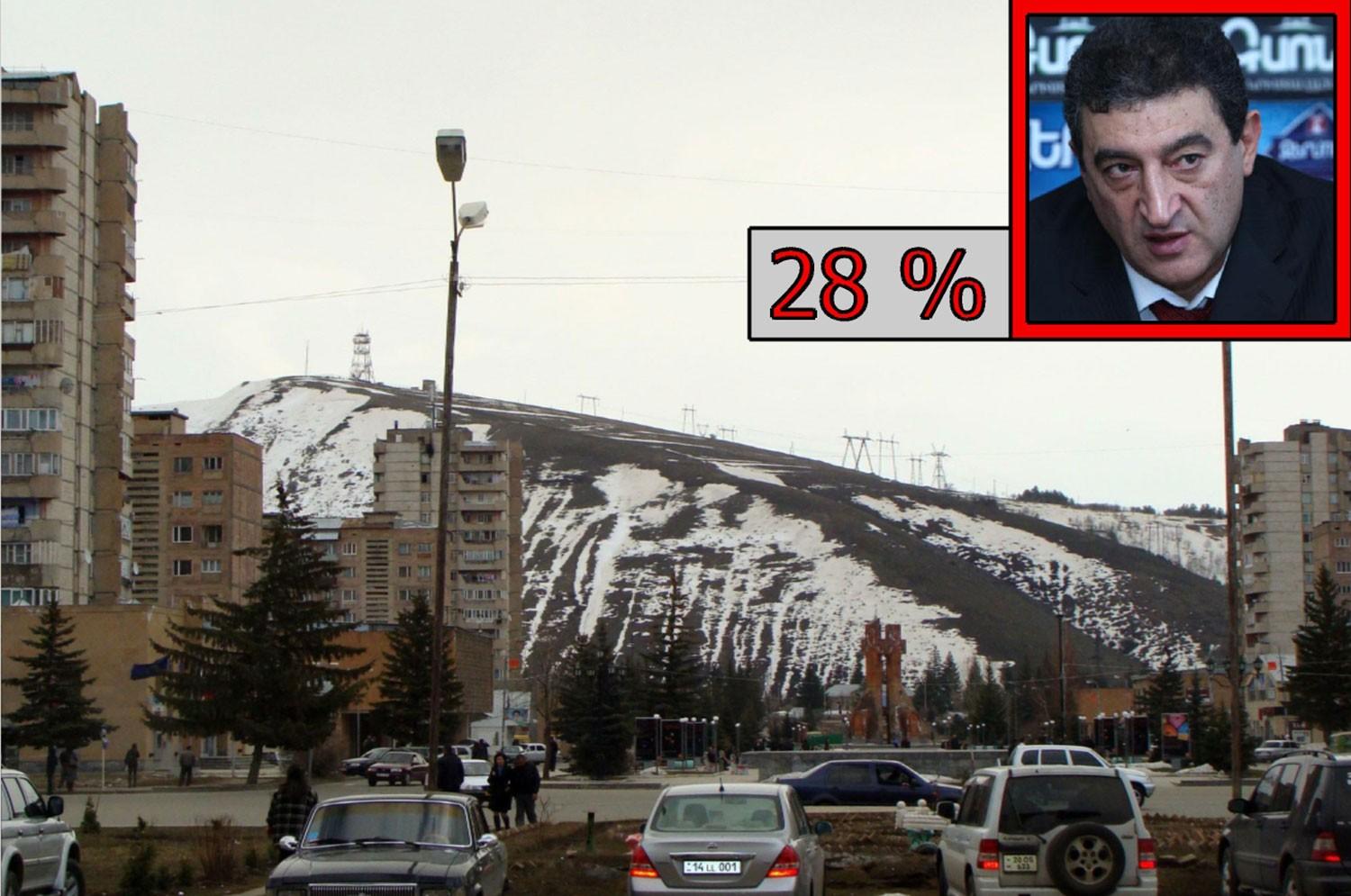 A company called Fortune Resources has been issued a permit to operate the Hrazdan iron mine.

Suren Ayvazyan, son of former MP and former Minister of Nature Protection Vardan Ayvazyan (photo), is listed as a 28% owner. 72% is owned by Caspian Bounty Steel Ltd., registered in the Virgin Islands.

The Hrazdan mine is currently not operating.

Russian Businessmen and the Dastakert Copper-Molybdenum Mine 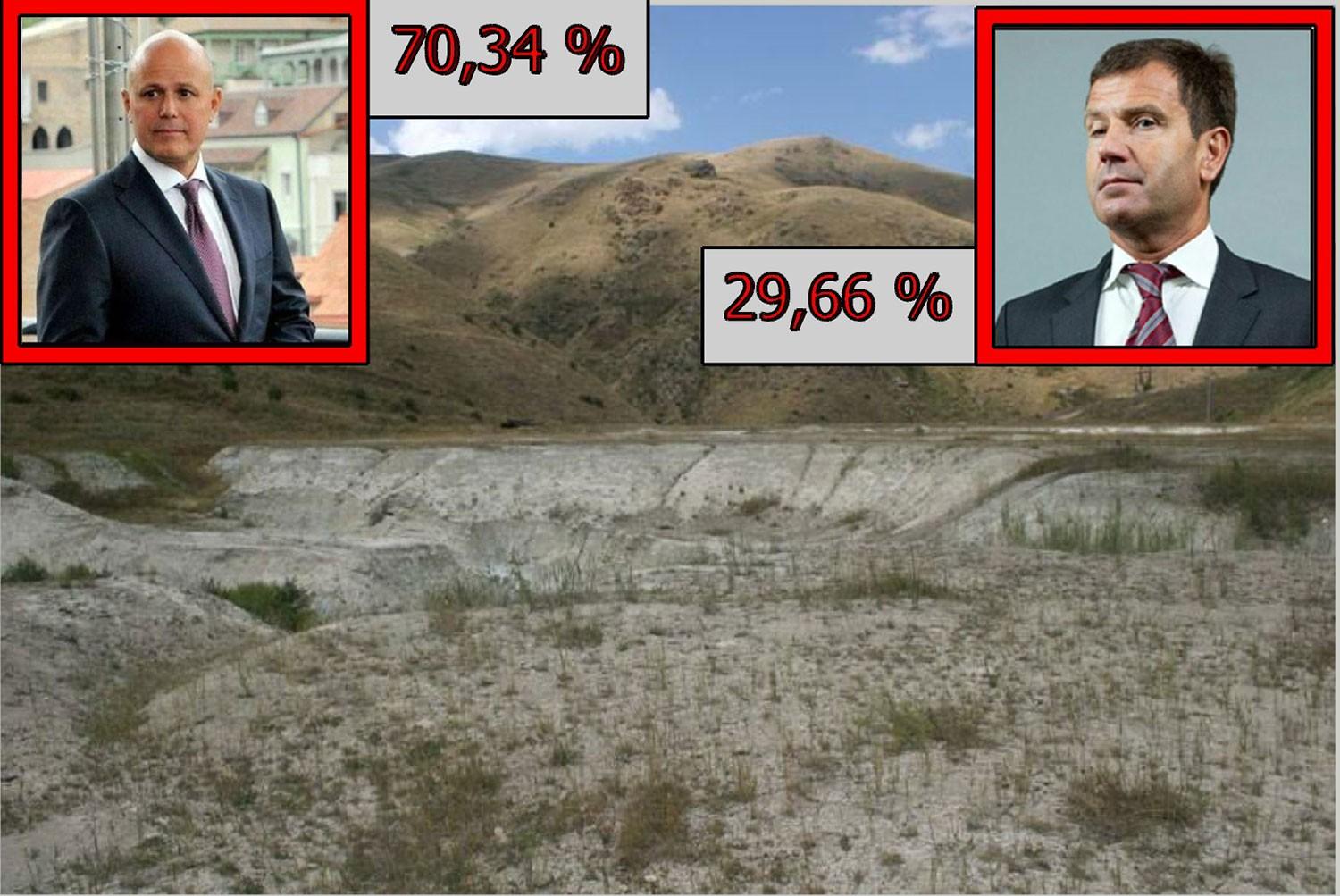 Molybdenum World LLC holds the permit to operate the Dastakert copper-molybdenum mine.

Russian businessmen Dmitry Troitsky and Dmitry Korzhin own 70.34% and 29.66% of the company, respectively. (The two also own shares in Sagamar CJSC that operates the Aramanis gold mine in Armenia.)

The mine is not currently operating and has submitted no reports to the Extractive Industries Transparency Initiative (EITI).

Video and photos by Saro Baghdasaryan