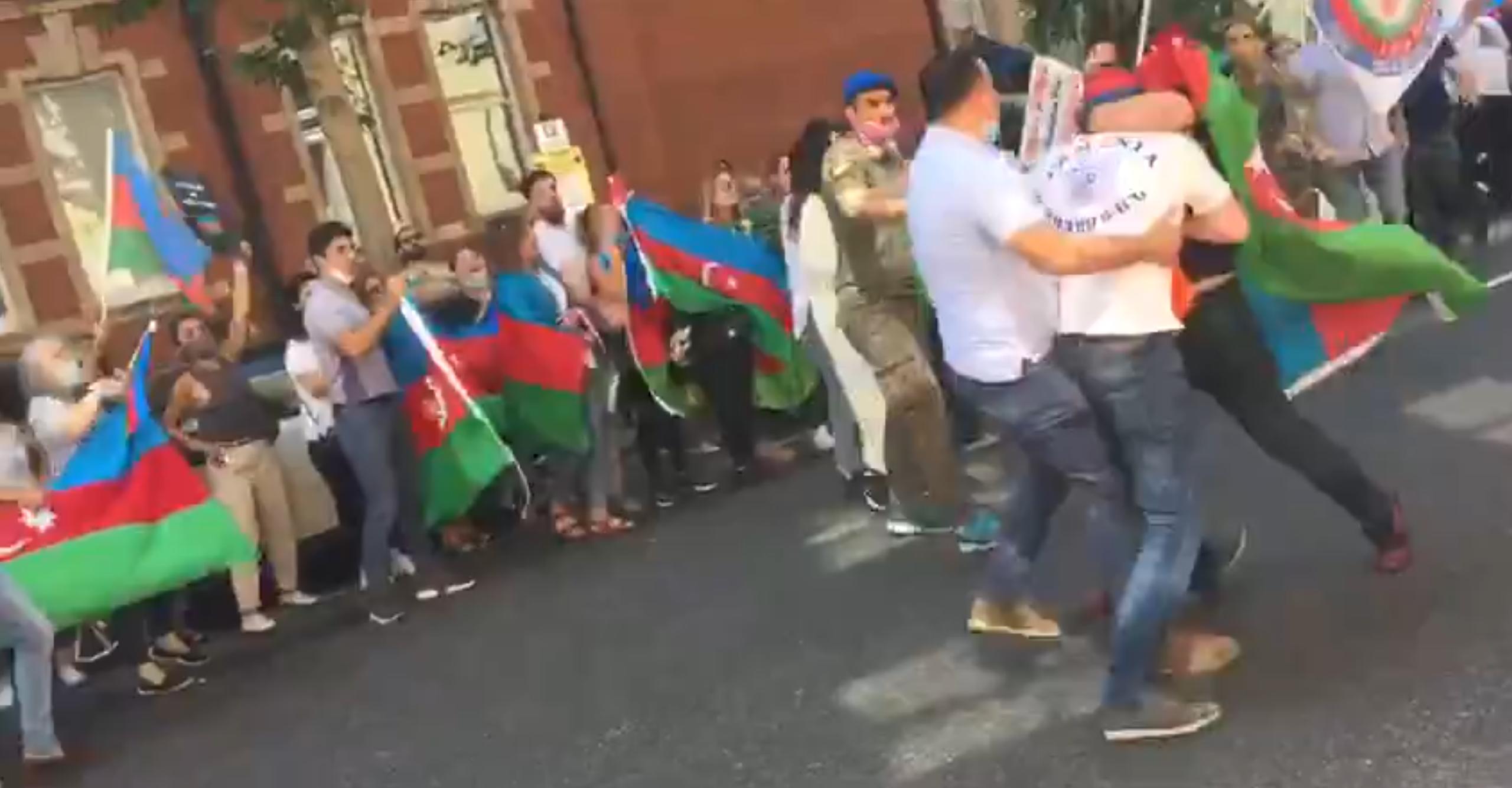 Members of the Azerbaijani community in London today, July 17, staged a “Stop Armenian Aggression” demonstration outside the Armenian Embassy.

The demo was organized by Azerbaijan Events UK Facebook page.

London area Armenians, hearing about the event, staged a counter demonstration, mostly composed of Armenian students. They were joined by embassy staffers and local Armenian clergymen.

Fisticuffs broke out as the below video shows.

THIS IS HOW VIOLENT AZERIS ARE !!!! THEY COULDNT EVEN PROTEST IN PEACE SO THEY STARTED ATTACKING ARMENIANS pic.twitter.com/mt6TvES7pE

Sipan Petrosyan, one of the Armenian demonstrators, reported to Hetq what he witnessed.

Sipan told Hetq that the first clash occurred when the Azerbaijani demonstrators, who outnumbered the Armenians, threw their placards towards the Armenians standing on the opposite sidewalk. That initial clash didn’t last long.

The second encounter occurred when an Azerbaijani woman ran towards the Armenians and grabbed a poster displaying the face of Azerbaijani President Aliyev from the hands of one of the Armenians. The Armenian demonstrator attempted to snatch the placard from her. This incited the Azerbaijanis to attack the Armenians, according to Sipan.

Police on the scene intervened, separating the opposing demonstrators.

“Throughout the demonstration, the Azerbaijanis were extremely aggressive. They cursed us in Armenian. We were chanting, we want peace. They responded by yelling, you want peace, we want revenge,” Sipan told Hetq by Zoom call.

Sipan said that there were no serious injuries. The police instructed the sides to disband and the demonstration ceased.

Preston Bagrationi 2020-07-18 19:07:45
Jafarzade. Time for You to overthrow Aliyev and his family, and return to the peace negotiations. There is no alternative for peace. Sneak blitzkrieg attacks will not make us run away. You attacked and lost. You attack again and you will lose again. Aliyev is delusional. A dictator can last only a few decades. Armenia has had four presidents since independence, whereas Azerbaijan had the aliyev family to deal with. You can buy 5000 tanks and 500 fighters but you still will lose. We will NOT allow another Genocide of our people. Out of the 167 of my Bagrationi family members, only 2 survived the Genocide. I invite you to force your government to come sit down for a Final resolution for our issues. War is Not the answer. You will Not win the war with us. One on one on the battlefield, we are FORCED to beat you, because the alternative will be yet another Genocide. Let us TALK and let PEACE prevail.
Agajabrail Jafarzade 2020-07-17 22:53:38
This news is fake. A friend of mine who was in the protest told me that the armenians were the ones who threw the placard. I do not believe that we were the aggressors in any way, shape or form!