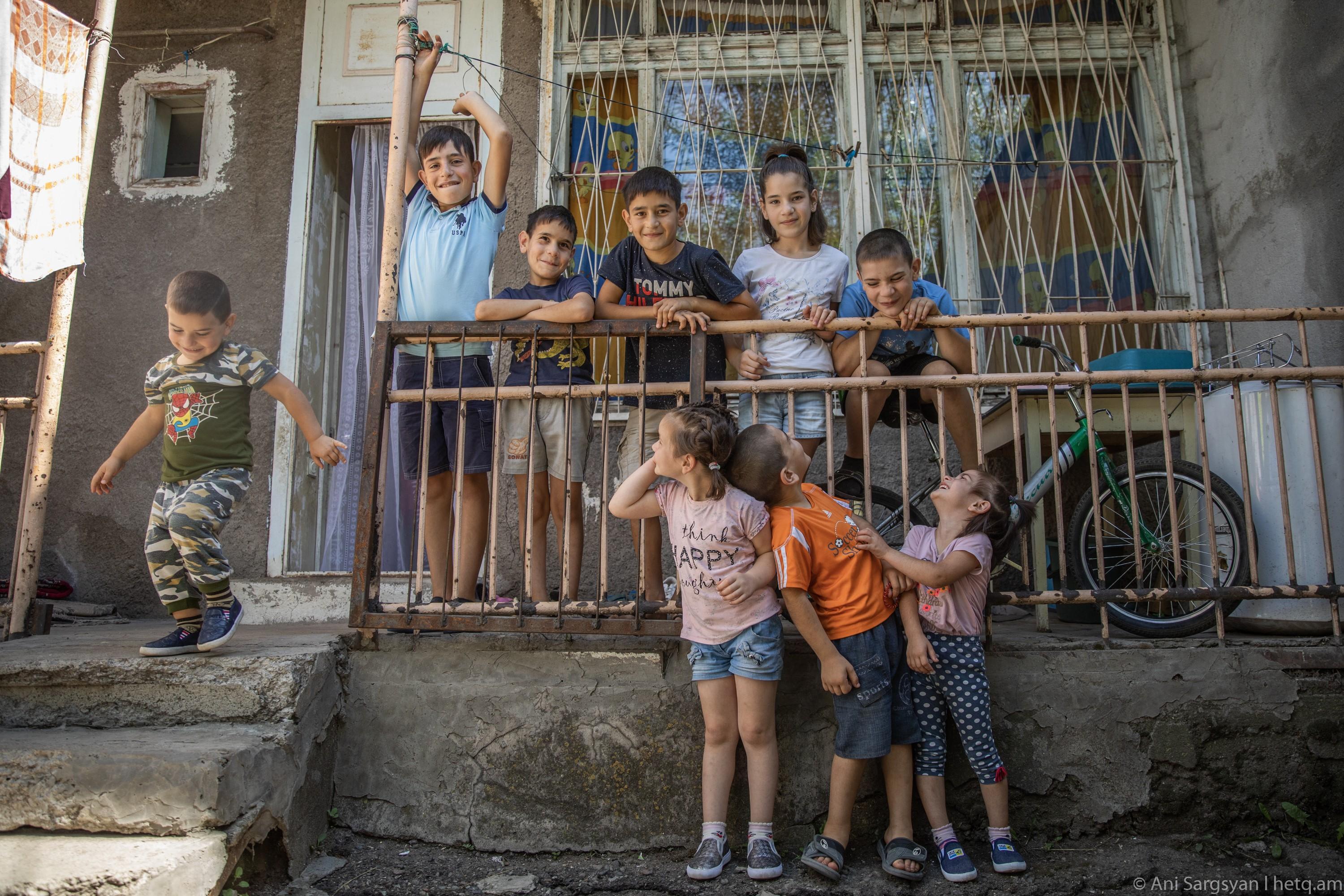 Looking Ahead: Gyumri Mother of Nine, a Survivor of Domestic Abuse, Wants Her Children to Excel

Hovo accompanies us to the main street. The road is sandy and poorly maintained.

We stand in the corner of the building for a few seconds, talking. The 12-year-old boy from Gyumri is the eldest of nine children in the family.

When he was a child, his father took him and his brother Gor to the mountains to tend livestock. The two brothers kept one hundred cattle in the village.

The sun's rays fall on Hovo's face, emphasizing the sadness hidden in his eyes. He looks away from me when he talks about life in the mountains. He says they missed many school classes. They had to work there because it was their father’s will. Their father often crashed on the bed drunk and the boys had to watch over the herd. Hovo says he and his brother wanted to go to school and envied those who could.

"You're going to school this September, aren't you?" I ask to dispel the gloom of the conversation.

"Yes, we are going to a new school with seven other children,” he says, a light smile appears on his face. 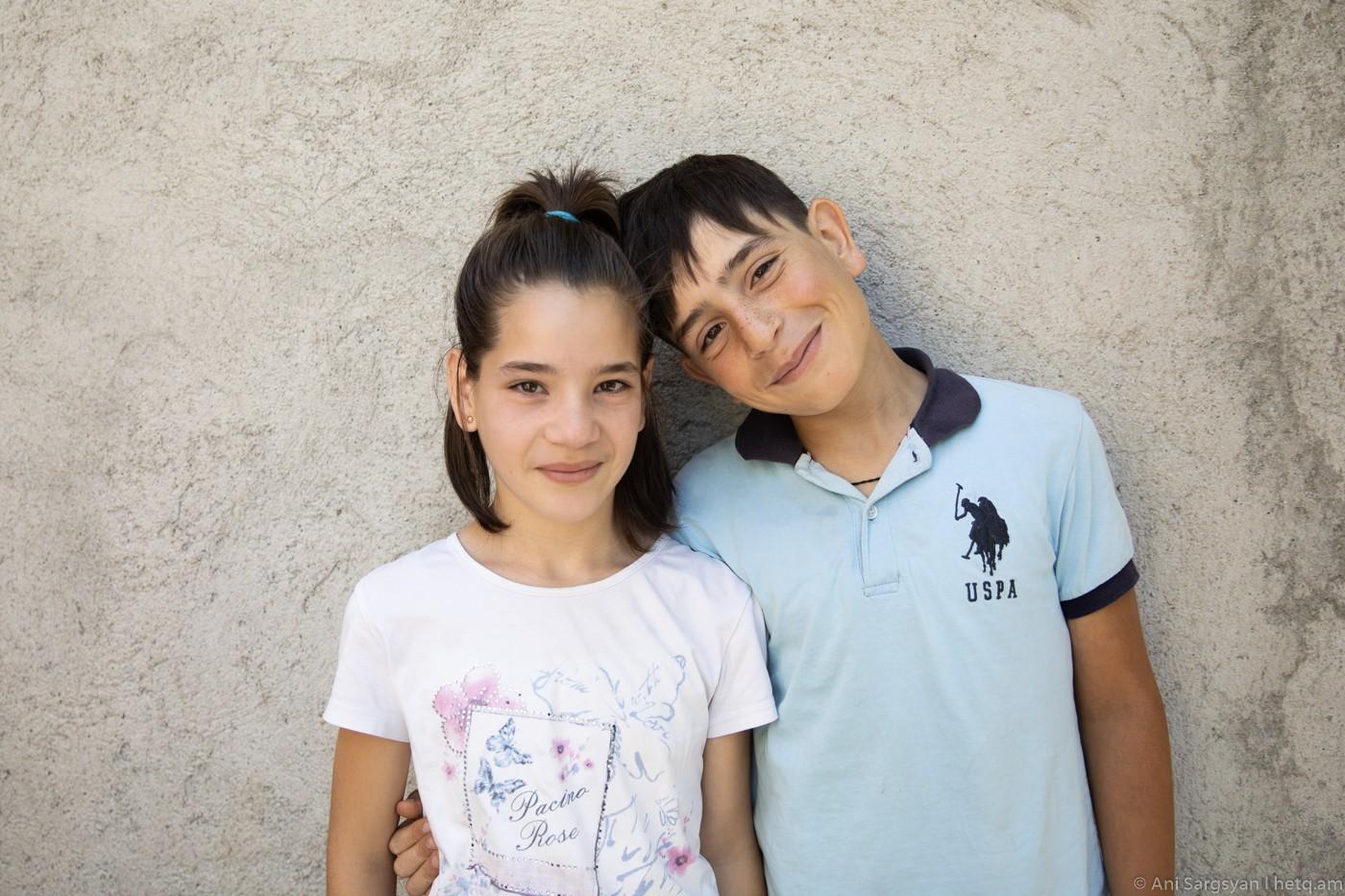 When Hovo (Hovhannes) finishes school, he wants to become a builder. He says he will build a two-floor house and provide a room for all his siblings and will dedicate the largest room to his parents. 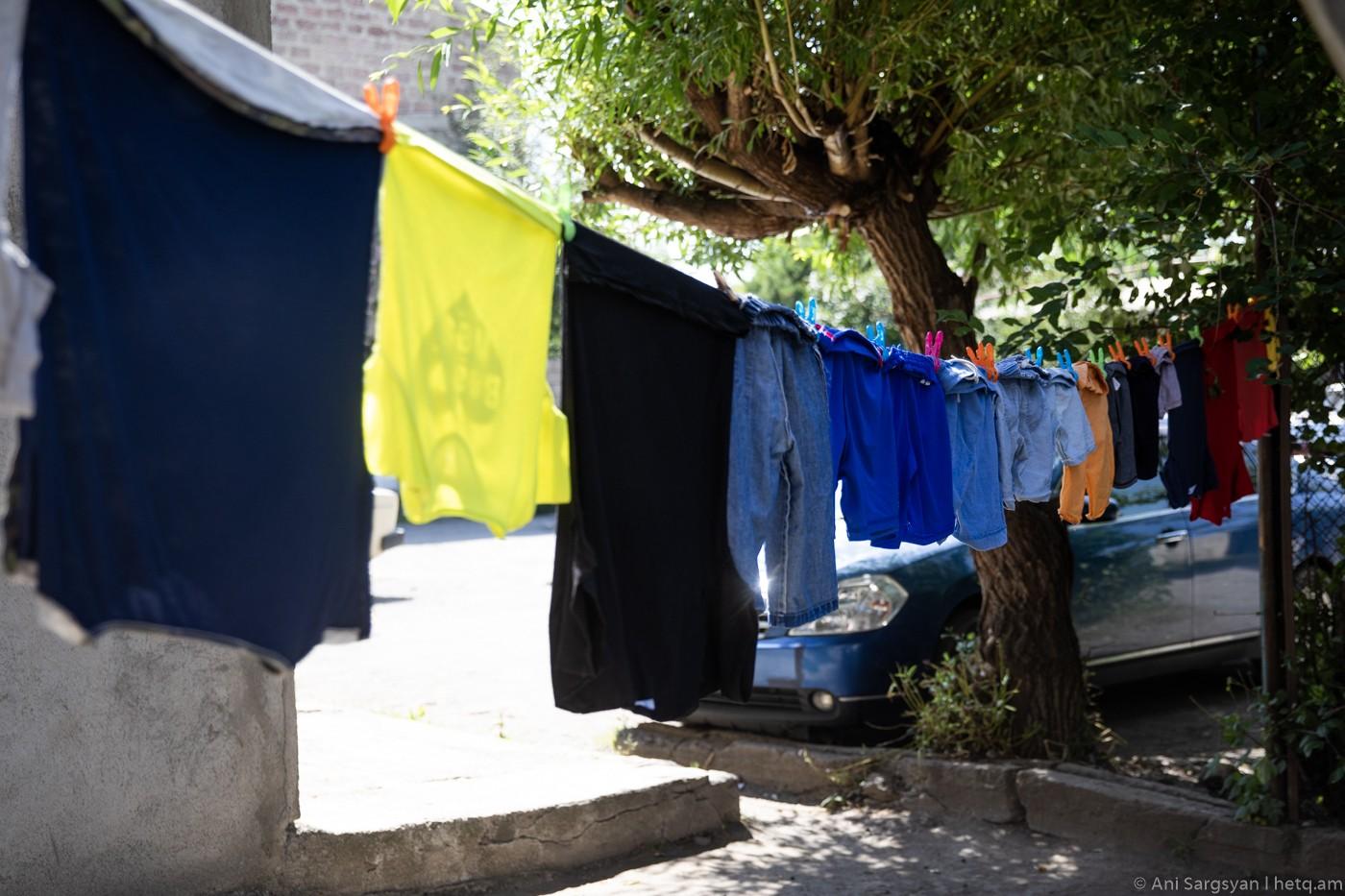 We reach the yard of a two-story building which, it can safely be said, is in bad shape. Clothes are on the line, drying according to color and size. Aida Gasparyan the mother of the nine kids, greets us at the entrance of the house. The children, scrubbed and cleanly attired, soon gather around us. Their inquisitive gazes are replaced by smiles. 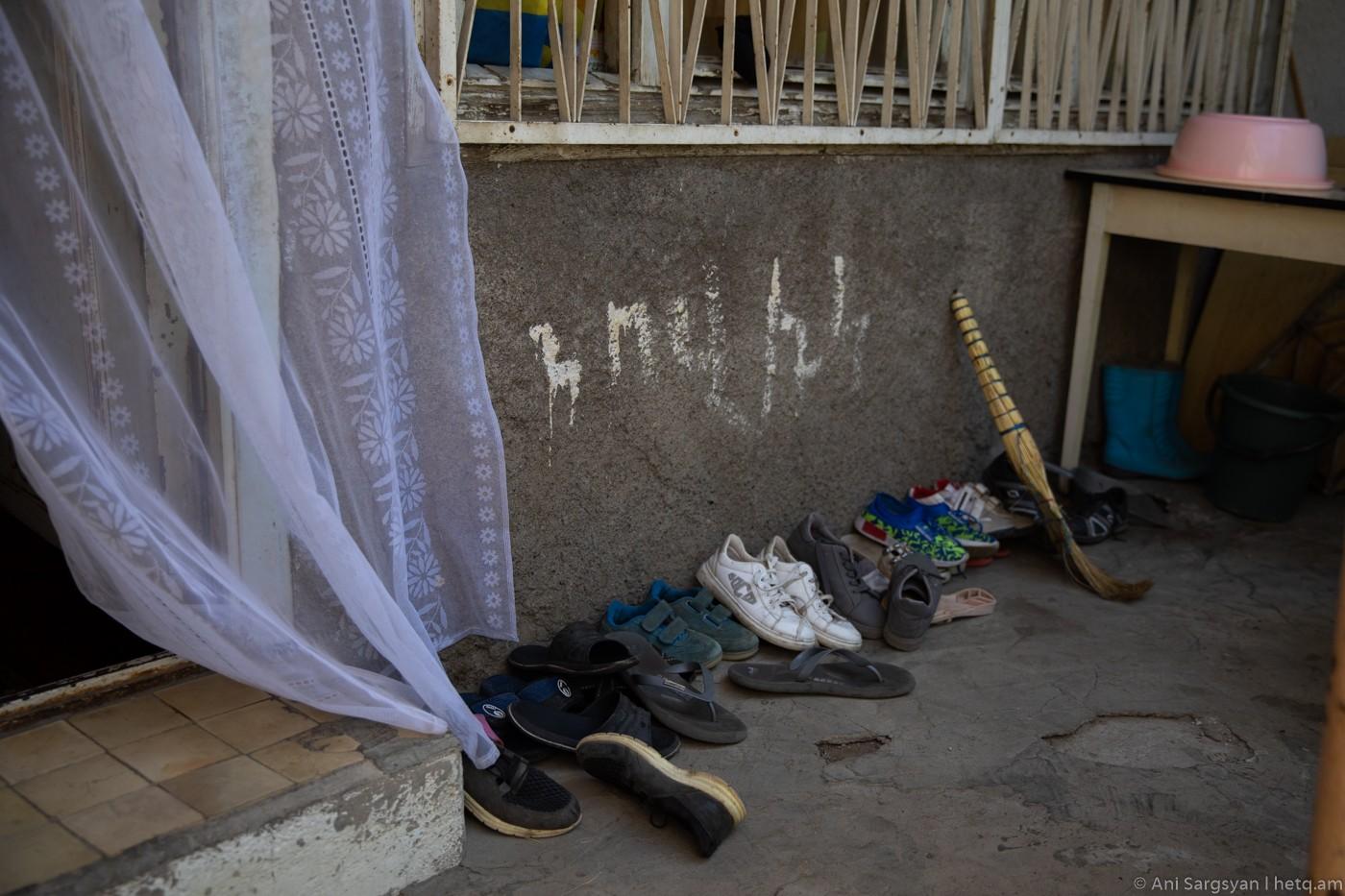 "Where are you from?" the neighbor interrupts our conversation. “They are very smart and educated children.”

The mother of nine invites us inside. The children quickly settle in the living room wherever they can. They are Hovhannes, Gor, Meri, Albert, Grigor, Samvel, Mariam, Angelina and Narek. The eldest is 12-year-old Hovhannes, the youngest, three-year-old Narek. 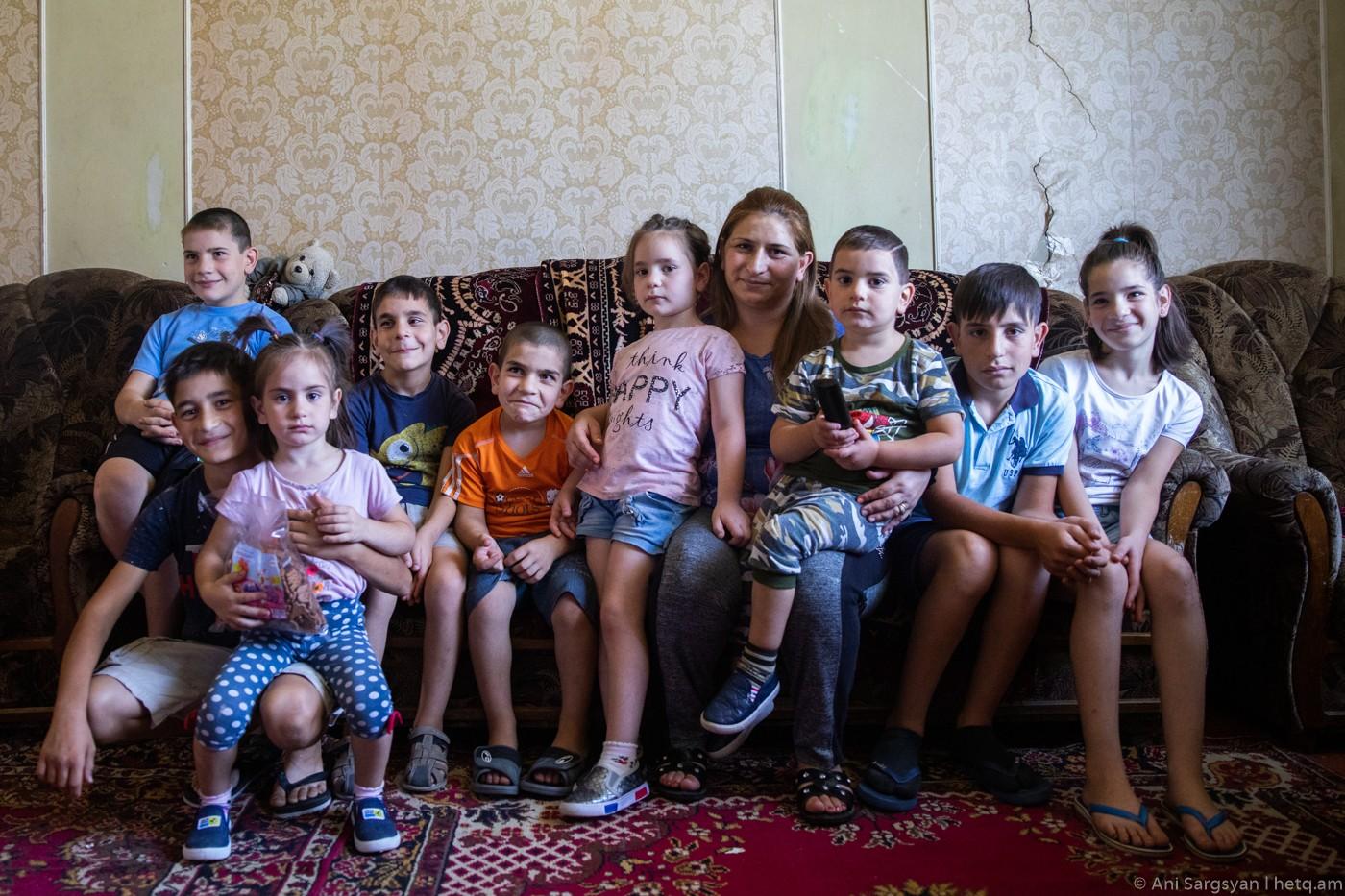 The house is so clean, you can’t spot a crumb on the floor. The toys are put away and the clothes are all hung in closets.

"How do you manage to keep the house so clean with nine children?" I ask Aida as we sit on the couch.

“Well, I try to get up early. Whether I like it or not, even in the middle of the night, I must clean. You know, not having anything is linked to cleanliness. There’s a type of person who says I have nothing, so my kids are dirty. When I receive my stipend, the money is first spent on hygiene items. My kids need them,” Aida says.

Aida Gasparyan is 32 years old. She married in 2007. The couple never dated. Her future husband was a friend of her sister's husband. He saw her and “snatched” her.

The first four years of marriage passed peacefully. The husband was caring, attentive, and then, Aida says, he started drinking.

“Hovik and Gorik were going to school. He would send them to bring him vodka while he was working in the field. The children had to take it to him in their school clothes. He’d beat them, and me, if they didn’t. I would take Hovik to school only occasionally.  The school principal would call me, asking why my kids weren’t attending classes," says Aida. 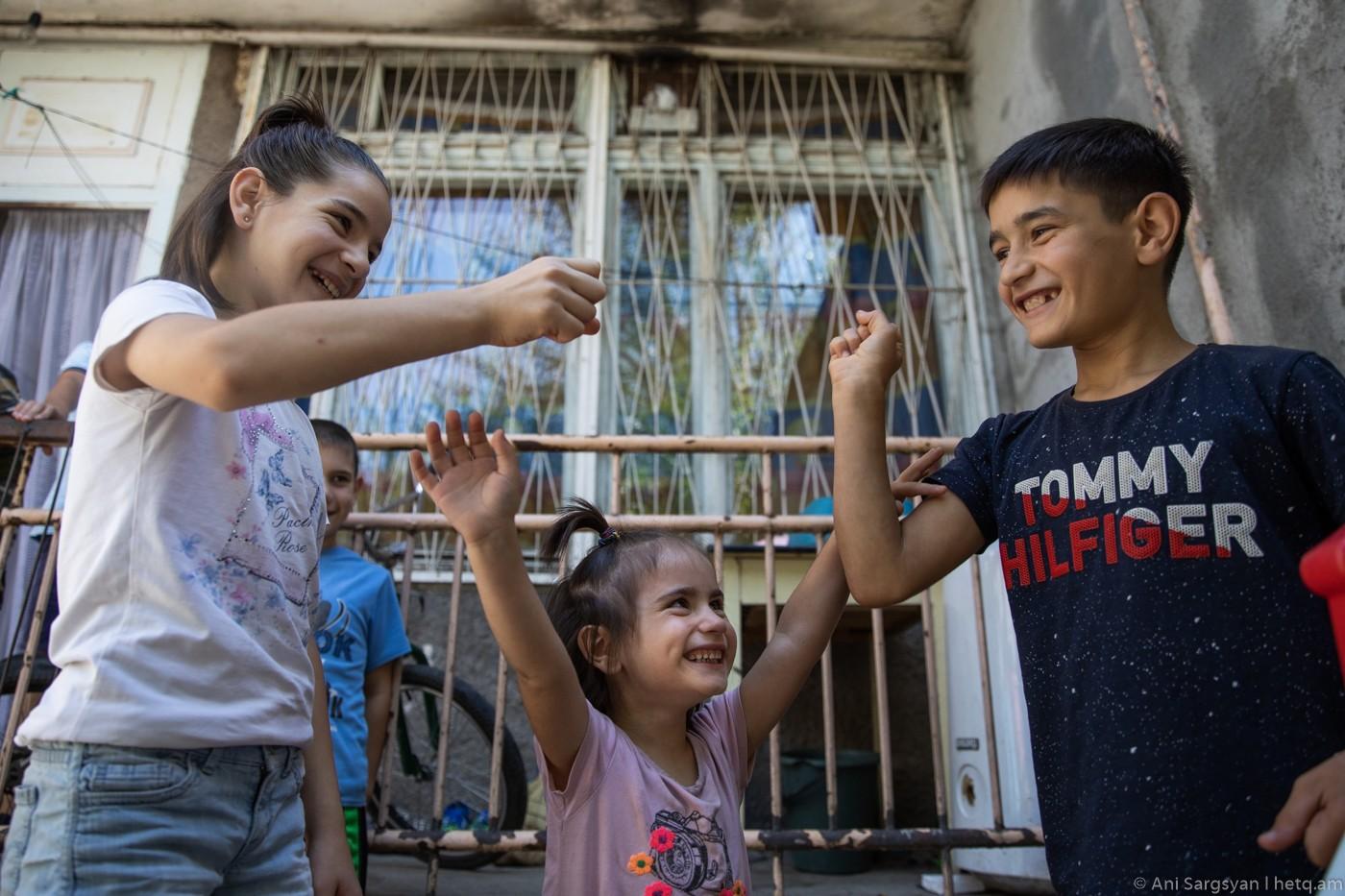 "What did you answer? Why didn't they go to school?" I ask her. The children were not present at our conversation. They were playing in the yard.

“He’d take the child with him to tend the animals. He’d drink his full and fall asleep. Someone had to watch the animals” Aida responds.

Aida says that if the neighbors didn’t visit the house now and then, her husband would have beaten her to death. They even called the police once.

She says that due to constant arguments and swearing, the neighbors complained and finally drove her husband out of the village. Aida still has good relations with those neighbors.

“Even when he slapped me, I’d forgive him. But he’d grab my hair in front of the children. He would curse me and kick me. My eyes were swollen.  I couldn’t go anywhere outside. His sister and mother also hit me. But I remained silent. I tolerated it. I am sorry that I tolerated so much and about the years that I have lost.  He was drunk, I had to meet his demands. I was pregnant with Angelina," says Aida. 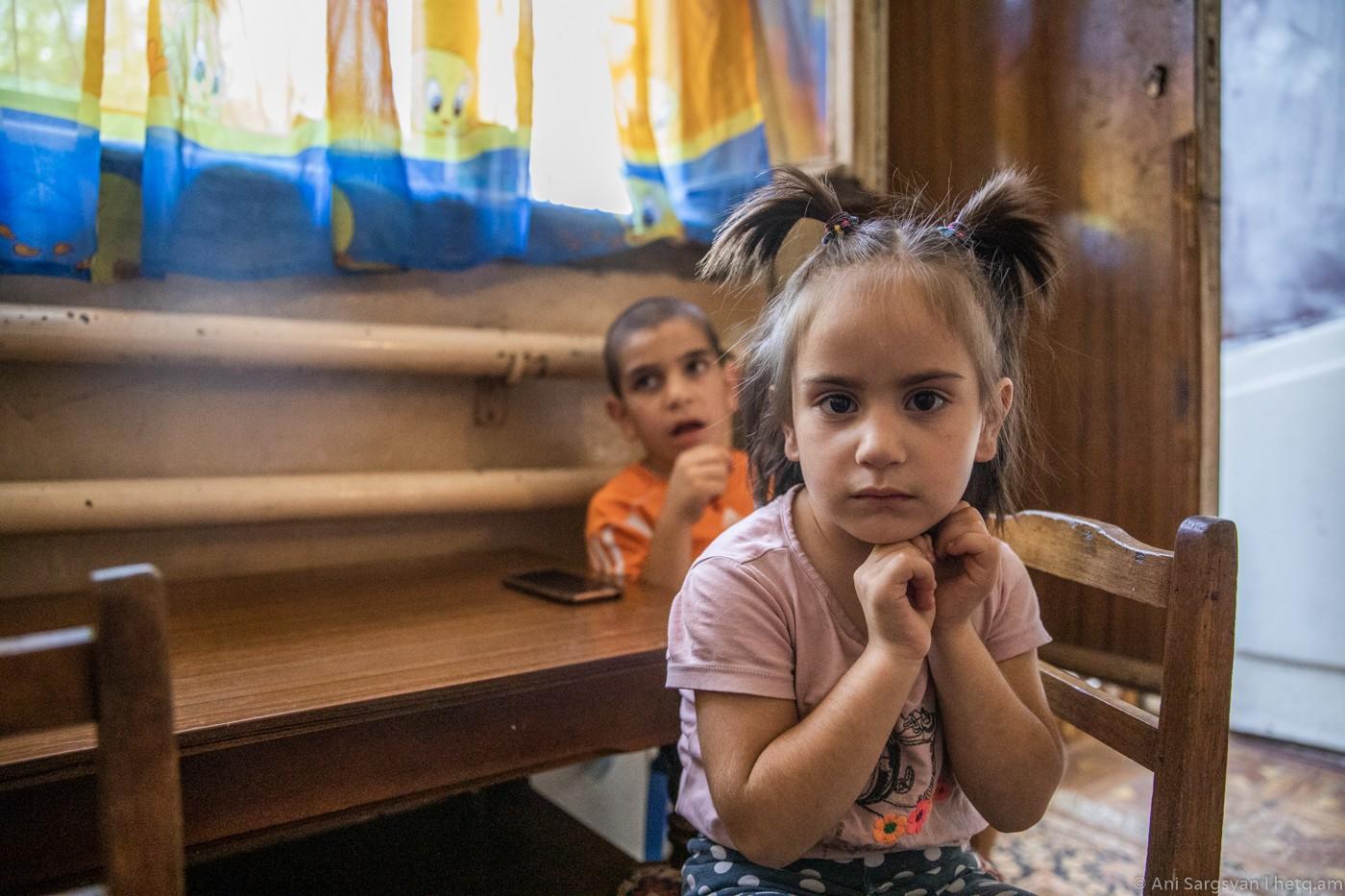 "Why were you silent for so many years? You had nine children and you were still tolerating those beatings," I ask her again.

“Who knows? I was always embarrassed. I didn’t want my parents to know what was happening. I would tell my brother, who would come to the house and berate my husband. But there was no way out.  After Narek was born, he became terrible, terrible ․․․ He didn’t take me to the hospital. My neighbors took me to the hospital. They prepared my children's meals and watched them after I came home from the hospital," the 32-year-old woman recalls. 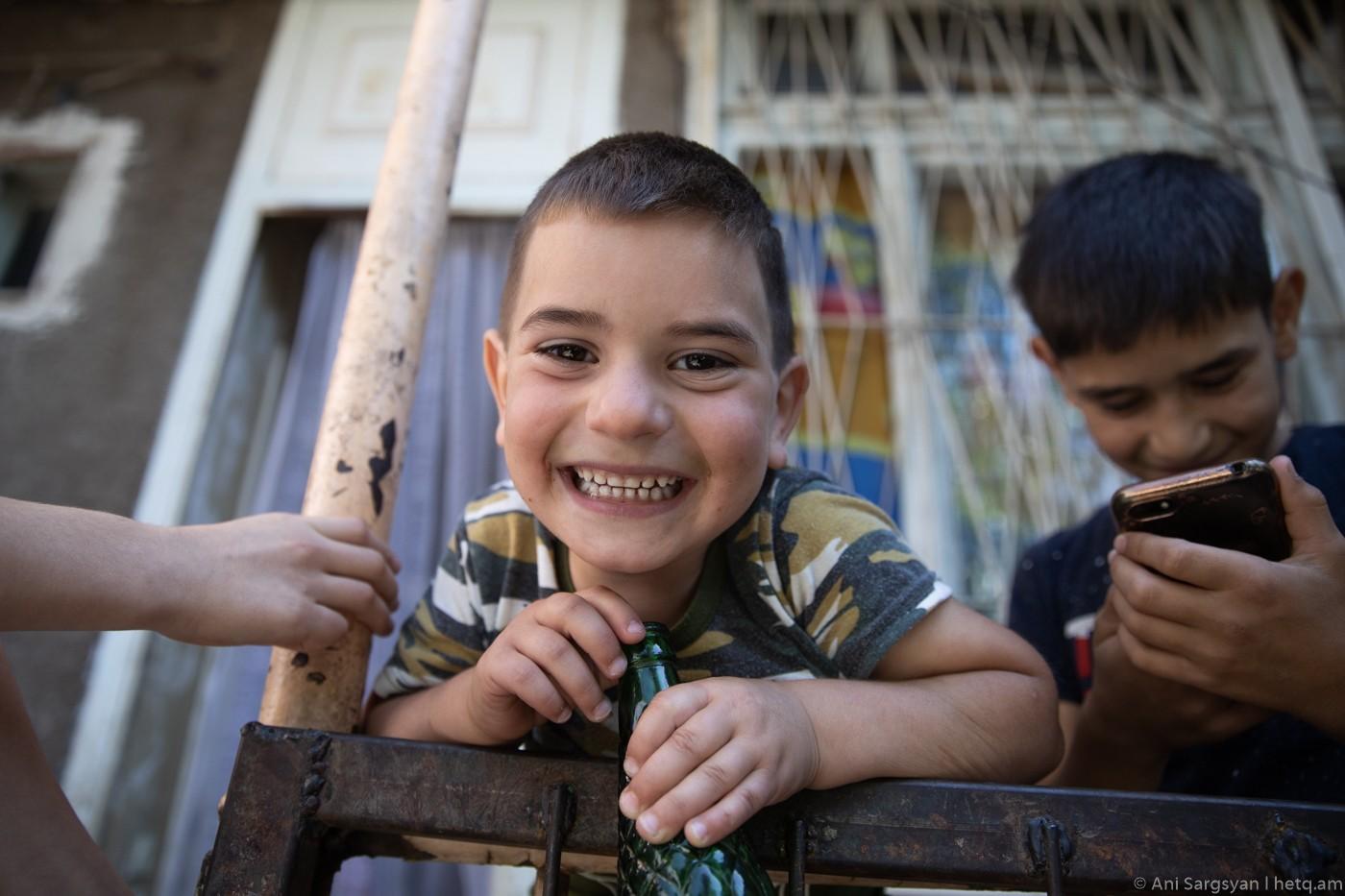 After the birth of Narek, her youngest son, Aida divorced her husband. She now lives with a man named Sevak. Aida says she is happy now and has put those difficult days behind her.

At first Sevak's parents were against their marriage. Aida says not many men would agree to such a marriage where so many kids are involved. She says that Sevak cares for them as if they are his own.  "My children call Sevak Papa," Aida says.

Now Sevak's parents not only accept the marriage, but also treat Aida like a relative. They live in Russia and sometimes send money and clothes for the children.

Sevak was not at home on the day of our visit. He was harvesting potatoes in the fields at 3,000 drams a day. The main stable income of the family is the monthly 85,000-dram ($174) state stipend.

Aida's 11-member family now lives on the first floor of a run-down building on Ghandilyan Street in Gyumri, Armenia’s second largest city. The monthly rent is 30,000 drams. They move from house to house waiting for their own place. Aida says it’s near impossible to find a place with nine kids.

The family had been turned out on the street before renting the Ghandilyan apartment. The landlord had sold the house and they couldn’t find a new domicile in time.

They moved to Ghandilyan house two months ago. Most of the property belongs to the landlord, including the TV, which he will soon take. The children will be left without a TV.

The smell of dolma on the stove spreads throughout the house. During our conversation, Aida checks whether it’s ready. She says the children wanted dolma, and she bought meat with the money her husband earned yesterday. The children, however, have learnt to get by on much less. "I’ll sit with them, read them a book of fairytales, play games or watch TV. If I finish the chores early enough, I’ll take them to the park. I don’t let them hang their heads or fall behind others," says Aida.

Seven of the children will start school on September 15. They still don’t have proper school clothes, shoes or supplies.

The children come in from the yard and settle in.

Each has their own dream for the future. Gor says that in a few days he will take part in a fencing competition. Meri listens silently, then says that she will become a hairdresser. She combs her younger sisters' hair and helps her mother with household chores.

Aida dreams of having her own place, even out in a village somewhere. She says they’ll start a small business and live better than in the city.

“I know how to milk the cows. I did it when I was pregnant, just to earn some money to buy schoolbooks for the children. I used to make 60,000 drams monthly milking eleven cows,” says Aida. 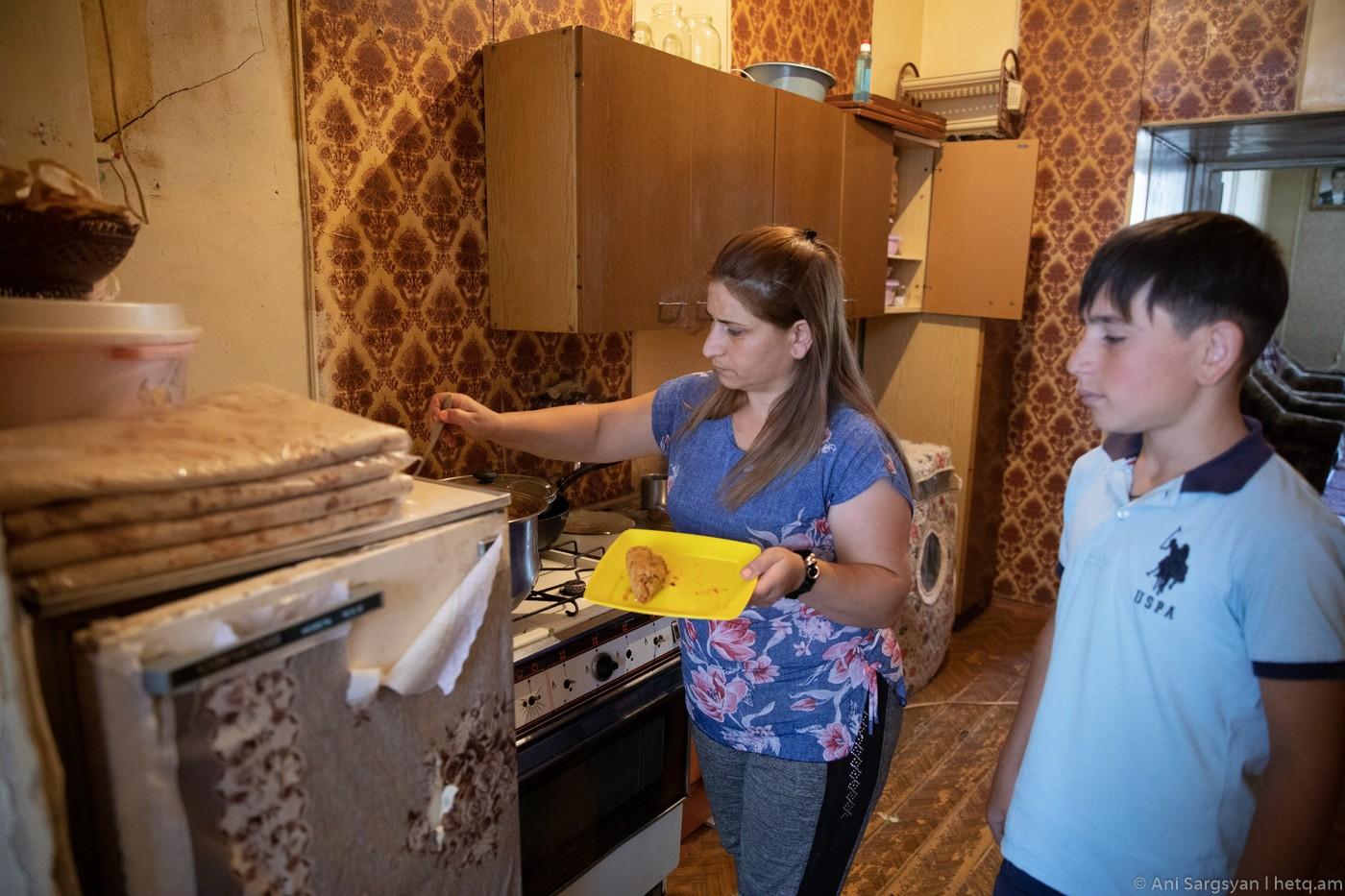 Aida believes the worst is behind her, that she has overcome the challenges along the way, and thanks God that her children are healthy.

"I feel so happy knowing that my children are sleeping peacefully, that there is no one cursing or beating them.  one cursing near them, no one is beating them. As I sit on the couch, I start to think. I think about my children, about the house. My second husband keeps asking, ‘What are you thinking about?’ He never lets me mull over the bad times,” says Aida.