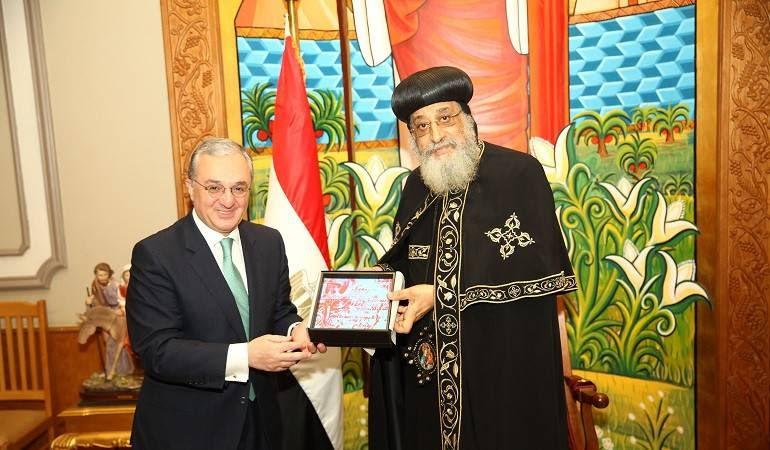 Armenian Foreign Minister Zohrab Mnatsaknayan, who is on an official visit to Egypt, today met with the Pope of the Coptic Orthodox Church of Alexandria and Patriarch of the See of Saint Mark Pope Tawadros II.

The foreign ministry issued the following statement on the meeting.

The Foreign Minister and the Pope of the Coptic Orthodox Church discussed a number of issues concerning religious minorities, particularly highlighting the importance of religious tolerance and peaceful co-existence.

In this regard, the interlocutors deplored the targeting of religious groups by terrorist and extremist groups, emphasizing the need to protect religious groups, including through guaranteeing their rights, and preserving the religious and historical heritage. In this context, the Minister noted. "Armenia works through various international formats and platforms towards the protection of the rights of vulnerable national and religious minorities, ensuring the diversity of religions, in order to consolidate and strengthen their potential."

The Minister commended the hospitable attitude of the authorities of Egypt towards the Armenian community, which had an exclusive contribution to the establishment and development of the Egyptian state.

Tawadros II highlighted the sustainable collaboration of the two sister churches - the Coptic Orthodox and the Armenian Apostolic.