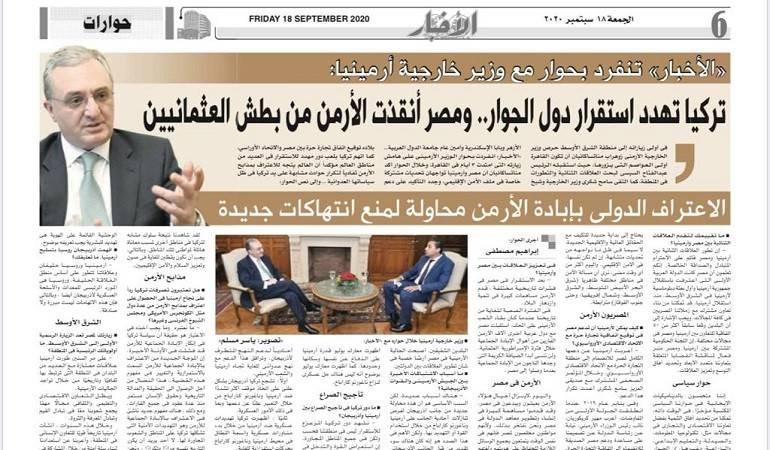 Armenian Foreign Minister Zohrab Mnatsakanyan is now in Egypt on an offical visit.

The following was released by the Armenian Foreign Ministry.

What is your evaluation of the progress of bilateral relations between Egypt and Armenia?

Armenian-Egyptian evolving bilateral relations have always been based on mutual respect and sincere friendship. You know Egypt was the first Arabic country to recognize the independence of Armenia and the first Arabic state to host the Armenian Embassy. Since the independence of Armenia, we have managed to achieve a broad range of relations with our Egyptian colleagues. The mere mention of the fact that Armenia and Egypt signed more than 50 agreements in different fields of cooperation. Joint Armenian-Egyptian intergovernmental commission is an effective platform to discuss issues related to our multidimensional cooperation and outline the perspectives of its further expansion and enhancement.

We are encouraged by the recently gained positive dynamics of our political dialogue. Meantime we have been able to outline perspectives of development for our economic and trade affairs: IT, pharmaceutics, creative education, agriculture, etc. The discussion and combining of the positions on regional processes and challenges hold a special place on our agenda.

Our interstate cooperation has been successful and together we achieved important results. However, we feel that our cooperation needs a fresh start to adjust to new global and regional realities, particularly in the situation when we are facing similar if not same challenges in regional security. Today as never before we see that the security between seemingly different regions of Eastern Mediterranean, Middle East, North Africa and even South Caucasus are interrelated.

How can Armenia support Egypt in signing a free trade agreement with the Eurasian Union?

Armenia expressed its full support to the intention of Egypt to join the free trade zone with the Eurasian Union. And yesterday during the joint press conference with my good friend, Foreign Minister of Egypt Sameh Shoukry I reiterated that support.

In January 2019, when the first round of negotiations kicked off, Mr. Mher Grigoryan, Deputy Prime-Minister of Armenia, expressed our determination to assist and support friendly Egypt to join free trade agreement. We believe that all sides will benefit from deeper partnership within the framework of the above-mentioned agreement. That's why we strive for the soonest conclusion of all the procedures for signing the agreement.

What role do Armenian Egyptians play in promoting relations between Egypt and Armenia?

Settling in Egypt in different historical periods, Armenians have made their significant contribution to the development and prosperity of the country.

In the very difficult part of our history when the survival of the Armenian people was at stake, Egypt along with other Arab countries received thousands of Armenians fleeing from the horrors of the Genocide in the Ottoman Empire. We will never forget the hospitality that the survivors of Genocide found in Egypt.

Today, the generations of those Armenians continue to live and create in Egypt, they made a significant contribution to the establishment and development of the state institutions of Egypt and we take great pride in that. Being devoted citizens of Egypt, they are at the same time endowed with all the necessary means to preserve their identity, language and traditions. Of course, we are deeply grateful to the Government and the people of Egypt for these efforts and the protection of our people.

What are the reasons for the recent clashes between Armenia and Azerbaijan?

There are many reasons, but the underlying reason is that this is a renewed attempt by Azerbaijan to impose unilateral concessions on Armenia and Nagorno-Karabakh through use of force and threat of force. But what is more important in this regard, is that it was a miscalculation by Azerbaijani side which showed that their current capacities do not match with their well-known intentions.

What is the Turkish role in fueling the conflict between Armenia and Azerbaijan?

We have been witnessing Turkey’s destabilizing role not only in our region but in all other neighboring regions. The projection of power, intrusion and interference in the South Caucasian region do not contribute in any way to the peaceful resolution of the conflict and to regional peace, security and stability.

During the battles in July, Turkey has been the only country that was taking a one-sided supporting and fueling the maximalist approaches of Azerbaijan. That support was accompanied by a very aggressive approach toward Armenia and the Armenian people:

First, Turkey publicly encourages Azerbaijan to take a harder stance against Armenia and Nagorno-Karabakh by openly communicating its support, including in military matters.

Second, Turkey came up with military posturing against Armenia by initiating large scale military exercises in the vicinity of Armenia and Nagorno-Karabakh with very provocative moves.

Third, there is ongoing Turkish military build-up in Azerbaijan, which is strengthening and expanding their presence thereon.

Fourth, there are reports of recruitment of foreign terrorist fighters in Syria with aim to be transferred to Azerbaijan.

We saw the outcome of similar behavior of Turkey in other regions which inflicted immense suffering on the people living in those regions. Thus, we have to be very vigilant in maintaining and strengthening regional peace and security.

Do you consider Turkey's statements in response to recognition of the Armenian Genocide from several countries, including the US Congress, the French Senate and others?

This struggle for truth, historic justice and human rights has been ongoing for several decades in all continents. However, there is new emerging important dimension in recognition of the Armenian Genocide and that is the security threats posed by Turkey to its neighboring regions and peoples. Nobody wants history to repeat itself again and again and we need to acknowledge not merely the past but to prevent recurrences of new atrocities today and in future. A state and its leadership who justifies Genocide and supports terrorist groups engaged in identity-based atrocities is threat which needs to be clearly defined as such.

Azerbaijan accused Russia of arming Armenia. What is your comment?

Armenia and Russia are allies and our relations are developing based on the logic of allied relationship. Russia is a main supplier of military equipment and armaments to Azerbaijan as well and thus these accusations neither justified nor sincere.

This is your first official visit to the Middle East. What are your main priorities in the region?

Throughout the years Armenia has developed excellent relations with many countries in the region to which it is connected culturally and historically including via presence of the Armenian communities.

Economic, educational and cultural cooperation remain an important area which brings our people together in sharing values, generating knowledge and wealth.

Throughout these years, Armenia has established a strong tradition of humanitarian cooperation in the region. We expressed our readiness to build a secure environment by carrying out peacekeeping and humanitarian missions in the region.

Finally, security between the Middle East and the South Caucasus is interrelated. Therefore, we need stronger cooperation in this field including in countering transnational threats.