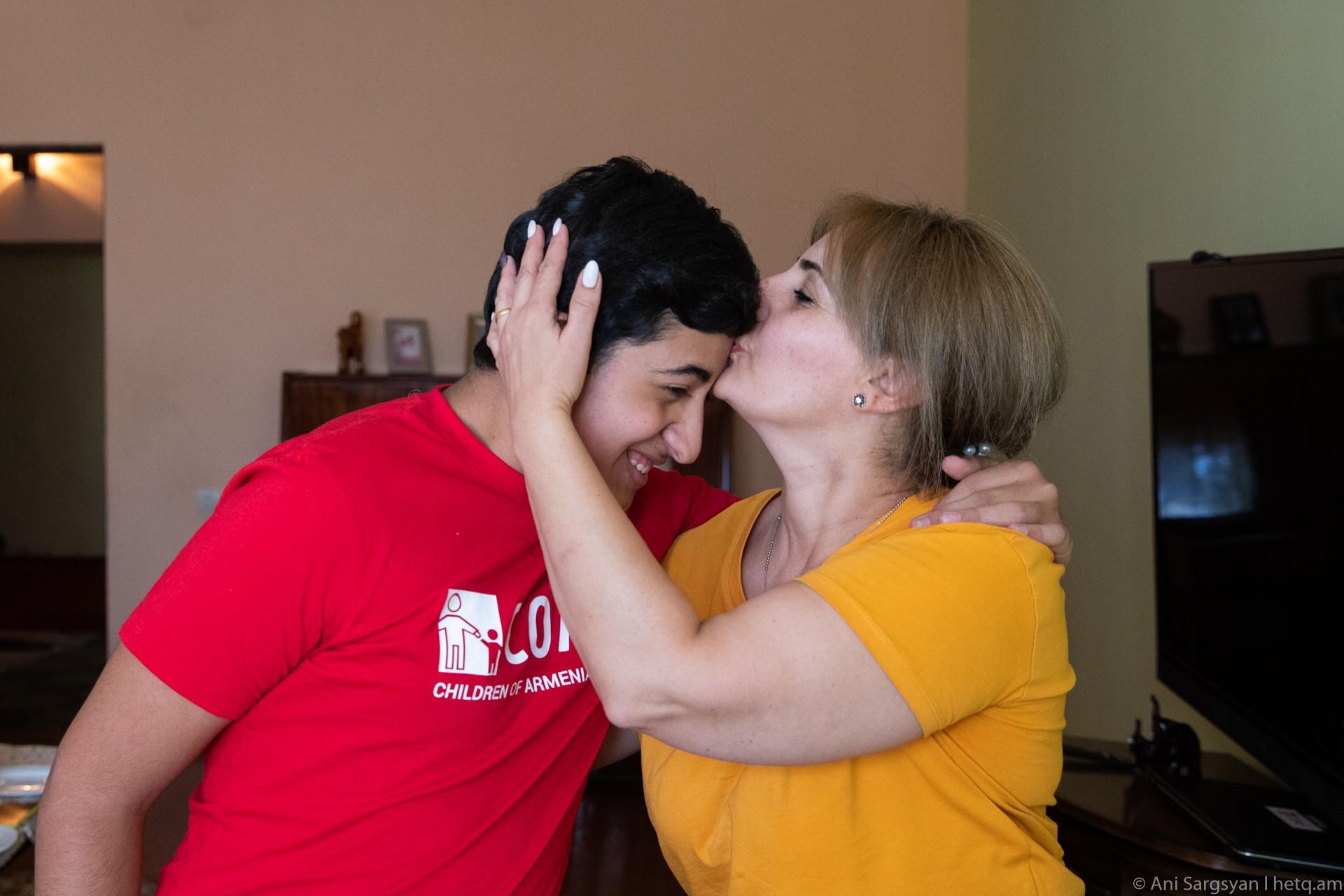 Emin Perseveres Despite the Pain: Overcoming Physical Challenges and the Loss of his Brother in the Artsakh War

The ongoing war in Artsakh has changed the lives of many. This is the story of 17-year-old Emin Mkrtchyan.

Emin lost his only brother, 19-year-old Vahe on September 30. Vahe had dropped out of university and enlisted in the Armenian Army.

Vahe was his pillar of strength. Emin has faced a host of challenges in his life before the war took his brother.

Emin was a premature baby, weighing a mere 1.5 kilograms. His twin brother died during the delivery. Everything seemed fine at first, but when Emin was nine months-old his parents noticed that the baby could not sit or roll. He was diagnosed with cerebral palsy and prescribed a course of physiotherapy. 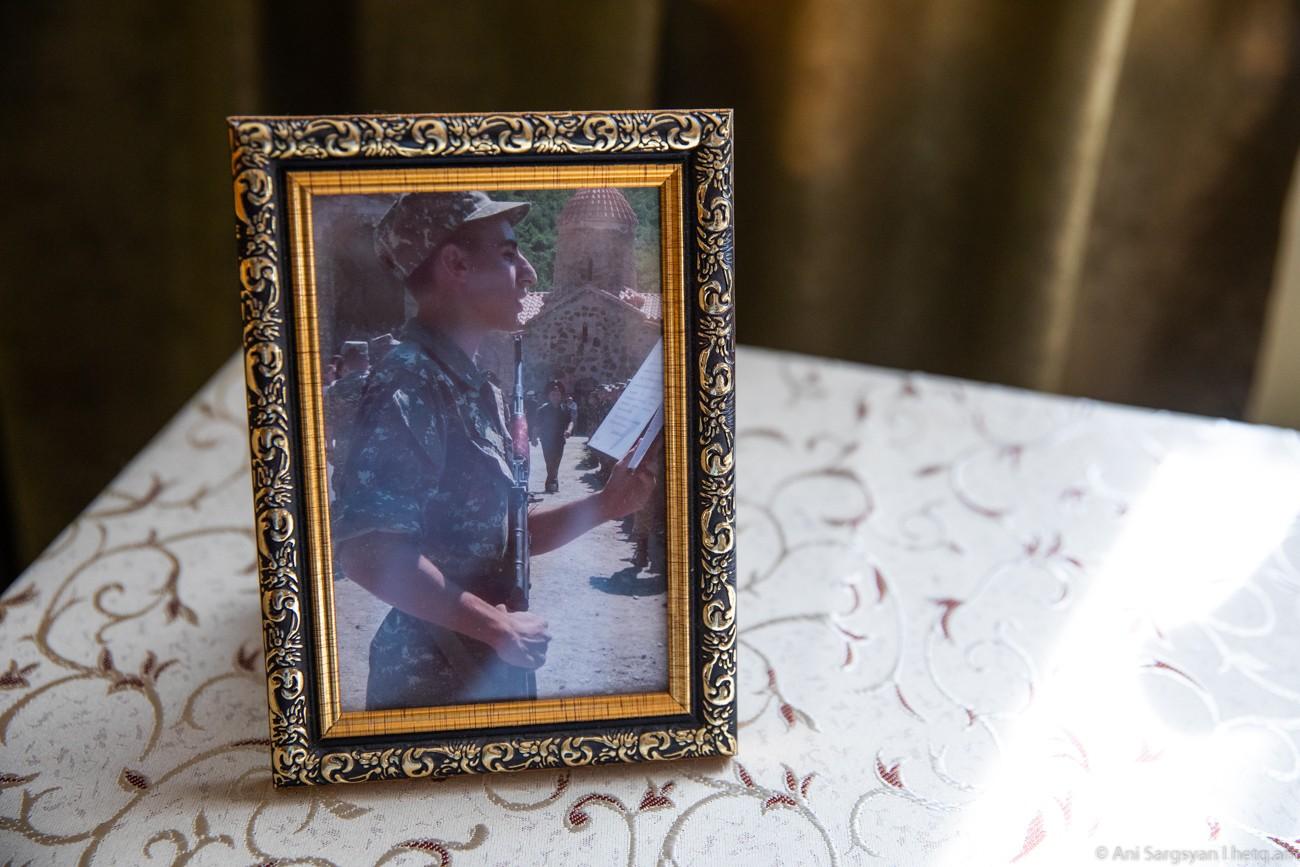 The results were not encouraging. The boy’s muscles were abnormally short, causing him to walk on his tiptoes. He couldn’t bend his knees. During physiotherapy, the foot was stretched so much that the child screamed in pain.

The Mkrtchyans live in Lernagog, a village in Armenia’s Armavir Province.

We reach the blue gate on the outskirts of the village. The gate is open. We enter. Emin's father is in the yard, he invites us home. The smell of freshly baked gata permeates the house. Emin's mother, Hasmik Muradyan, invites us to the living room. You can feel Vahe's presence everywhere here. His photos are placed on the piano and on the big table. Vahe played the piano at home. Emin joins us and settles in an armchair.

Mrs. Muradyan tells us that Emin has undergone numerous rehabilitation sessions over the years. Treatment at the Noragyugh Rehab Center proved effective to a degree, allowing Emin to take small but noticeable steps. The family also took the boy to the famous Jermuk sanitorium every year despite the difficulty in getting medical prescriptions to do so.

“Emin made me strong and stubborn,” says Mrs. Muradyan.

The boy on a bike

The boy refused to use a wheelchair from the get-go. Everyone knew him as the boy with the bicycle. Emin even rode a bicycle from class to class at school.

"It's interesting, isn't it, that a non-walking child can ride a bicycle," says Mrs. Muradyan. Emin smiles and says that as he grew up, his bicycles also changed. In addition to bicycles, he also used a walker. 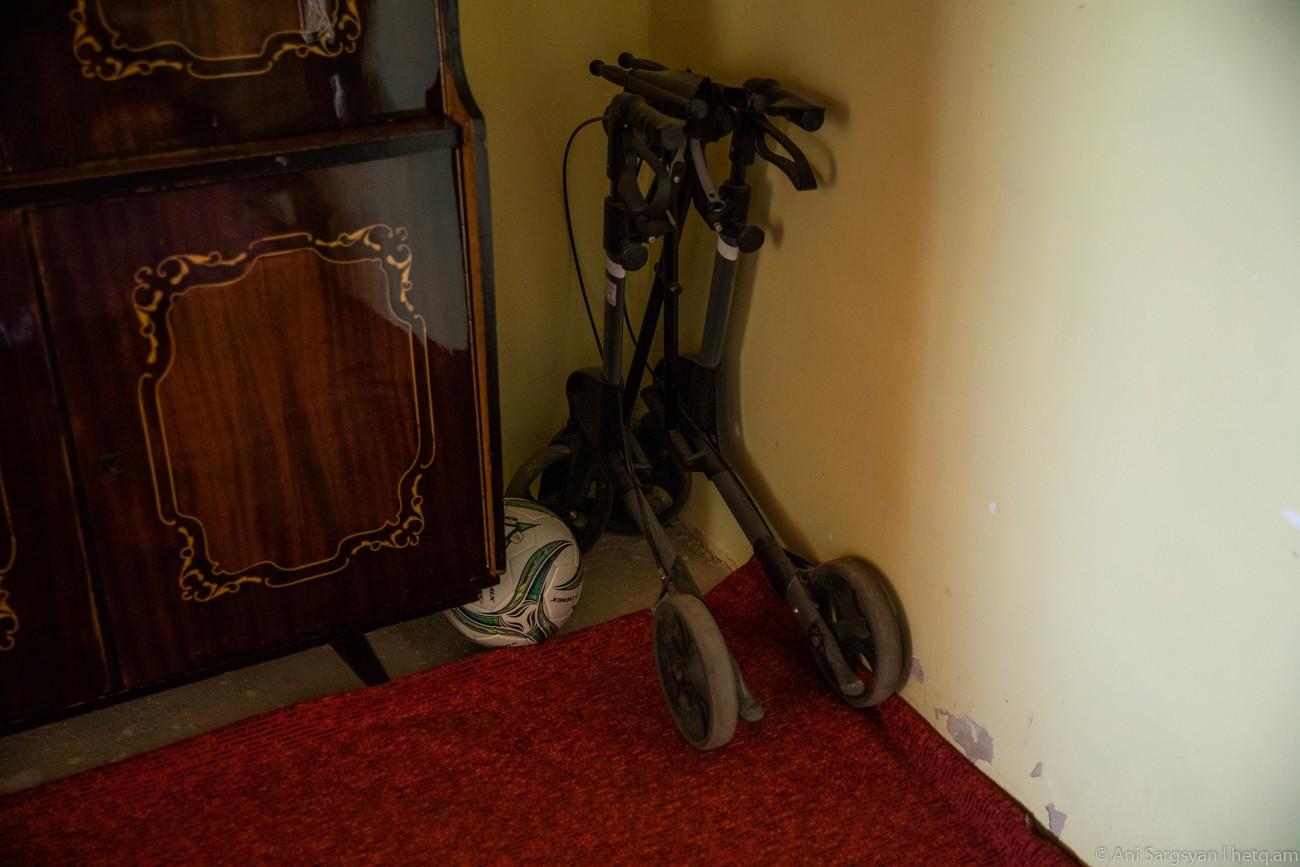 Before Emin started school, Mrs. Muradyan worked with preschoolers on a volunteer basis. There was no kindergarten in the village.

"Emin was in that group with his classmates. He wore knee-length orthopedic braces in his shoes, which caught the attention of the other kids. I told them they were Emin's new shoes. They treated Emin the way he was," says Mrs. Muradyan.

Emin tells us that nothing has prevented him from fully participating in life outside the house. Of course, he was in a lot of pain, and the rehabilitation courses were painful, but they became tolerable when he thought about walking. In addition, his older brother, Vahe, supported him in all things, defending him if someone dared utter some unpleasantries about Emin’s disability. 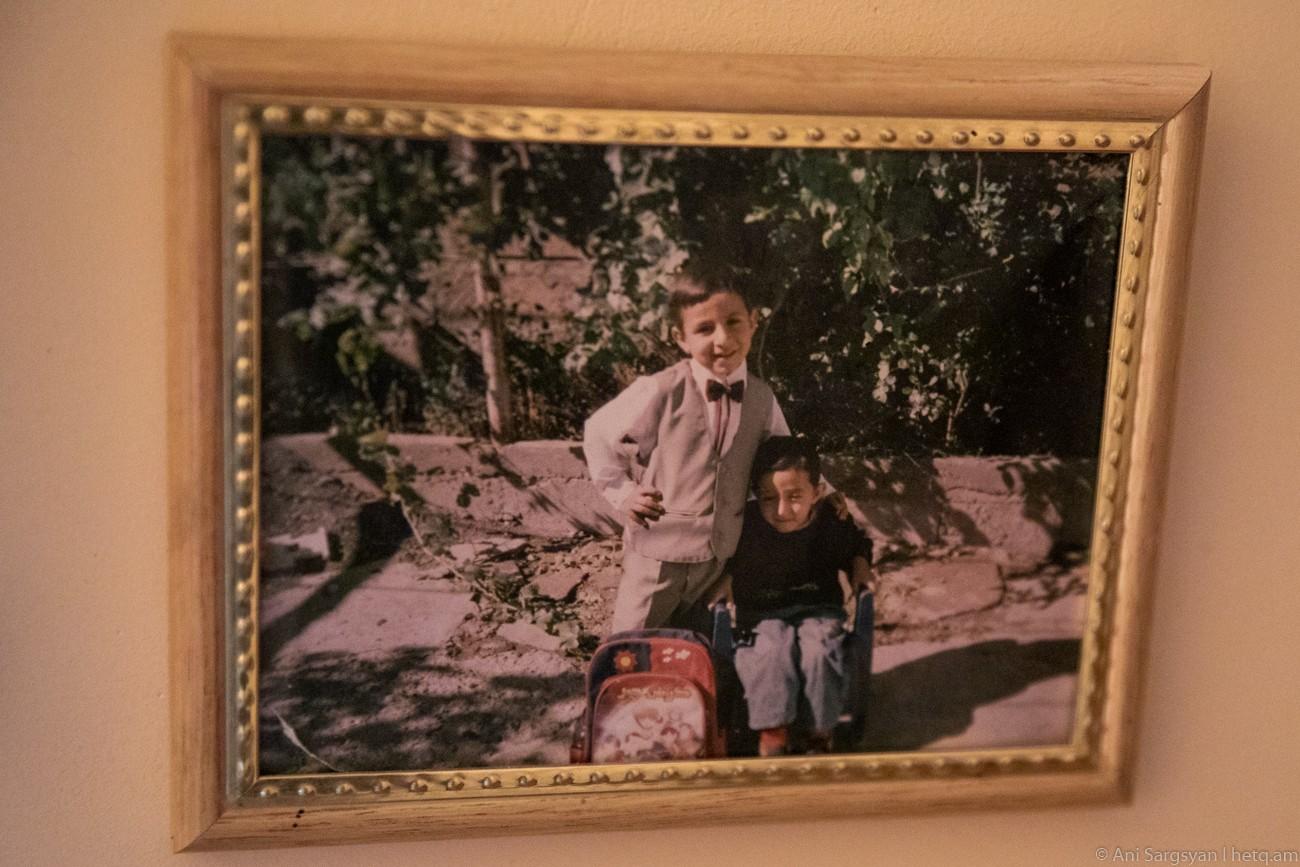 The two brothers attended clubs organized by the Children of Armenia Foundation (COAF). Emin says there ar too many clubs to mention.

To attend a COAF theater troupe, Emin traveled from Lernagog to Aragatzavan with the help of his parents.

“What performances did you stage. What roles did you play?” I ask.

"For example, we staged The Armenian Mouse, and I played the role of a cat," says Emin, looking for photos from the performances on his phone.

"There are no leading or secondary roles in the theater. In the theater, they are all leading roles," Emin answers.

Mrs. Muradyan says the brothers also attended English classes and that Vahe was getting quite proficient.

In 2016, doctors came to Armenia from Tula (Russia), but, according to Mrs. Muradyan, they did not perform surgeries in Armenia. Earlier, one of the Armenian doctors said, in earshot of Emin, that even if they operated on the boy, he would not walk on his own. The doctor said that a walker was the best option.

In the fall of 2017, with the help of COAF, Emin underwent surgery in Tula. The surgery lasted fifteen minutes. For the next three months, the boy told his mother that he was in indescribable pain.

"Before the operation, I thought he would at least stand up straight, even if he was leaning on my arms," says Mrs. Muradyan. Emin ushered in the New Year of 2018 on his own two feet. 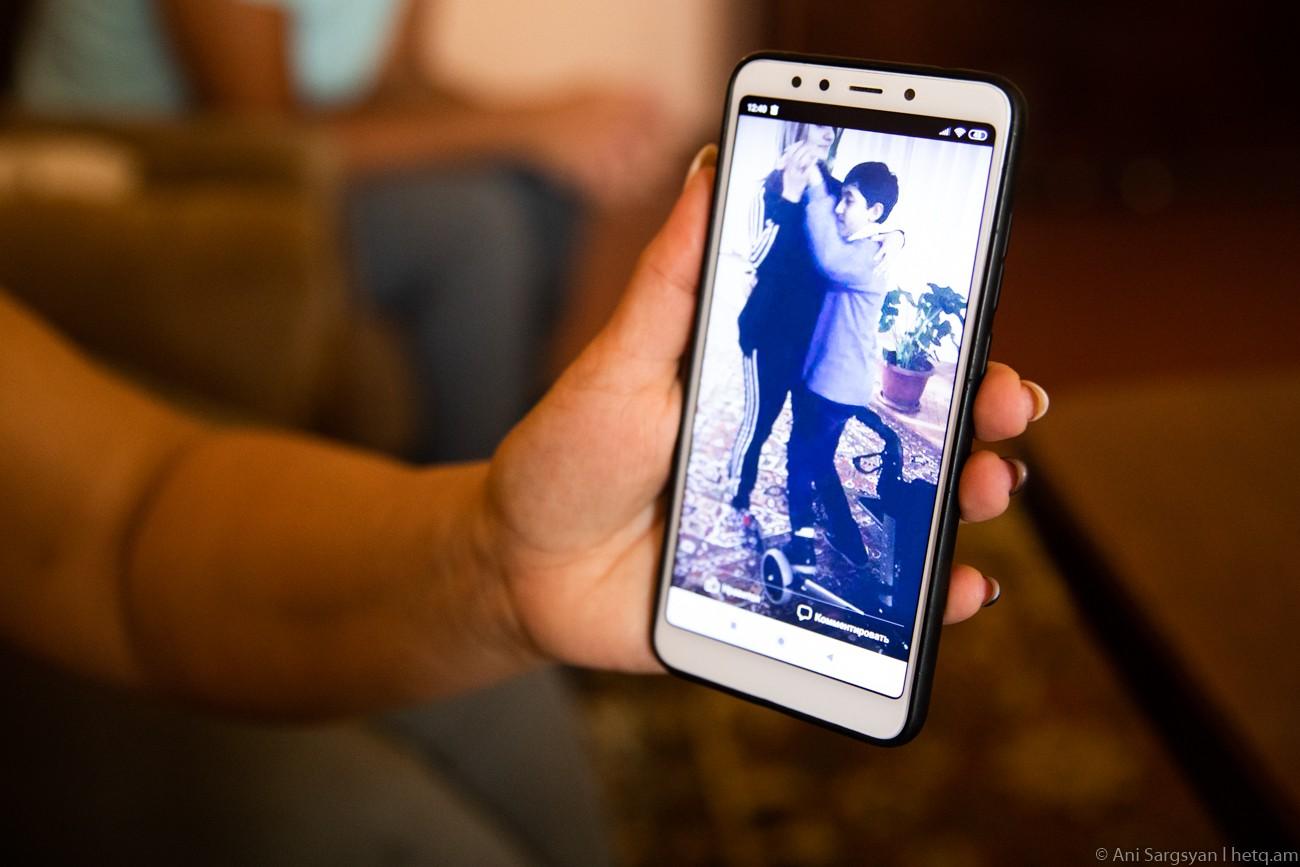 Emin shows us some photos stored on his phone. The little boy has now become a strong teenager, still showing that kind-hearted smile of his.

"Because I have just started to walk, I fall down a lot" says Emin, smiling.

"My lucky charm is my family"

Emin will finish school next year. He wants to become a sports journalist. He says he likes to talk to people and starts telling us about his interview with the famed footballer Henrikh Mkhitaryan.

“It was organized by COAF, but it was before my surgery. I did the interview at the football academy. Henrikh left an incredibly good impression on me. He was very modest. There are athletes who bask in celebrity, but he’s not like that.” 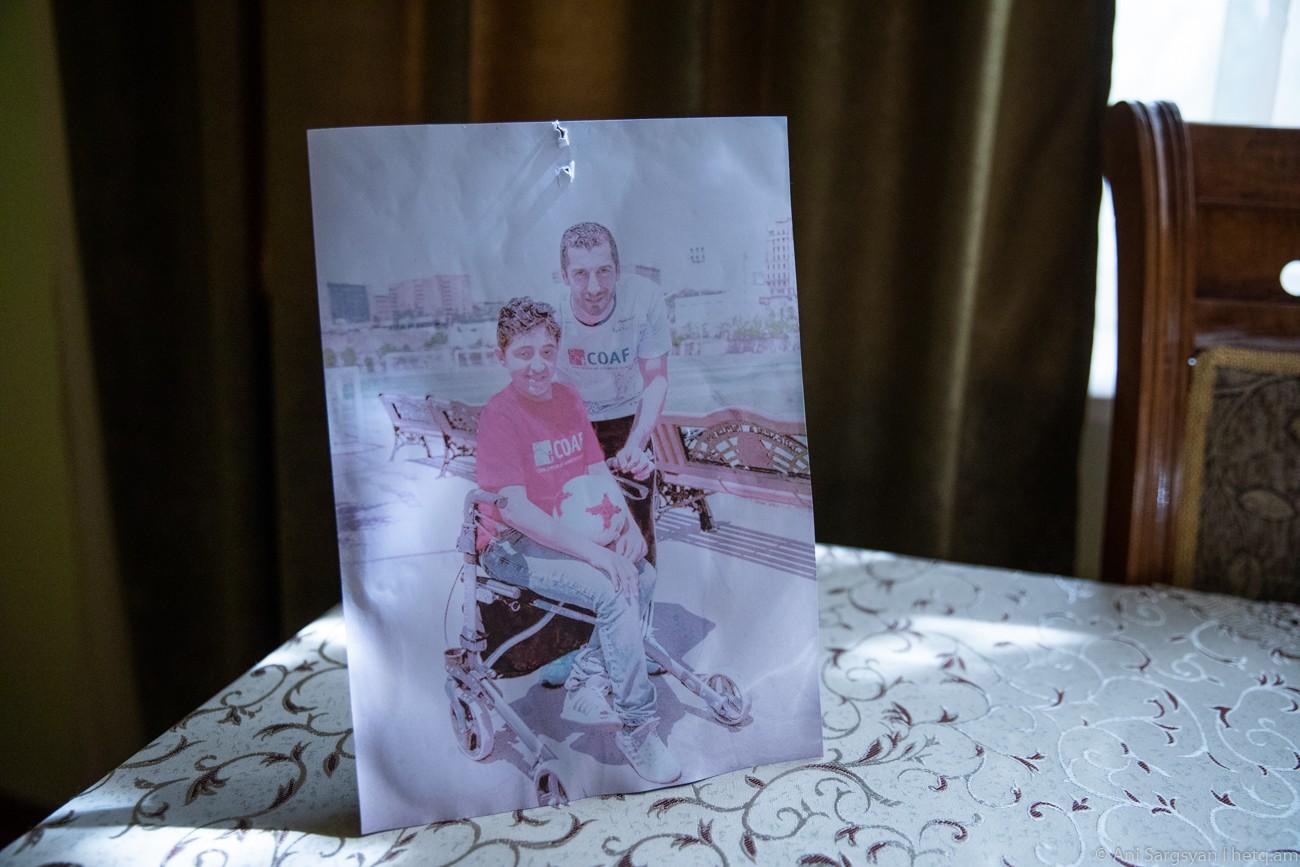 “Which of his remarks impressed you?” I ask Emin.

“When I asked him if he has a lucky charm that brings him success on the pitch, he said his guiding light was his father Hamlet Mkhitaryan, who encouraged him to be a football player."

“My family and friends”

"Wait, let me show you the shirt signed by Mkhitaryan," says Mrs. Muradyan, bringing the shirt from the next room.

"Wait, let me show you the shirt signed by Mkhitaryan," says Hasmik, bringing the shirt from the next room. 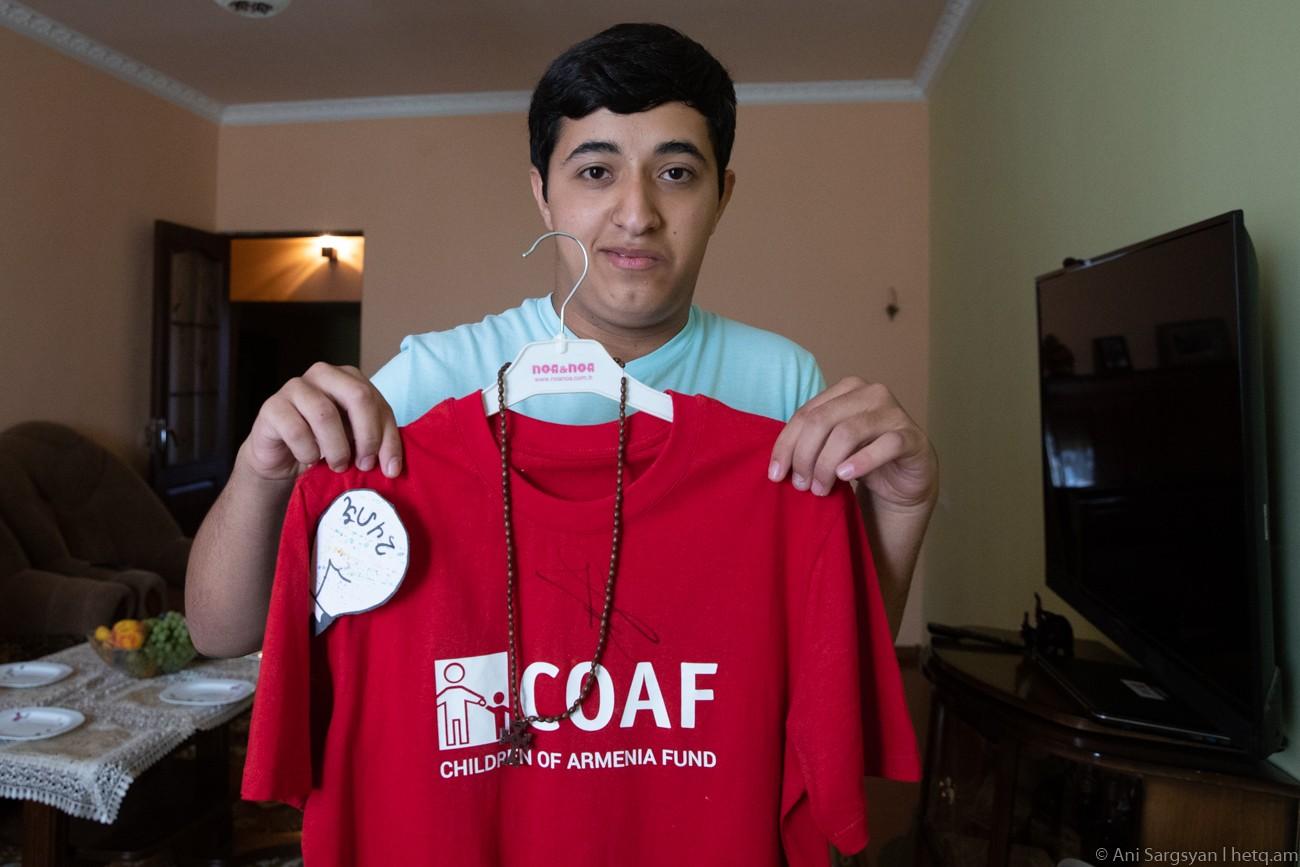 Emin recently sold this COAF shirt, signed by footballer Henrikh Mkhitaryan, and donated the profits to the Hayastan All Armenian Fund

"I want my two sons to be healthy and have a good future. And the most important thing is to have peace in the country.” This is what Mrs. Muradyan told us at the conclusion of our first meeting before the war broke out on September 27.

We ended our conversation with the family by arranging to meet after Vahe his discharge from military service next year.

Vahe was attending Yerevan State University’s Faculty of International Relations. He dropped out of school and enlisted in the army.

"Vahe is such a smart, mature, talented boy. I’m not just saying that because he’s my son. You’re welcome to visit when he returns," Hasmik said while talking about Vahe.

The war has changed all this. 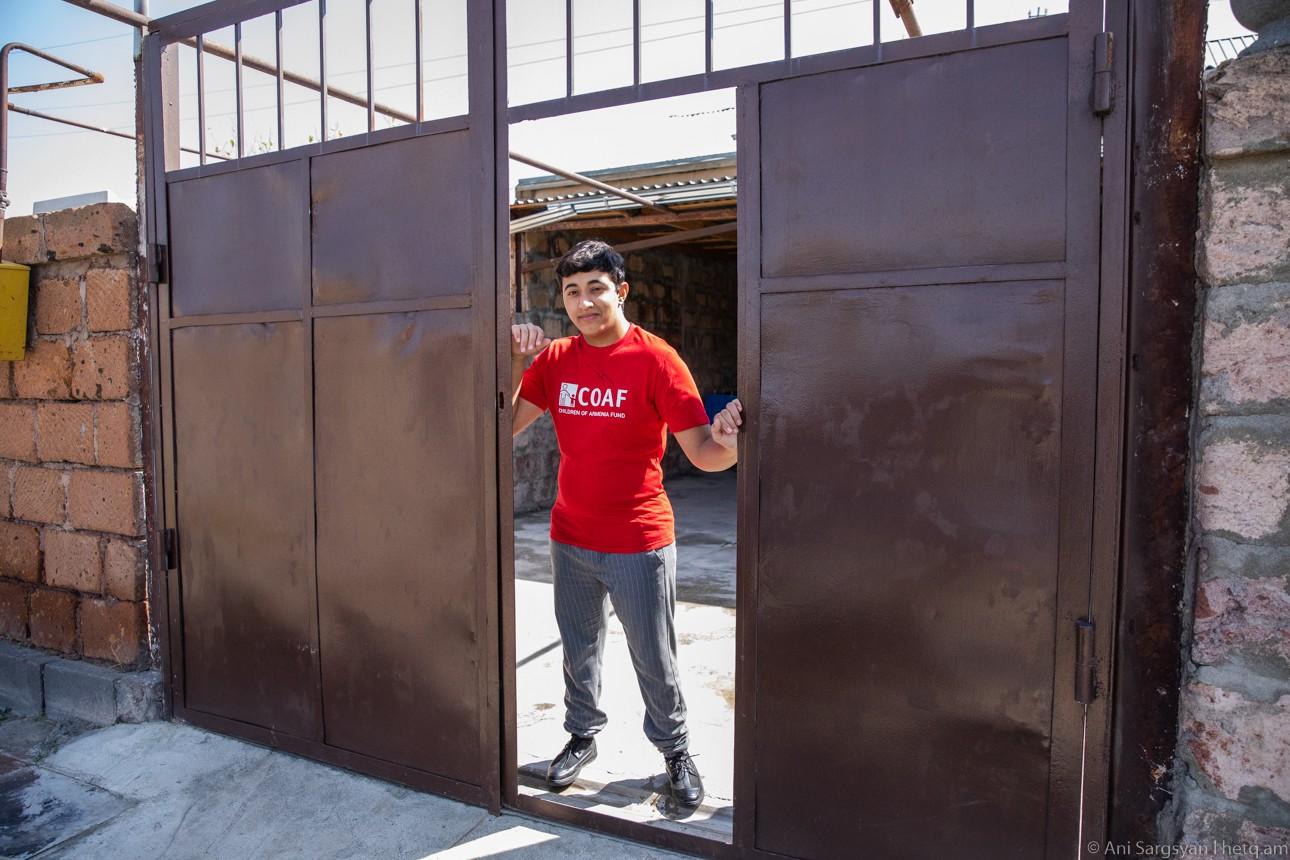 I read Emin's posts on his social network page every day. I see Vahe's photos. Writing something becomes all the more difficult.

"God took you because he needs you, but we need you more," Emin wrote about his older brother a few days ago.