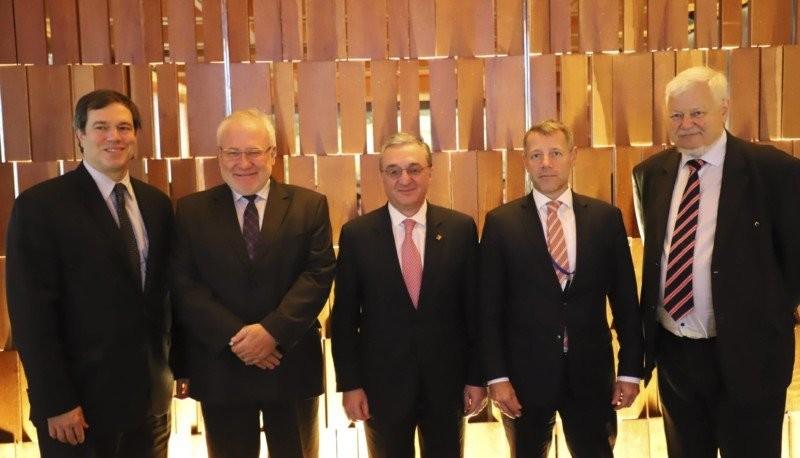 The Co-Chairs of the OSCE Minsk Group (Igor Popov of the Russian Federation, Stephane Visconti of France, and Andrew Schofer of the United States of America) released the following statement today:

The Co-Chairs urged the sides to take immediate steps to implement all aspects of the October 10 Moscow Joint Statement in accordance with their commitments, noting that they had reaffirmed these commitments with Paris on October 18. The Co-Chairs also reminded the sides of the October 1, 2020 joint statement of United States President Donald J. Trump, French President Emmanuel Macron, and Russian President Vladimir Putin, as well as the October 5 joint statement of Secretary of State Secretary of State of the United States of America Michael R. Pompeo, Minister for Europe and Foreign Affairs of France Jean-Yves Le Drian, and Minister of Foreign Affairs of the Russian Federation Sergey Lavrov, calling on the sides to cease hostilities immediately and to resume substantive negotiations to resolve the Nagorno-Karabakh conflict under the auspices of the OSCE Minsk Group Co-Chairs.

During their intensive discussions, the Co-Chairs and Foreign Ministers discussed implementing an immediate humanitarian ceasefire, possible parameters for monitoring the ceasefire, and initiating discussion of core substantive elements of a comprehensive solution, in accordance with the October 10 Joint Statement. The Co-Chairs and Foreign Ministers agreed to meet again in Geneva on October 29 to discuss, reach agreement on, and begin implementation, in accordance with a timeline to be agreed upon, of all steps necessary to achieve a peaceful settlement of the Nagorno-Karabakh conflict in accordance with the basic principles accepted by the leaders of Azerbaijan and Armenia.