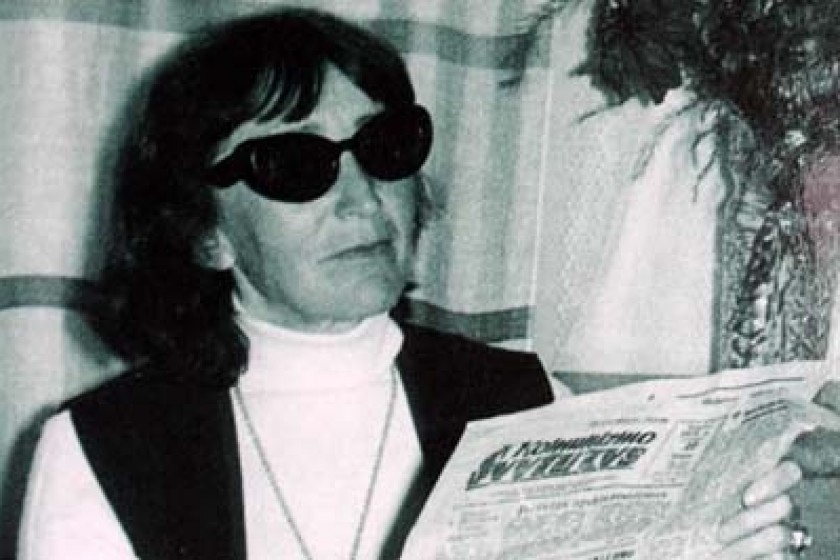 Antonina Mahari: “Like iron, I have been forged in the cauldron of many storms”

“It hurts me when people say, ‘We respect her because she’s the wife of Gurgen Mahari. If I can’t be appreciated on my own, then I have no need for the name of anyone else, if I have nothing of value that commands respect,” said Antonina Mahari, the wife of noted Armenian writer and poet Gurgen Mahari.

(Biographical note: Gurgen Mahari (Ajemian) was born in Van in 1903. In 1937, he was sentenced to 10 years in a Soviet gulag. He is best known for his autobiographical trilogy “Childhood”, the novel Burning Orchards (1966) and Charents-name (1968), memoires about Armenian poet Yeghishe Charents.)

Antonina Mahari, a Latvian by birth, has authored the books, “My Odyssey”, “Recollections” and “Recollections and Short Stories”. She’s also a member of the Armenian Writers Union and continues to write. She resides in Yerevan, on her own, and receives a monthly pension of 10,000 AMD ($26) and a welfare allowance in the same amount since she lives way below the official poverty line. Mrs. Mahari also gets 5,000 from the Writers Union. The Union pays the same amount to all its members.

Not enough money to heat her home in winter

Given her lack of resources, Mrs. Mahari couldn’t afford to heat her house this winter and wore several layers of clothes instead. “I have an electric heater in the bedroom. When it’s time to turn in for the night, I turn it on for a brief while. Electricity is quite expensive, but dear God, I have to pay the bill. I pay about 10,000 AMD for electricity in the winter and a bit less in the summer,” she says.

While her monthly income only amounts to 25,000 AMD, Mrs. Mahari has never sought outside assistance.

“I’ve never applied for or requested any help. I get by on what I have. Even if I did apply, who would assist me? Who should I apply to anyway? Who among the locals would ever assist me?” she asks.

She notes that her late husband has relatives here in Armenia and that she’s on good terms with them but they are also in tough financial straits and can’t help her out.

“Vardan Ajemian, was a wonderful man, a theater director, a prominent person. He was a close relative of Gurgen’s on his father’s side. He even looked like Gurgen. After Gurgen died in 1969in Latvia, he would always come to the house and assist me whenever he could. Now, he’s gone too,” says Antonina Mahari. 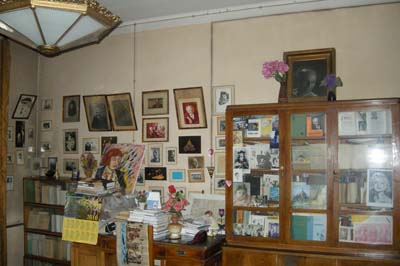 After Gurgen Mahari died, his widow turned one room of their house into a museum of sorts. There are many pictures of friends and family and articles about the writer clipped from the papers.

“I wanted to keep his memory alive. Those who visit say that it’s as if Gurgen is here in this apartment and that he’ll walk through the door at any moment. His old pals were really impressed,” she said.

Mrs. Mahari says that many notable individuals from Armenia and overseas have visited the small museum. She’s quick to note that no one from the government, including the Ministry of Culture, has ever visited the house. Prior to the financial crisis, there were many Armenians from the diaspora who would visit and help Mahari’s widow.

“There were many people from abroad who came here because they appreciated the work of Gurgen Mahari. Sometimes, they’d hand me $100 or so. That was a big deal for me. Only the foreigners would help out, never locals, said Mrs. Mahari, adding that people sometimes pay her for the writer’s books.

She says that was Mahari who requested that his wife write his biography.

“Antonina, you’re the only person in this world who knows the truth about me. Write it all down. I want people to know,” recounts Mrs. Mahari.

She was exiled to Siberia and met her future husband there 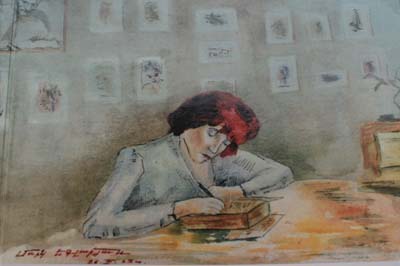 She points out that “My Odyssey; From the Green Fields of Lithuania, through Exile in Siberia, to a New Life in Armenia”, an autobiographical work she  wrote in 1972, was hidden away during the Soviet years and was only published in 2003 with help from the president of the Writers Union. The book was been translated into English. All the books she has written about Mahari are in Russian. “Recollections” is now being translated into English as well.

“I lost everything; my country, my parents, everything. In Gurgen, I was searching for a father, a brother and good friend. I found all that I wanted in him. To only have found a husband would have been pretty boring. You also have to friend a friend, a person that understands you. He penned my poems and books dedicated to me and would always sign them, ‘To my honored friend Antonina’, never merely ‘To my wife’,” she said.

Antonina Mahari (née Povilaytinen), then a student at the Law Faculty, and Gurgen Mahari (Ajemian), first met in Siberia.

“I was very young when they arrested me. What followed was ten years in jail. I had turned 29 by the time I was released. I was arrested for belonging to an underground students’ group called Freedom for Latvia. What was wrong with a bunch of students wanting freedom for Latvia? The Soviet authorities persecuted us and wanted to erase the Baltic States. There was a great Armenian painter there as well, Ashot Sanamyan. He had been arrested for membership in the Independent Armenia secret organization and spent twenty years in prison. I have written about him too,” says Antonina Mahari.

Gurgen Mahari had been arrested and charged for belonging to a “terrorist” organization that was plotting to kill Lavrentii Beria, Stalin’s notorious police chief. His wife says that Mahari didn’t even have it in him to hold a rifle.

“When we met, he was tending a flock of pigs. He later became seriously ill. Even the doctors had given up hope. They had transferred him to a hospice to die. Mahari sent me a note to come to his bedside. I went and did whatever I could to take care of him. He would say, “Let me just spend one year with you, just one year’. I wished for the same, but we wound up spending sixteen years together. He was still young when he died,” Antonina Mahari said.

She spent ten years in Siberia and Gurgen Mahari survived for seventeen. They were released together. They married in Siberia and then moved to Armenia.

Antonina and Gurgen conversed in Russian 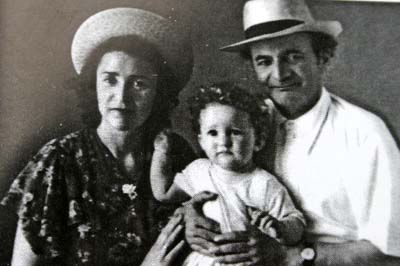 Mrs. Mahari notes that while the two always conversed in Russian, and not their native tongues, they understood one another top a tee. She is also fluent in English and Polish but describes Armenian as a fairly difficult language. “They kept me from learning Armenian and told me that even college graduates can’t speak or write Armenian correctly. I then thought to myself that I would never be successful at learning Armenian and gave up all hope of doing so,” she recounts.

The couple would frequently travel to Latvia during the summer. Mrs. Mahari describes those visits as the happiest time of their lives.

“Latvia both welcomed and respected Mahari. When he visited, the Latvian papers would write that ‘the great Armenian writer Mahari had arrived with his Latvian wife’. It was like a fairytale come true. They were very interesting times. We stayed in Moscow hotels and hosted many friends, including William Saroyan,” she says.

It’s her opinion that the real cause of her husband’s death, despite his many ailments, was the novel “Burning Orchids”. She says that criticism of the novel hurt the writer on a deeply personal level.

“There is nothing worse than when a writer’s books and creations are left to rot and turn to dust. It’s like your children are being buried. I was the only one by his side, encouraging him on. They seized his book, “Burning Orchids”, and went so far as to burn them. Today, speculators and businessmen have realized that they can make a profit on the book; crass literary business. One must distinguish between those who support literature and those who are literary profiteers. Then publish just to make a buck,” argued Mrs. Mahari.

In the early 1990’s, when socio-economic conditions hit a low point in Armenia, Mrs. Mahari was forced to sell many of the books in her library. They paid her for her English books but received nothing for “Burning Orchids” or “Barbed Wire in Flower”

“It’s very odd. When I took “Burning orchids”, I thought they pay a lot for the book. The buyer spun around, looked at the book and said. ‘So what? The man wrote this book years ago but today, no one is interested’. Afterwards I took the other book, “Barbed Wire in Flower”, that one an award after Gurgen’s death, to the shop. The girl there said that they had already had the book. I didn’t get a dime for his books,” said the late writer’s wife.

Of all her husband’s work, Mrs. Mahari says she likes his autographical trilogy, (first part, “Childhood” was published in 1929, and the third part was finished in 1955) which tells his story of survivor and the tragedy experienced by Armenians in Western Armenia.

“You’ll find it all in there; everything about the 1915 Genocide. I have experienced the entire Armenian calamity in that book. In his last book, “Burning Orchids”, I don’t see the Genocide but rather political intrigue,” she says.

Gurgen Mahari lost his mother and wound up in an orphanage. He later found her in Tbilisi, working in a hospital. The writer would often tell stories about western Armenia and Van, where he was born, to his wife.

“Vay, vay, vay, Antonina, you just cannot imagine the flowers and fruits of Van. If only I could go there and rest awhile under a tree. I’d be cured of my ailments. Van, Van, Van; he really missed the town of his boyhood. That city of his birth was the dearest thing to him in this world. He always dreamt of going back. The stories he told,” said Antonina.

Three years ago their son died. Their daughter, Nazik, died when only six months old on the trip from Siberia to Yerevan. Mrs. Mahari says that she would often take walks with her son, also named Gurgen.

These days Mrs. Mahari also likes to walk around Yerevan and do some window shopping. At home, she prefers to read the papers and occasionally watch TV.

“In any event, I have been tempered in the eye of many storms. Thanks to comrade Stalin. Like a soldier that survives a great battle, I too have made it out alive,” said Antonina Mahari.

PS – Antonina Mahari refused to be photographed for this article. She argued that what is important is her past, not the present.