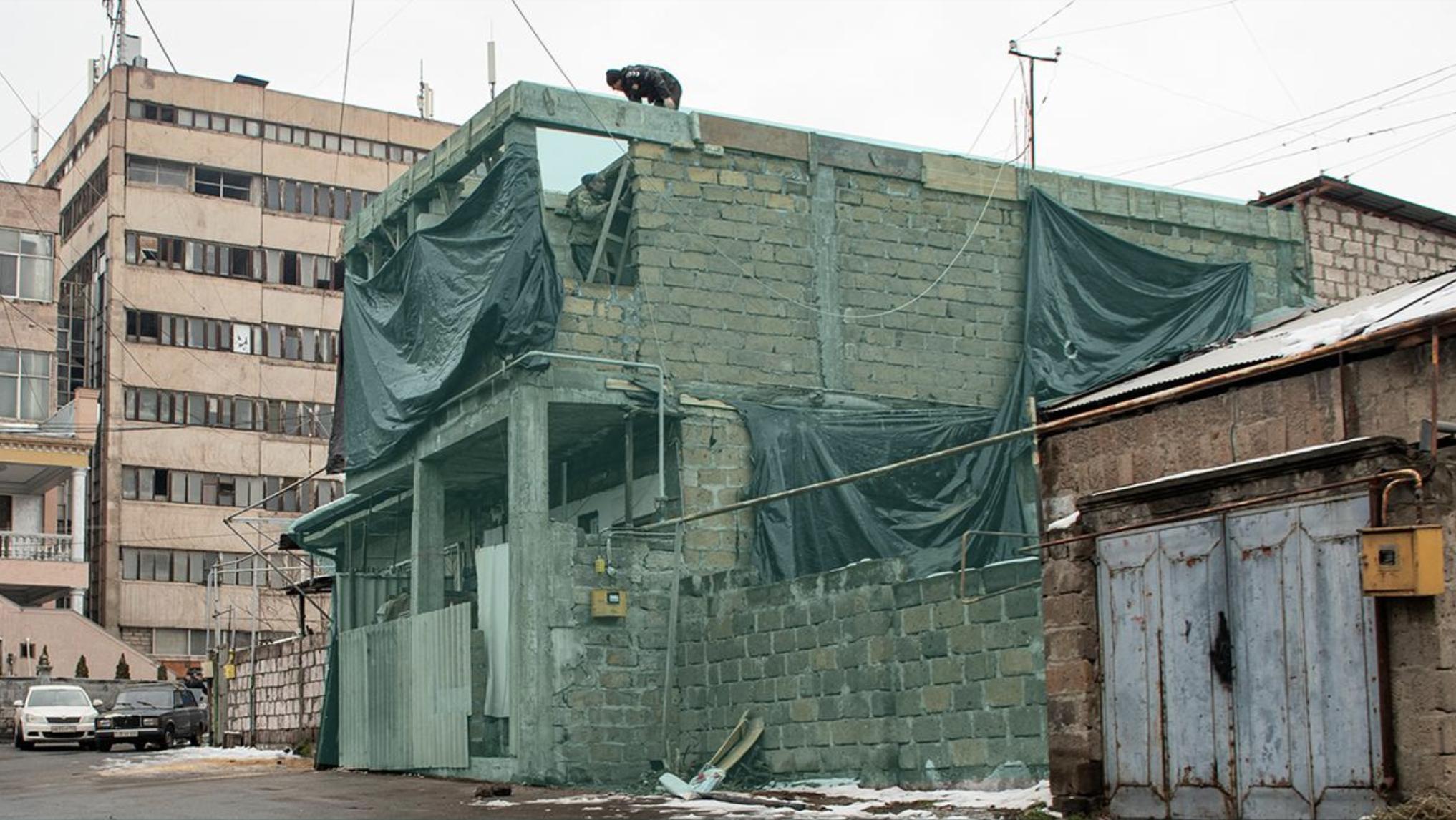 Narine Mkrtchyan has been fighting the illegal construction near her house in Yerevan since 2018. The construction started in the post-revolutionary period and was brought to life in 2020 during the war in Artsakh. In both cases, this occurred during periods when there was no oversight.

In 2018, at 12 Nerkin Shengavit in front of School N97, resident Arayik Harutyunyan started carrying out illegal construction. He attempted to reconstruct his one-story building into a two-story one. Narine Mkrtchyan, who was living in the immediate vicinity of the area under construction, called the municipality’s hotline from the very outset. On the same day, the municipality came and dismantled the wooden support beams needed for the concrete mortar. According to Narine Mkrtchyan, the developer waited for another convenient time to continue the unfinished business, and the war that broke out in Artsakh provided this new opportunity for him. That time, a neighbor even asked Narine Mkrtchyan not to protest the construction.

“I said you should be fighting in the war. No one thinks about building a house at this time. And that’s when they started building the house,” Narine Mkrtchyan recalls of her conversation with her neighbor. 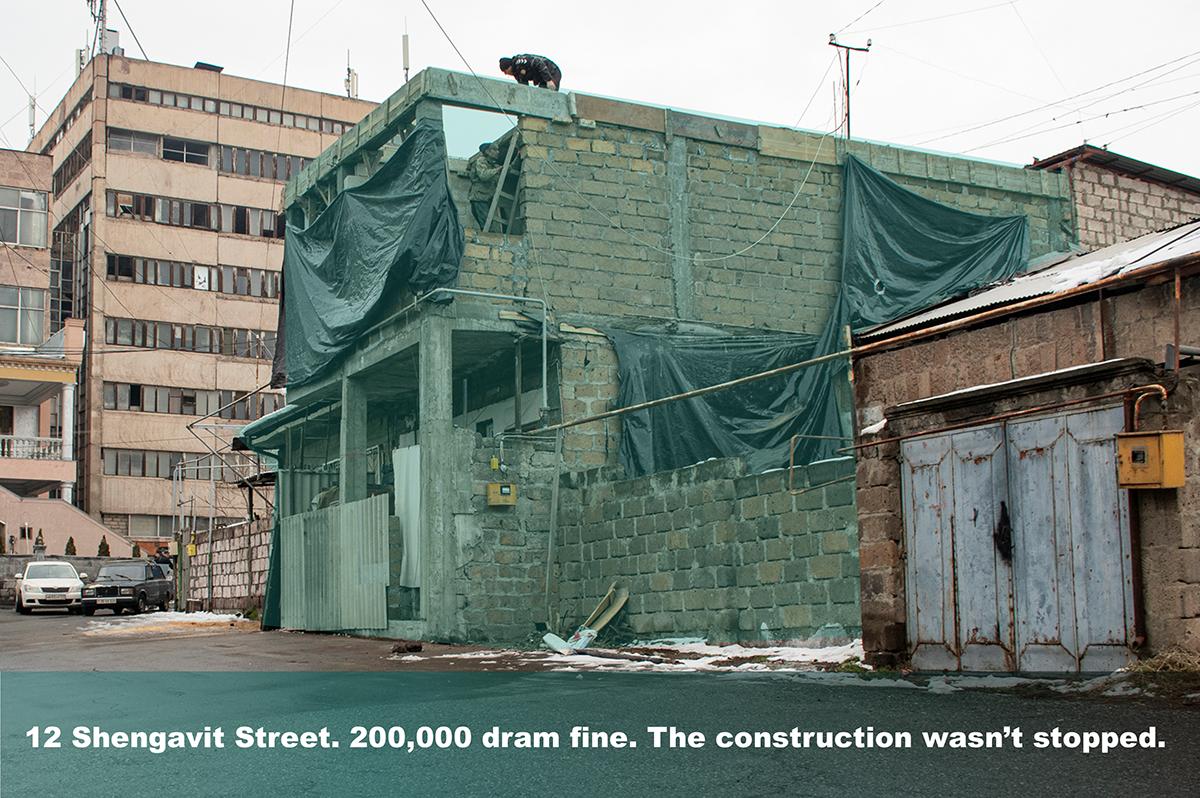 Narine Mkrtchyan thinks that the illegal construction was not overseen for several reasons. Either they were sponsored or the staff of the administrative district showed criminal inaction. Either that or they resorted to the old way of doing things: They gave a bribe. The fact that there was no oversight after the illegal construction was recorded and a fine imposed gave rise to such assumptions. Conversely, a fine imposed that was several times larger might have restrained the offender.

"It doesn't matter if it’s a house being built illegally or a palace. If something is done illegally, it should be punished. They should either punish me for the false declaration or punish those people," says Narine Mkrtchyan. In response to our inquiry, the Yerevan Municipality said that informal construction of reinforced concrete pillars and beams was carried out and that a protocol was drawn up, on the basis of which an administrative fine of 200,000 drams was imposed.

Statistics on cases of illegal construction in Yerevan

According to information provided by the Yerevan Municipality, 153 cases of illegal construction were registered in the capital during the war (September 29 to November 10).

In 17 of these cases, a decision was made to dismantle construction or crackdown on land grabbing. Fines were imposed in the rest of the cases. Some of those who carried out illegal construction were fined twice.

Construction was carried out at 2 Heratsi Street with deviations from the agreed design. At the above-mentioned address, the building of the former school named after Hrachya Acharyan has been under reconstruction since 2013. The state-owned building and its plot of land were allocated to the Collective Security Treaty Organization (CSTO) Academy Foundation for free use. In 2018, part of the state-owned land was transferred to the Foundation for the construction of a hotel, and land in the same area that was owned by the Foundation was transferred to the state. In 2014, an agreement was made with the Yerevan Municipality regarding a hotel blueprint. During the war, on October 9, the employees of the municipality reported that the construction was carried out with deviations from the agreed blueprint. 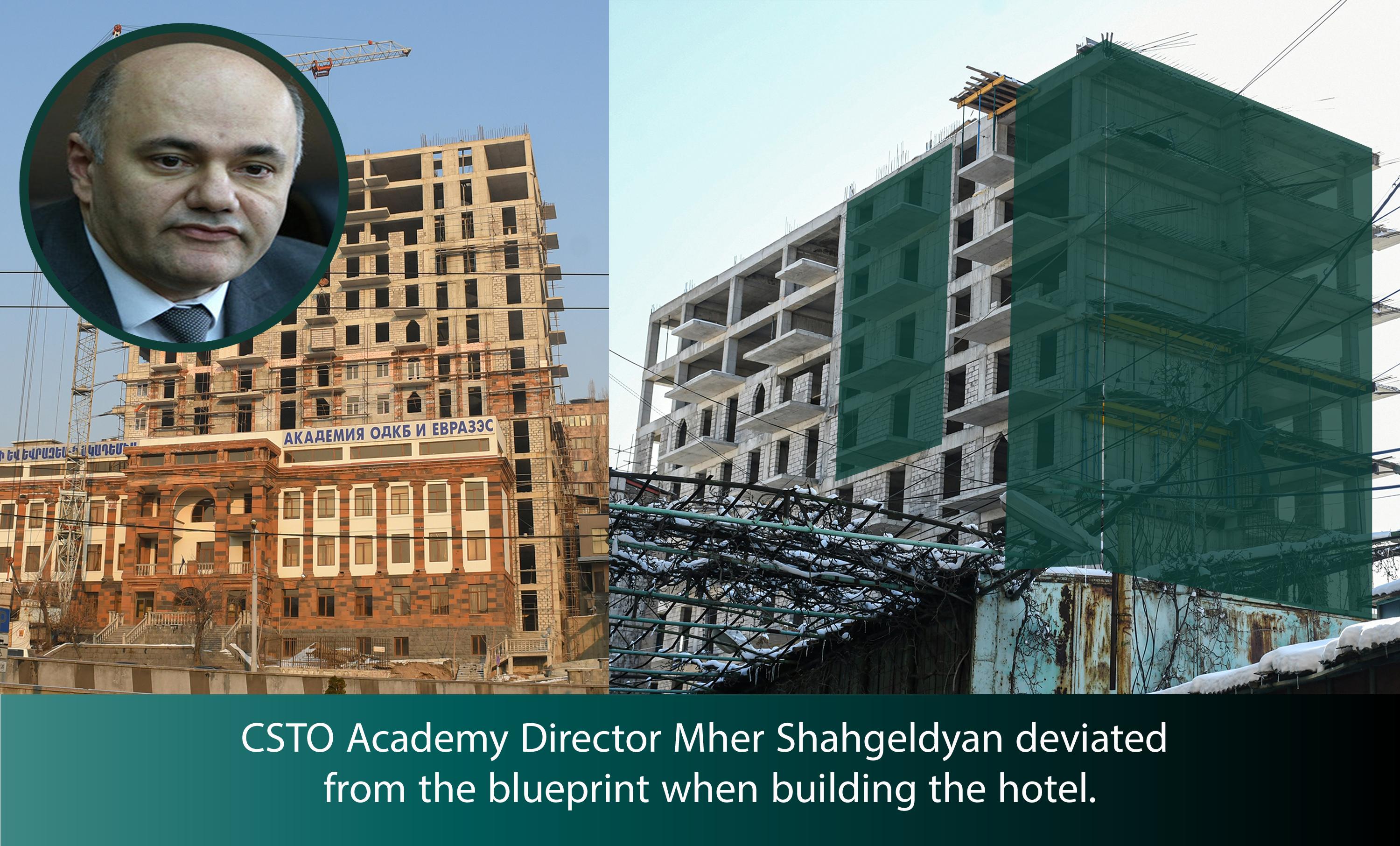 With the help of Google Earth, we were able to uncover that the CSTO Academy was reconstructed in phases. As of 2019, there were no deviations from the blueprint. In one year, work took place very quickly, and construction was carried out that was outside of the agreed blueprint. Work was carried out to build more floors on a section not intended for construction, and the section of the building that was supposed to have a triangular shape was instead constructed as rectangular. This has resulted in the CSTO Academy receiving a multi-story building that is more spacious, while the average market value of one square meter built in the center of Yerevan is $1,500. The director of the CSTO Academy Foundation is Mher Shahgeldyan, former member of parliament and member of the Orinats Yerkir (Rule of Law) political party. The founders of the Academy are former CSTO Secretary General and former Chairman of the National Security Council of Armenia Nikolay Bordyuzha and former Chairman of the Orinats Yerkir Party Arthur Baghdasaryan.

If the employees of the Yerevan Municipality had exercised proper oversight over the construction, then it would have been clear that the construction was deviated from at the outset before a 10-story building was constructed. Instead, the violation was registered after the completion of key construction works. 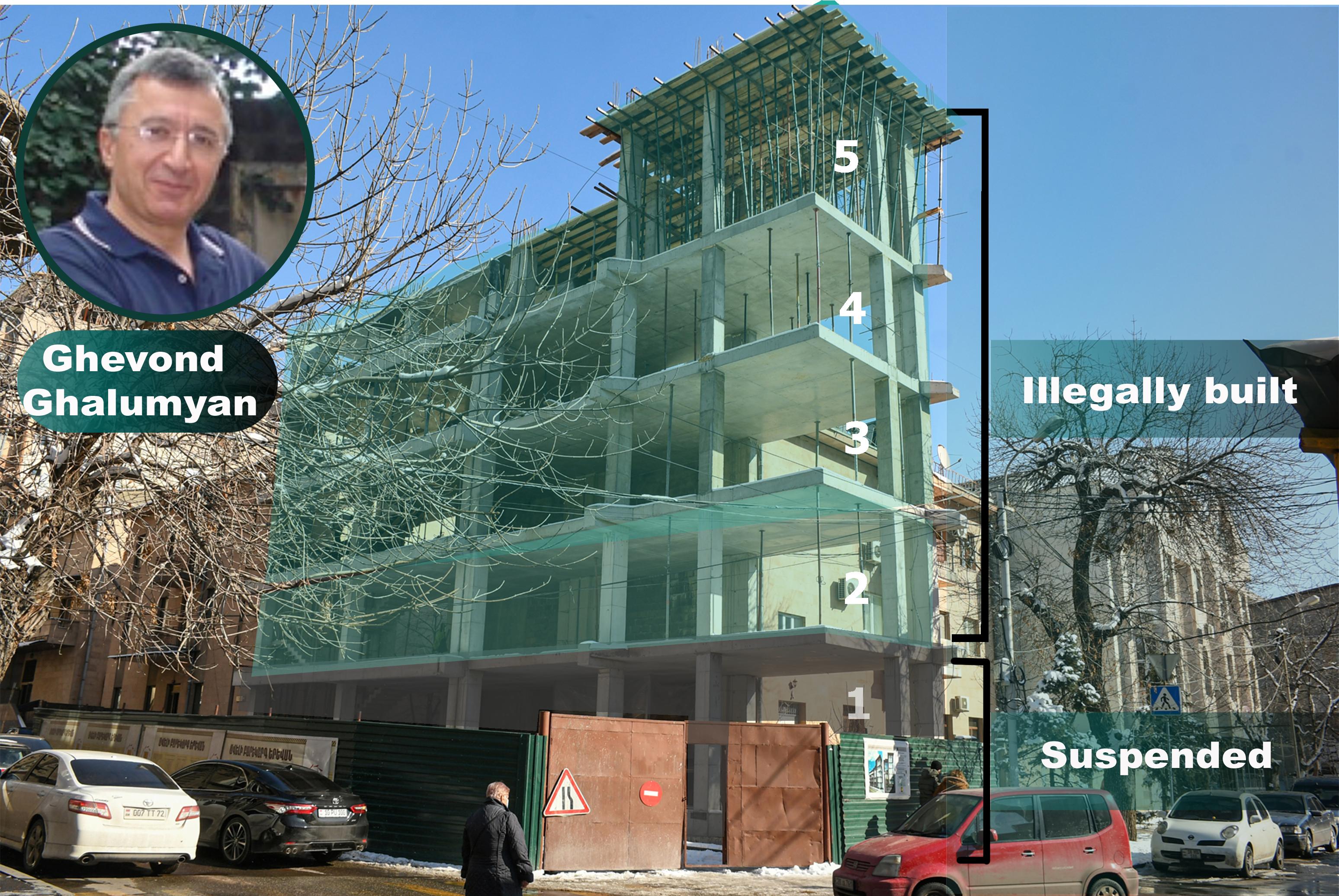 Ghevond Ghalumyan is the former colleague of diasporan Armenian businessman Edmond Khudyan. He is accused by Khudyan of robbing the company he jointly created. Ghalumyan is a retired police colonel who is currently carrying out construction activities. 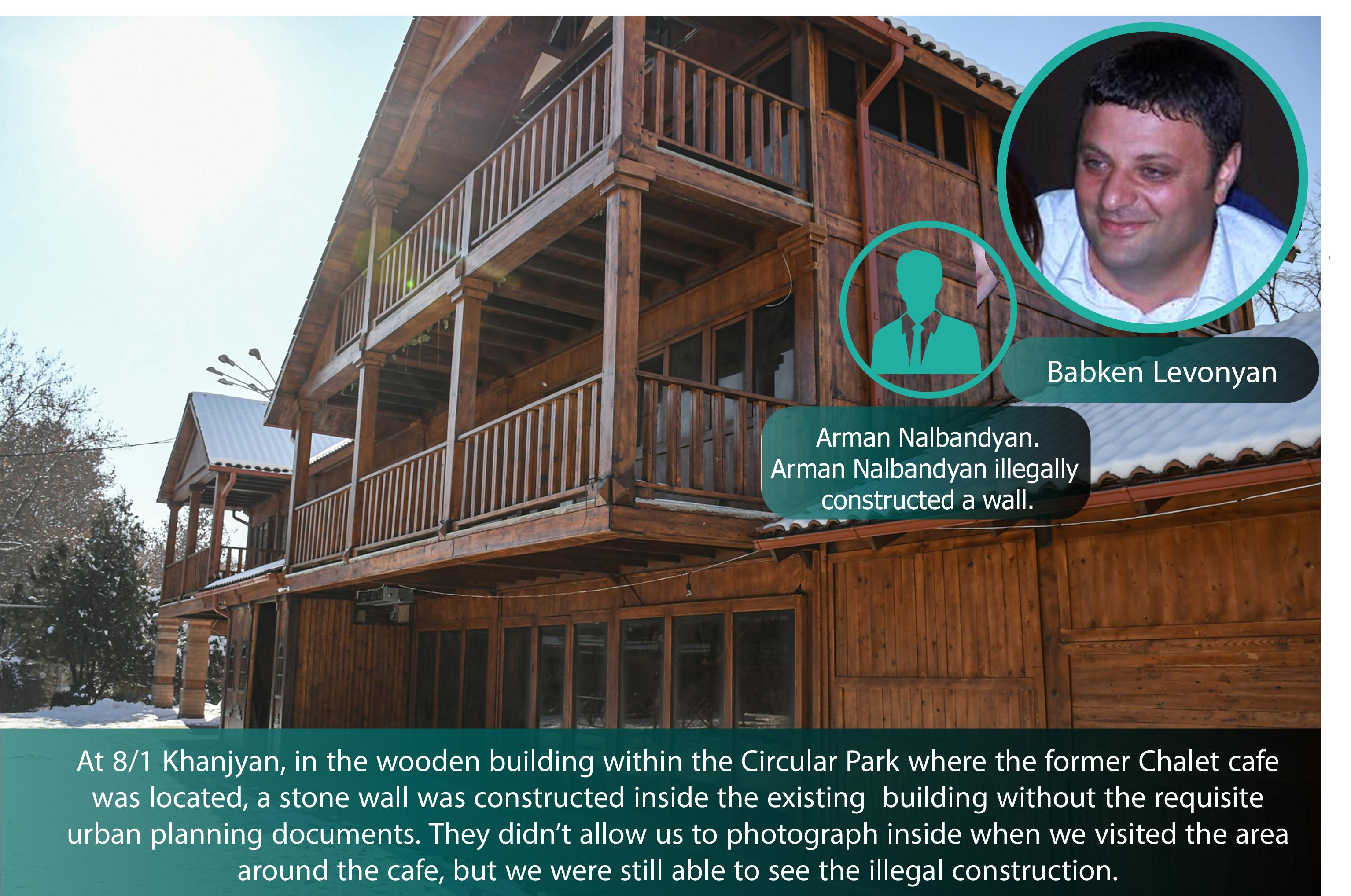 At 8/1 Khanjyan, in the wooden building within the Circular Park where the former Chalet cafe was located, a stone wall was constructed inside the existing building without the requisite urban planning documents. They didn’t allow Hetq to photograph inside when we visited the area around the cafe, but we were still able to see the illegal construction.

The plot of land in Yerevan occupied by the cafe was rented by citizen Arman Nalbandyan, who was fined 200,00 drams by the municipality for illegal construction. Arman Nalbandyan, in turn, leased the areas to Korvet-E LLC. Babken Lyonyan, who was inspector of the Zvartnots Customs House, owns 100% of the company's shares. In 2013, Babken Lyonyan along with other inspectors illegally imported 17.6 million drams worth of mobile phones and computers to Armenia for personal gain, failing to carry out their service duties. Lyonyan, his colleague, and other people were convicted for that in 2014. Previously, Chalet cafe was SIL Concern, which belonged to businessman Khachatur Sukiasyan's family. Concern Director Edgar Mkrtchyan told Hetq that the area has always been leased and has had a number of different tenants. According to him, the municipality informed them about the works carried out in September and October. They also learned from the tenant about what had happened. It turned out that an inner wall had been renovated. They demanded that the construction be stopped and the original appearance restored.

At 3/20 Tbilisi Highway, the director of Kaer Build LLC carried out works on reinforced concrete foundations and metal constructions without the requisite urban planning documents. Reconstruction of the existing building in the same place was also carried out, in particular, the expansion of metal structures, building of reinforced concrete foundations, and construction works. In both cases, the municipality drew up a protocol on the same day and then imposed a fine of 200,000 drams (400,000 drams in total) on Karen Karakhanyan, the director of the company.

Hetq visited the fenced area belonging to Kaer Build that was located on Tbilisyan Street. There was no need to enter, as the concrete tower and the adjacent buildings – constructed without a building permit – were visible from the other side of the fence. On the one hand, the company carried out illegal construction; on the other, it applied to the Ministry of Environment with a request to approve the project with an allowable emissions limit. The draft states that there are no school facilities near the area, while the map attached to the document that was submitted by the company shows that they are directly adjacent to the Yerevan Regional State College N1.

One hundred percent of the shares of Kaer Build LLC belong to Aida Hovhannisyan, who also owns 50% of the shares of N & S Construction, while 12.5% of the company’s shares belong to Armine Yeghiazaryan, the wife of the former head of the National Security Service Investigation Department Arthur Aghajanyan. N & S Construction LLC was among the companies that donated garbage trucks to the Yerevan Municipality in 2019. Samvel Manijoyan, one of the shareholders of this company, carried out illegal construction at another address. 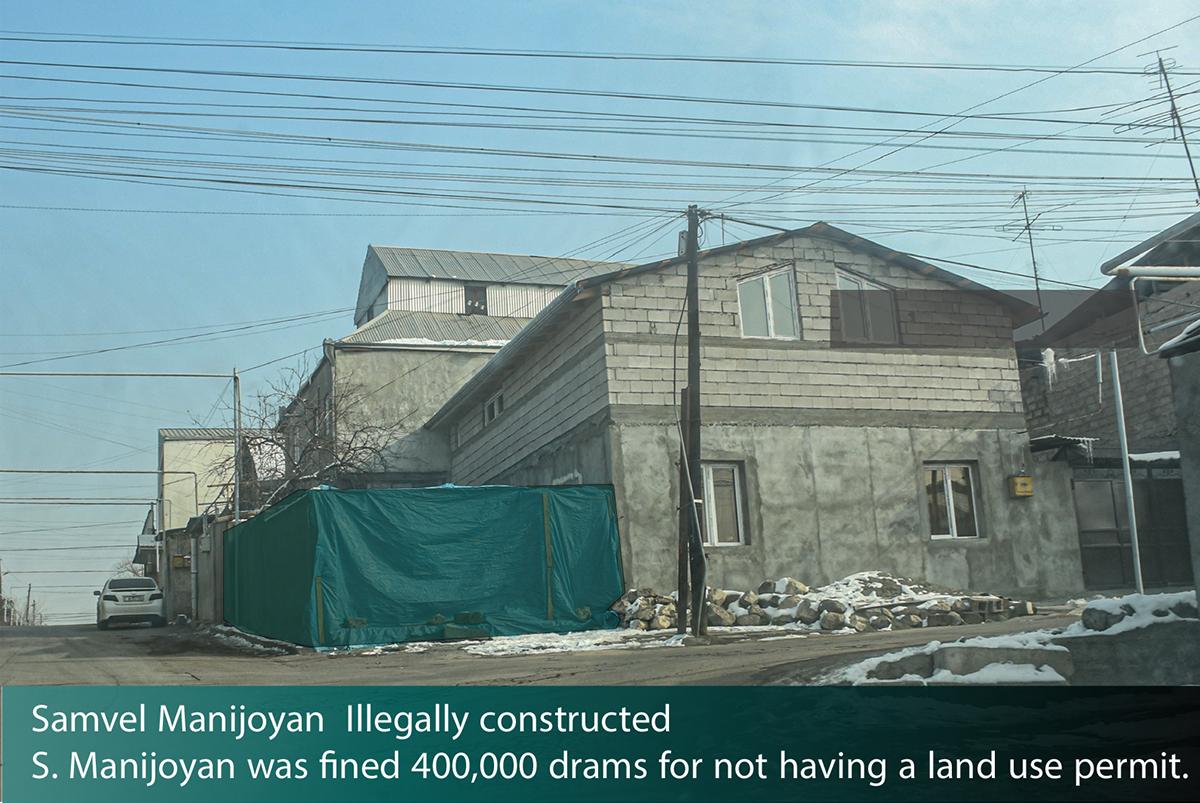 Samvel Manijoyan carried out construction of a stone-lined wall and reinforced concrete columns near the residential house at 4 Shahumyan Street #45 in the Malatia-Sebastia Administrative District without the requisite urban planning documents. The municipality fined Manijoyan 400,000 drams, as he did not have a land use permit. In other words, he did not own the land, nor did he rent it. The construction carried out on public land was still standing at the time of our visit; it had not been dismantled. 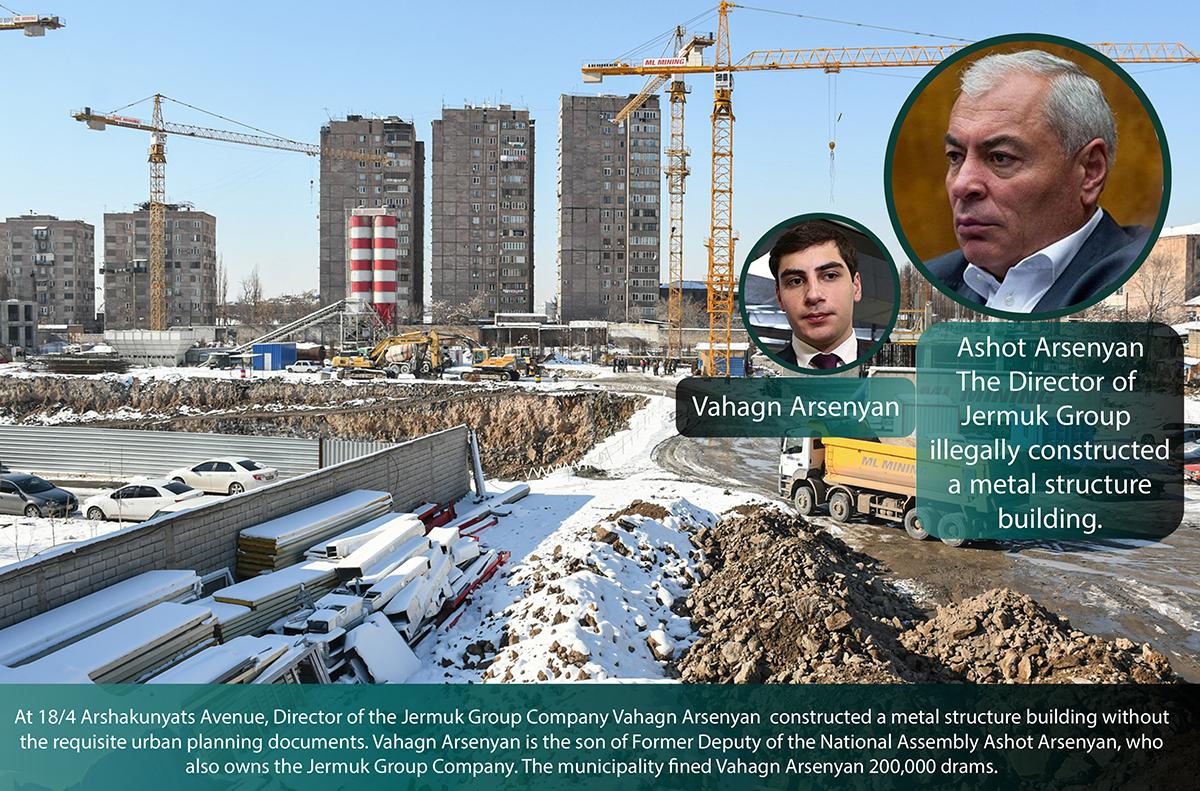 Deputy Head of the Yerevan Municipality Department of Urban Planning and Land Control Arman Ayvazyan told Hetq that if the construction is not stopped after the second fine, then the municipality can submit a report about the crime to law enforcement.

You can watch our video interview with Armen Ayvazyan on issues related to oversight, legislation, and illegal construction.