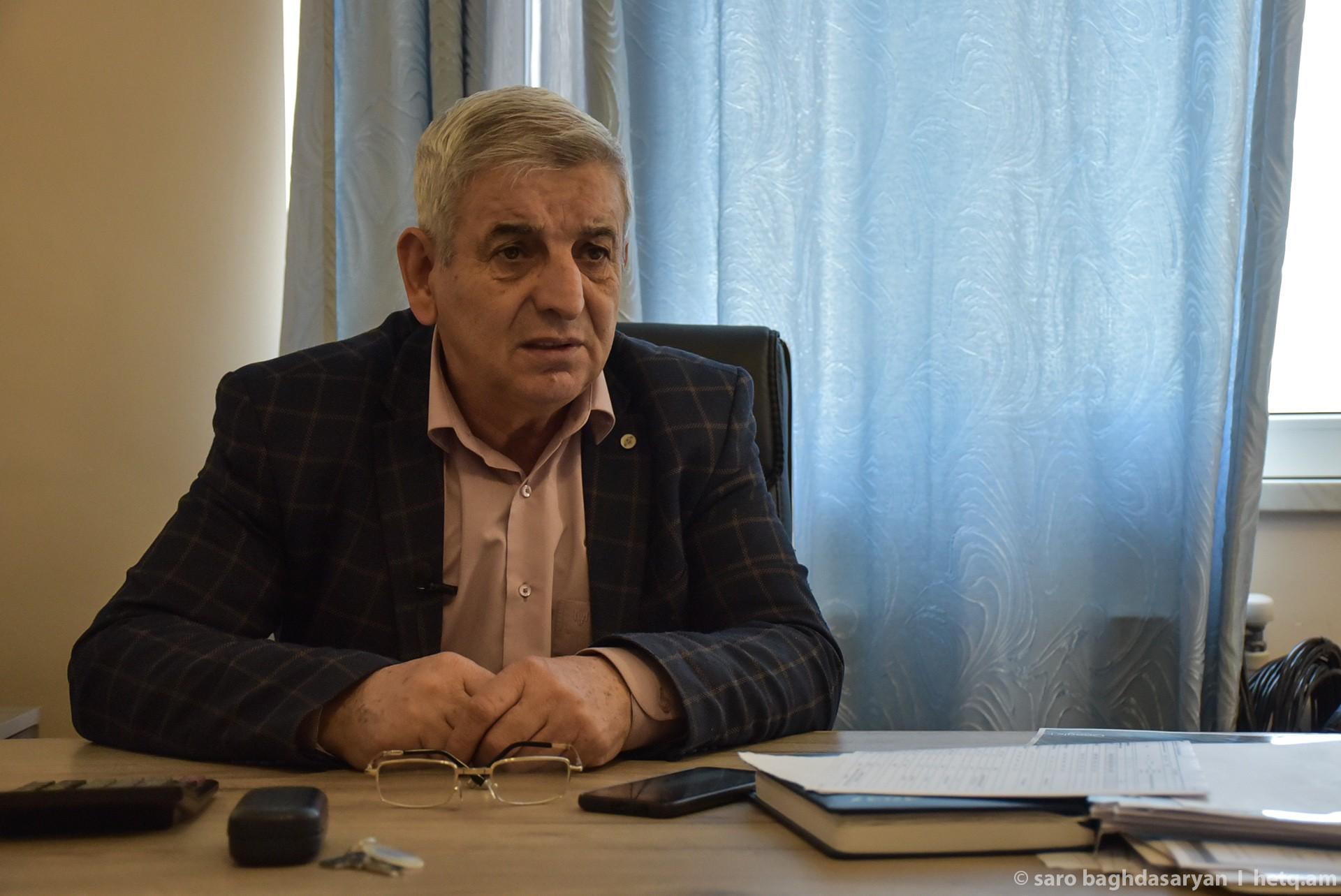 Hetq spoke with Grisha Hovhannisyan, Head of Artsakh’s Shushi District Administration, about the social, housing, resettlement and other issues faced by displaced residents of villages in the district now under Azerbaijani control. We met him in a Stepanakert hotel, where the administration staff is temporarily housed.

Can you tell us how many people have been displaced from the Shushi District? How many are now in Armenian-controlled Artsakh? What’s the situation in the villages that are under the control of Artsakh?

On September 27, following the war unleashed by Azerbaijan, residents of Shushi, Kirsavan and Karin Tak communities were displaced. Before the war, we had 2,100 families in those communities. Today, the number of displaced people is 6,500, of which 5,000 are in the settlements of Nagorno Karabakh. More return daily. We have an information headquarters on Nzhdeh street that deals with the daily social concerns of the displaced residents in Armenia. We have 335 families today in Armenia - 1540 inhabitants.

The data changes every day because they have a great desire to return. The main reason for the residents not returning is the issue of housing. All the hotels in Stepanakert are full.

The government is making efforts to turn large two-story private houses into hotel complexes so that we can accommodate the residents. Our main task today is to provide the people with housing. After that we, must provide them with land.

Four villages are left under our control. It is Yeghtsahogh community with its two villages. A family has returned to Kanach Talar. We have 77 inhabitants in Yeghtsahogh. The school has opened with nine students. There were fourteen before the war.

Is normal life restored in Yeghtsahogh?

Yes, we have restored everything, gas, electricity, infrastructure. Life is normal there. Then comes the Hin Shen, where there are 83 inhabitants. The school is open with eight students. All the infrastructure is there. There was no communication link.

The TV tower, you know, is on the border with the Turks. We have built a new TV tower. The security issue is of some concern related to the raising of livestock and pastures. These are the communities of Metz Shen and Lisagor. The school in Metz Shen is not open since there are no children. Some of the houses have been looted by our mobilization forces, by our Armenian soldiers. That's why we need a partial renovation there so that the people can return. We opened the school in Lisagor community with three students on February 1, to instill hope in the people to return. The situation in Lisagor is disgraceful in terms of housing. The Armenian mobilization forces deployed there torn down the doors, windows and tin and carted it away.

This happened during the war?

Yes. We have created a construction brigade based on the former Shushi reconstruction unit. We will start construction work in the coming days. The people want to return, but there is adequate housing. There are twenty residents, ten families in Lisagor today.

First, we provided bedding, a stove, etc. But we must start the repair from there because people want to return. Most of the population is concentrated in Stepanakert Some are in the Askeran, Martuni and Martakert regions.

Yes. In my opinion, in the future, by government decision, houses will be provided to former townspeople in Stepanakert. We have also proposed, as well as the president, that new districts and villages be built. Villages that are sparsely populated will build new districts or separate villages. For our region, it’s mainly the Karin Tak community, which was big. We had 751 inhabitants, 163 families.

Where do you see the resettlement of former Karin Tak residents?

In the land between the villages of Hovsepavan and Astghashen. Or between Noragyugh and Astghashen. We have chosen two precincts. Let's see where it succeeds. We will be able to allocate those lands through the state, because all of them are privatized or leased.

The land will probably be declared eminent domain. We need to provide 1,200 square meters of land to each family, so that they can have a 1,000-square-meter plot of land near their homes, be able to provide for themselves, and ship some of their agricultural products to the market.

Karin Tak, for example, was the supplier of most of the vegetables in the Stepanakert agricultural market. According to my calculations, about $3 million is needed to build New Karin Tak.

Let's come to the financial side of the problem. We visited Hovsepavan and talked to the builders of wooden homes. We got the impression that there are financial problems for the implementation of urban development programs in the whole territory of Artsakh. What’s your take?

You noticed correctly. In general, there are financial difficulties. There is a housing rental program. The government can’t pay the rent to landlords. Many landlords say the rent must be paid or the temporary tenants must leave.

The state must negotiate with the landlords to raise funds. In my opinion, there should be outside help to solve this issue. If the owners are not given those rents in February, they will naturally evict the tenants. The implementation of other humanitarian programs is also dependent on financial means.

Let me say one more thing. Foreign humanitarian aid is provided in a very irregular manner. Assistance should be organized in a centralized manner. Everyone, for example the Armenian Relief Society, says that since they brought the money here, they should have a say in how it’s distributed. This isn’t right.  should be provided in a centralized way.

Is it correct to say that the Shushi District Administration is in exile now?

Yes. As you can see, we are all crammed into two rooms. Some of the employees work in shifts. This is our general situation. We adapt to everything.

How can the hosuing problem be solved?

Regarding the housing program, I am in favor of financial support. A certain amount of money will be allocated to each displaced family, calculating the property and all that they lost.

Another fear is that they will take the money. They will go to Russia. They will run away. But this can be solved if you give it on the condition that no visas are granted for three years. It’s like in the Soviet years whenthe villagers were not given passports.

Is the main problem financial?

You can start a business with that money either in Armenia or in the villages of Artsakh. I am not saying build a two-story house. That's the quick fix.

If the housing problem is not solved in a short time, our emigration problem will be will very terrible. There’s another issue, that of urbanization. Everyone is in Stepanakert. People need to be moved to the villages.