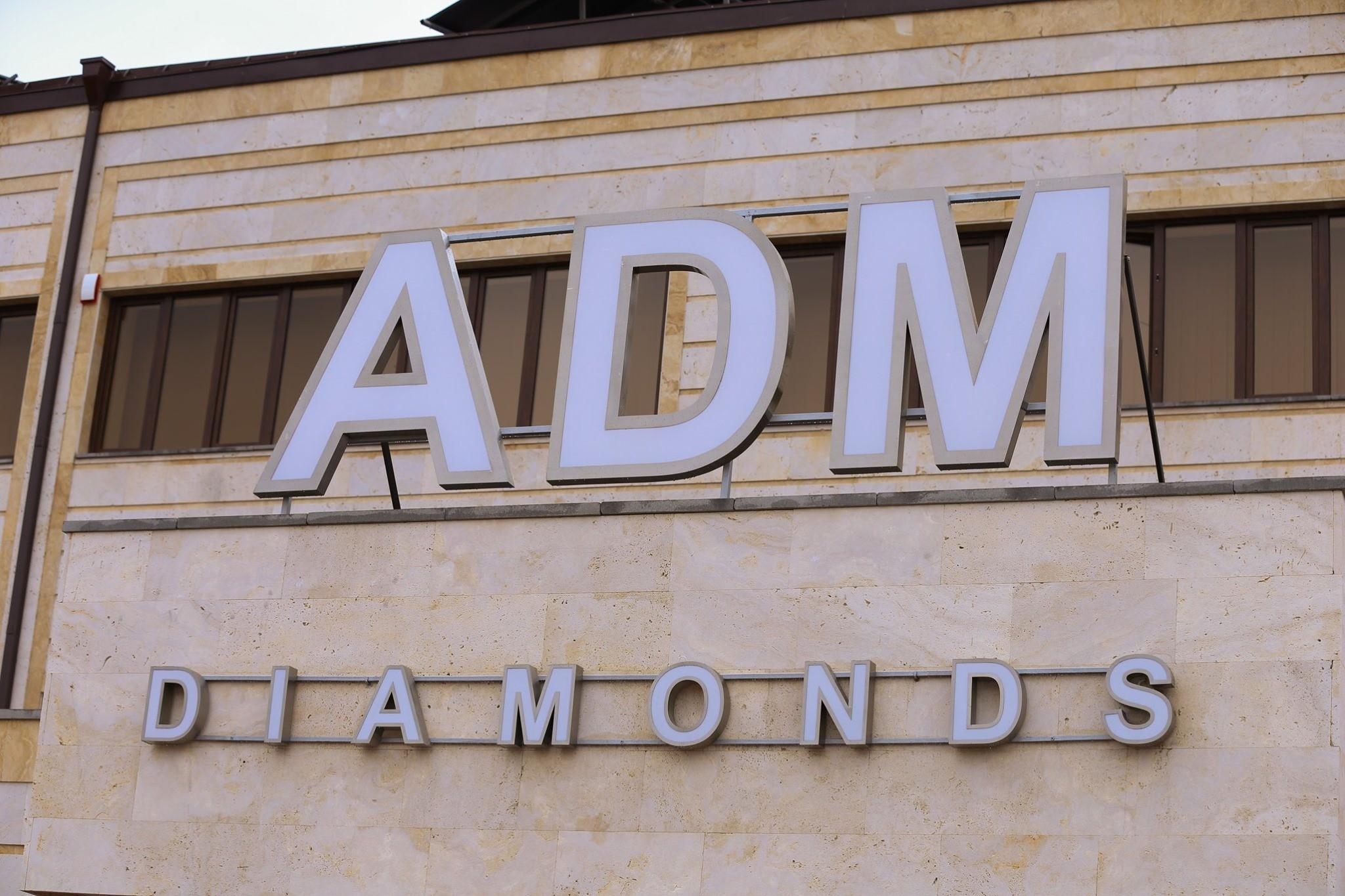 The diamond processing company affiliated with the ADM Diamonds factory imported diamonds to Armenia from the United Arab Emirates (UAE) in 2020 by falsifying their value and avoiding 17 million drams in customs fees. This isn’t the only interesting fact about the diamond trade between Armenia and the UAE; in 2019, the two countries reported significantly different data regarding the trade.

Armenia has large databases on foreign trade, and studies continue to reveal corruption risks and schemes.

Hetq Media Factory Corruption Reporting evening school students investigated a case concerning diamonds imported from the United Arab Emirates in which a false declaration was made and taxes evaded.

However, much more dubious data surfaced from the 2019 databases during the investigation of the diamond trade between Armenia and the UAE. And, generally speaking, there is no shortage of confusing data when it comes to the diamond trade and customs.

But, let’s take things one at a time.

On January 29, 2021, Armenia’s National Security Service (NSS) released news about an especially large case of tax evasion that was revealed when a diamond was imported. It was imported and declared as a diamond worth 72,014,112 drams, whereas its market value turned out to be greater than 420,000,000 drams. In other words, according to the NSS, the value of the diamond was falsified and declared as six times less than its actual value.

As a result, the state calculated the “especially large customs fees” as less and paid less. There was no mention of the amount of unpaid customs and, most importantly, the importing company.

In this case, the Head of the Department of Licensing and Permits of the Ministry of Economy Armen Nalbandyan was arrested for accepting large bribes. The preliminary investigation is underway, and no other details have been reported.

In order to understand more details about this case of customs fraud, we reached out to the relevant bodies: the Prosecutor’s Office, NSS, State Revenue Committee (SRC), and Ministry of Economy. However, all the agencies refused to provide information about the importing company.

It was possible to gain some information but only from the Prosecutor’s Office and the SRC. We used this as a basis for our further investigation on which company imported the diamond, when, and the amount of customs fees evaded.

Thus, according to the Prosecutor’s Office, on August 19, 2020 one company imported a diamond from the United Arab Emirates (UAE) to Armenia and declared it as having a customs value of 72,014,112 drams.

The Prosecutor’s Office stated that, while the preliminary investigation continues, the initial losses that were calculated were recovered.

However, the Prosecutor’s Office didn’t provide any data about the company, since the preliminary investigation in the criminal case has not yet been completed.

It is noteworthy that neither the NSS nor the Prosecutor’s Office defined this as a case of smuggling. Rather, what was carried out was a violation of customs rules, an offense.

The importer is a company affiliated with the ADM Diamonds factory

As per the State Revenue Committee, there are several companies that imported diamonds from the UAE to Armenia in August 2020 (the month when the import was made, according to the Prosecutor’s Office).

The most well-known of these companies is ADM Diamonds LLC, which is one of the biggest factories engaging in diamond processing in Armenia. It is located in the city of Abovyan, on a segment of the formerly industrial area that in Soviet times belonged to the huge Sirius factory.

Information circulated among business circles that the importing company in the case presented by the NSS was ADM Diamonds.

It took a long time for the company to comment on the case. After calls and written inquiries, company director Arsen Artashesyan replied that ADM Diamonds has nothing to do with the case.

Later, however, it was revealed that the importer was another company directly related to ADM Diamonds.

This was Karabra LLC. According to the State Register of Legal Entities, the company is fully owned by Karen Abrahamyan. His address in N. Shengavit is the same as the company’s registered address. The company was registered in February 2020.

Karen Abrahamyan owns another company: He is the sole owner of ADM Kalor Stones LLC founded in December 2019.

This company is located at the same address as ADM Diamonds.

The names match two other companies with the acronym ADM, the abbreviation for Armenian Diamonds Manufacturers.

We sent a written request to Karabra, asking that they deny or confirm their participation in this case and, in the event they did participate, whether they paid back the losses to the state.

Karen Abrahamyan did not deny the information in his written reply. He answered that Karabra LLC already paid 19 million drams. 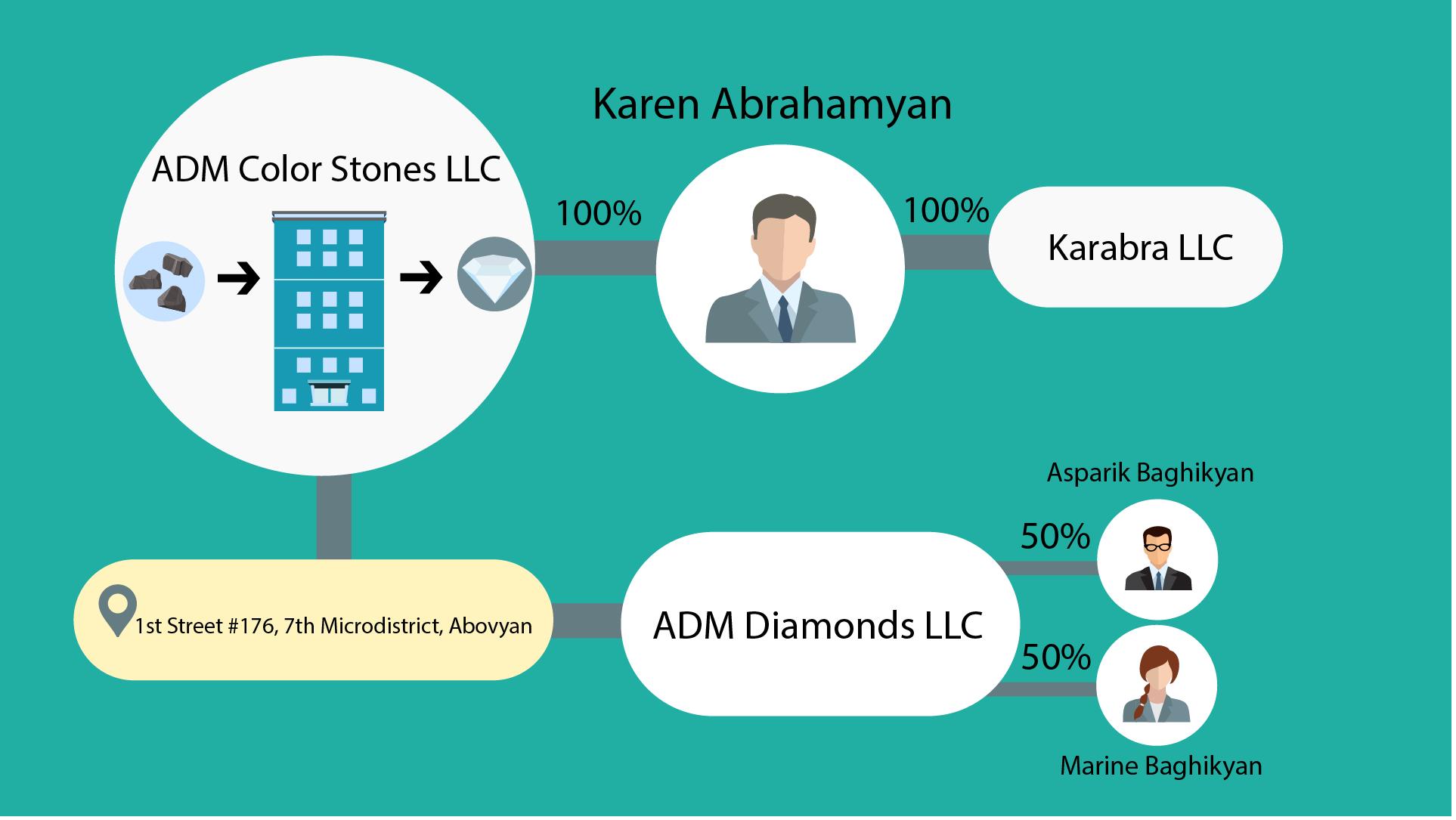 Given the connection between Karabra and its owner’s connection with ADM Diamonds, it can be assumed that the imported diamonds were for ADM Diamonds.

The Armenian press has linked ADM Diamonds with well-known businessman Khachatur Sukiasyan, though he denies the connection. In an interview with Hetq, his spokesperson Anna Mkrtchyan also denied the factory belongs to Sukiasyan.

According to the Registry, that link is not established. However, it is known that the registered owners of ADM Diamonds, the Baghikyans, are closely associated with Khachatur Sukiasyan. According to media interviews, Sukiasyan is well informed about the developments of the factory.

According to the Registry, the owner of ADM Diamonds LLC is registered at the same address as Asparik Baghikyan and Marine Baghikyan. The Baghikyan’s son, Artak Baghikan, was introduced as the factory’s founder and director during the factory launch and in interviews with the media. 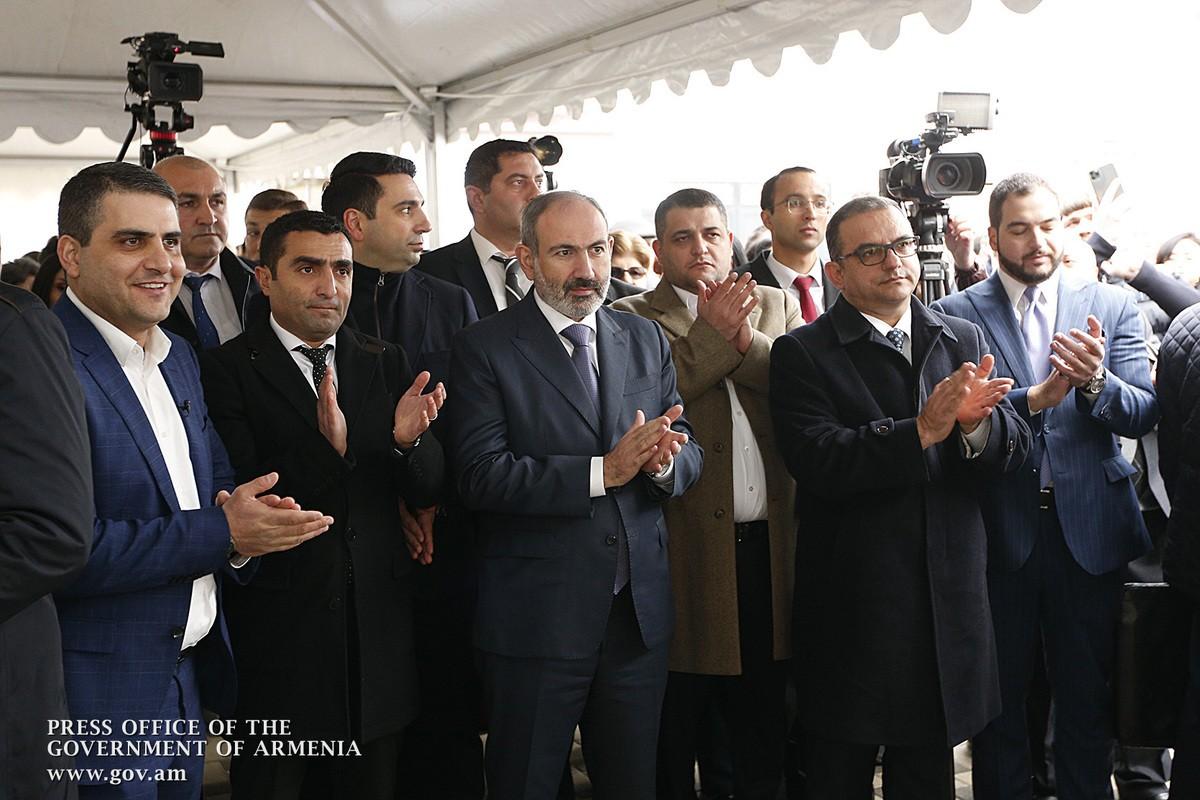 Articles in the Armenian media covering corrupt transactions often refer to ADM Diamonds LLC. Artak Baghikyan stated in an interview with journalists on May 26, 2020 that the company is not involved in any corrupt or criminal schemes and that they carry out all operations within the law.

Customs mess: the SRC backs off

Diamonds are always at the top of the list of Armenia’s imports.They are imported for jewelry making, most of which are exported after processing. They are also used as technical diamonds. While the value of diamonds imported from different countries is highly variable depending on their quality, they are imported and exported using the same customs code (7102), though they are also classified according to subcodes.

According to the Customs Service, Armenia imported around 715,500 carats of diamonds with a customs value of US$92.2 million in 2020. Compared to 2019, the volume of imports grew by 7 carats, or 1%. Meanwhile, the value decreased by $57 million, or 38%, due to the fact that the value of diamonds imported in 2020 was lower on average than the previous year.

In general, the export and import geography of diamonds changes year to year. However, there are countries from which Armenia regularly imports: Russia, Belgium, the UAE, and others.

In 2020, Armenia imported diamonds on a larger scale from Hong Kong (393,000 carats), India (136,000 carats), and Russia (92,000 carats). When we look at imports according to their value, the top countries are again Hong Kong and India (see the infographic below). Belgium and the UAE are also in the top five.

However, the situation is different with regards to Russia. Russia imports much cheaper diamonds to Armenia, including technical diamonds. Therefore, its total value is much less.

Higher value diamonds were exported to Russia and Belgium.

Since the case we were investigating is linked to the UAE, we tried to find more comprehensive data on the diamond trade between Armenia and the UAE. Significant differences in the number of imported diamonds from the UAE to Armenia in 2019 were found when comparing them with the numbers found on the UN International Trade Statistics Database.

According to data provided by Armenia that was on the UN International Trade Statistics Database, around 131,000 carats in diamonds were imported from the UAE to Armenia in 2019, at a total value of $16.9 million. The same numbers are published on the Armenian Customs Service website.

However, according to data provided by the UAE to the UN, more than 525,000 carats in diamonds were exported from the UAE to Armenia in 2019, at a value of $64.1 million.

In other words, the numbers provided by the two countries for the same database regarding diamonds imported from the Emirates to Armenia in 2019 are extremely different.

We tried to understand what caused these differences in numbers by asking the State Revenue Committee of Armenia. In response to our inquiry, the agency simply advised us to pay attention to the methodology used to calculate the numbers when making comparisons to ensure that it was the same.

For example, numbers may differ according to the origin of the product or data calculated by the country doing the trading.

However, the data we mentioned is taken from the same database, which implies

that it should be calculated using the same methodology. In any case, even if the data is not suspicious, the SRC should have provided verified information, since there is a limited amount of clarification one can get from open sources. The SRC, however, backed off.

Methodology is an objective factor. The statistical value of imported products from partner countries is determined by Cost, Insurance, and Freight (CIF) prices, whereas the value of exported products is determined by Free On Board (FOB) prices. Unlike FOB, CIF prices also include transportation costs and insurance payments that are needed to transfer a given item. That is also the reason that the same product cannot have an identical import and export value for two comparable countries.

The intentional distortion of statistics is a subjective factor. Importers can declare products using fake product codes as well as deliberately reduce the value of the imported product in order to minimize customs fees.

Let's hope that, after our publication, the Armenian Customs Service will clarify which factor played a role in the example we provided.

In general, news often circulates about corruption suspicions and deals having to do with Armenia’s foreign trade in the diamond market. Some is proven, some denied, and some remain in the air.