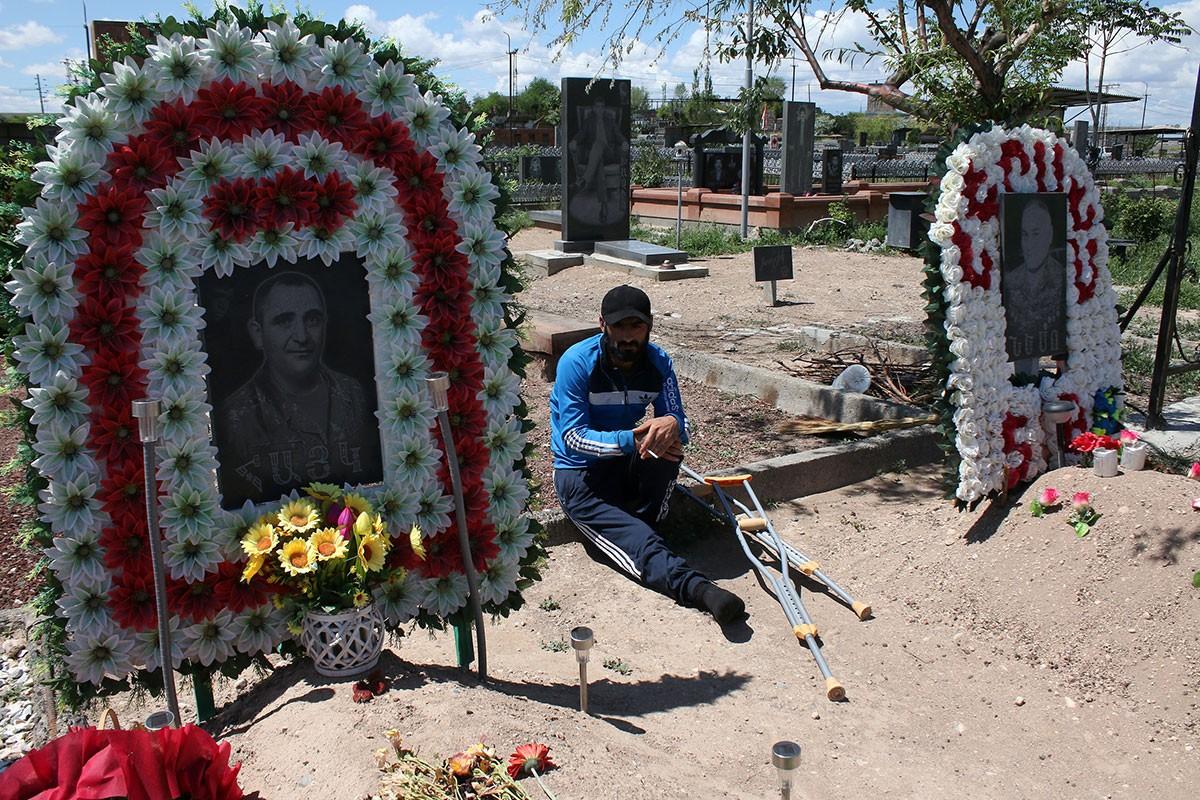 Artsakh Platoon’s “Lucky Charm”: Yazidi Volunteer Edgar Ozmanyan Says He Should Have Died with the Others

32-year-old Edgar Ozmanyan lies on the bed of his father's house, his injured leg outstretched, holding a cigarette in one hand, and straightening out his injured leg with the other.

Edgar fought and was severely injured in last year’s Karabakh war. What he saw, the pain and suffering, turned him into a chain-smoker.

He’s one of Armenia’s 40,000 or so Yazidi national minority. Edgar, his wife and five children, live in Daralik, a village in the country’s Armavir Province. 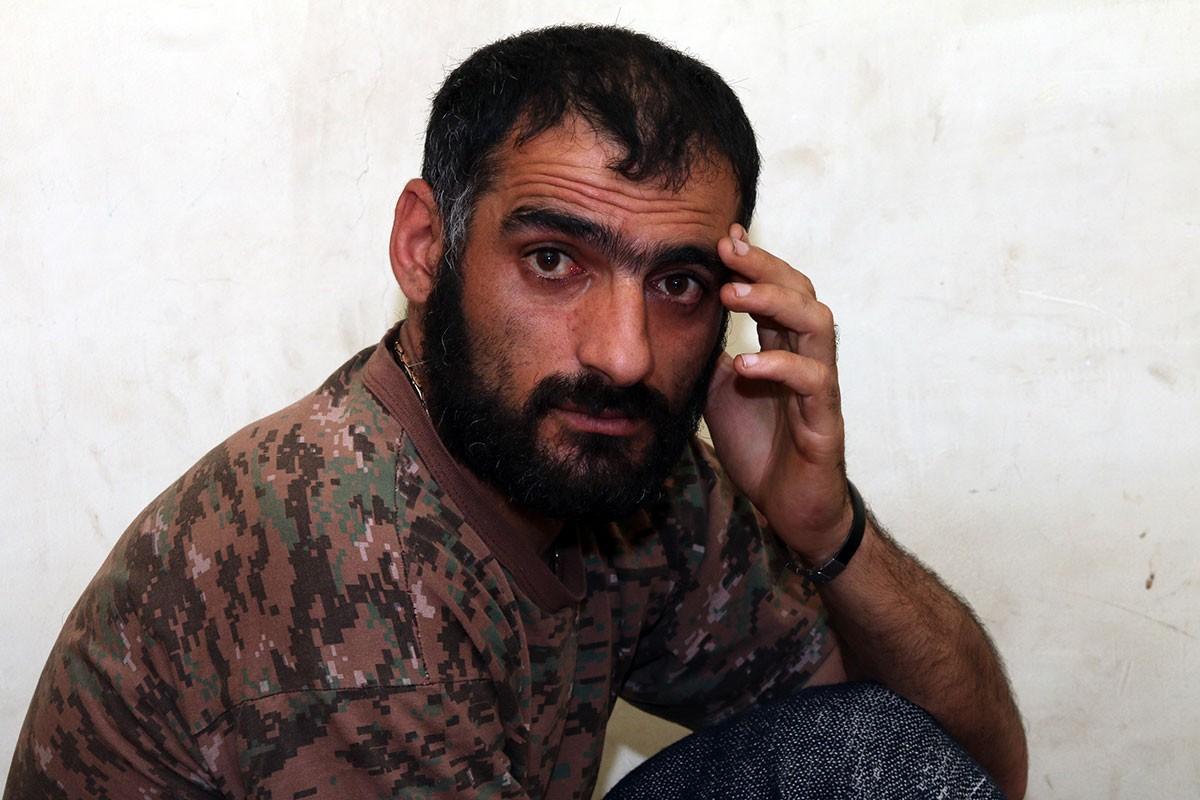 When the war broke out on September 27, 2020, Edgar attempted to sign up as a volunteer. The village mayor and the nearby recruiting center both refused to take him after finding out he was raising five children.

“I should have kept my mouth shut,” Edgar says.

The following day, a friend told him about a recruitment drive in Myasnikyan, a nearby village. Edgar says early next morning he took his cows to a neighbor, grabbed some clothes, kissed his mother and family goodbye, and headed off.

Edgar, according to Yazidi tradition, married early, at fifteen. By eighteen, the time of compulsory military service, he already had two children. He could have received a deferment but chose not to.

He served as a senior scout-sniper in Mataghis, a village along Artsakh’s northeastern border with Azerbaijan. He was awarded medals for marksmanship.

Edgar lights another cigarette and says he’s always been interested in military life. When he attended school, he would take some rabbit meat, bread and cheese from home and take them to a nearby military base. "We would sit and talk and shoot,” he recalls smiling. 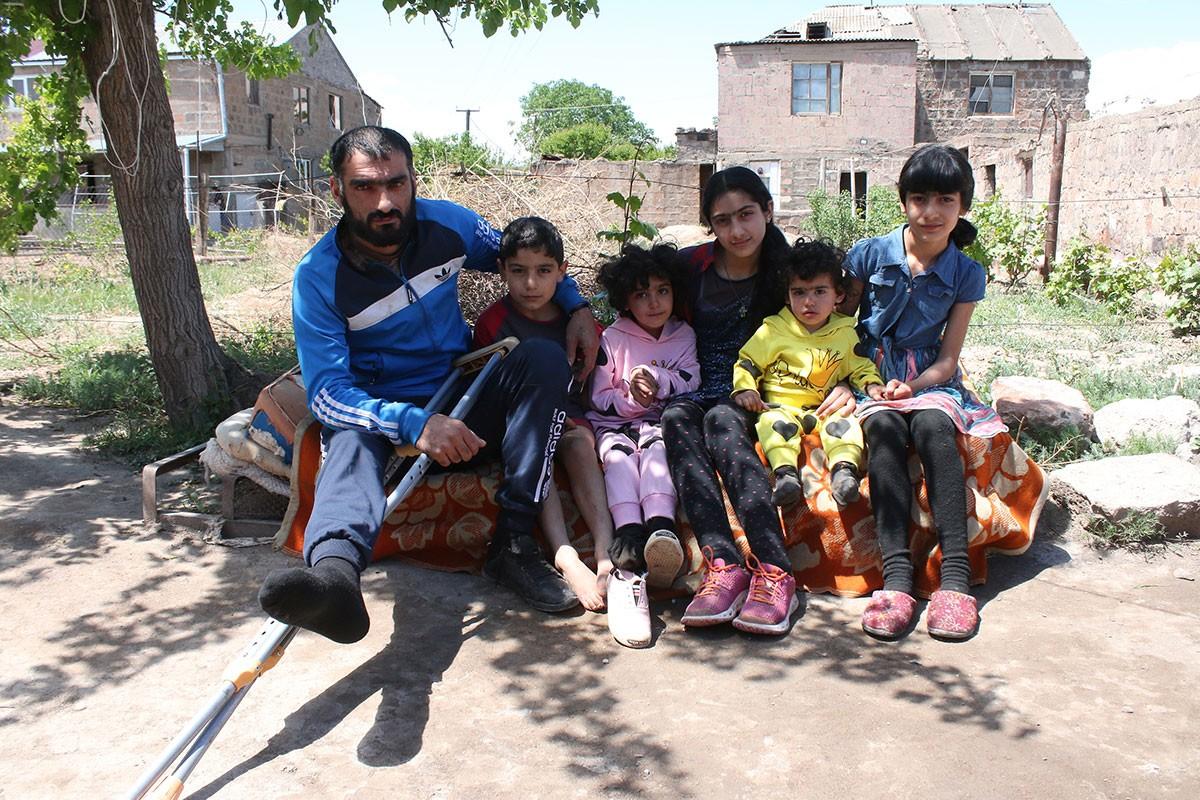 After his discharge, Edgar raised cattle for a while before leaving to work in Russia. He says they did all types of construction work there. He didn’t go in 2019, deciding to stay home and help the family raise livestock for a fellow villager.

Soon after volunteering, Edgar and the others were supplied arms and sent to Artsakh.

Edgar, without pausing, recounts what he saw and experienced. His face occasionally sports a bitter grin.

Even though he’s an experience sniper, Edgar was issued a machine gun. There were no sniper rifles to be had at Kanakeravan, the Kotayk village in Armenia where the volunteers were supplied before heading off to Karabakh.

Soon after reaching Artsakh, Edgar’s platoon was dispatched to Maghavuz, in the Martakert region.

He says they held the position, near the cemetery, for five days. They did not see the enemy, only the shells flying over them.

Upon returning to the post, where the famous Yeghnikner (The Deers) base was stationed, news was received of an intense battle taking place near Mt. Aregasar.

Orders came down to reach the battle site and hold the line. Edgar, despite a fever, grabbed some food and cigarettes and joined the other Armenian volunteers heading to Mt. Aregasar.

“We went at night. On the first day we settled down, not knowing where the Turks were. It was dark," says Edgar, adding that they blew up a bridge to prevent the enemy from entering the Yeghnikner base.

October 13, 2020 proved to be a fateful day for Edgar 13th. Armenian forces had just captured a frontline position.

"My commander came and said, 'You haven't slept all night’”. He had spread a tarp out for us to sleep. It was 4 o'clock. My friends came, we were talking in the trench. All I remember was a cloud of dust," Edgar recalls, finding it harder to speak.

Edgar says it was either a drone bomb or a mortar. He thought the Azerbaijanis were attacking. Wounded in the leg, he couldn’t carry the 12-kilogram machine gun, so he grabbed an assault rifle.

"I said that no matter what I kill, I will at least help my friends' corpses not being damaged," says Edgar. 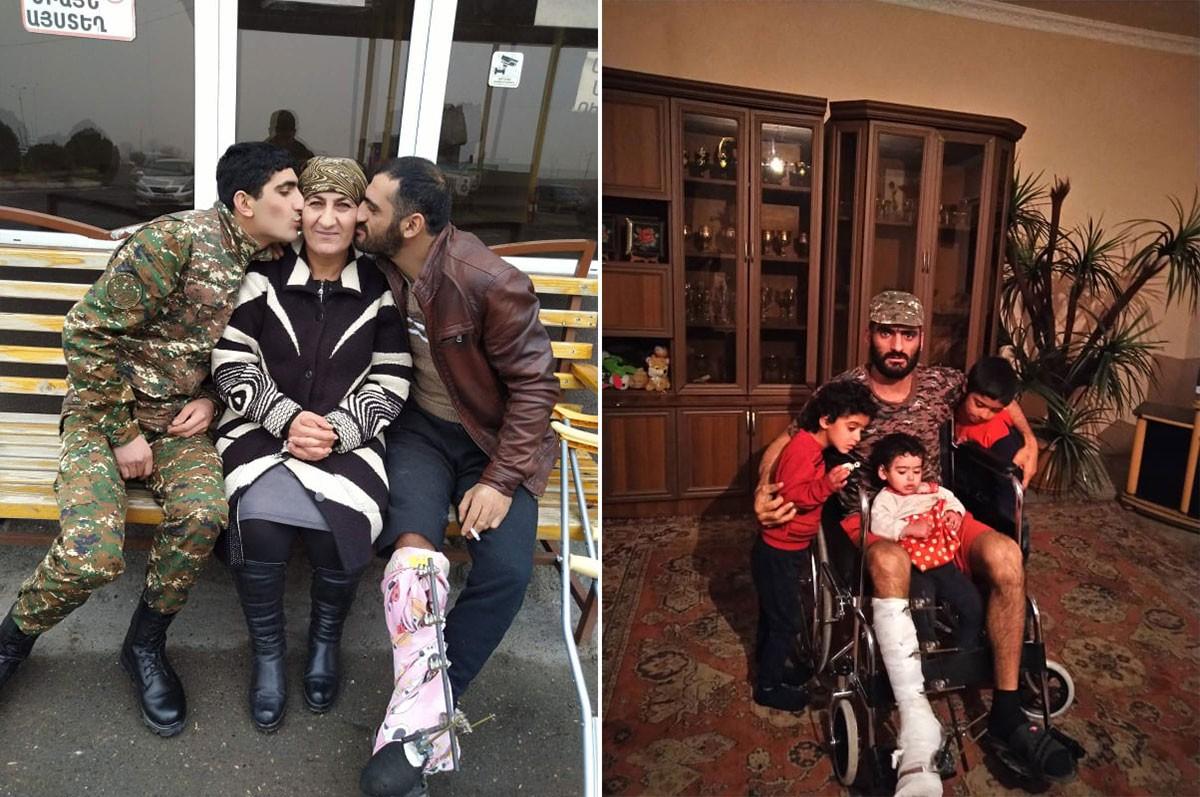 “My eyes were closing, and my ears were ringing, I had a concussion. I called for help. Our guys from the post saw the dust and smoke. They took me to a safe zone, put placed wooden boards on my feet, wrapping them with rubber. When I asked what had happened, they said no one had died and that I alone had been wounded.

Edgar and Commander Nerses Nersisyan were taken by ambulance to Martakert, but the commander died on the way. Edgar was taken to the Stepanakert hospital.

He says that the ambulance was constantly targeted on the way but wasn’t hit.

"My condition was serious. They operated on my leg. It was a terrible day, they hit the hospital," says the 32-year-old volunteer.

"My commander kept telling me, 'Edgar, you are our good luck charm.' I asked why. He said because I was the only Yezidi among us. ‘We will die soon; you will stay alive’. And that’s what happened. "When I was in the hospital, I thought it would be better for me to die with them rather than carry so much memory and pain."

On October 14, Edgar was taken to the Armenia Medical Center in Yerevan. When he woke up in the morning, he saw his parents sitting next to him. After undergoing chemotherapy at the Oncology Institute, Ms. Gyulnaz went to see her son. There was not even the slightest of smiles on the woman’s face during our whole conversation.

During the 44-day war, Mrs. Gyulnaz's youngest son, Garik, was a conscript with the Yeghnikner base. They had not heard from him for more than a month. He was discharged this January.

"Edgar, why you were in such a hurry to go to the front?" I ask him.

He smiles softly. Ms. Gyulnaz says that when Edgar left, he said, "Mom, I'm going to catch up with Garik." His mother asked him not to go and says she even got down on her knees, but Edgar was adamant.

After going to Yeghnikner, Edgar was able to see his brother for half an hour.

"It was a terrible situation. I saw the guys sleeping in the mud. I told my commander, that I’ll fight in my brother’s place, let him go to the second line,” says Edgar.

He never got the chance because the order to defend the Mt. Aregasar position had come.

Garik used to send photos to his mother via different phones, and her suspicions deepened that her son might have been captured and the enemy were sending the photos. On November 2, when Mrs. Gyulnaz was riding in a minibus, Garik called. She fainted upon hearing her son’s voice.

Edgar says he still does not know how much money he will receive for his war disability. His medical treatment continues. Carefully removing the sock from the injured leg reveals that it’s been shortened by seven centimeters.

"The doctor said I can't stand on my heel. I said if that’s the case let them cut it off and put on a prosthesis," says Edgar.

His mother says there are still fragments in the leg.

"He comes and goes to Yerevan. He is under treatment. He owes 260,000 drams to a taxi driver,” says Ms. Gyulnaz. Edgar adds that he had to pay 11,000 drams for the crutches he uses. He stresses the amount, making it clear that it’s a substantial sum of money for him.

At the end of our conversation, Edgar asks to be taken to the Myasnikyan village cemetery, where his comrades-in-arms are buried. He goes there several times a week. His son Alikhan is coming with us. 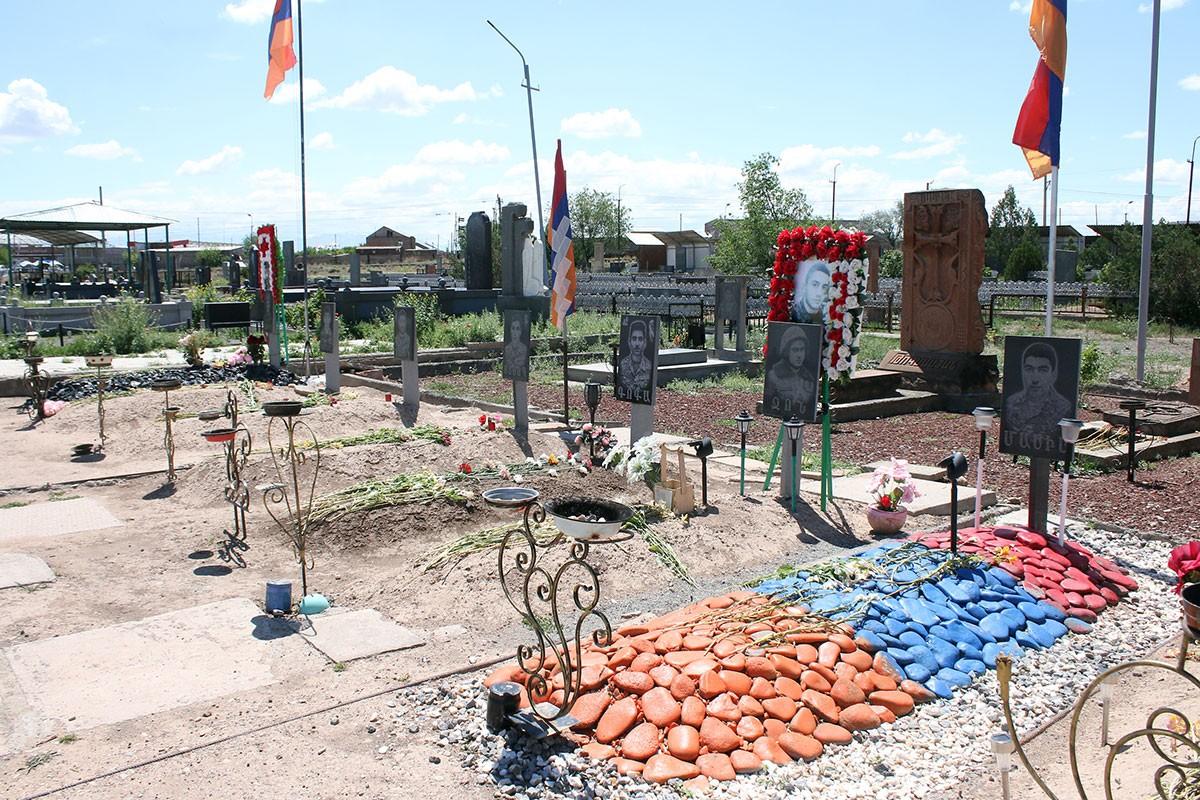 Upon arriving, Edgar kisses his friends' graves one by one, then goes back and forth to kiss and clean the gravestones by hand. He then sits by the gravestones, placing his crutches by his side. He lights another cigarette. We do not speak. Alikhan walks around the cemetery.

“I was a boy full of jokes and good humor, but now I cannot smile. When I smile, it’s not for real. We promised to leave Myasnikyan and would come back together," he recalled.

Edgar asks why he survived and how will he bear the burden of these painful memories.

Silence surrounds us, occasionally broken by the sound of a passing car.