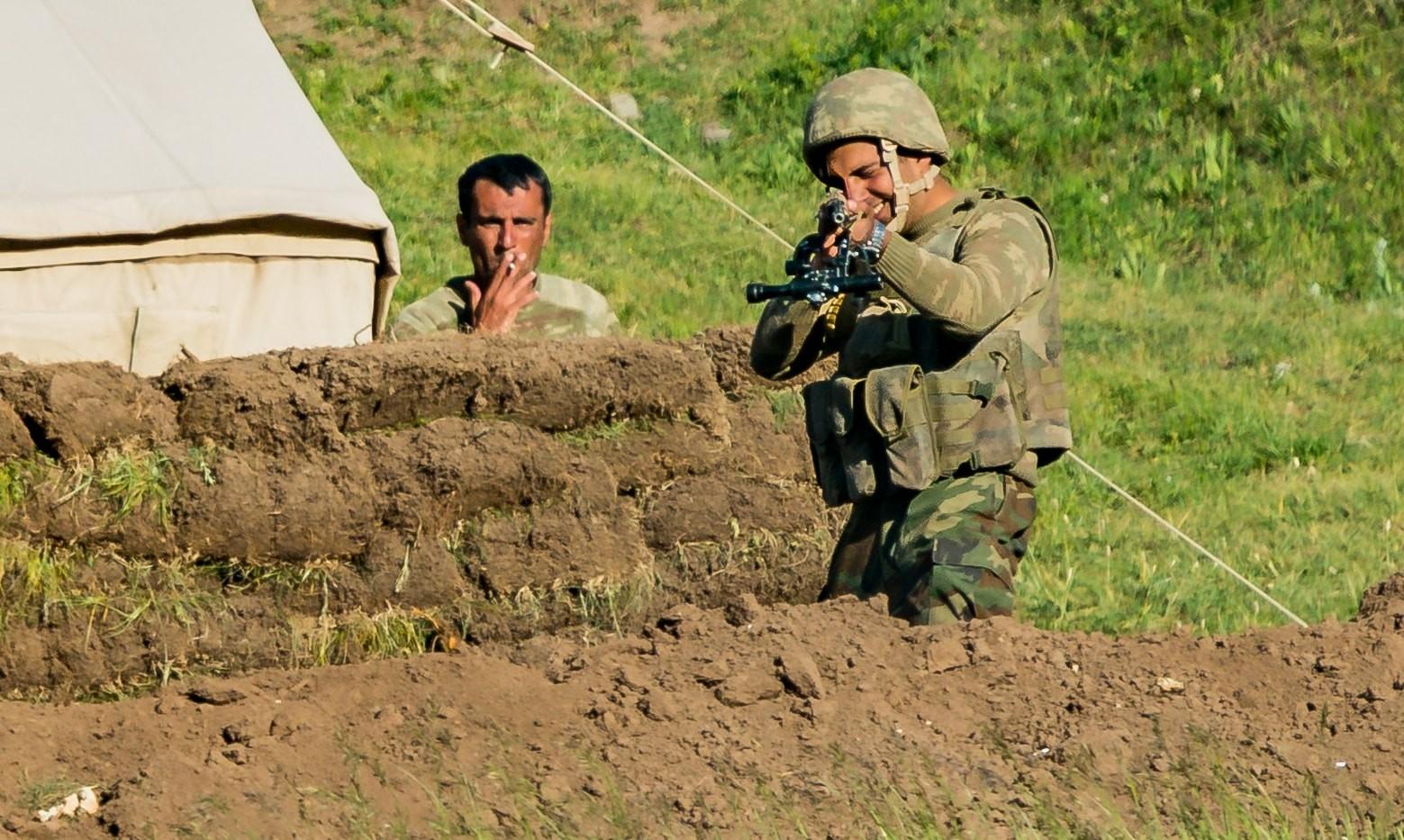 A Spanish journalist, whose identity will remain anonymous for security reasons, recounted to Hetq how an Azerbaijani soldier trained his loaded gun on him when he visited the Armenia-Azerbaijan border earlier this month to cover the story for the U.S. media.

He and another journalist left for Armenia’s Gegharkunik province on June 15 to film the advance of Azerbaijan soldiers into Armenia. 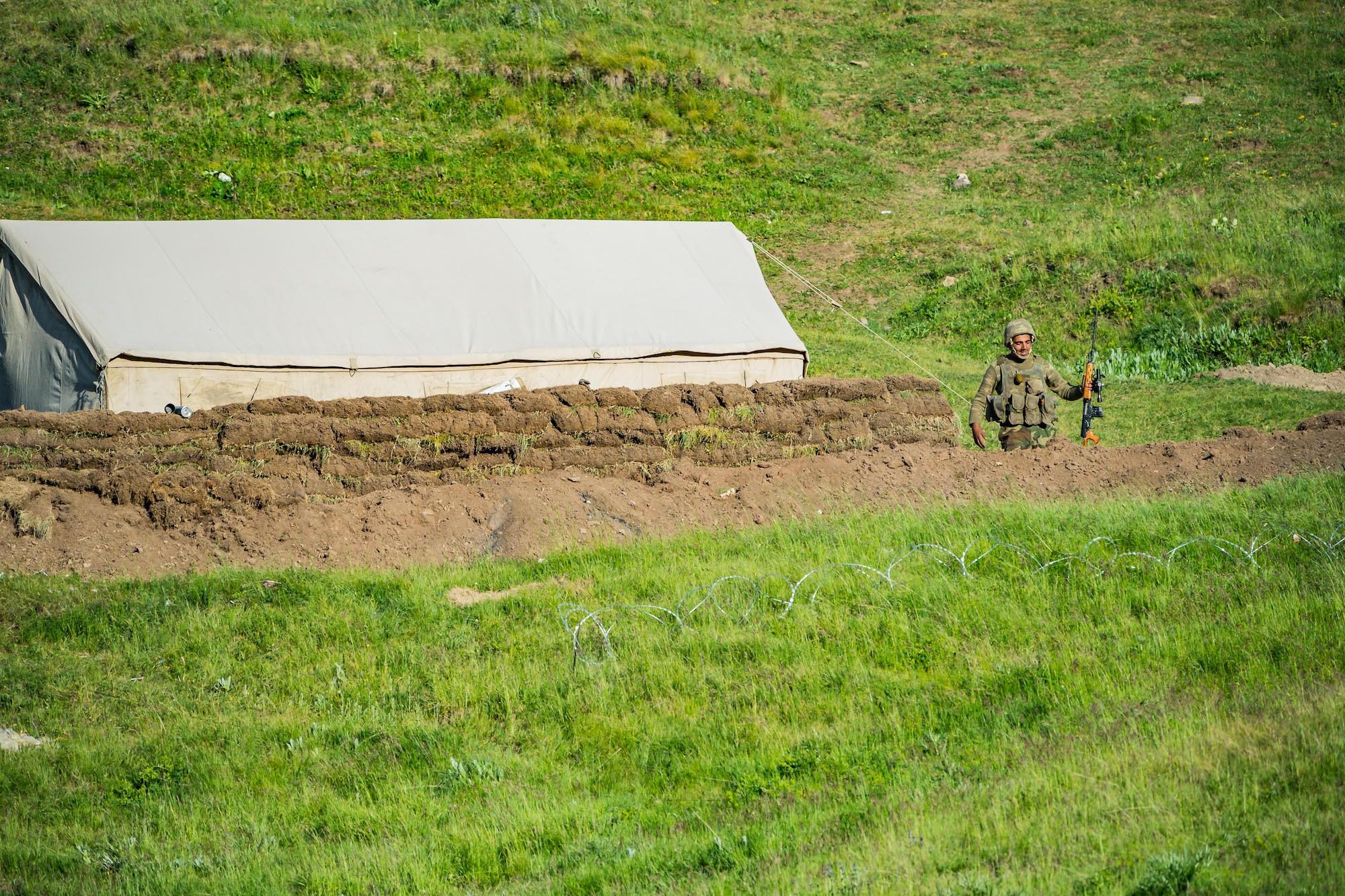 "My colleagues told me that the Armenian Ministry of Defense does not allow foreign journalists to film on the Armenian-Azerbaijani border. They reject everyone. But I thought that as a photojournalist, knowing the reality, I should go to the border and take photos. I considered it my duty," says the photojournalist.

The two journalists, accompanied by several Armenian servicemen, toured the areas a few kilometers south of the Sotk gold mine, filming the positions of the Azerbaijani servicemen in the territory of Armenia. They were in civilian clothes, but they had big cameras in their hands, it was obvious that they were representatives of the press.

The photo below shows where the incident took place. 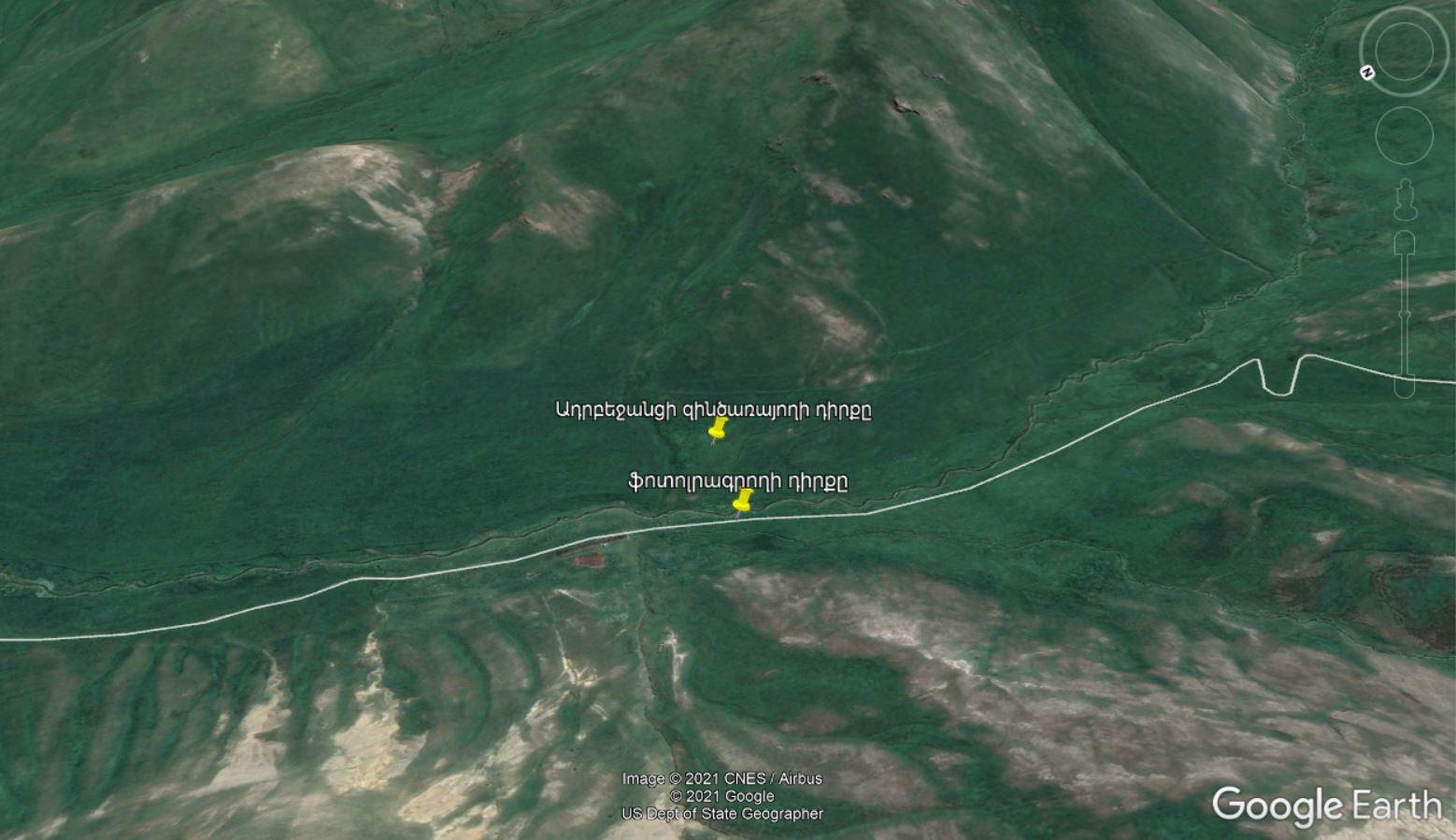 The photo of the smiling Azerbaijani soldier aiming a gun on the journalist has already spread on the Internet. The Paris-based Reporters Without Borders organization and the office of the Human Rights Defender of Armenia, issued a statement on the matter.

#Armenia: A team of Spanish journalists were threatened with death by #AzerbaijaniForces while reporting on their position, close to the border with #Azerbaijan in the Gegharkunik province. @RSF_inter condemns this unacceptable act toward journalists ! pic.twitter.com/bH1BJNh2Y7

The photojournalist says the Azerbaijani positions are mainly elevated, on the top of a mountain or hill. There are one or two military tents at each position that includes 5-6 servicemen. Trenches are dug around the tents and some are outfitted with machine guns.

Reports says that Azerbaijan is carrying out active road construction works on the border, inside the territory of Armenia. According to the journalist, the Armenian servicemen are not taking countermeasures since they’ve been instructed not to intervene and not aggravate the situation. 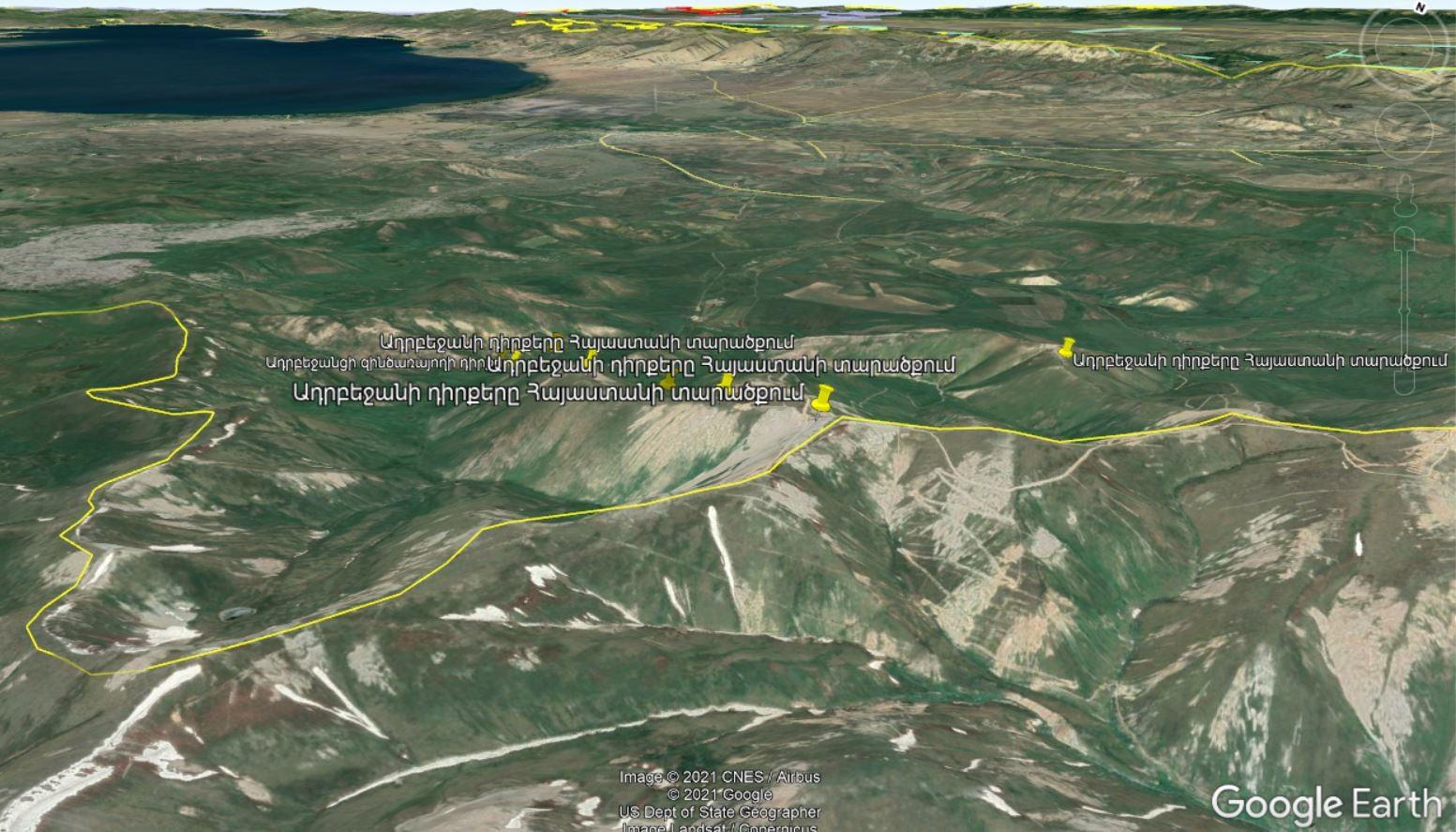 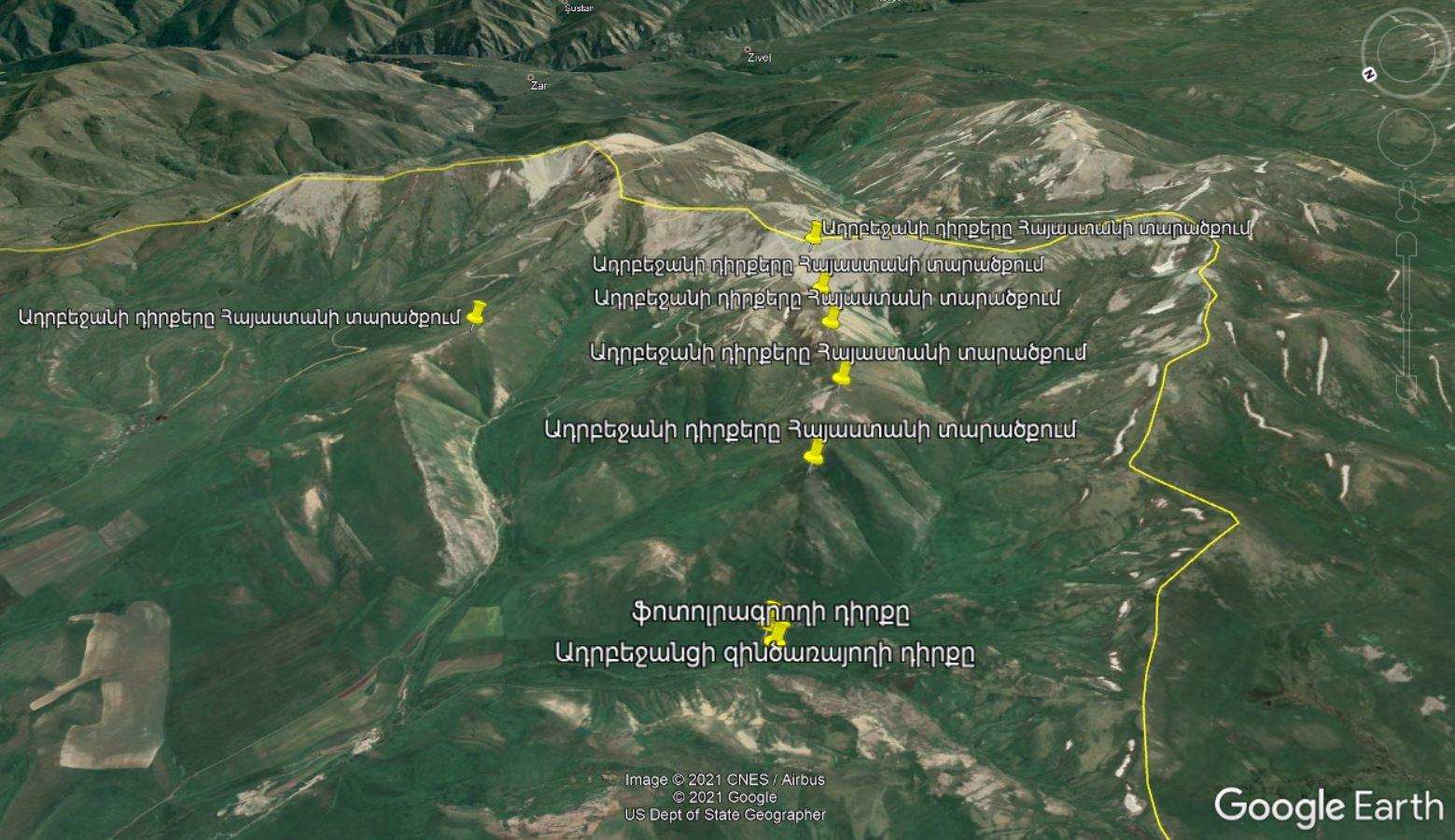 "I do not regret that I went to Gegharkunik without the official permission of the Armenian Ministry of Defense, I photographed the Azerbaijani servicemen, their positions because the Ministry of Defense either does not respond or rejects the application after 20 days," says the journalist.

The experienced journalist, who covered the four-day war in Artsakh in 2016, the 44-day war in 2020, and other hot spots of the world, says that he is not allowed to go to Artsakh anymore.

"As a journalist, I applied to enter Artsakh on June 11 to cover the story, but the Russian peacekeepers rejected my application without any explanation. My other international journalist colleagues also received rejections. They sent all of us the same rejection text," says the journalist.

The journalist says Russia does not want international journalists to cover events taking place in Artsakh, the problems faced by residents.

The journalist regrets that he cannot go to Artsakh anymore, because during the 44-day war he made many acquaintances and friends in Artsakh.

Hetq publishes the photos with the permission of the author.

Edgar 2021-07-09 18:47:07
Another proof of Azerbaijan's aggression. As I know all journalists are wearing vests in which written "press" and on journalists soldier cannot shoot. Every day we can meet a lot of azerbaijan's aggression cases like this, and I think that the other countries should speak about these aggressions and stop them.
Karen Akhsharumov 2021-07-04 22:10:56
I talked about this issue in the past, that if Spanish Journalists are being thretaned besides of Armenia’s guiltiness on the border, it’s also huge issue for Europe Union that they let Azerbaijan to be so restrained, all the world should punish this non-human actions, so Azerbaijan and Turkey will finally understand that they can’t and will not own the world by humiliating peaceful people on the border (in this case journalists’ who are just doing there job and duty.