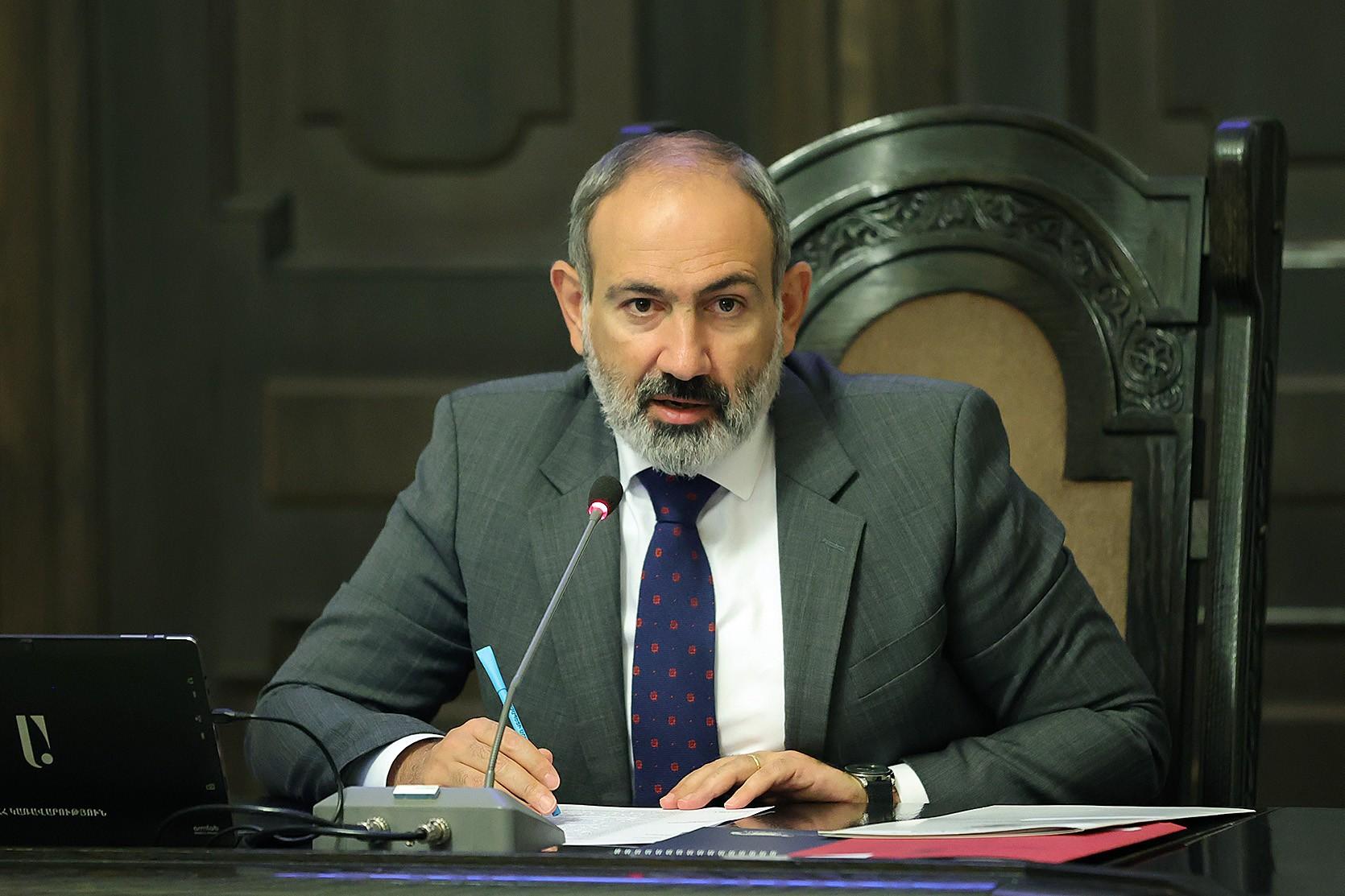 "Armenia will defend its sovereignty and territorial integrity", Says Pashinyan

Acting Armenian PM Nikol Pashinyan addressed a government cabinet session today, stressing that Azerbaijan must remove it troops from Armenia before any border demarcation process can take place. Pashinyan reiterated that Armenia will continue to uphold the right of the people of Artsakh to self-determination and that a settlement to the Karabakh conflict must proceed under the auspices of the OSCE Minsk Group.

The following unedited translated transcript of the prime minister’s remarks was provided by Pashinyan’s office.

Dear colleagues, the Civil Contract Party received a mandate in the 2021 snap parliamentary elections to open an era of peaceful development for Armenia and Artsakh.

The mandate was given by the citizens of the Republic of Armenia. The mandate implies engineering a favorable environment around our country, opening of regional communications, achieving regional stability and lasting peace. However, as we predicted by saying that there was a high probability that despite its peace-loving statements made for international audiences, after the snap parliamentary elections in Armenia Azerbaijan would do everything to impede the reinstatement of regional peace with an attempted tactic of showing that Armenia or Artsakh are supposedly against the peace process, against demarcation and delimitation.

Azerbaijan is trying to create ill-grounded justifications for its aggressive policy, the manifestations of which we have seen in recent days and in recent months. In particular, the working group featuring the deputy prime ministers of Russia, Armenia and Azerbaijan is making constructive and effective efforts to unblock regional communications, while Azerbaijan’s incomprehensible statements about the so-called Zangezur Corridor have nothing to do with the working group’s goals, with the January 11 trilateral statement of Moscow, which specifies the way Clause 9 of the trilateral statement of November 9 should be implemented.

My comment is unequivocal: Azerbaijan is making statements about the “corridor” to disrupt the working group’s proceedings and prevent the opening of regional communications. Why, because Azerbaijan seeks to continue the 30-year-long blockade of Armenia, but we will continue to work in the trilateral working group to break the blockade of Armenia with the support of our Russian and international partners, we will do everything to open regional communications, that is, we will get Armenia out of a protracted blockade.

Next, Azerbaijan is trying to make believe that Armenia is against demarcation and delimitation activities. The reality is just the opposite: Azerbaijan itself is opposing demarcation and delimitation, because it has brought up obviously false maps trying to justify the presence of its troops in Armenia’s sovereign territory, in particular, in some parts of the Sotk-Khoznavar section of the Armenian-Azerbaijani border.

Both the international community and Armenia have clearly expressed their position on this issue, calling for Azerbaijan’s pullout from these territories; mirror withdrawal of both Armenian and Azerbaijani troops from the border to their initial positions; deployment of Russian border guards and/or international observers on the border; preparation and start of demarcation and delimitation works under international auspices. This is our proposal, and we are working with our partners, in particular our Russian colleagues, but Azerbaijan has failed to respond in any way to our statement and proposal.

Azerbaijan is trying to create the impression that Armenia is against peace and against signing a peace treaty. Meanwhile, on several occasions Armenia publicly welcomed the statement issued by the OSCE Minsk Group Co-Chairs on April 13, which states: Quote: “Having in mind the terms of their OSCE mandate and the aspirations of all the people of the region for a stable, peaceful, and prosperous future, the Co-Chairs stress that special attention should be paid to the achievement of a final comprehensive and sustainable settlement on the basis of the elements and principles well-known to the sides.

In this respect, the Co-Chairs call on the parties to resume high-level political dialogue under the auspices of the Co-Chairs at the earliest opportunity. They reiterate their proposal to organize direct bilateral consultations under their auspices, for the sides to review and agree jointly upon a structured agenda, reflecting their priorities, without preconditions.”

Let me remind that the three “the elements and principles well-known to the sides” as specified in the aforementioned statement, which underlie the settlement of the conflict, are as follows: people’s right to self-determination, ruling out the use of force or the threat of force and territorial integrity.

Therefore, this statement is nothing more than a proposal for a roadmap to reinstate peace in the region. Armenia welcomed the statement and responded favorably to its provisions, and now I wish to officially declare once again that Armenia is prepared to resume the settlement process in the format and content specified in the Co-Chairs’ statement. I think that instead of destructive actions and statements, Azerbaijan’s leadership should have complied with the calls voiced by the mediators. Azerbaijan should express a clear-cut position on the statement of the Co-Chairs. We will unequivocally uphold the right of the people of Artsakh to self-determination.

Dear colleagues, given Azerbaijan’s provocative statements threatening Armenia’s territorial integrity, it becomes obvious which of the sides is hindering the establishment of regional stability and peace. By carefully considering Azerbaijan’s actions and statements, we can see that it has territorial claims to most of its neighbors, and this is the main factor that questions their aspiration to regional stability and peace. Despite everything, Armenia will defend its sovereignty and territorial integrity through all possible and impossible means, including the launch of the mechanisms available to the Armenian-Russian united group of forces and the Collective Security Treaty Organization. We continue consultations with our partners on this issue.