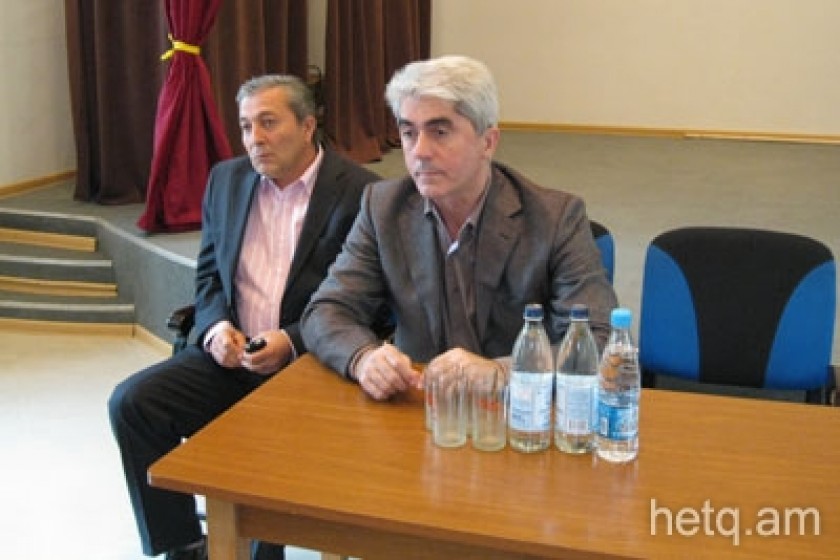 Vallex Group ChairmanValery Mezhlumyan, in an attempt to calm passions in the village of Teghout over a recent incident in which company security guards beat several village residents, travelled to Teghout and asked for forgiveness.

Teghout residents claim that on April 16, members of Teghout Ltd., a subsidiary of Vallex, roughed up and beat several residents for raising a cloud of dust when driving by the men.

“As the main shareholder in Teghout Ltd. and its chief executive, I ask for forgiveness in front of Teghout residents over what happened. A group of Teghout employees got into a fight with a group of other employees, and this caused us great shame. We must resolve this problem quickly and move on,” Mezhlumyan told the gathered crowd.

He said that those involved had already been sacked.

Mezhlumyan said that the security staff had been on edge due to theft occurring at the plant site and that their passions got the better of them.

The company head attempted to put a positive spin on things by telling the crowd that a new hotel in Teghout would be up and running by the fall, followed by a restaurant and a swimming pool. He also mentioned the building of a factory in a few years where Armenian ornaments would be produced from turquoise. These projects would afford new jobs for local people, Mezhlumyan claimed.

He told villagers that salaries at the mine would increase after the factory started up and proposed that the company assist residents engaged in animal husbandry, given that the company would need agricultural foodstuffs.

At the end of the meeting Teghout Mayor Haroutyun Meliksetyan told Hetq that in order to calm passions in the village, the issue of the employees who beat residents must be duly resolved.

“Right now, they have been temporarily suspended since they can’t be dismissed without adequate proof. Such a move wouldn’t be legal,” Meliksetyan said.

Vallex Group press secretary Vahram Avagyan said the issue of the employees involved in the fight would be handled according to Armenia’s Labor Code.