Former Armenian residents of Hadrut, Karvatchar and Shushi, areas in Artsakh now occupied by Azerbaijan, demonstrated outside the Government Building in Yerevan, demanding that the government provide them with housing or land to build on.

Svetlana Abrahamyan moved to Karvatchar with her family from Yerevan in 2004. Abrahamyan taught Russian in the Brajur village school in Artsakh’s Shahumyan District. Last year’s war forced them to move back to Armenia, and they now rent an apartment in Yerevan.

“We never thought this is how we’d end up. We decided that we’d always live there. So what if we weren’t Karvatchar natives? We got accustomed to the place and tied our life and future plans to that place,” she told Hetq. 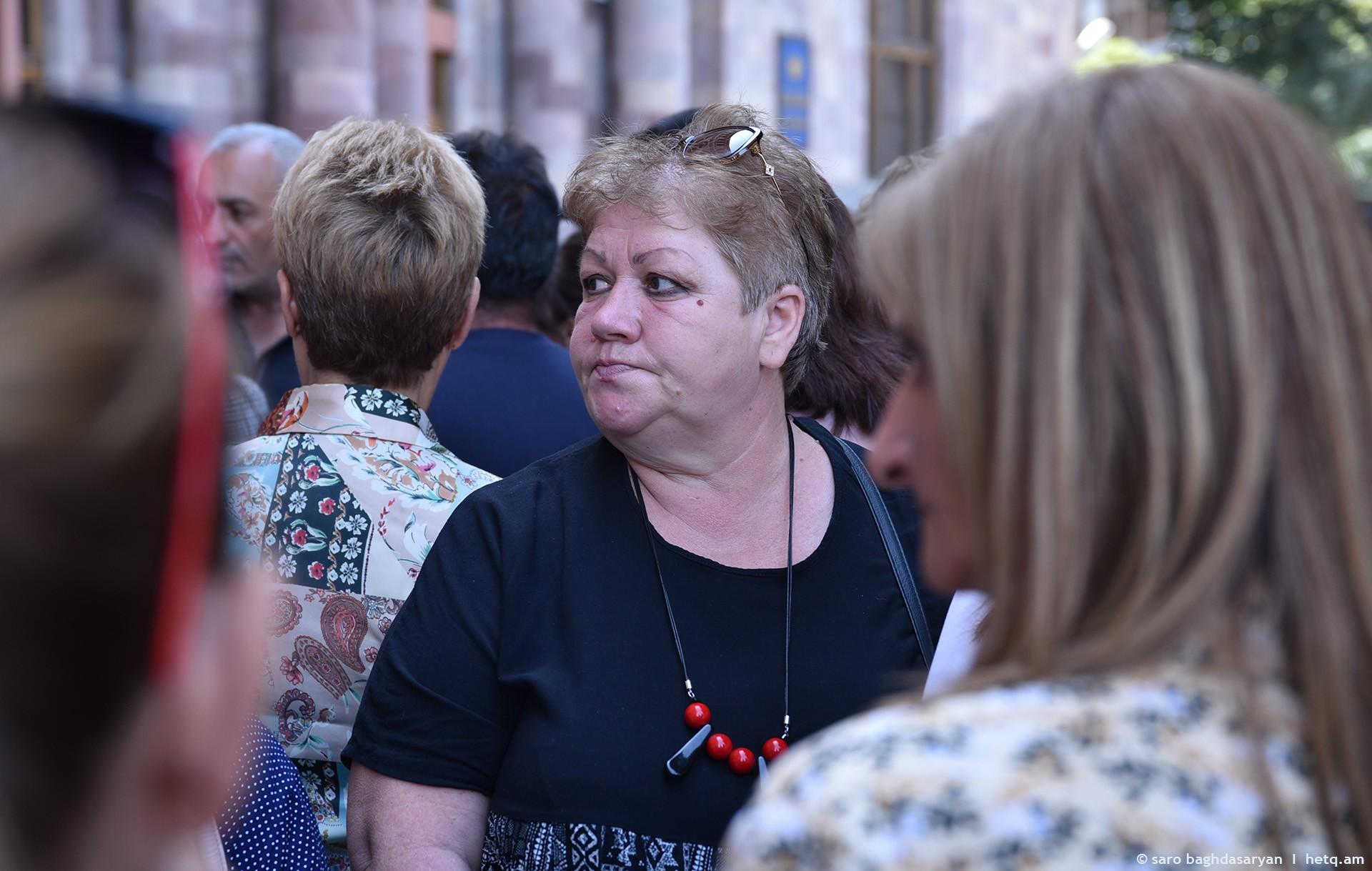 Mr. and Mrs. Harutyun Kocharyan lived in Karvatchar for eleven years. Both fought in the first and second Karabakh wars. Mrs. Kocharyan was injured in both, partially losing her eyesight.

She told Hetq that when she was discharged from the hospital last year and was told she had five days to pack the family belongings and leave, she went home to find that the place had been looted.

The Harutyunyans now live in a Yerevan dormitory room with Mrs. Harutyunyan’s sister.

Former Hadrut residents told Hetq that a letter they sent to the Armenian government, asking for housing assistance, has not elicited any satisfactory response. 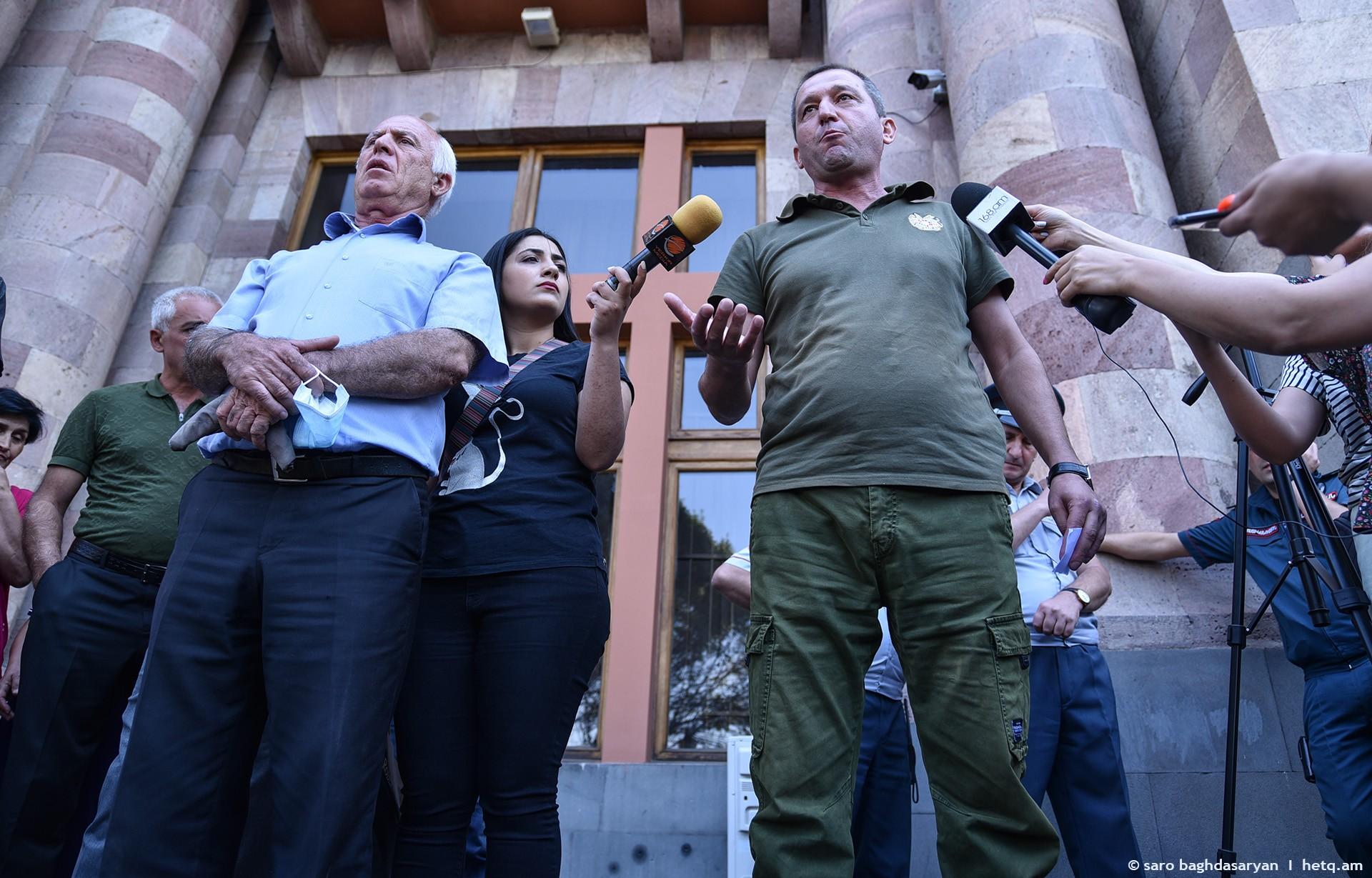 Artur Stepanyan, one of the demonstration organizers, noted in his speech that 2,500 people were displaced from the Hadrut region last year.

john 2021-09-20 02:50:45
hey Hadji M. , congratulations ! you have clear sight over the aim of that infam invaders , stealing and murdering all who resist their lust of great-turkish empire ! Armenians in ocupied Karabakh will become 3rd-class citizens , underdogs, slaves : Just see how they treat POWs , against all international war agreements . They still believe, they can do whatever they want -- noone of these minsk-group cowards tells/ does anything against them ! They feal undefeatable ... poor ,arrogant ignorants they are ! GOD JHWH will answer and make JUSTICE PS: they have LOTS of lands , but don't plant nore take care of them ; but they want more and more and more
Hadji Murad 2021-09-19 02:08:39
@Tony Martin It seems like you are drug addicted or drunk. Why does Armenians want independence? They know Azeris would never give and they are continuing the genocide. Panturkism is their goal. Karabakh, Armenia without Armenians and their cultural evidence, heritage. That's typical for Türkisch behavior.
Tony Martin 2021-09-18 05:05:02
Perhaps the Armenians displaced from Karabakh should apply to Azerbaijan to return to their homes. Those Armenians who are still living in Karabakh will have to become Azerbaijan citizens if they wish to stay so there is no reason why the displaced Armenians should not lead the way. It might prove that it is possible for the Armenians and Azerbaijan people to live together in peace. Why wait for the next war in 4 years if reconciliation today can prevent it?
Ruben dadoyan 2021-09-11 08:17:01
Armenia has no legit government. The country is managed by idiots.
Varouge 2021-09-10 06:03:52
Let’s see if the government as the empathy prowess and the foresight to do the right thing.