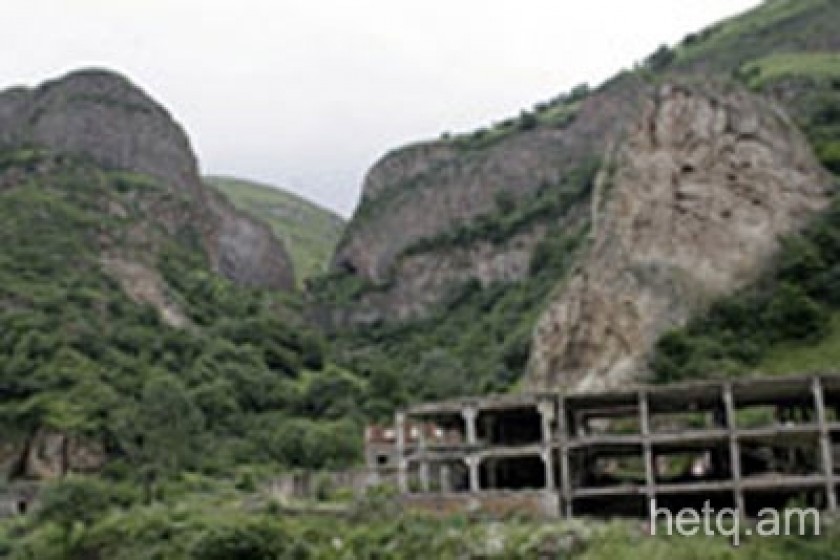 On April 3, 1993, Armenian forces liberated the region of Karvachar (formerly Kelbajar): Since this area has been repopulated with mainly those who had been deported from the Shahumyan region, the government of the Nagorno-Karabakh Republic has renamed it New Shahumyan, with the regional center called Karvachar.

Nor Shahumyan covers an area of 1,936 sq. km and is the largest of the liberated regions by territory.

Everybody who lives in the villageof Tzarin the New Shahumyan (Kelbajar) region is related, except for two or three families. Eight years ago, Samvel Simonyan, a resident of the villageof Zolakarin Martuni, came to Tzar, fell in love with its natural beauty as well as the khachkars and torn down churches - testifying to its ancient Armenian character – and decided to settle down here. He is the village head in Tzar today. Samvel helped his brothers, parents and other relatives move here gradually.

Sevada Simonyan is Samvel's brother and the principal of the secondary school in the village. He came to the village in the winter of 1999 with his wife and two daughters. Another daughter and a son were born at his house in the village. Sevada's mother was the midwife at the births; the villagers call her Grandmother. She established herself as midwife for the whole village a long time ago.

Sevada emphasized that his motivation for resettling in Tzar was not socio-economic by any means. They used to make a living in Zolakar just like all the rest – cultivating land. They had also gone to work abroad on a number of occasions. Sevada said that he was inspired by his brother's patriotism and besides, “Moving would be a change, it would be interesting.”

“You could say that we only have one poor family living in our village,” said Sevada, “Vaghinak Movsisyan's family.”

Vaghinak, the father of eight children (seven girls and one boy), came to the village from Vardenis. His wife, Haikuhi, was a refugee from the Khanlar region. Vaghinak's family moved to Tzar in 1999. Haikuhi works as a janitor at the school, and her husband is in charge of supplies there. Their eldest daughter is fourteen, and the youngest is only 40 days old. Four of their children are in school. Haikuhi has no complaints about life in general, but she is living proof that raising eight children is not easy. The children wear old clothes. They do not have any toys. The older children make houses of metal sheets in the yard. The children are bathed and combed only for “special” occasions, for example when “journalists from the city” come to visit them.

“Besides them,” said Sevada, “Everyone is more or less well off.”

Sevada's wife Lyuda is a teacher of Armenian language and literature. Sevada himself teachers geography and history.

“My own background is in law, though my education was incomplete. But over the past eight years I have learned so much history and geography with the children that I can qualify for a certificate any time I choose to do so,” laughed Sevada.

The problem of a lack of teachers is as acute here as it is in the rest of New Shahumyan's villages. The children do not learn English. Most of the teachers do not have a university education.

“Although there are many problems in the village now, you cannot compare the situation to the early years,” said Sevada, “When the villagers were forced all year long to go on foot to Karvachar, the regional center, or Vardenis to get groceries, and carry the sacks of flour, sugar and other products on their backs.” Sevada recalled how the three-month old son of one of his brothers had been poisoned by spoilt milk and died within a day, because there was not even a horse to get him to the hospital.

Now many of the villagers have cars. They prefer to go to Vardenis, not Karvachar, to buy groceries because everything is cheaper there. The lack of a shop of their own remains one of the biggest problems for the villagers.

Electric supply lines have already been installed in Tzar. The village will soon have electricity for the first time since the villagers moved here. The residents awaited that big day, which would end their long and dark evenings of candlelight, when domestic chores were ended, and there was nothing left to say and not even a television to help pass the time. They had to light the oven or the stove every time they simply wanted a cup of coffee. The simple process of taking a bath was an elaborate ceremony.

Sevada said proudly that his village was a true find for archeologists and historians. The village is located on the highest point in the region, surrounded by valleys. Sevada showed us a ramshackle house whose columns had been made of stone instead of the usual logs. This house, called Hazarashen, was built in 1658 by one Avanes. The villagers were convinced that it used to be a noble's mansion at one time and the village was a former capital of Armenian nobles.

Sevada and Lyuda receive the Nor Shahumyan newspaper from Karvachar. They had kept an old article from the paper which was about their village. The article is an excerpt from Armenian Monuments in the Occupied Regions of Soviet Azerbaijan, the work of an expert in monuments, Samvel Karapetyan.

That document said that one of the oldest mentions of the village of Tzar dated back to 1289. The village had four churches, a cemetery with khachkars and two monasteries were located nearby.

The Mother See built in 1225 stood in the center of the village.

The Saint Grigor church was built in 1274 and was one of the two churches preserved to this day. The ruins of both of the other churches bear Armenian letters. There are some cross-stones standing next to them, while others lie nearby.

Armenians lived here up to the 1730s and 1750s, when the Kurdish and Turkish nomadic tribes invaded the region. The Kurds who lived here later renamed the village Zar.

In his work, Samvel Karapetyan noted that the destruction of Armenian monuments in Tzar reached massive proportions during Soviet rule, especially the 1940s and 1950s. It was then that the two churches, cemetery and monasteries were pulled down. The rocks were used as building material for schools and other buildings constructed for the Kurds in Tzar and Chrak, a neighboring village.