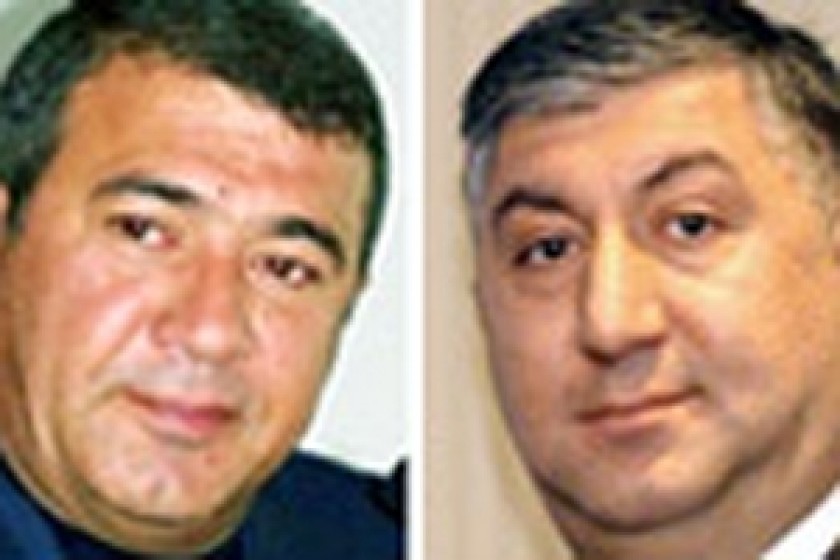 Khachatur Sukiasyan supported the candidacy of Levon Ter-Petrosyan in the 2008 presidential elections and has paid the price. Even though he was “granted” his freedom after coming out of hiding, the preliminary investigation in his case continues.

Then too, criminal charges were levied against his brother, Saribek Sukiasyan, just last month. This development, however, has more to do with the attempt to strip the family of their assets and property.

Ruben Hayrapetyan, President of the Armenian Football Federation and a Republican Party MP, has played a pretty significant role in this property seizure process. Mr. Hayrapetyan confesses that for many years, especially during the days of the first president, his relations with Khachatur Sukiasyan have been strained. When the government put the “Bjni” mineral water company, owned by the Sukiasyan family, up for auction, the sole bidder turned out to be Ruben Hayrapetyan, who finally managed to “purchase” the company late last year. A year ago, at a press conference on the subject, Ruben Hayrapetyan advised those who were speaking from a position of morality to take a look back at the 1990’s and see the methods employed by the Sukiasyan family to amass their assets, including the “Bjni” plant. “Let all the do-gooders take a good look and see how their beloved Sukiasyan’s purchased or grabbed what they now own. Was what they did moral? If the Sukiasyan’s accept the fact that what they did was immoral, then I have done the same,” said Mr. Hayrapetyan. “Let us not politicize the issue. In a year’s time we will see if it was political or economic.” The past year has shown that MP Hayrapetyan, based on economic interests, wishes to purchase especially those factories that belong to the Sukiasyan family.

One year after the interview mentioned, on February 12, 2010, law enforcement officials raided the offices of Sil Group and took into custody, Saribek Sukiasyan, Chairman of the Board of HayEconomBank, and Artash Stepanyan, Director of the Ayrarat Marketplace. The official explanation for the raid is that Gor Davtyan, Director of Audit Ltd. allegedly sent an SMS message to his friend claiming that “Sukiasyan and Artash threatened to kill him unless he signed certain documents.” Days later, Yerevan police Chief Nerses Nazaryan announced that Gor Davtyan originally had said that a gun was used to threaten him and that was why the indictment included the use of a weapon. However, at present, when Davtyan has refused to testify about any gun, the police removed mention of a weapon from the official indictment. Saribek Sukiasyan’s lawyer, Yervand Varosyan, says, “We are dealing with a case of shady manipulation. They take testimony from one guy and start an investigation on that testimony alone. An indictment is prepared and a man is arrested.” Sukiasyan and Stepanyan were freed three days after being arrested. They had to sign an affidavit that they wouldn’t flee the country. They have been charged with the crime of “involvement in a premeditated group conspiracy to imprison another for personal gain” They face a 3-5 year sentence if found guilty. Police Chief Nazaryan also stated that when law enforcement arrived on the scene they found Saribek Sukiasyan, Artashes Stepanyan and Gor Davtyan in the locked Sil Group office. The police also say they confiscated the documents Davtyan was being forced to sign. Sukiasyan defense lawyers, Lusineh Sahakyan and Yervand Varosyan, have already made the video tapes of the office security cameras available to the press. The photos show Gor Davtyan calmly leaving the Sil office. “So it turns out that Police Chief Nazaryan circulated information that can only be described as false. Either the city police are deceiving the investigative unit or else, knowing the facts, they are trying to deceive the public. In both cases, the police aren’t acting correctly,” says attorney Lusineh Sahakyan.

“The criminal case was formulated on fabrications. The aim is to deprive us of our new plant and to smear our good name. The political motivations for this are known to all,” Saribek Sukiasyan said in his public statement.  “I would like to inform all, that no one will be able to strip us from our property or break our spirit by conducting such a false criminal case or by launching an indictment against us. I hope that time will never come when we will be forced to publish all the names of the bandit group that wishes to steal away our assets. The only thing that guides our actions is a business approach.” According to the police statement, Gor Davtyan, who owns 41% of the Byuregh CJSC stock, sold stock worth 105.7 million AMD to Aspram Tonoyan, the wife of Saribek Sukiasyan, in October, 2008. However, about one year later, the Court of Cassation deemed the transaction null and void, after which a new stockholder appeared in the CJSC who expressed a desire to buy the shares he owes. The statement reads, “It was to inform Saribek Sukiasyan of this that prompted Gor Davtyan to visit the Sil Group office and where Saribek Sukiasyan and Artash Stepanyan forced him to sign certain shareholder documents.” The police did not publish the name of the new shareholder in Byuregh, who, it turned out later, was in fact Ruben Hayrapetyan. The attorneys argue that what actually happen is the exact opposite of the police version of the story. Accordingly, on February 11, Gor Davtyan telephoned attorney Ara Zohrabyan and told him that Ruben Hayrapetyan threatened him and took him to the police station and the prosecutor’s office, where he was pressured into selling the Byuregh shares not to the Sukiasyans but to Hayrapetyan. “Gor Davtyan refused and telephoned attorney Ara Zohrabyan and requested a meeting with Sukiasyan’ probably expecting his assistance. Sukiasyan meets with Davtyan who, trembling, recounts what has happened and asks Sukiasyan to help in the legal formulation, so that he can pull out of selling shares to Hayrapetyan,” says attorney Lusineh Sahakyan, adding that Zohrabyan drafts a corresponding letter addressed to Hayrapetyan in which the legal reasons are underlined explaining why he can’t purchase the shares.

“In a strange twist, right after this the Sil office is raided. Gor Davtyan is taken into custody and held under arrest for several hours,” notes attorney Sahakyan. “We were in the Erebuni police station till about 5:30 in the morning on February 13 and there we spotted Gor Davtyan, registered as the injured party in the case. He was there the whole day. A group of cops were constantly escorting him from one room to another. They took him to see the police chief and then to the investigations unit,” attorney Yervand Varosyan continues. The defense team notes that Gor Davtyan is actually an injured party in the affair and he seemed pretty disconsolate in the police station. He was sitting with his head in his hands and looking for help. The lawyers also say that they saw an individual at the station who absolutely had no right to be there. This mystery man was in the shadows, following Davtyan. “At this time, we cannot publicize the person’s name since it would throw a wrench in our defense tactics. We know who this person is and we have irrefutable evidence placing him at the side of the injured in the police station. We will go public with this in due course,” says Yervand Varosyan. The lawyers refuse to say whether this person is in any way connected to Ruben Hayrapetyan. They say that have a whole dossier contradicting the police version of the matter, but that they are not preparing to submit it to law enforcement right now. “We understood the sooner we hand over evidence to the preliminary investigative unit, the more time they have to alter the facts. They start to get hold of other evidence and fabricate the whole affair.” Ruben Hayrapetyan has so far refused to comment on the case. The police, according to press reports, are hot on the heels of Gor Davtyan, who is said to have fled Armenia after the incidents described.

P.S. - “On February 22, just ten days after launching a criminal case against Saribek Sukiasyan and Artash Stepanyan, Ruben Hayrapetyan purchased (in any event he signed a contract) the Byuregh shares owned  by Gor Davtyan and Robert Harutyunyan.  Hayrapetyan thus became a 90% shareholder of the firm. We believe no further explanation is needed,” noted attorney Lusineh Sahakyan in her statement.