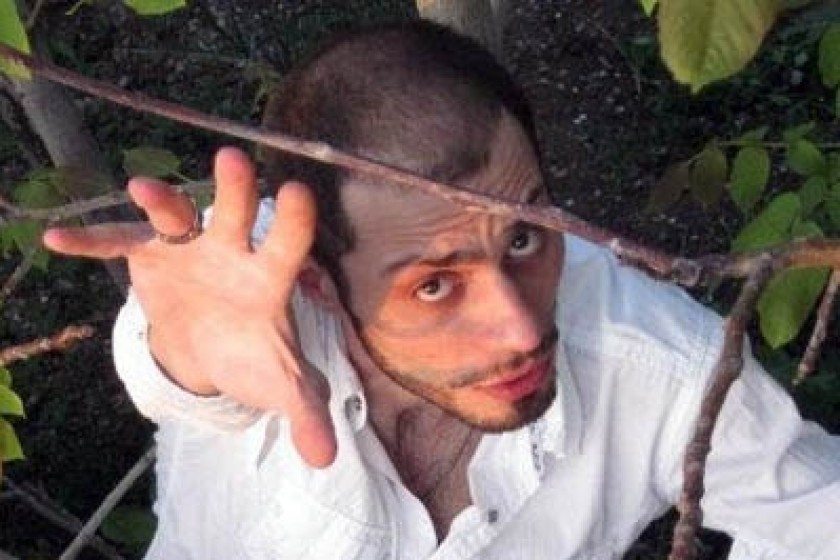 Director Arturo Sayan: "Sometimes I feel like that cat on the hot tin roof"

Perhaps the time has come to accept those offers that will open the door to wide possibilities in front of me, especially to live and create overseas.

It was November 2009, in the hall of the Theatre Workers’ Union before the play. I was attentively scrutinizing the movements of the director, Arturo Sayan. They were quick, deliberate and full of vigour.

Sayan was about to present his version of Eugène Ionesco’s La Cantatrice Chauve (The Bald Soprano).

A few days later, the press in Armenian started to write about the play. Here's one review.

"Theatre goers and critics single out Arturo Sayan’s version of Ionesco’s absurd drama The Bald Soprano. Many are interested to know why the young director picked this play when the theatre of the absurd has no track record with theatre goers, or, if Sayan is essentially carrying out his theatrical experiments outside the realm of professional theatres, where is that platform and why hasn’t he selected the professional theatre to stage his works?”

During this period, the director promised Armenian theatre goers that he would soon stage Tennessee Williams’ Cat on a Hot Tin Roof.

Arturo Sayan is now keeping silent. I met up with him at a Yerevan cafe. He had the same vigour and glow in his eyes as before.

Theatre goers were waiting for your new plays. What was the reason for the delay? What are you busy with now?

My inner being is a bit mixed up. I know that I haven’t chosen the wrong profession. But I’m not doing almost anything in the theatre today. Over the past few years I have applied to various organizations for assistance.

The door has been shut and I tried to enter through the window. All in vain. After each rejection or unanswered letter, I ask myself if I’m perhaps not worthy. Then I calm myself down. Frequently, good things just don’t happen. I have often spoken about my new projects and presentations.

Two years ago, when you staged Ionesco’s The Bald Soprano, your audacity and vim were more apparent. What happened?

The staging of The Bald Soprano was for my diploma. It was shown at the Chamber Theatre and then at NPAK (Center for Contemporary Experimental Art) and the Theatre Workers’ Union. There was at last something insane and warped being staged. It was a big risk for me at the time which I could do with Ionesco.

I know now that I did the right thing. I was in high spirits afterwards. Then we started to work with director Yanna Kaprielyan on the staging of Cat on a Hot Tin Roof. Vahe Hayrapetyan wrote the music. But we have yet to raise the funds to stage the play. You know I don’t get disappointed from obstacles, but when they are artificial it disgusts me.

You are familiar with Armenian theatre goers and the theatre of the absurd. Is this genre comprehensible to them?

Our public is still not used to the genre. There are values that we are still dependent on ten and twenty years later. We can’t seem to accept what is new. I bow before our great actors and directors but at the same time I ask whether or not we are ready for the new, the mad drama.

Here is where the disappointment sets in. Yes, I love my work despite the fact that I appear removed from the theatre. It’s all the same. I am in it.

It just that when there are no words of praise everything crumbles. You’re like a little kid who wants that piece of candy. Sometimes I feel like that cat on the hot tin roof.

Lately I saw your book “Ravings of a Clown”, which, I believe, is a consequence of your not working in the theatre. But I still continue to believe that Arturo Sayan can only be and remain complete in the theatre. What are your upcoming projects?

Every time when I see that the seeds I have sown are healthy and sprout, I take care of them. Suddenly, for some inexplicable reason, they wither and don’t grow into trees. I think that I’ve appeared at the wrong time and place.

Perhaps the time has come to accept those offers that will open the door to wide possibilities in front of me, especially to live and create overseas.