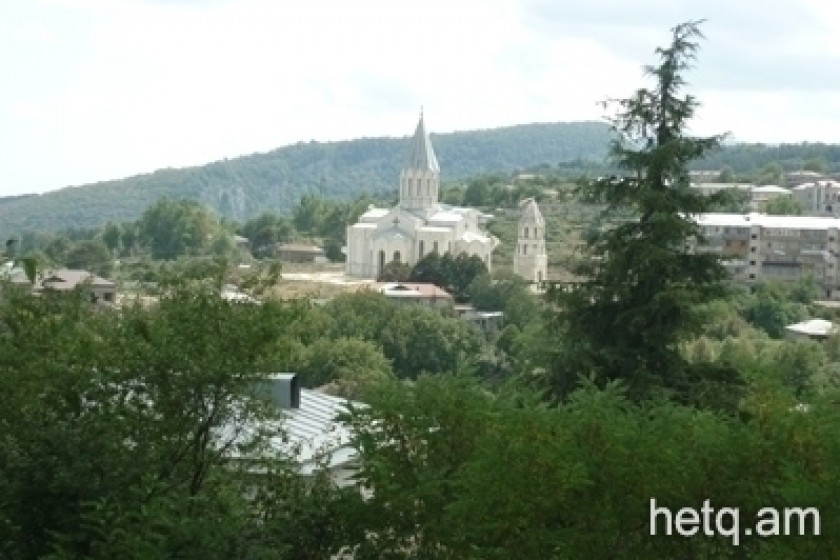 Twenty Armenian artists from around the world have converged on the historic Artsakh town of Shushi to participate in Land and Technologies project that is a part of the Shushi Art Project.

The art on display is a mixed bag of exhibitions and installations that allow the artists to mingle with local residents.

Harry Vorperian, an artist from America who heads the project, was excited to talk to Hetq about how the idea to bring artists to Artsakh was conceived and what their experiences had been.

Vorperian said he had a personal exhibition in Los Angeles two years ago and the responses were so positive that he decided to stage a group exhibition there.

“Shushi is like a blank canvas for artists,” he noted.The artist said that he thought about taking the exhibition outside the confines of L.A. and figured Shushi would be the most appropriate venue since the town has always served as a cultural center for Armenians. He added that work needs to be done to see that Shushi’s cultural legacy restored for our times.

This reporter asked Vorperian how it happened that his visit to Shushi coincided with the opening of the Shushi Art Gallery.

“When I visited Shushi in July, work on the gallery was under way. I asked if we could use the space and were told we could. It’s a gallery of international standards. That’s how our work jived. It was a pleasant solution. I don’t know the details of the gallery’s future plans but I know they are looking for a curator to make the place come alive.”

Vorperian told me that 8 of the artists were from the States and 2 from Europe. There are also 10 from Yerevan.

I asked about the installation of photographer Ara Oshagan where huge blown-up photos have been hung in the empty window and door archways of a ruined building.

“The reaction has been fantastic. It’s a very current theme and something that local residents can relate to because in the windows they would see their parents and friends. Let me tell you about an incident that touched me. Two days ago I was walking past the building towards the hotel and saw a guy kneeling down in front of one of the photos. He was trying to retie one of the ropes holding down the photo. It was a great gesture and shows how we have been received by the people of Shushi.”

Vorperian told me that art works had been installed at other sites as well.

His installation and one by Ashot Avagyan are located at Jdrdouz (Dziatap); Sahak Poghosyan’s installation is on the ramparts of the fort, and Charles Khachatourian’s half ton piece has been moved to the gallery.

The Shushi Art Project will wrap up on October 14. Nevertheless, Vorperian said he was sure that others would continue the work to make Shushi a center of arts and culture once again.

P.S. – Hetq will be talking with some of the other artists in the project soon.