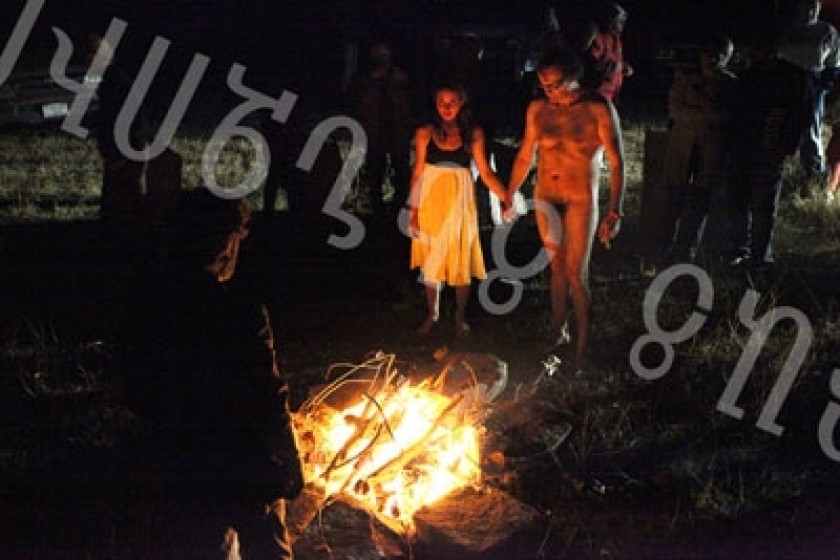 What happened in Jdrduz has not yet been publicized

“Being in Jdrduz generated a need to disturb the created comfort. It was certainly the atmosphere that inspired me and the only thing I could sacrifice in the fire of “sacrifice”, as a soldier at war, was the vulnerability of my own body”, Samvel Saghatelian.

It would have been a great omission for me, a cultural journalist, if the presented material had not been documented in this article.

The subject to be touched upon here by me as well as by the author and participating artists, at a glance may probably seem incomprehensible, at a second glance insignificant, and the third is left at your discretion for a reader is free to visualize every detail with one’s own approach and perception.

What happened at the “Shushi Art Project” during the implementation of Ashot Avagyan’s “Sacrifice” performance perhaps remained inexplicable for many and some labeled it as “another baring show”.

What had actually happened and why in Shushi?

Haroutyun Zulumyan, an artist participating at the “Shushi Art Project” believes that it was the conventionality of the nature of the site the action was taking place at that caused its unexpected and spontaneous fulfillment.

“The creative action that unexpectedly happened provoked opposed comments, which is the best proof for the establishment of any creative process in contemporary art.

A place with such powerful nature and heavenly spirit, where quasi the Earth and the Heaven meet, gave rise to an unspeakable desire, or perhaps it is more accurate to say a passion in the artist Samvel Saghatelian to take away the excess, including clothing, thus contributing to another artist’s, Ashot Agavyan’s action.

In the scope of the “Land & Technology” project, that yearning attained such natural, harmonic sonority that the artist fulfilled his intense desire with no hesitation, certainly with prior agreement with Ashot Avagyan.

The area that was a symbol of a mighty power of Death quasi regained a chance for resurrection thanks to a young naked couple where Death and Life, Man and Woman, Earth and Heaven intersected.

The image bearing a death of a soldier was made noble by a symbol of resurrection”.

Samvel Saghatelian, the known author of “Nationwide Blanket” of the Project

Artist Samvel Saghatelian, who lives in the United States, was visiting Armenia in the scope of the “Land & Technology” Project. His presented artwork in Shushi was a Blanket made by a number of Shushi ladies and the artist himself. The idea of lining the Blanket in a way to get the historical impact of the Blanket, its story of creation and the map of Nagorno Karabagh was exciting.

In the frames of the same Project another artist, Ashot Avagyan fulfilled his “Sacrifice” installation-performance dedicated to the memory of the victims of the battle of Artsakh.

The ideological nature of this installation was executed when the artists participating at the Project started to throw into the fire all that as they believed is connected to the area, war and their memory. For one it was a valuable binocular, for another-pieces of a self made artwork…

The participants of the “Land & Technology” Project were not fast in expressing their points of view on the interpretations. Only after the Project Vachag Ter-Sargsyan, an artist that had moved to the States comments on Samvel’s performance during an on-line interview. “Yeah…Anyone would probably like to act so some day… But many of us search for defects in our nudity. Samvel has no complexes in this respect and has never had any… He is in harmony with his nudity. This is one of the greatest features of an artist – be in harmony with yourself and not play purity. The natural location of Jdrduz and Ashot’s similarly affective installation, plus the overall energy which veiled all of us, reached its culmination via Samvel’s performance. The “Shushi Art Project” thus gained a complete form”, says Vachag.

Jdrduz, an area of intersection of Heaven and Earth

This is what I was talking about days after the Project’s completion with the author of the Blanket Samvel Saghatelian, Robert Abrahamyan and Haroutyun Zulumyan.

The event that occurred in Jdrduz initiated by Samvel had a risk of discussions and at the same time of remaining closed.

Today the topic is even more relevant in Yerevan when Samvel and Robert showed up at an interview with “Open Censorship” expression on their T-shirts.

All knew what happened during Ashot Avagyan’s “Sacrifice” performance and whatever took place at a time was closed to journalists and those who were not present at the event in Shushi.

And what happened was ... "sacrifices" made ​​by the artists were not restricted only by burning of objects… Samvel, who prior to that presented to the Shushi people his large Blanket, suddenly decided to completely disrobe and go around the "sacrifice" fire.

"The spontaneity, the state was in line with the energy of Jdrduz. At that field a person can return to the initial state of Yin-Yang and lay a foundation for a new dialogue for artists”, said Haroutyun Zulumyan, who at that time was around the "sacrifice" fire.

Samvel who initiated disrobe around the fire suggests one of the opposite sex to join the process. Surprisingly, this one was an Argentine who came out of people and took Samvel’s hand.

The red tights the Argentine was wearing appear on the ground. Hand in hand, the completely naked Armenian and an almost naked Argentine girl perform magical one turn around the fire and come back to the initial point. “Her nudity was enough. The girl’s partial exposure even more stressed my intention”, says Samvel.

War, women and the importance of soil

Already in Yerevan, while discussing Samvel’s action, Haroutyun Zulumyan made a great point on women in Artsakh which determined their state and position during the years of war. "They were concurrently not present and present at the battle field, because every man who in one day became a soldier was the bearer of this spontaneous situation, like the spectators were seeing Samvel naked and defenseless, but brave, because he was passing that period through the fire with a woman, the embodiment of soil”.

Artsakh artist Robert Abrahamyan believes that Samvel’s action caused collision of interpretations by the mediation of both folks and spectators and after examining the situation professionally it appeared that, indeed, a number of different elements joined around one thesis. “In simple terms, naked body-religion-morality ratio was on a plane and it is perceived in the context of art. The risk of seeing the naked body, rendering and presenting it, in fact was in the birth of a new art object in the area through the modern spirit hidden by nudity", says Robert. 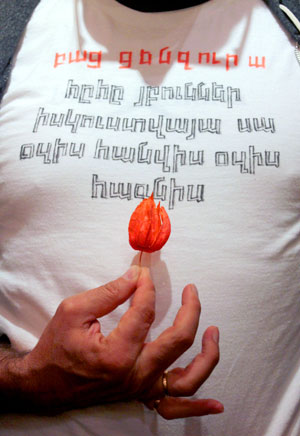 “Shushi people are simple”, says Samvel. What happened around the fire was the artist’s subjective approach to the idea of “sacrifice” and can set a foundation for a new dialogue, a living witness of which are the designed T-shirts with “Open censorship. Hehe… Fuckers: its art, wanna undress or dress” expression in Artsakh dialect established and refined by Samvel and Robert.

Author of the expression is a resident of Shushi, Artsakh who raised this idea during the tension caused after the performance.

And finally, all of this took place during another artist Ashot Avagyan’s “Sacrifice” performance, who thinks “Samvel’s action was an organic continuation of the performance which was placed in the general context and had an ideology of its own”.

P.S.  The logical continuation of what happened in Jdrduz according to the present artists depends on the clear treatment of the material. So far there are the T-shirts with the first record representing the primary impression.