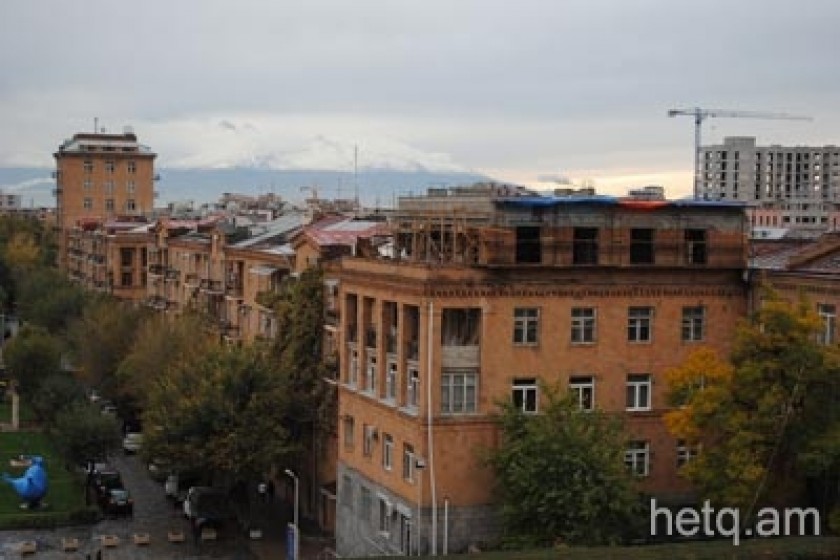 Walking down the steps of Yerevan’s Cascade Complex, I suddenly felt a sense of asymmetry; that something was amiss.

What is “out of place” is the construction project of Armen Sargsyan, a former Armenian Prime Minister.

One month ago, work began on a one story addition atop a building that overlooks the Cascade’s manicured lawns and Cafesjian Museum.

It seems that Sargsyan, who owns apartments 74 and 75 at #3 Tamanyan Street, wants more living space on this prime piece of Yerevan real estate.

The building was built in the 1950s and is part of a series of buildings that encircle the Cascade’s green space; a popular meeting place for tourists and locals alike.

But the edifice has structural problems brought on by a damaged sewer pipe that   serviced a kindergarten that used to operate on the ground floor. The escaping water has damaged the building’s foundation.

The fact that the subway passes right beneath the building also increases the concerns of building residents that it cannot safely hold the weight of the additional floor now being built.

Anoush Arakelyan, a building resident, says that her floors shake when the subway passes by. This summer, Arakelyan was told by workers renovating her apartment that the walls were dangerously out of line.

“I was sick for a week. When I returned home, I was dumbstruck by what I saw. The new floor was already standing,” says Arakelyan.

When I asked whether Sargsyan had indeed obtained such permission and whether a structural examination of the building had been conducted, the former prime minister’s office in London assured me that all the legal procedures had been followed and that the Yerevan Municipality had given the green light for the construction to go ahead.

Residents claim they were never consulted prior to the construction. Vladimir Dilanyan, who owns apartment #28, says he called the municipality hot-line when the construction began. He says that two young men came around and assured him that the issue would be resolved. They left and Dilanyan never heard back from them.

Irate residents have also sent a letter to President Sargsyan, requesting that he personally intervene and halt the construction. Their letter was forwarded to the municipality.

The municipality issue a statement to the press, saying that it had received a project proposal several months back from the Kentron Administrative District to add mansard roofs atop #3 Tamanyan Street and a building facing it. The statement said that such additions would not violate the symmetry of the buildings or their architectural cohesiveness.

When residents of the building opposite #3 Tamanyan Street heard about the plan they went into a panic and immediately called the mayor’s office. They were told that nothing would be done to their building.

According to construction specialist Sarhat Petrosyan, such projects are acceptable if done in a professional manner, after examining the building’s structural integrity.

According to architect Gourgen Mousheghyan, the building has a unique exterior and symmetry that will be violated by such an addition.

Despite the protestations of residents, the construction will soon be completed.

As I was leaving, resident Lia Osipyan expressed her main concern.

“What worries us the most is the seismic condition of the building. Our safety is at risk.”