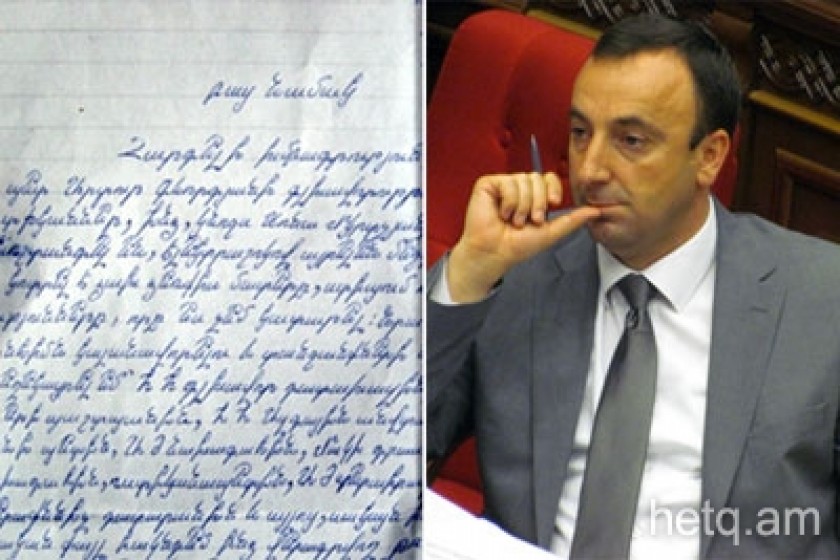 Pulling Teeth: Dealing with the Reformed Ministry of Justice

When Ministry of Justice Press Secretary Karineh Kalantaryan said, “Would should I now believe?” she meant, should she believe me or Gnel Ghalechyan, who heads the Press Affairs Division of the Ministry’s Department of Criminal Detention.

I responded, “Do you mean to say that I deceived you?” and turned off the telephone, not expecting a reply. I then erased Kalantaryan’s phone number, deciding to never again call him with any question.

For the last three years, all our requests to visit people held in Armenia’s correctional facilities have received the same refusal, even though the head of the press affairs head has been changed. The above conversation took place twenty days ago. On December 14, we received the first reply to our two written requests from Ghalechyan. We received the second reply today.

He responded because I called up the department last week, saying that we would show up to pick up the responses in person, even though they had claimed that they had answered. We had decided to take them to court over Hrayr Tovmasyan’s inaction.

Hetq had received a second letter from Arman Davtyan, serving time at the Nubarashen Correctional Facility. He had requested assistance in restoring his good name and innocence. Otherwise, Davtyan threatened he would commit suicide.

We met with his relatives and immediately wrote a letter to the Minister of Justice. It couldn’t be ruled out that Hetq might have been regarded as responsible for Davtyan’s suicide if he went through with his threat. Studying the case, we have concluded that there are grounds to charge several of the investigators involved. We wrote to Justice Minister Hrayr Tovmasyan, asking that Hetq reporter Ararat Davtyan be allowed to visit the Nubarashen Facility and to interview Arman Davtyan.

Our letter was addressed to Minister Tovmasyan, since after his appointment none of the Hetq staff have been allowed to enter any correctional facility. I know that the minister is quite busy with reforms and it’s clear that he has a certain attitude towards those serving imprisonment. But that is no grounds for him to violate the rights of those found guilty and of reporters.

Ghalechyan replied to our two letters that “due to a work overload, an interview cannot be conducted at this time”. The refusal we received three years ago was the same, word for word. The constant refusals over the past few years are why we wrote directly to the reform-minded minister this time. We know what the answer of Ghalechyan would be if we wrote to him.

Mr. Minister, the correctional facilities under your jurisdiction are not “over-worked”. When you so desire, you escort tens of reporters to events and on trips. If you are so over-worked, then why does a functionary of the prosecutor’s office show up to see Hovhannes Tamamyan (imprisoned former head of Police Criminal Investigation department)  to conduct bargaining regarding his house in Tzaghkadzor? This is just one incident.

Henceforth, you will be forced to set-up a round-the-clock patrol around the country’s correctional facilities in order to show what facility staff are actually doing to be so “over-worked”.