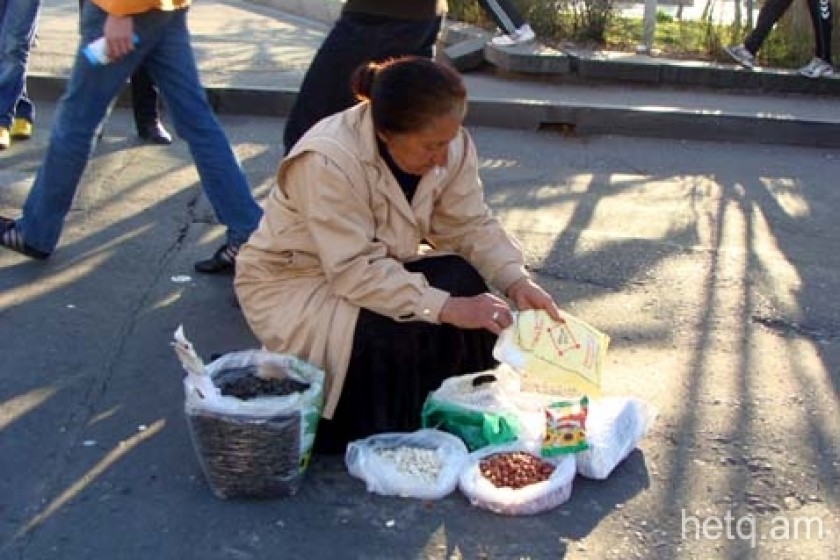 Reforming the Economy, Creating Jobs: What the Presidential Candidates Have to Offer

What follows is a synopsis of what the presidential candidates claim they have to offer regarding job creation, wages, and fixing Armenia’s economy in general

Hrant Bagratyan: The majority of this candidate’s election platform focuses on the economy. The program he is pushing is called “Just 100 Steps to Social Justice”.

The third step underlines Bagratyan’s belief that what is needed is to provide citizens with the opportunities needed to create businesses themselves rather than the state assuming the burden of creating jobs for all.

Bagratyan calls for the government to incentivize small business by covering the cost of business loan interest. The economist also promotes the concept of cluster-businesses.

Step 7 deals with the resettlement of Artsakh and the liberated territories via job schemes and pays particular attention to the relocation of Syrian-Armenians and Armenians who fled Azerbaijan. Bagratyan calls the initiative the “New Aleppo” program. It calls for the government to allocate $50,000 to each family that relocates for a minimum of five years and $120,000 for ten years.

Bagratyan says that through changes to the tax system, there will be a relative boom of small and medium sized business in Armenia. He presents figures showing that in 2012, some 52% of Armenia’s economy was controlled by 44 families.

The candidates program also calls for a new Labor Code to be drafted and adopted within the first year of his presidency that will limit employer from dismissing employees; especially based on reasons dealing with qualifications (Step 12). 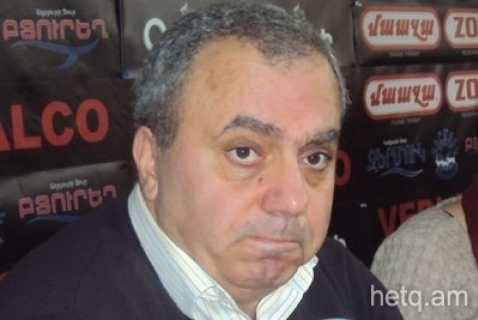 He also calls for the full taxation of large businesses in order to save SMBs struggling in unequal and unjust conditions.

Step 26 deals with drafting a new tax system for the rural-based economy and individual entrepreneurs in the form of land tax, patent payments and one-time payments.

Bagratyan program also deals with cutting the civil service sector (national, regional and municipal) by a factor of 1.2 to 1.5 which will result in an immediate wage rise by a factor of 2 to 2.2 (Step 51)

Step 79 envisages the creation of some twenty innovation centers, techno-parks and laboratories in Armenia and Artsakh between 2103 and 2017. “State business promotion centers must be opened in all regional centers.

Regarding the protection of SMBs, especially retail stores, Bagratyan calls for tighter regulation as to where the large supermarket chains can set up shop. The candidate also suggests that mobile markets be established in the country’s larger towns and that they get be subject to lower tax rates. (Step 82)

Bagratyan accuses the current government of preventing other entrepreneurs from entering certain market segments by levying very high start-up fees for producers and processors. He calls for the fees to be pegged to production output. “The list of businesses for which one must receive state permission must be cut threefold; from the one hundred today to fewer than thirty or so. It makes no sense why someone wishing to open a trade stall, drive a taxi or take measurements needs to obtain permission and pay some exorbitant fee. We will fix this issue in a year. (Step 88)

In terms of improving the lot of villagers engaged in farming, Bagratyan says that he will subsidize the production of agricultural produce.

Bagratyan points out that villagers are leaving their plots of land en masse, selling them whenever possible, and becoming farm labourers. Others migrate to the cities or emigrate. In Step 92, therefore, he calls for a radical change in policy to promote, both via legislation and in practice, the promotion of rural business and a struggle against large land holdings.

“70% of a villager’s labor winds up in the pockets of market owners,” notes Step 94, which calls for restoring markets designed for rural business in the cities and the establishment of new ones within a two year period.

Bagratyan’s platform also places an emphasis on the need to expand cooperatives and assistance centers that will deal with irrigation, agro-service and the preliminary processing of agricultural produce in the next five years. (Step 95)

Step 98 deals with the promotion of rural businesses engaged in producing “ecologically-pure” food. He argues that the aim is to breathe new life in family-run enterprises and those that depend on local cooperative efforts. 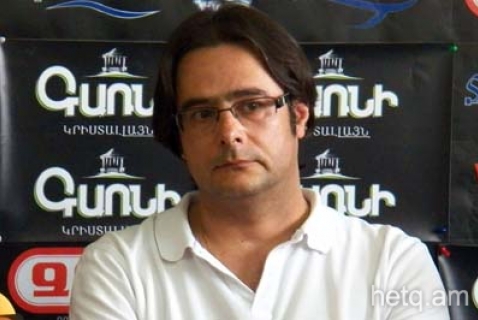 Andreas Ghoukasyan: This candidate calls his campaign platform “The Crisis of Statehood in Armenia: Action Program for the Republic’s President”.

Accordingly, the president is obligated, in conjunction with civil society, to define social oversight of the national wealth, to implement public scrutiny of the property belonging to   top national officials and their families, to return to the Third Republic all ill-gotten assets acquired via corruption and to investigate aspects dealing with the formulation of Armenia’s foreign debt and the proper expenditure of loans from international lenders.

Ghoukasyan posits that if the owners of illegal property acknowledge their guilt and cooperate in such investigation, the president has the right to propose that they retain ownership of said property, on condition that the full value reverts to the state with five years.

The candidate argues that the state is obliged to ensure that each individual receives fair wages and normal working conditions.

He is convinced that the fate of the country’s productive resources must not be dependent on the will of a narrow group of individuals. Thus, large enterprises must be in the form of collective property.

Ghoukasyan calls for the drafting of a seven year national development plan that will unite the government, private holders of capital and the entire society in one collective effort.

One of the goals of the development plan is to raise annual GDP to $60 billion.

The platform ends by noting that the president must serve society in such a manner that in the span of two years a new economic system is established “that ensures the participation of each citizen in the creation of national revenue and his share in its just control, according to each person’s investment.” 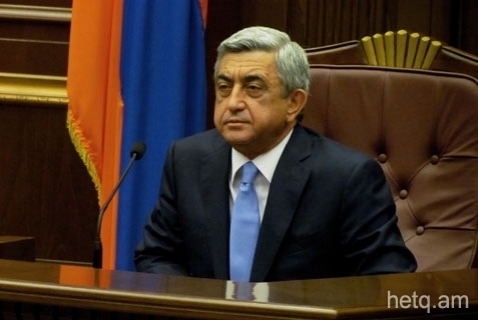 Serzh Sargsyan: President Sargsyan's campaign platform is called "Towards a Secure Armenia" and in it the candidate seeking re-election promises that "We will be living in a much better Armenia in 2018."

Surprisingly, nowhere in the platform do we come across any mention of the emigration crisis. The candidate also avoids mentioning the causes of the challenges facing Armenian today.

Pointing to the army as the number one guarantor of a secure homeland, Sargsyan says he will provide work and special education allowances to conscript soldiers.

The candidate says he will strive to facilitate conditions for domestic producers to increase their exports overseas.

He also promises to create free trade zones in Armenia and to draft a policy of systematic economic reforms that will help attract greater foreign investment.

The main goal of his development policy will be the creation of mid and high level jobs for qualified workers and to raise the productive capacity of the economy.

Sargsyan promises to create a legal and equal business environment for domestic and foreign enterprises and to pay particular focus on the continued development and modernization of the tax and customs sectors.

As the other candidates, Sargsyan also calls for greater assistance to small and mid-sized business start-ups – greater accessibility to credit, training resources, the promotion of women run business, etc.

The candidate has much to say about the need to incorporate new technologies into the economy but fails to provide specifics.

Regarding agriculture, Sargsyan promises to continue the investments and assistance thus far provided (diesel fuel, seed, fertilizer, accessible management) and calls for the implementation of flexible mechanisms in the credit market.

He says particular attention will be paid to grape growing and fruit cultivation and huge investments of new technology will be made in these sectors. Sargsyan will also do the same for the burgeoning fish-farming industry.

Sargsyan argues that new jobs will be created due to plans to intensify road construction work in the capital and other towns.

He also says the government will follow a development policy calling for a more balanced approach to investment and that the regions will be allocated a greater share of the state pie.

The candidate promises to pay particular attention to providing jobs to those with disabilities.

In the medical sector, Sargsyan plans to establish a state of the art hematological hospital in the country as well as an oncology center.

The candidate promises that new job opportunities will arise from his program to build new kindergartens in the regions and a network of modern technology laboratory centers.

Sargsyan states that the issue of youth employment will remain a top priory for his government and that the government will strive to raise the market competitiveness of young people and to promote business start-ups by young entrepreneurs.