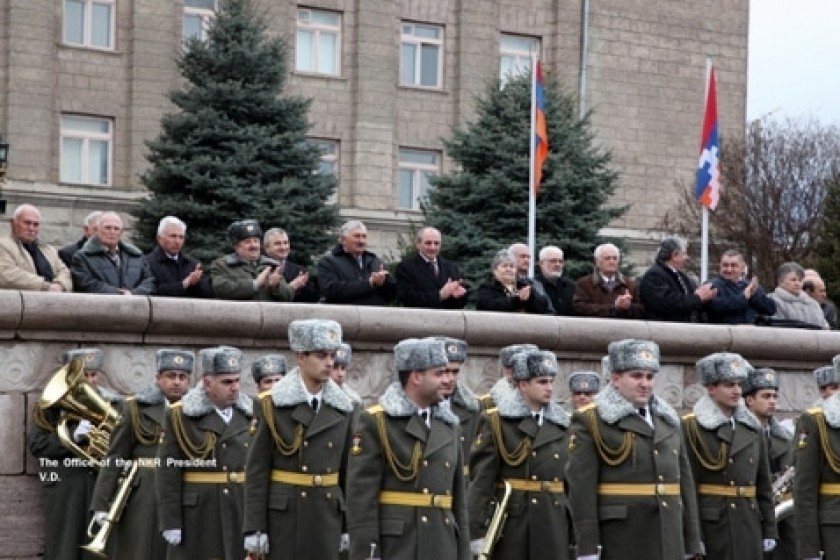 Artsakh MP Balasanyan: "I saw nothing in Renaissance Square yesterday that reminded me of 1988"

A public discussion on the theme “Elections in Armenia and the Conflict” took place yesterday at the Park Hotel Artsakh in Stepanakert.

It followed the presentation of a Civilitas Foundation report entitled “Armenia 2012; Election Year”, organized by Civilitas and the Artsakh Foreign Policy and Security Public Council.

Tatul Hakobyan: It’s no secret that many things are decided in Yerevan. In a few days the presidential election will take place in Armenia. What expectations do you have? How have the candidates dealt with the Karabakh settlement issue. Is the Karabakh issue even a factor in the election?

Vitaly Balasanyan: Till today, Karabakh faces the problem of integrating with Armenia. Perhaps from 1994 onwards, after the war, Karabakh has remained outside the domestic political landscape of Armenia for the simple reason that authorities in Armenia invited President Kocharian, the president of an unrecognized nation, to Armenia and appointed him prime minister. After this Karabakh remained outside the negotiation process and especially removed from domestic politics in Armenia. This is the primary reason why everything related to Artsakh is decided in Yerevan. When our leader showed up in Armenia, it is understandable that everything would be decided there.

Let me remind you that wasn’t the case in 1988. All the important decisions forming the basis of the documents of the movement were made in Karabakh. They all were directed to the same goal of reuniting Karabak with Armenia.

Yesterday’s celebration in Stepanakert’s Renaissance Square commemorating the 25th anniversary of the movement left a bad taste in my mouth. There was no trace of what we had struggled for in 1988. No one uttered the word ‘unity’. At least they should have made a call for ‘freedom’. But I heard neither. The fault is ours, both the people and the government.

Armen Sargsyan: Of course much is decided in Yerevan. But the problem is that we must struggle to see that Yerevan makes the correct decisions.

Tatul Hakobyan: Mr. Balasanyan, there’s an interesting situation in the Armenian world. In Artsakh and in the Diaspora people often say that the authorities in Armenia must be from Artsakh so that they don’t sell Karabakh out. Does this make sense or is it a somewhat naieve belief exploited by certain political forces?

Vitaly Balasanyan: I adamantly oppose such an opinion. The biggest mistake happened when Karabakh officials wound up in Armenia.

Yes, it’s a manner of holding on to power. Regardless of who is in power in Armenia, the notion that someone from Gyumri or elsewhere isn’t concerned about Artsakh and that only someone from Karabakh is, must be erased from our way of thinking. It takes us nowhere to think like this.

Tatul Hakobyan: Mr. Sargsyan, how are the presidential candidates in Armenia coming across on the Karabakh settlement issue? Only two, Serzh Sargsyan and Raffi Hovannisian, have said anything specific. Hovannisian has called for Armenia to recognize Artsakh and Serzh Sargsyan criticized him for it. In your opinion, just how interesting a topic is Artsakh in the domestic political life in Armenia and especially in the elections?

As to the statement by the Heritage Party leader that Artsakh’s independence must be recognized, we suggest something different. We talk about a strategic alliance between Armenia and Karabakh. Thus, Armenia will recognize Karabakh both de facto and de jure. For Armenia to recognize Karabakh today, suddenly after all these years of not doing so, would be a bit absurd.