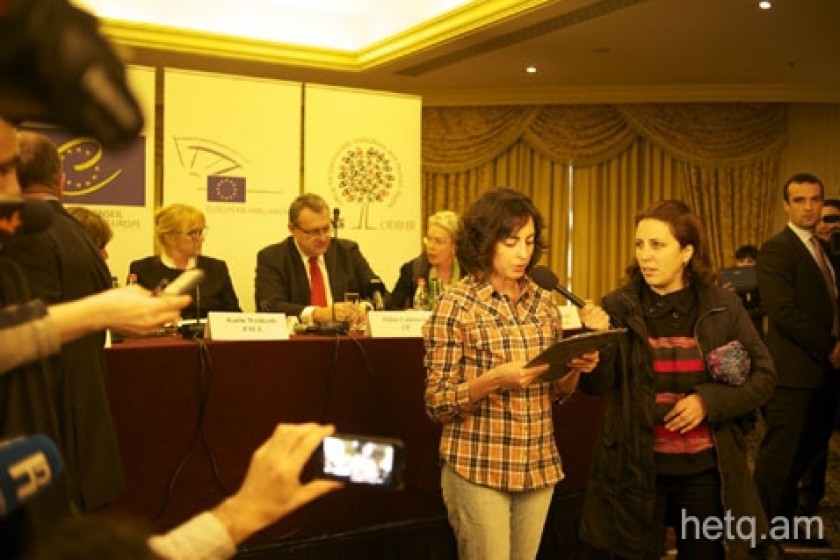 What follows is the statement read today by political activist Lena Nazaryan at the press conference held by OSCE PA election observers.

The OSCE observers walked out of the hall when Nazaryan took the podium to read the statement on behalf of the citizens of Armenia.

Dear political tourists, we have had enough of your efforts to legitimize the fraudulent elections.

The recent presidential election in Armenia, when compared to previous presidential elections, has registered one step forward and three steps backwards, two steps to the right and a half step to the left. In a word, they haven’t corresponded to the RA Constitution, to the demands of the Election Code as well as international standards.

The elections have proceeded against the backdrop of proposed reforms to the Election Code by the parliamentary opposition that were rejected by the ruling majority. Even though international and domestic observers, rights defenders and the opposition raised concerns, especially regarding glaring inaccuracies in the voter rolls, after the parliamentary election, nevertheless, the ruling authorities did nothing to fix the problem before this recent presidential election.

Of note is the fact that in the February 18 presidential election none of Armenia’s primary political opposition forces either nominated their own candidate or supported any of the nominated candidates. I refer to the Armenian National Congress, Prosperous Armenia, the AR and the Free Democrats. This is ample proof that the election was not truly competitive.

The fact that none of the primary opposition groups refused to nominate their own candidate or support any other candidate running, points to the deep level of mistrust of citizens and political forces regarding the electoral process.

Thus, the opposition forces in the parliament, from the outset, have labelled the presidential election as a farce and a show, since as previously noted, the ruling majority squashed the passage of election reforms proposed by the opposition prior to the election period.

Even though on the surface there was the appearance that important democratic freedoms were being safeguarded during the campaign, including the right to run a free campaign, in reality, the campaign was noteworthy by its competitive inequality in favour of the candidate of the regime. In particular, administrative resources and powers were put into the service of the latter. This was accomplished via pressure brought to bear on state and public employees to attend campaign events of Serzh Sargsyan and to vote in his favour.

The election campaign did not proceed peacefully. Violence was inflicted on candidate Paryur Hayrikian. The man was shot. Another candidate, Andreas Ghoukasyan, staged a hunger strike to protest the electoral process which he labelled a mere show. The press covered cases of violence even on Election Day.

The campaign also stood out by its lack of political and individual professionalism. Candidates employed the crudest of language and public relation stunts. For example, the various incidents that took place during the campaign conducted by the regime’s candidate were widely mocked by large segments of society. As a consequence, citizens tended not to take the election process seriously.

On Election Day, polling precincts were transformed into theatrical stages where citizens showed their attitude to the process. The press and social internet sites were full of ballots invalidated by voters who drew caricatures on them. They drew images of figures from the plant and animal world, images lifted from fairy tales and television cartoon characters. In one precinct, a voter literally ate his ballot as a sign of protest. It significant to note that according to official statistics, the number of invalidated ballots came in third place.

Reports of duplicate voting, ballot stuffing, bribes, and substitute voting and other scams were raised throughout the election itself.

Thus, yesterday’s presidential election in Armenia can be described as yet another normal appalling election.

Dear political tourists, we’ve had enough of you legitimizing the fraudulent election. You are trampling those democratic values that you yourselves have broken.

Mihran 2019-01-25 08:29:14
We had enough of fraudulent elections,3 presidents to date all crooks,the last one being very slippery,a liar,corrupt,and a friend of his crooked Oligarchs. The reason why the West and the Russians back corrupt Serzh is because they can each push their agenda on Armenia through corrupt Serzh,if Serzh does not toe the line stipulated by his foreign masters a lot of leaks will start to appear into the public domain all to do with his illegal activities,fraudulent elections, to his casino habits and loss,and the rest, as foreign governments namely US has a large dirty dossier on him just for this purpose. It suits the west not to have democratically elected presidents as they can push their dirty agenda much easier. The foreign so called observers have fulfilled their goal,this is the name of the game. Lena Nazaryan has pointed this out to everyone.A brave girl we need more like her.
Mihran 2019-01-25 08:29:14
Until corruption has been eradicated and the rule of law is firmly established in Armenia no amount of spin of words can persuade investors to invest in Armenia as there is no confidence or trust either by the Armenian public at large or foreign investors in this corrupt system.There has been many American Armenians who invested their hard earned millions in Armenia,not only they were fiddled by officials some also lost their lives with it,this is what your corrupt Armenia can do. Immigration of the Armenian people will continue until we all make an effort to clean our house from these thugs and crooks. Armenia will only be on the right track when the ruling power peacefully transfers power to the opposition,that's when Armenia can be judged as mature and moving forward and the rest of the problems can be sorted out in time,until than Armenia will sadly go downstream towards more and more people immigrating out to different shores. All these so called foreign observers are serving their masters in order to make serzh the president as its suits their dirty agenda to push through with corrupt serzh,its in the interest of the west and Russia to have him there as a weak and corrupt so called president as its much easier to take care of,or else his dirty dossier will be leaked to the public domain,this is the name of the game. This poor girl was trying to change this desperate situation in her own way.I salute her.
MK 2019-01-25 08:29:14
Under corrupt serzh Armenia sadly will be depopulated within no time,this is exactly what our enemies want,so keeping serzh is the best option for them,and the observers have fulfilled their dirty task. Lena was pointing this out,she did a service to our country,I am proud of you.
MK 2019-01-25 08:29:14
PFA Publishes Preliminary Analysis on Presidential Election in Armenia FULL REPORT with GRAPHS: http://www.pf-armenia.org/sites/default/files/Statement%20.pdf
Mihran 2019-01-25 08:29:14
Lena Nazaryan’s very impressive resume. http://www.linkedin.com/pub/lena-nazaryan/18/5a4/145
Harutik 2019-01-25 08:29:13
Lena jan, I suggest you stop your stupidity, get married and raise children and leave politics for the politicians. Armenia is unfortunately more democratic than your USA. And it's about time the OSCE did the right thing in Armenia LOL!
Robert Davidian 2019-01-25 08:29:13
Lena! You skillfully delivered the important message we all wanted to deliver to the OSCE! YES, they give a non-analysis while giving the elections in Armenia their APPROVAL! They EMBOLDEN the ruling criminals to cheat even more next time! This has the opposite effect on OSCE's own goal to promote democracy. And THAT is the biggest crime of all! SHAME ON THE OSCE!
Yervand 2019-01-25 08:29:13
Bravo Lena...Any society is as democratic as the people are interested and willing to make it. I would suggest to Harutik that if believes Armenia is more democratic than the USA he is living a fantasy. Armenia may not have the super-pacs and lobbyists as in the States but the regime has all the levers and scams to remain in power. I'm not saying that the electoral process in the States is perfect, but for hell sure, neither is it democratic here in Armenia. Don't tell us your version of the truth - it's far from it.
Վարազ Սյունի (Ամստերդամ) 2019-01-25 08:29:13
Ապրես:Շատ ճիշտ ես արել: ԿԱՐԵՎՈՐԸ ձեր/ՀՀ քաղաքացիների կարծիքն է,այլ ոչ մի քանի «անկախ» օտարների կարծիքը,որոնք 2 օր հետո վերադառնալու են իրենց երկրները:
Armen 2019-01-25 08:29:13
Thanks to Lena and all her co-conspirators for organizing this coup and for speaking truth to power! This took some serious guts. There are hundreds if not thousands like Lena in Armenia today. The future is theirs. The future is now!
Anush Tserunyan 2019-01-25 08:29:13
Bravo Lena jan and thank you so much!!! I'm proud to know you!
Dro 2019-01-25 08:29:13
Below statistics prove 100% that the election was rigged via ballot stuffing, double/triple voting and votes on behalf of those not in the country. Voter names must be publicized in order to prevent the 500,000 fraudulent vote advantage of the ruling regime. analysis on election results posted on elections.am: By filtering voting station with normal attendance rate (60% Raffi K. Hovhannisyan 191,194 votes Serj Sargsyan 536,194 votes