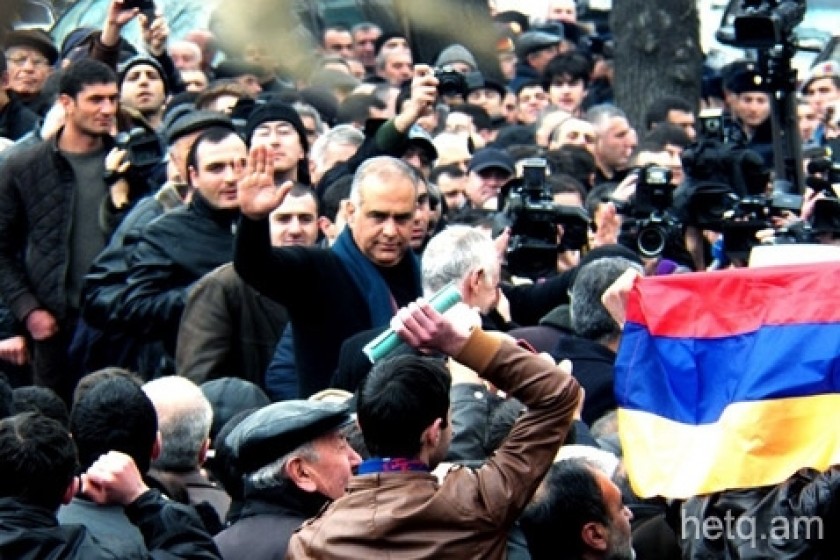 It is not the first time that the Police of the Republic of Armenia have reminded Mr. Raffi Hovhannisyan and the participants of the meetings organized by him that in all states, including Armenia, there is not and cannot exist a right to conduct meetings which demand a preliminary notice addressed to relevant bodies without any notice, to gather in preferable places, give instructions to the police officers not having that power. Unfortunately, these warnings were not apprehended by their addressees.

It is several years that the police have taken all the possible efforts to provide the complete freedom of meetings within the scope of the Constitution and laws, as well as to make the atmosphere of peace and interaction take roots between the participants of meetings and police officers. Such an atmosphere is urgent not only for the police or for the authorities, but just for the society because it provides security and stability which are urgent for the development of peaceful and safe life.

On February 23, presidential candidate of the Republic of Armenia Raffi Hovhannisyan conducted meetings in Ashtarak, Aparan, Spita, Vanadzor and Gyumri cities without a preliminary notice.

Thepolice of the Republic of Armenia emphasize that illegal meetings can lead to an uncontrollable situation, exploitation of rights, various offences when it becomes impossible to provide the natural and peaceful course of the meetings.

Taking into the account the fact that the meeting organized by Raffi Hovhannisyan directly conflict with freedom of meetings, The police of the Republic of Armenia in order to avoid unallowable developments find it necessary to inform Raffi Hovhannisyan the methodology of controlling masses, taking into the account that illegal meetings, calls not to obey law enforcement authorities and instructions, other illegalities during the meetings can be n incitement to a variety of other illegalities and lead to irreversible consequences, depriving the police of the possibility to provide the peaceful course and public order during the meetings.

So the police of the Republic of Armenia express their readiness to discuss the abovementioned issues with Raffi Hovhannisyan and his allies, informing them about the possible consequences of such actions.

The Police of RoA

GB 2019-01-25 08:29:13
The Armenia's Police chief has nothing to do with politics! He is paid, in order to serve and protect Armenian citizens. Apparently the oligarchy politicians looking for, trouble politically, for Rafi, therefor police is an excellent tool to cover up their corruption in Armenia!!