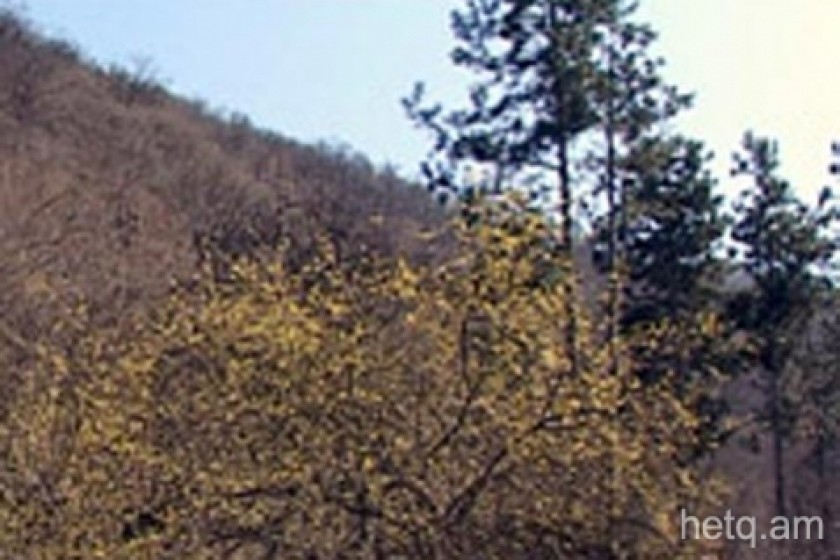 On November 3, the Vallex Group officially announced the beginning of its construction of a copper and molybdenum mine in the village of Teghut. Prime Minister Serzh Sargsyan was present at the ceremony, and nothing was spared to make it an impressive event.

The brass band, the voice on the loudspeaker declaring the importance of operating this mine, the festive long tables with barbecue smoke emanating from the other side and the concert with all the big names in Armenian show business all seemed to be designed to impress the people of Teghut into thinking that once the mine is exploited life here “would be happy and carefree.”

A church ceremony blessing the enterprise was performed. The statue of a bull by sculptor Ketik Baghdasaryan was unveiled. The sculptor presented his work as a symbol for power, strength and perpetual motion. The black bull was, however, also a symbol of something else. The bull is also a symbol of merciless and cruel power. Time will only show how this bull of Vallex’s will destroy the environment here.

The people of Teghut speak of the opening of the mine as the start of a bright future. The Teghut community head, Harutyun Meliksetyan, was unaware of the environmental problems linked to the mine, as were the rest of his fellow villagers. He had no idea that the open mine would result in gas emissions besides the dust released into the air. “I don’t think there will be any gas here - what gas are you talking about? This isn’t a smelting unit, so there will be no gas emissions,” he argued. The community head expected an increase in the community budget and an improvement in living standards as a result of the mine exploitation.

“It’s true, some environmental problems may come up, but our community will do its best to keep these down to a minimum,” said Meliksetyan. He had his own ideas about how they would go about doing this, “The company has myriad issues to sort out with us. None of those issues will be resolved unless we get our way.” The community head did not know how much income to expect into the budget from the mine but he was certain that soon one of the richest communities in Armenia would be Teghut, followed by Shnogh.

The perception of the head of Teghut regarding the mass destruction of the forests around his village are laughable, “Yes, we know that deforestation is a huge problem and that it has multiplied one hundred-fold over the past fifteen years in Armenia and has not brought any benefit to the country,” explained Harutyun Meliksetyan.

Karlen Babayan, principal of the school in Teghut, said that one should first be able to live in the natural conditions surrounding Teghut and then think about creating there. “You know, we had parks which then dried up after the Soviet collapse when the village was neglected. Now this gigantic company can lend a helping hand,” said Babayan.

The government also has big expectations from the exploitation of this mine. The mine has reserves of 400 million tons of ore, the extraction of which could bring Armenia 100 million dollars annually. In an interview with reporters, Prime Minister Serzh Sargsyan spoke of the economic significance of the Teghut mine saying, ”Teghut is one of the biggest economic programs of Armenia, with around $300 million of investment. The exploitation of the mine would lead to growth in the gross domestic product of about 1-1.5%. During the first stage alone, 2,000 new jobs would be created.” According to the Prime Minister, that would be enough to solve the unemployment issue in Northern Armenia. Surprisingly enough, the company planned the creation of only 1,280 jobs in the first stage of its program, while Lori Governor Aram Kocharyan spoke of 1,700 jobs in his speeches and the Prime Minister put the figure at 2,000 new jobs.

The Prime Minister replied to questions about environmental issues linked to the mine, saying that it all depended on the owners and how well everything was run. He said that there was nothing to worry about, since a government decree had set the rules of the game. The exploitation of the Teghut mine is now a reality. It is clear that operating the mine at Teghut will be destructive, and that damage to the environment may be equivalent to about 2,078 billion drams, which does not include an estimate of the damage to people’s health.

Lori Governor Aram Kocharyan had the following to say in his festive speech, “…the thought that exploiting the mine will lead to environmental problems will soon be vanquished.” Governor Kocharyan was convinced that the company management would fulfill their program obligations regarding the solution of environmental problems. We are forced to remind Kocharyan that the Alaverdi copper-smelting unit owned by Vallex Group released 26.7 thousand tons of sulfur anhydride in 2006 alone, although the standard maximum is 1.18 thousand tons.

In 2006, the Ministry for Environmental Protection temporarily permitted the company to release 15.6 thousand tons of sulfur anhydride. That decision also required them to pay large fines which would be used to buy equipment that could reduce the amount of harmful emissions in the air around the city. This period of permission ends in late 2008, but nothing has been done so far to supervise the situation, neither by the provincial head - the representative of the government at this level - nor by the public. Since the investor’s obligations towards the environment have been left without supervision, they will never be fulfilled.

“The one responsible for the supervision of environmental issues,” according to Inga Zarafyan, president of the NGO Ecolur, “is the state. We have a specific structure, the Ministry for Environmental Protection, which should deal with legislature regarding the Teghut mines. The Ministry did not act professionally in the case of these mines, as result of which we don’t have normal mechanisms to supervise the exploitation of the mine. This begs the question - who will conduct these environmental programs? When we talk to people at the environmental department we are always told that they don’t have enough staff members - how can they possibly supervise anything?”