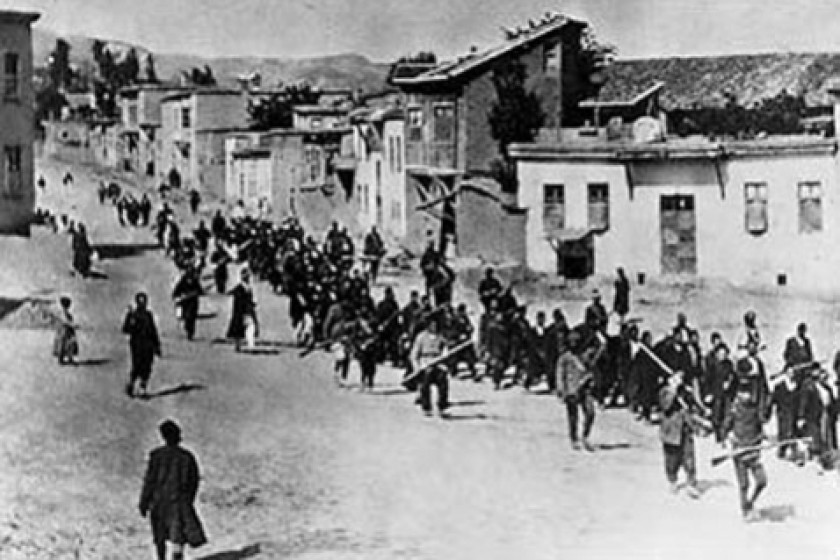 Remember, Remind, and Reclaim: Guidelines for the Genocide Centennial

Armenian communities around the world are gearing up for the Centennial of the Genocide on April 24, 2015, by coordinating their commemorative plans at the local, regional, and international levels.

A Pan-Armenian Centennial Committee was established in Armenia two years ago consisting of the leadership of the Republics of Armenia and Artsakh (Karabagh), heads of religious denominations, and representatives of major Armenian political, charitable, and cultural organizations. Local committees have also been formed throughout the Diaspora. As reported earlier, the international committee of Armenian Genocide experts met in Yerevan last month to recommend specific projects to be adopted by the Pan-Armenian Centennial Committee during its May 30 meeting.

On April 6, the Centennial Committees of eight Middle Eastern countries (Cyprus, Egypt, Iraq, Kuwait, Lebanon, Syria, the United Arab Emirates, and Iran represented by committees in Tehran, Esfahan, and Tabriz,) met in Beirut to coordinate their plans on a regional basis. Also attending was Hayk Demoyan, Secretary of the Pan-Armenian Centennial Committee in Armenia.

His Holiness Aram I, Catholicos of Cilicia, presided over the meeting and gave a timely keynote address outlining the principles that should guide the regional committees in planning for the Centennial. Aram Vehapar succinctly formulated the objectives in three key Armenian words: "Hishel, Hishetsnel, yev Bahanchel" [To Remember, To Remind, and To Reclaim].

His Holiness went on to explain: "for 100 years, we stressed the remembrance of the Genocide. We lit candles, organized commemorative evenings, and published books. These important activities will imbue our youth with the sacred testament and souls of our martyrs. Yet, we should not singly focus on this subject. For 100 years, we reminded people through demonstrations, lobbying, and raising our voices. We aim to continue these activities with different approaches. However, it is imperative that we stress our demands for restitution."

Aram I went on to suggest a division of labor between the Republic of Armenia and the Diaspora: "We should work in unison. Our approaches and emphasis could be different from one another; and sometimes they must be different! Let's not forget that Armenia is a state, and the Diaspora is a diaspora. Neither the state nor the diaspora can speak on each other’s behalf. Each has its own unique voice and function. But, there should be intra-Armenian harmony and coordination. In other words, we should plan and work with a common purpose, holding on firmly to our demands for restitution."

The Catholicos then urged Armenians to include the far-flung regions of Africa, the Far East, and South America within the scope of the Centennial activities. Turning to the Middle East, Aram I made three important points:

1) The pursuit of the Armenian Cause in the Islamic world requires a special approach, because Turkey is a Muslim state.

2) Turkey's ever-increasing and penetrating influence in the region is a serious problem. "In my meetings with leaders of countries in the region, I always tell them: 'you have kept your doors very wide open in front of Turkey. The day will come when you will recognize your mistake. Turkey uses different masks.' Therefore, we must be alert as the genocidaire is closely following our steps. We will not retreat and will not weaken in the face of Turkish meddling."

3) Genocide is not an event that belongs to the past. The Diaspora is a consequence of the Genocide, and in a sense, it is still continuing.

Catholicos Aram I concluded by categorizing the Armenian efforts for recognition and restitution into three dimensions: historical, political, and legal. "The time has come, without ignoring the first two, to place a clear priority on the legal aspect. In this regard, we have a massive amount of work to accomplish," he stated.

Significantly, Hayk Demoyan, Secretary of the Pan-Armenian Centennial Committee, also speaking at the regional meeting in Beirut, noted: "We know that we cannot undo some of the consequences of the Armenian Genocide, such as the lost lives and destroyed churches, nevertheless, the major consequence is the loss of the territories!"

Rose 2019-01-25 08:29:21
This is an incredibly painful process for all Armenians and rapidly becoming like a joke because Jews had their recognition with a court order just after couple months after the holocaust but it has passed 100 years since 1915 and we still have no court order not even a rational attempt to solve the problem through an independent international legal procedure as it was supposed to be!