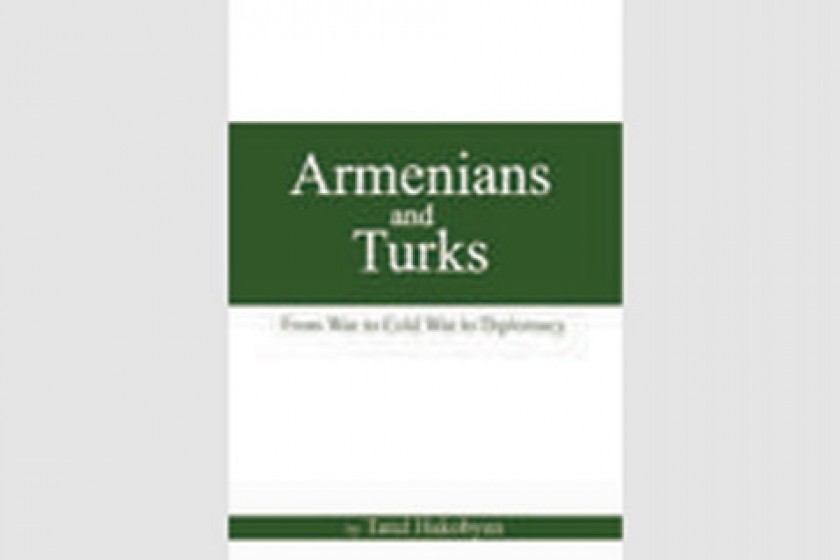 "Armenians and Turks" was published in English

An English translation of 400 plus-page book by reporter and expert Tatul Hakobyan Armenians and Turks; from War to Cold War to Diplomacy was published in Yerevan in April, 2013. This work, which covers Armenian-Turkish relations since 1918 to football diplomacy, is the result of eight years of extensive research, analysis and travel by the author, who is an expert with Civilitas Foundation in Yerevan and correspondent of several Armenian outlets in Armenia and Diaspora.

The editor if the English version is Nareg Seferian.

Tatul Hakobyan,s first book-  Karabakh Diary, Green and Black, first was published in 2008 and since then has had 8 editions including English, Russian, German, Turkish, and Arabic.

Tatul Hakobyan is currently working on a new book about Armenia’s domestic and foreign policy from the beginnings of its journey towards independence in 1988 to the current day.

According to Raffi K. Hovannisian, Armenia’s Foreign Minister (1991-1992), Hakobyan’s new book, “is packed with political insight, historical revelation, and even a poetic vision of a complicated relationship which unfolded, over a century, between two peoples.” Hakobyan has established himself “as an indispensable journalist, expert, and scholar of this ongoing saga. It is my hope that his ground-braking work will help achieve recognition of the historical record and a reconciliation based on the terrible truth,” wrote Hovannisian.

Alexander Arzumanyan, Armenia’s Foreign Minister in 1996-1998, wrote; “This volume is in fact a continuation of Tatul Hakobyan’s first book, Karabakh Diary: Green and Black. Written in the journalistic style using strict standards of scholarship, the author has evidently undertaken wide-ranging research. This book is of great interest not only to historians, diplomats, or experts who study issues of Armenian-Turkish relations and their impact on the future of the South Caucasus, but also for a wide range of readers.”

“Tatul Hakobyan’s work is a smooth mix of history and journalism. This extremely complex and significant period of history is presented coherently, simply, in an easy to follow narrative that links together the various periods during the tumultuous 100 years beginning in 1918. The book is especially valuable because of Hakobyan’s special focus on Armenia-Turkey relations during the Cold War years and new information he has brought to light as a result of diligent research in Armenia's archives,” said Vartan Oskanian, Armenia’s Foreign Minister in 1998-2008.

According to Ara Sanjian, Director of Armenian Research Center in University of Michigan-Dearborn, “Hakobyan’s investigative work is the first-ever attempt to shed comprehensive light from Armenia’s perspective on the trajectory of the latter’s thorny relations with its neighbor, Turkey, since the era of Mikhail Gorbachev’s perestroika and Armenia regaining its sovereignty and independence in 1991. This study is based not only on the author’s own observations during his career as a journalist, a wide range of printed sources, but also in-depth interviews with over a dozen leading Armenian policymakers, including the country’s first post-Soviet, democratically-elected president and its first four Ministers of Foreign Affairs in the period of independence.”

“In his new book Hakobyan is continuing to place current affairs in its larger historic context. After Karabakh Diary, Green and Black he has produced a new, and impressive book looking at the current state of Armenian-Turkish relations through a historic tour de force revisiting the roots of the current blockage. He is one of the leading example of a new generation of scholars in Armenia applying meticulous research and sharp observation. A much needed voice from the other side of Ararat,” said Vicken Cheterian, political analyst and  author in Geneva.

“This book covers almost the whole spectrum of Armenian-Turkish relations, including the different attitudes of Diasporan circles and masses to the past, present, and future relations with the Turks. Hakobyan investigates this difficult and very complex historical and political matter – far from understanding it as a mere Republic of Armenia - Republic of Turkey bilateral problem, but as an issue of the Armenian and Turkish peoples’ mostly antagonistic relationship. A book that is very useful for Armenian diplomacy, Armenian historiography, and Turkology,” wrote historian Gevorg Yazichyan.