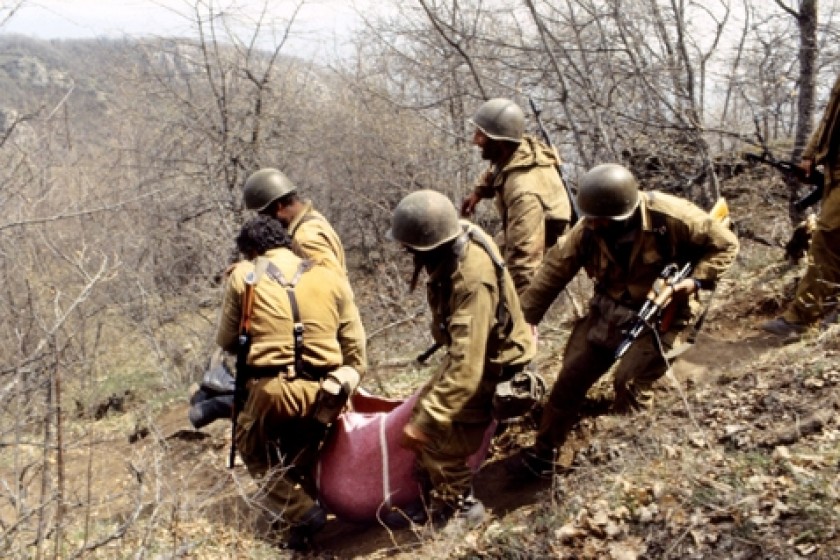 What a correct distribution of roles and what an assembly of talented actors had gathered in Yerevan. Where did all this polished mastery come from? And the rest of us, as per the norm, were in our assigned roles.

I had returned from Karabakh the day before, and hadn’t yet got my head on straight, before finding myself on the “attractive” election stage in Yerevan.

During the day, numerous “masterful” actors had appeared in, and especially outside, the various polling stations throughout Yerevan.

There were men, women and of course boys engaged in their “work”. They all looked and sounded alike. And, of course, his holiness MP Samvel Aleksanyan, was widely covered in the news programs.

One day, this petty political figure will surely win an Oscar. He is able to assume any role at any time and play it with distinction. And he always performs for free.

But throughout it all, parallels with the Artsakh War were swimming in my head.

They had recently kicked out a 38 year-old man from the army. After leaving high school, he joined the army. He knows no other life. At first he served in a volunteer unit and then joined up with the regular army once it was established. He served for the past 18 years.

He fought in many battles and was injured. His last two posts were with the Yeghnik brigade (8 years) and in Shushi (2 years). He was serving in Shushi as an NCO when they kicked him out.

The army had sent him to Yerevan for two months worth of training. He asked his superiors for a one day leave to repair the leaking roof on his house. They refused. He was in Karabakh on Sunday and returned to Yerevan on Monday. That’s when they decided to kick him out of the army. The man lives alone. He never got around to marrying. His father passed away a few months ago.

The father had been seriously ill. The soldier had requested to be posted nearby to take care of his ailing father. They agreed and posted him to Shushi. Then they told him to “get lost”.

The soldier wrote to RA Defense Minister Seyran Ohanyan. He described what had happened and requested that he be reinstated. He’s still waiting for a reply.

Yesterday, I did some digging into the military institute located in the Jrvezh district of Yerevan where the soldier had been attending classes. I heard many stories about how exams are given and the conditions on which vacation time is afforded without being cut from classes.

One of the NCOs attending the two month training course told me that he had been forced to purchase concert tickets on two separate occasions.

Karabakh’s defense minister immediately signed the papers from Yerevan advising that the man be discharged from the army.

I’ve been thinking about this guy for the past few days. In tones of despair he told me, “What will I do now? I have no work and cannot do anything else. They won’t even give me a pension.” He had two years left to qualify for one.

I cannot for the life of me understand how the army could treat someone like this; a man who devoted his life to the army. They tossed him aside like a piece of refuse.

The man told me he has just two options – to leave Karabakh or to commit suicide.

In my home village of Karin Tag, there once was an officer, a senior lieutenant, of slight physical stature.  At the age of 16 he joined a volunteer unit and later the regular army.

During a 1996 event in Khojalu, General Khachatryan insulted the officers with a sexual expletive. That slightly built officer couldn’t swallow the insult directed against his mother and struck the general.

They kicked him out of the army. I had expected something worse at the time. Praise God that the officer made it out alive.

Now he is a father of four who works as a common labourer to keep the family afloat.

I’m sometimes asked if people will get up and go to the frontlines to defend the country if war breaks out again.

I tell them yes, people will again go to fight.

And do you know who will be on the frontlines?

These two men whom I have spoken about...the ones they have kicked out of the army.