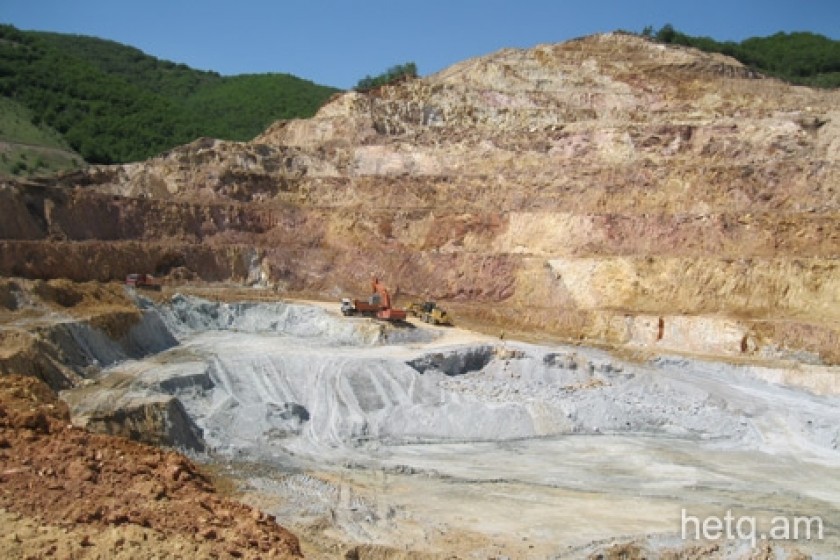 Base Metals Launches Second Mine in Artsakh; An Open-Pit Operation

Base Metals CJSC, a subsidiary of the Vallex Group of Companies, operates two mines in Artsakh

The Drmbon copper mine, an underground operation, was launched in 2002. It annually produces 350,000 tons of ore per year. Artour Mkrtoumyan, General Director of Base Metals, says that the mine has reserves for another two or two and a half years only.

The other mine, this time an open-pit operation, is located in Kashen. It was launched in May of this year and is located some forty kilometres from Drmbon. The mine has copper and molybdenum reserves.

Mkrtoumyan says that the mine poses no real threat to the surrounding area and that a 500 meter sanitary zone surrounds the open pit. Seven families that resided in the area have been relocated to the village of Vardadzor, on land allocated to the company.

Mkrtoumyan adds that the company plans to build them homes costing 50 -55 million AMD.

Over the eleven year operation of Drmbon, some four million tons of waste have collected in the two tailings dams. One year ago, a third tailings dam was built on 14 hectares of land that has a special membrane manufactured in Germany covering the bottom.

The plan is to recycle the wastes of the first two dams in a new factory being built to siphon off a substantial number of gold particles that remain in the wastes. After the recycling, the final waste matter will be permanently stored in the new tailings dam.

When I noted that local environmentalists have sounded the alarm regarding the risks associated with such waste transfers, Mkrtoumyan responded that he didn’t foresee any risks since the wastes are chemically treated and transferred via special pumps.

As to how much forested land had to be cut down to make way for the Kashen mine, Mkrtoumyan said that a mere 3-4 hectares had been felled. In the case of Drmbon, the number was 20-30 hectares.

He added that two new mining companies have appeared in Artsakh and that one will begin operations by the end of the year.

As to the added environmental damage that will result from increased mining in Artsakh. Mkrtoumyan said that there are ample environmental NGOs on the ground to monitor future developments.