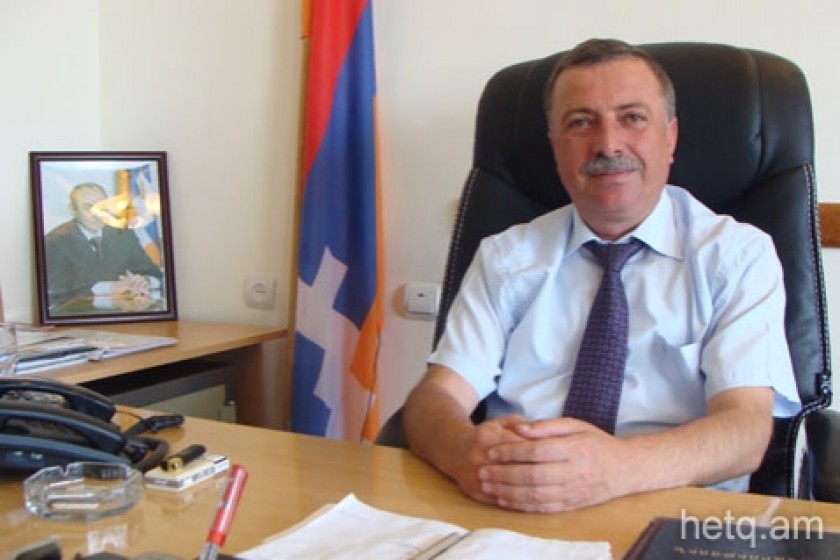 Kashatagh Governor: "29 Syrian-Armenian families live here now and another 40 are on a wait list"

This reporter was recently in Artsakh and spoke to Souren Khachatryan, Governor of the Kashatagh Administrative District.

Mr. Khachatryan, how is the resettlement project going in Kashatagh?

I can only speak about the last three years since I became administrator of the district. Prior to my coming on board the district had a population of some 8,000. Today, we have 10,000. So far this year, 43 families have moved her. That translates into 144 individuals. Seven families, 22 individuals, have left. This is only natural. People leave because they got a better job somewhere else or for family reasons.

Where do you resettle the newcomers; in the towns or villages, or in Berdzor the district capital?

We’re focusing on resettling people in the south. The government allocates building materials donated by various benefactors. We want the newcomers to settle down and work, and we are doing what we can to facilitate this.

How many Syrian Armenian families reside in Kashatagh?

Currently, there are 29 families living here and another 40 families are on our waiting list. But we have no place to put them right now. Five of the families stay in our guest house. The Assist Your Brother organization has funded the construction of a twelve apartment house in Kovsakan. It will be finished next month. We are also finishing a nine apartment house in Ishkhanadzor with funds from the Kashatagh Benevolent Fund.

Has the government found work for these Syrian Armenians?

We have done our best to find them jobs in the public sector and with various organizations. Our goal is to have each family earning at least 40-50,000 AMD to cover the basics. Indeed, a few of the locals have complained that these newcomers are getting preferential treatment, but the majority understand they are our brothers and sisters and need our help.

Will most Syrian Armenians stay permanently or are they just temporary residents?

I really can’t say for sure. Some will definitely stay, but what the rest will do if peace returns to Syria is something I can’t predict. We can’t keep them here against their will but, as I’ve said, we are doing what we can to make the move easier.

What’s the job situation like in Kashatagh? What skills are in demand here?

We’re forthcoming with people looking for jobs here. If someone drives a tractor or is a mechanic, we tell that person to go south and get involved in the agricultural sector. We tell others that animal husbandry and bee-keeping are jobs up north. Berdzor only offers public sector jobs and there are long waiting lists for those. Because of this, we want to get people resettled out in the countryside, working the land.

We need teachers and medical professionals in the villages. There’s a surplus in the towns. But life in a village isn’t easy, especially for someone from town. They want hot and cold running water round the clock. That’s not the reality.

It’s five billion AMD. This includes various assistance packages for large families and relatives of those who died in the war. Some 150 million goes towards the distribution of building materials.

How much of the land is currently being cultivated?

Today, around 20,000 hectares is farmed. Most of the crop, wheat, barley and corn, s sold over the border in Syunik. There are vast expanses of good land on the banks of the Arax not being fared.