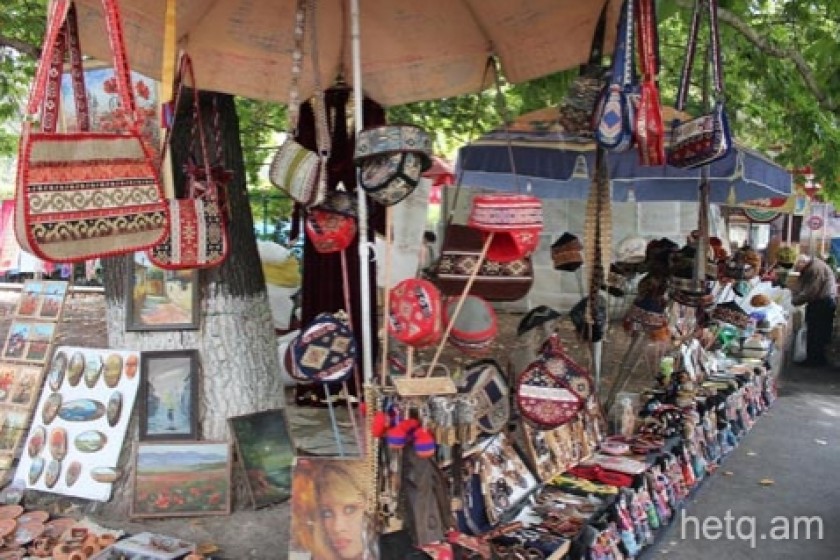 One Day in Yerevan

A dark, but colorful Vernisaj.

The Vernisaj Market is that tiny part of the heart of Yerevan where you can find a collection of books, gifts silver and Armenian souvenirs.

Here is where I meet the prose writer Levon Djavakhyan. Explaining what goes on at the market, he says: “Vernisaj was mainly set up during Armenia’s years of transition, when people were forced to bring their belongings and sell them at accessible prices to make a living.”

Melik, who sells hats and paintings, welcomes all with a smile and dispels the idea that Yerevan residents are a sullen lot who don’t know how to smile. Melik isn’t disappointed with the business he does and praises his wife. “I am very thankful to the people from the Diaspora. They are very pleasant. They come and make their purchases. We are very happy,” he exclaims when shaking my hand. He then adds a loud “Love live our nation”.

Before visiting Melik, I passed by a few booksellers. They all refused to answer my questions and to be photographed.

There is a section devoted to booksellers on the one end of Vernisaj where Edik (a Yerevan resident of around 65) is selling a copy of Gostan Zarian’s “The Ship on a Mountain” for 1,000 AMD. Here, you can mostly find works published by HayBetHrat on sale for decent prices. You’ll find volumes by Terian, Charents, Shiraz, Sahian and especially Sevak lined up in neat rows.

Edik says these are the works that people look for the most. Unlike Melik, Edik isn’t happy with the way his business is going, and tells me that he pays 10,000 AMD ($25) every two days for his stall spot. At the end of our conversation, he forgets his complaining, and wishes us all well. “The most cherished thing is life is your health.”

My next stop is a stall run by the 70 year-old woman selling hats, army clothes, shoes and other items. She refuses to talk to me and somewhat angrily warns me not to photograph her. “I don’t want to say anything to you. I know nothing about this place,” she declares, adding, “Go talk to the boss.”

There is such a class of people in Armenia. These people getting by on 30-40,000 AMD (the average monthly pension in Armenia, must become worthy of our attention and care. It just isn’t tolerable that 22 years after independence Armenians face such daily problems of survival. With these people, patriotic exhortations fall on deaf ears. In these cases, you just hang your head and walk by.

It’s not surprising to also meet people who once were professionals in their fields and have now been relegated, through the exigencies of time, to selling books and other items at the market.

One of them is Babken, who didn’t want me to take his photo. Babken sells a variety of new and old books, especially art albums. “The general impression that people don’t read is incorrect,” he says, adding that people from all over the world make a beeline to Vernisaj to buy books at highly competitive prices. Babken then tries to convince me that he doesn’t like to give interviews, even though he highly respects the Diaspora and appreciates the role Diaspora Armenians play.

The next man I meet is roaming the market looking for a bargain.

“The Vernisaj prices are quite low. Our people live poorly and can’t afford expensive stuff. Here, the prices fit our budget, he says. Turning to the Diaspora, he expresses the hope that ties between Armenia and the Diaspora grow stronger.

“We lose out and so does the Diaspora. I regret the fact that there are so many intelligent people in the Diaspora, successful people, but there is no organization or leader that can unite us all.” The man doesn’t want to give his name. Smiling, he adds, “is my name so important. Just say it’s an average Armenian, an average Yerevan resident.”

In this part of Yerevan it easy to spot foreign tourists. One is Pierre from Belgium, who has come to Armenia with his Armenian girlfriend. He tells me it’s his second trip and that he comes to buy old books. “You can find very rare books here. Just today, for example, I found a book on rug making written by Manya Ghazaryan.”

Kolya Andreasyan, who sells minutely detailed musical instruments, is the next person I talk to. “I made all this by hand,” he says. As I look over his work, he continues. “I’m not complaining but the business here is seasonal. Our business really picks up when the tourist arrive.”

It’s not easy talking with Levon Djavakhyan. He starts by asking what I’m writing about, and then complains, “My boy, how can you write about such a topic?” As I try to explain that I would like him to say a few words about Vernisaj, one of his friends chimes in and speaks his mind.

We all know that everyone in Yerevan seems to have an opinion on just about everything. In order to regain control of the situation, I pull Levon to one side and try to wring a few words out of him.

He says, “Life must be lived little by little. It’s not like drinking a glass of water in one gulp. I have just turned sixty and realize that you have to drink water by sipping it. I enjoy life the same way; little by little. People try to find happiness in life and have thousands of things to say about this. They search for happiness within happiness. If you set goals for yourself and try to achieve something, that itself is happiness. Life is all about resolving problems. If you write, you are setting down a series of issues. If you live and see a ceiling in front of you that you’d like to reach, that too is a miracle. One must live before dying and a writer, a good one, lives until immortality, and only after does he die. That isn’t happiness but paradise.”

Djavakhyan, who sells silver crosses, chains, rings and earrings, is one of those who didn’t stay cooped up at home during the years of transition, lazily boasting that he was a writer and that the nation was obliged to take care of him. Instead, he struggled to maintain his dignity.

The first drops or rain began to fall, wetting the pavement of Northern Boulevard as I walked its expansive length. I sat down at my favorite spot and began to write. My keyboard wasn’t angry; there was no ire hidden beneath my words and sentences. There was no political message or superfluous angst. Just a search for love in a city destined to be ours. You must snatch the first and last words of love from its residents, from its blackened and rain soaked faces, from the mouths of the people who call it home, struggling with the tribulations of surviving in it.

Sure, there are people here who barely get by from day to day.

Sure, there are people here who poverty and pain belongs to us all.

At first glance, this city is crude, Caucasian, with a pronounced unappealing streak. But, deep within, it is different.

It is important to enter its depths. There are great reserves of love to be found there.
One must knock on the door and enter inside.

After a tiring day, sweaty, burdened with all the emotions of longing and having a morsel to eat, when you turn the key in the door of your house…

Yerevan is inside you.

Inside are friends and family.

Inside is your world.

With all it possesses; its history, struggle, its emigrant past, quests, and most importantly, its word.

Its sidewalks wet…different and colorful words on its sidewalks. And especially great dreamers ready to greet winter with a cup of tea.

This is how I spent my one day in Yerevan.