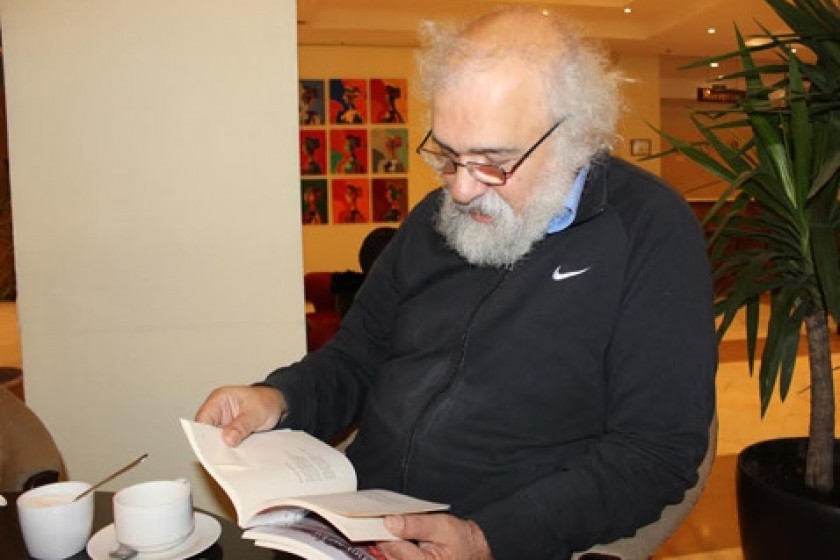 Ragıp Zarakolu: "The culture of Anatolia belongs to us all"

The name Ragıp Zarakolu first echoed throughout in 1971, when he was jailed for “secretly” collaborating with Amnesty International. He spent five months in jail before the charges were dropped. Not surprisingly, the crucifixion of this human rights defender continued and one year later Zarakolu received a two year sentence for an article he published in the newspaper ANT (Pledge) on Ho Chi Minh and the Vietnam War.

The pages of Zarakolu’s biography is written in similar form, jumping from one prison cell to another and taking center stage in a variety of social activism platforms.1977 was a watershed year in Zarakolu’s life, for it was then that he and wife Ayşenur established the Belge Publishing House in Istanbul. Belge continues to speak truth to power by publishing numerous tracts and books on the Armenian Genocide.

Recently, I met up with Zarakolu when he visited .

Mr. Zarakolu, why have you come to ? I believe it isn’t your first visit to .

No, this is my sixth visit. And it’s quite important because it marks the launch of the Turkish translation of Verjine Svazlian’s The Armenian Genocide: Testimonies of the Eyewitness Survivors that was published by Belge. The book runs to over one thousand pages. It’s Svazlian’s life work and has already been translated into Armenian.

So, what are your impressions of this time?

Coming from , I would say that is a very unique city for me. is like a second homeland for me. The third is , because my compatriots from are spread throughout and .

What motivated you all those years ago to start writing and speaking about Armenian issues?

To be honest, when I began to research matters related to the nature, essence and origins of the Turkish state, I also started to write about Armenian issues. It’s only natural that if you are to study the history of , you must take into account Armenian issues as well. When you attempt to ponder and examine matters related to human rights, you can’t escape the Armenian reality.

When did you start to dig deeper into these issues?

My interest really took off ever since the 1990s. It was a period when discussions on Armenian topics began to increase. We must also not forget that debates on the Kurdish question and Kurdish-related developments also helped to foster a public sentiment whose main interest focused on Armenian issues. It was also during those years when we started to struggle against the denial of the Armenian Genocide.

Any such denial was simply very dangerous for our society. I say dangerous, because denial would have opened the door for new genocides or killings. In reality, it was the fear of repeat killings that forced a tiny segment of Turkish society to publicly speak about the problems of Armenians and Kurds.

Mr. Zarakolu, during the past few years has taken on a more active role regarding diaspora-Armenian forums. Such a thing was impossible to imagine twenty or even ten years ago. It was problematic for Armenians to even visit . For many it was a taboo subject.

I understand. Let’s accept that many things have since changed; overall in and especially in . And it’s been the people who have forced the authorities to make visible and important changes in the country. Organizations defending human rights have worked more publicly, forcing the government to make these changes.

We must understand that today’s authorities aren’t the same as the Kemalists. The path they have adopted is different from their predecessors. Today’s rulers also have a nationalistic streak, but the issue of religion remains paramount for them. They too have been persecuted, and for this reason certain changes can be achieved with them. Now, it is possible to openly talk about the Genocide and issues related to the Armenians, Kurds and other minorities. True, the situation isn’t ideal, but we and others devoted to human rights issues continue to fervently struggle.

How would you evaluate the current state of Armenia-Turkey relations?

Clearly, the arena of Armenia-Turkey relations today is centered within the scope of economic cooperation. And I regard this as very important. This, despite the fact that today, just as yesterday, government representatives still make extremists statements.

Why is this so?

It explains why Pan-Turkism is so important to them and why such sentiments are so deeply shared by Turkish authorities. As regards the overall situation in the Caucasus, we must clearly see that the Russians have large and important connections to and . This factor helps prevent war in the region. We also know that regional peace remains unfulfilled given the Karabakh conflict. I should also note that is attempting to mimic the role of . That’s to say that is trying to come across as a superpower in the region. But, I believe will not succeed in this regard.

What would you say regarding the statements being made by directed at about settling its outstanding issues with ? For isn’t it true that has placed such a precondition for normalizing its relations with ?

I would say that we should ask those same Turkish officials about what happened regarding . What is their position on this issue? If the settlement of the Karabakh conflict is so important to , then it should adopt the same stance that it has regarding . In other words, if portrays itself as a defender of self-determination in , then it is obliged to do the same regarding Karabakh. We must constantly raise these questions to the Turkish authorities.

One year ago, while I interviewed the actress Sona Tatoyan in , an issue arose over the term . Many readers of the interview were put off by the word . What do you have to say regarding the characterization of the term?

is a cradle of cultures. That region is an important center for Armenians, Greeks, Turks and Kurds. It’s a center of civilization. The Kurds also detest the term , and call the region Bet Nahrain (land of two rivers). With the destruction of Assyrians in , the expanse of Kurdish lands increased.

There have been great geographical changes in this region, particularly during the days of World War I and as a consequence of the policies of the Turkish authorities. I must also note that the culture of possesses something that connects all of us – it’s the strength of the culture that grew and spread on those lands. It’s this strength that Armenians and Kurds, Turks and Greeks, spread throughout the world. Thus, belongs to all of us. It’s a mosaic that many have created. That heritage belongs to all.

The 100th anniversary of the Armenian Genocide is fast upon us. What are your thoughts on the matter, especially given that those Turks who accept the historical reality of the Genocide are also gearing up for the occasion?

Let me start by saying that due to a policy of denial there was no real information on the issue until recently in . Of course, much work has been done to fill in the gaps. The work presented to society at large has greatly assisted people to separate the truth from falsehood. Non-extremist Turks started to get interested in the issue and see the reality. This reality helped them not only to be content with emotional pronouncements, but to also launch important steps towards the recognition of the Genocide.

There are walls between us. This is no secret. But dialogue is important to tear down these walls. I know that it’s easier to build walls, rather than tear them down. has a major role to play in tearing down these walls. To date, Turks have pretended to be blind and mute. But the time has come for us to accept the existence of western Armenians and the Armenian diaspora. To start with, must consider how it should relate with its Armenian citizens.

Yes, and can initiate relations and that is a natural part of government policy. But such relations cannot resolve all outstanding problems. The paramount problem exists between the Turkish state and the Armenian diaspora. And , if it aspires to become a powerful state, is obliged to first clean-up its past. Without coming to grips with its past, will never become a well-grounded or strong state.