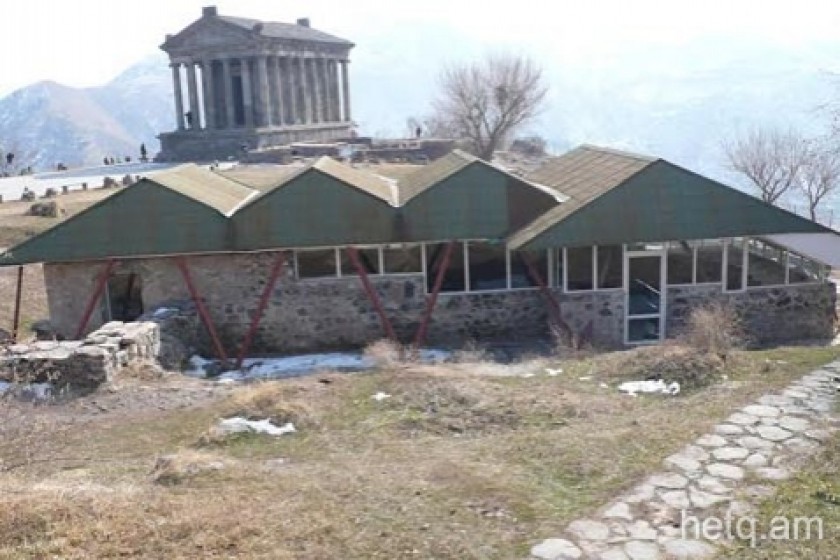 Armenia’s 1st century pagan temple of Garni, one of the main cultural sites in the country and a top site for tourists, has fallen on hard times.

After being sacked by Timur Lenk in 1386 and destroyed by an earthquake in 1679, it was miraculously reconstructed in the early 1970s.

Today, the Garni Historical and Cultural Museum Reserve (that includes the Hellenistic-style temple, a bath complex, a royal summer palace, and a 9th c. church and cemetery) can only be considered a sore spot in the country’s stated drive to promote tourism.

The mosaic in the bathhouse, depicting Greek mythological figures, is damaged. The walls of adjacent buildings are crumbling. The road leading to the temple itself is in disrepair.

Occupying 3.5 hectares, the reserve is supervised by the “Service for the Protection of Historical Environment and Cultural Museum Reservations, NCSO” (non-commercial state organization) attached to the Ministry of Culture.

Sadly, as far as Hetq has been able to ascertain, this body has drafted no action plan to remedy the situation at Garni. 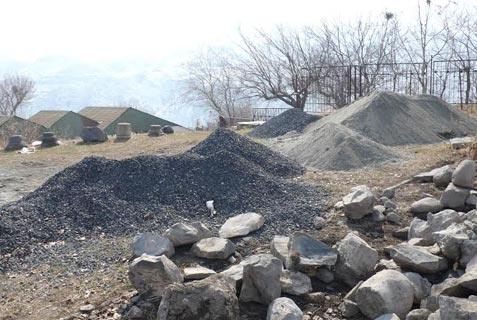 Three years ago the press in Armenia sounded the warning regarding the imminent destruction of the bathhouse mosaic due to the seepage of melting snow. To date, nothing has been done to protect it.

Vladimir Poghosyan, who heads the NCSO, told Hetq that a project to protect the mosaic must first be commissioned and then presented for review. Work to preserve the mosaic will only commence after the project is approved. Poghosyan never explained why his agency failed to take appropriate measures to save this unique piece of art in the preceding three years.

The basalt tiled road leading to the temple is in what can only be described as poor condition. On this point, Poghosyan is in agreement, noting that it presents an inconvenience for arriving tourists.

The solution he proposed however, will surely shock many readers.

There are plans for a café to be built at the site, and Poghosyan says that a potion of the revenues will fund improvements.

In my conversation with Poghosyan it appears that he regards the building of the café as the solution to all of Garni’s problems.

Readers might get the impression that a lack of adequate funding is the main culprit behind the problems facing Garni; that the ministry and Poghosyan’s agency haven’t taken steps to remedy the situation because they just don’t have the resources. But is this really the case?

Garni, along with the neighboring monastery of Geghard, top the list of tourist sites in Armenia. Tourist agencies I contacted verified this. According to statistics published by Poghosyan’s agency, some 200,000 people visited the Garni complex in 2013. The revenue received (entrance fees, etc.) amounted to 86.472 million AMD (US $211,423).

While I would like to believe that 200,000 people actually visited Garni last year, when I compare this to official figures of tourists visiting Armenia, I have my doubts.

According to the Ministry of Economy, 677,906 tourists visited Armenia from January to September, 2013. The Yerevan-based AVC Group (a business auditing and consulting company) puts the number at 700,000. Even if these figures are somewhat inflated, the fact that Garni is a must see on the tourist itinerary, leads me to believe that the revenues as stated by the NCSO are understated.

Nevertheless, 86.5 million isn’t chump change and it would be interesting to know just how much of it has been reinvested into improving the situation at Garni. First, let’s deduct the wages of the ten full-time employees (three of which are seasonal from May-September). An overly generous estimate would place the total wage expenditure at not more than 15million AMD annually. So where is the remaining 71.5 million going?

Replying to our inquiry, Vladimir Poghosyan said that the revenues of Garni and other reserves are managed as a combined resource. After the costs are counted (almost none of which relate to the Garni Reserve), the balance has been spent on a conference and publications to mark the NCSO’s 25 anniversary. Money has also been spent to procure three vehicles for regional historical environmental protection agencies, to provide social assistance to 180 agency employees, and 14 million was spent on various promotional programs.

None of the money has been spent to preserve the Symphony of Stones (towering cliff walls of well preserved basalt columns) in the nearby Garni Gorge. With the approval of the Ministry of Culture this natural wonder has been turned into a veritable stone quarry of late. It would take a pittance to collect the fallen stones and spruce up the area, but it seems that Poghosyan doesn’t see the need to ensure the safety of tourists so that they can reach the café he intends to build at Garni.

The last work to improve the Garni Reserve took place ten years ago, when the Lincy Foundation funded the partial restoration of the outer walls, with two towers, and the installation of an enclosure over the bathhouse. Pathways were built for tourists, along with an observation post, toilet facilities and outdoor lighting. The last innovation at Garni was in 2009, when the entire site was subject to radio positioning. Aesthetic lightning was also installed around the temple, allowing for concerts and other cultural events to be staged at night.

Here, it is important to remember that it took the architectural historian Alexander Sahinyan a mere six years (1968-1974) to reconstruct the Garni Temple.

In comparison, in the ten years since Vladimir Poghosyan has headed the “Service for the Protection of Historical Environment and Cultural Museum-Reservations” NCSO  (the first seven as deputy director and the last three as acting director), the Garni Reserve hasn’t even obtained legal status; it doesn’t have a deed from the state real estate cadastre.

When asked why not, Poghosyan avoided responsibility for the oversight, saying that the issuance of deeds falls within the jurisdiction of the State Committee of the Real Estate Cadastre. Poghosyan failed to say if he’s ever raised the matter with the Cadastre.

He probably has not. For if the reserve was to be granted legal status any type of commercial activity would be banned…including a café.

Those visiting Garni are still deprived of the opportunity of viewing the artifacts of the 3rd century BCE fortress built as a summer residence for the Armenian Orontid and Artaxiad royal dynasties.

Alexander Sahinyan, the architect who reassembled the temple, intended to build a museum at the site that would put the wonders unearthed there on public display. The museum has never got off the ground.

In the early 1980s the architect Hamlet Khachatryan drafted a schematic for the museum and for the restoration of the bathhouse and the fortress.

Vladimir Poghosyan told Hetq that the construction of the museum is included in his agency’s 2015 interim expenditure project. 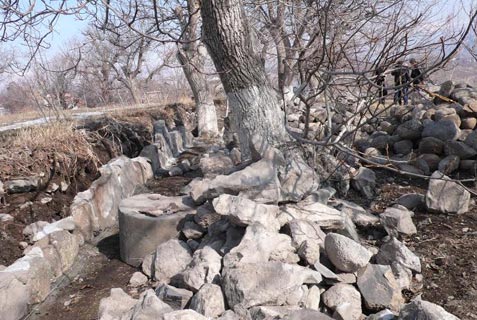 “Sadly the monumental work has remained on paper all these years. Last year, we instructed Khachatryan to review his plan for the museum and to make corrections where necessary. It will be two-story structure erected on the site of the present archeological depository building next to the bathhouse in the Garni Gorge portion,” Poghosyan told Hetq.

Poghosyan promised that if Khachaturian’s plan is approved by the Ministry of Culture, his agency would begin implementing it.

In the meantime, the NCSO plans to organize an open-air exhibition of some of the khachkars (stone crosses) and other archeological artifacts unearthed in past digs.

Poghosyan says that the exhibit will most likely be installed next to the bathhouse, where work on the new café is scheduled to start this May. As to how Poghosyan justifies the juxtaposition of an exhibition of archeological artifacts alongside a café remains a mystery.

One of the artifacts to be displayed is a 1st century marble head of a bull found by a reserve employee in the nearby Azat River gorge in early 2011. As to what other artifacts lie buried in the area is a question that can only be answered by continued excavations.

While the Garni Temple is a prime example of the pre-Christian culture in the region, it has yet to be included as a UNESCO World Heritage Site. There are many reasons for this.

UNESCO wants to see the Garni Reserve presented in its entirety, including the Azat River gorge.

But after the pillage of the Symphony of Stones and the ministry’s ‘restoration’ of a nearby medieval bridge with modern toufa stones, UNESCO will hardly contemplate granting Garni such status.

And once the café is built on the site, you can forget about Garni making the UNESCO list once and for all.

If this is the wish of Armenia’s Ministry of Culture it has unequivocally succeeded.