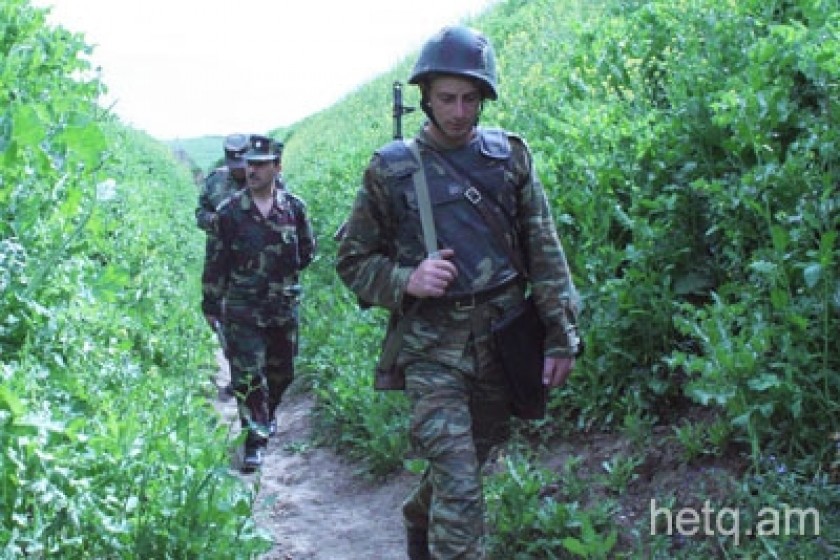 The main artery in Artsakh is the North-South Highway. Down in the south of the country, its terminus is an intersection known as the “9 kilometer”. A yellow traffic sign that reads the “Araks River Valley” points to a road leading off to the right. The other two roads at the intersection head of to the left and the other, straight ahead.

If you follow the road leading towards the Araks, you will arrive at the former Azeri settlement of Jabrayil, now called Jrakan or Mekhakavan. Following the other road will take you to the Horadiz Station. Today, however, it’s not in use. The road passes along the contact line between the Karabakh and Azerbaijani forces. In fact, while the station lies on the other side of the border, the town itself lies under the control of the Armenian forces. The road heading off to the left from the intersection is in pretty good shape despite the fact that it was paved years ago. It leads to Fizuli, currently Varanda. The former town remains in ruins. It spreads on a flat expanse of land nestled at the foot of low hills, in a valley through which the Ishkhanaget River flows from mountainous Karabakh to lowland Karabakh.

From here the roads lead to Varanda, Jrakan and the Araks River

Here, in contrast to the uplands, the temperatures are a few degrees warmer. Naturally, summer arrives earlier than in the highlands. The road winds its way through abandoned and ruined settlements. As I traveled along, my attention focused on the green thorny bushes, about the height of a man that had started to cover the ruins of the one floor houses and had taken over the adjacent fields. At the entrance to Fizuli, a huge traffic sign had been completely rusted away by the rains. If I looked close, however, I could still make out the place names in Russian. There were arrows pointing the way to Aghdam, Yevlakh and Baku. On the other side of the sign, for travelers approaching from the opposite direction, there were directions to Jabrayil and Horadiz. At one time, these were well trafficked roads and the two “brotherly” peoples were free to go and come as they pleased. Today, if you dare walk along the curbside or the fields on either side, you just be unlucky enough to set off a landmine. 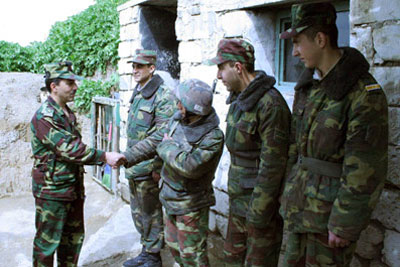 Colonel Sergey Mamunts is looking at the waters flowing on the other side of the border. “You know, we must hold on to these waters. They are a great resource and are of great importance both strategically and in terms of energy,” he says. Colonel Mamunts is Chief of the NKR Defense Forces’ Services Division and has been directed to survey conditions along the front in this sector – communications, living conditions for the troops, engineering equipment – everything needed to keep the border impregnable.

At the command post we were met by Battalion Commander Lieutenant Colonel Ashot Harutyunyan. We continued along the road in his vehicle. It was sweltering in his Vilis jeep; there was almost no air to breath. But the driver, a soldier wearing a winter coat, navigated around the pot holes filled with mud and other road obstructions masterfully and quickly. Lieutenant Colonel Harutyunyan says that there has been no movement on the part of the opponent registered during the past few days but nevertheless, every morning at seven, they must report to the military unit commander regarding any incidents at the front, changes in the opponent’s positions, the state of communications; in a word, anything of significance.

A soldier must obey without reservation

This is the life of a soldier. He must carry out the commands of a superior correctly, on time and without reservation. A bit later, we are joined by the company commander, Captain Vardan Sargsyan. Colonel Mamunts must also inspect his unit as well. Captain Vardan is 27 years-old and has been serving in the army for six years now. He says that his love of military service began during the years of the Karabakh Movement and the war. “During those difficult years of the 1990’s, during the war, blockade and economic crisis, I was in the first grade. Back then young people dreamt of going to college and other such things. But often, people could just barely manage to feed themselves. There wasn’t much in the way of opportunity. Back then, you couldn’t name a region, a district, that didn’t see the return of a young soldier’s corpse every other day. We’d see all that and think to ourselves that we too would have to go.”

From 2000-2004, he studied at the Vazgen Sargsyan Military Institute. He says that during his command, the company hasn’t encountered any incidents along his stretch of the border. While there is the occasional ceasefire violation when the opponent opens fire, the Armenian side quickly responds and the firing stops. “The troops are mentally psyched for battle. Today, the slogan of the NKR Defense Force is, ‘We are preparing for battle’. We’re in high spirits. If hostilities break out, all our guys will fight, not with the aim of giving lands back, but to liberate even more,” said Captain Vardan.

Poisonous snakes are a real threat

Getting out of the car we walked through the trenches to the frontline. Lieutenant Colonel Harutyunan was telling us that in this sector poisonous snakes were posing a great danger to the soldiers. The warmer weather has triggered them out of the underground nests. Just as he finishes his sentence, a 30 centimeter snake appears from under a bush. The officer crushes its head under the heel of his boot. The guys in the trenches carry large sticks to defend themselves from their poisonous slithery neighbors.

Leaving the trenches, we come upon one of the positions manned by Senior Lieutenant Sograt Gevorgyan. The soldiers tell us it’s a mere 1,200 meters to the enemy positions. It’s probably due to the short distance that no enemy fire has reported of late. The Armenian border patrol did say that on occasion the enemy used the cover of the river thickets to make their way to the neutral zone. Colonel Mamunts checks the communications grid, asks a few more questions to the soldiers manning the observation post, and then leaves. All is in order. 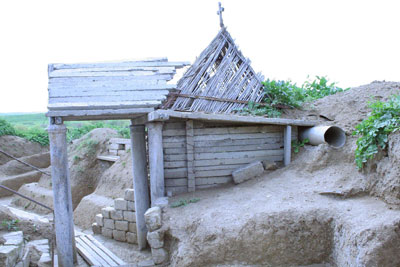 Senior Lieutenant Matevosyan, who oversees the support positions, escorts us to an adjacent post. Sergeant Gagik Minasyan, hurries to where he are and reports that nothing out of the ordinary has occurred under his watch. Today is a holiday for one of the privates on watch. Andranik turns twenty today. But service comes first.

Alongside the barracks, the men have constructed a make-shift chapel, complete with holy pictures and handmade crosses. In this sector, it’s about 1,000 meters from trench to trench. It’s a distance that can be easily overcome by a high-powered sniper rifle or a large caliber artillery shell.

We are all one big family

The further we travel; the buffer zone between the two lines gets narrower. At the next post, Mergelos Amirkhanyan, the soldier in command, tell us that the two sides are only 150-200 meters apart. Mergelos has been in the army for 23 months; 19 of which at the border. Despite the short distance separating the two sides, he says that shots haven’t been fired in over a year. The only real incident he can recall is when a wolf tripped a land mine in the field beyond. “My job is to make sure that if seven of us go to the forward post, all seven return,” says the 23 year-old junior sergeant. 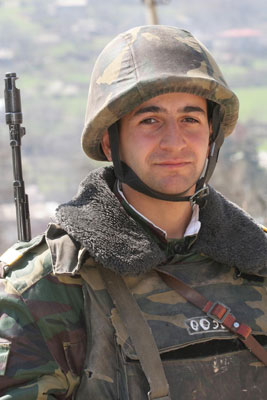 “The guys know that the responsibility for this post here rests on my shoulders but that they also have an obligation to make sure that all runs smoothly. We get the job done by showing mutual respect,” says Mergelos. “We are all equal here at the front. You can say we’ve become a big family, each watching out for the other. The seven of us eat, sleep and work together for a week. We tell each other things we wouldn’t dare confide to others.” True, there are arguments, but they are mostly debates. Amirkhanyan says they are just heated debates on this or that issue. He says he can’t remember one incident on the front where things got “personal” and out of hand. “We each carry 120 bullets. If any one of us gets a bit hot under the collar he can injure the others and himself as well. This is why we try to avoid such situations. We even are afraid of getting into arguments. A man is capable of anything when tempers flare.”

The last stop on our visit was the post of Lieutenant Frunze Hakobyan. One of the positions under his watch is just 60 meters from the enemy; a distance easily covered by a machine gun. Colonel Mamunts makes the rounds, checks the defensive perimeter and engineering equipment and asks a few questions of the soldiers at the observation post. Here too, the answers he receives are satisfactory.

“The most important thing is that our boys feel that they are the soldiers of a victorious army. A soldier must always have such feelings. The enemy on the other side shoots off rounds out of fear. Our soldiers are well aware of this,” says Colonel Sergey Mamunts.

“Today, Azerbaijan is constantly talking about resuming military operations,” I say. Colonel Mamunts replies that such talk has been around for a long time. “When did Azerbaijan ever say that it wanted to let us have these lands? It never happened. Such boasting has always occurred but it’s recently increased. But talk is cheap. In the end, developments on the ground will ultimately decide who will hold onto these lands or give them back. I am convinced that our soldiers on the border are not the ones to give back anything.”