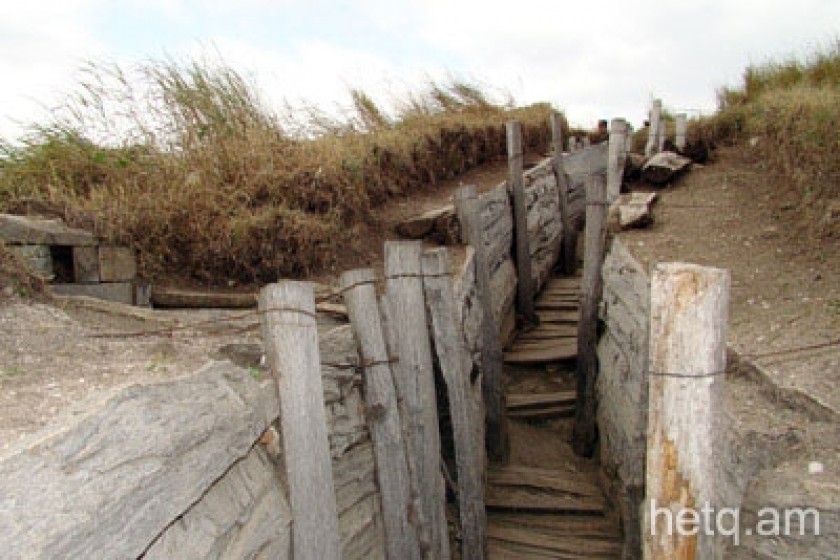 The military unit defending the northern stretches of the NKR is surrounded by thickly forested hills. Here, the frontline positions of the Armenian and Azerbaijani forces are quite a distance away. The average foot soldier at the front doesn’t present an easy target for opposing snipers.

Kamo Haroutunyan, the regimental commander’s patrol deputy, says, “We never take pot shots at enemy soldiers, even when a few ‘hot-heads’ leave the trenches and try to advance on us. We just shoot a few warning shots in the air and force them back. If we did kill some soldiers what would we say? It’s another thing if their sharpshooters try to advance and target our guys.”

Lieutenant Colonel Haroutunyan tells us that in the last two years no one from the NKR Defense Forces has been killed at this location. “In 2007, an enemy sharpshooter killed one of our soldiers but we killed five of them in return. This is how we respond; a 5 to 1 ratio. If we don’t retaliate in such a manner the enemy will get cocky.”

The lieutenant-colonel says that the enemy has lately been carrying out engineering work in the area and has built a main trench to connect various outposts.

“The work has been slow but they’ve made progress. It’s understandable; they want to unify the entire frontline and fill it with fresh troops. They want to increase troop concentrations and I can’t see this as a defensive measure. Azerbaijan’s strategy is one of attack and they are constantly preparing for war,” says Kamo Haroutunyan.

He assures us that our forces are also preparing for war.

“Our devised program is both defensive and offensive. Later, Shahoumyan and Getashen lie ahead,” says the lieutenant-colonel with a smile.

Davit Manoukyan, the regimental commander, says, “Our army has but one mission – to go to war. 100 or 1,000 years can pass; we will always go to war. All of us must understand this. If we lose sight of this we will be defeated because our neighbors are such that we must be constantly on our guard are ready for all eventualities.”

The commander finds it natural that Azerbaijan is preparing for war. “Someone who loses a fight is always looking for excuses. This is what Azerbaijan is doing. We have no fear. We did our duty and liberated a portion of Armenian lands. We are at peace with ourselves and are prepared to strike back at the slightest provocation.”

Commander Manoukyan reminds us that a major factor in our benefit during the war was our positional advantage and that it allowed us to wage war with a minimum of forces and to strike quickly and stealthily.

“I can explain it another way. If a full division was to attack our regiment, we’d win due to our positional advantage. But if an entire army was to attack, we could only resist, says Lieutenant-Colonel Haroutunyan, adding, “In addition, we have various contingency plans. We might let them advance in one sector only to be surrounded and destroyed. We have many such surprises in store for them.”

Division Deputy Commander Norayr Mkrtchyan says, “Presently, the balance of forces is more or less equal. We’ve established our defensive strategy based on the enemy’s forces and capabilities.”

“Of course, in terms of manpower and financial resources, Azerbaijan has the upper hand. But that was the situation at the beginning of the last war and they didn’t benefit from the advantage. Our soldiers are so thoroughly trained in the efficient use of military equipment that it will make up for the numerical imbalance in manpower,” argues Commander Davit Manoukyan.

He would like to see Armenian President Sargsyan participate in the Karabakh conflict settlement negotiations from a position of strength; as the victor. “I get the feeling that the president will make such a move. He can rest assured that if war once again breaks out we will come out the winners. Let’s remember that we entered the fray with hunting rifles and wound up with tanks mostly captured from the enemy.”

The commander has a final word of advice for the Azeris. “I won’t give out any military secrets but the army has a specific plan. They will attack along just one front and won’t be able to resist our offensive operations elsewhere. Let there be no doubt on this. And I never make idle threats.”