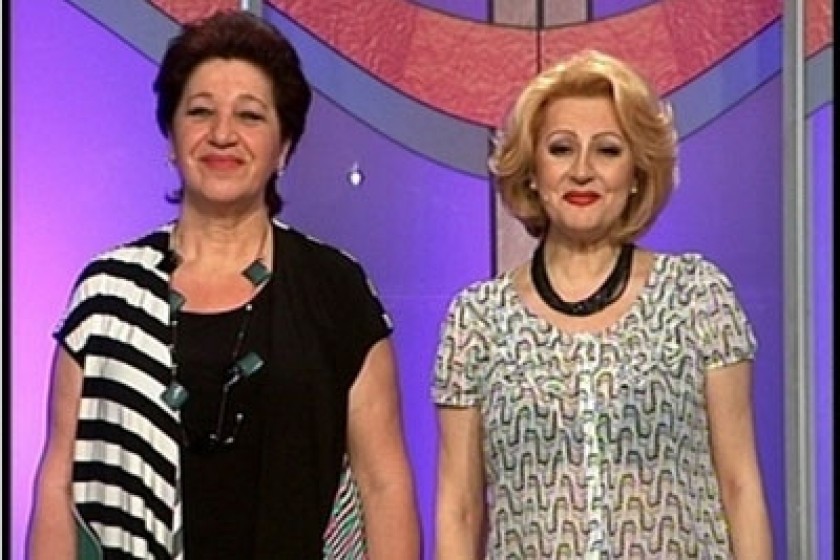 The latest fad to hit Armenian TV is a program called “Let’s Get Married”.

Eligible bachelors and bachelorettes are grilled by a trio of middle-aged Armenian ladies asking perile and trivial questions of the hapless contestants who must bare their innermost emotions before the TV cameras. Here’s a small snippet of a recent show.

- Today, our hero is Rafayel Melkonyan. Before we invite him onstage let’s watch a brief video about him.

- Rafayel, you’re not working in any professional capacity. What exactly do you do?

- I’m working in a very pleasant medium. I sing.

- Rafayel, do you fall in love often?

- What kind of girl are you looking for?

- Beautiful. All girls are good looking but I want the most beautiful.

- And do you think I was beautiful as a girl?

- Yes, of course. Just those beautiful words you utter...

- Dear Garineh, what’s important for you to fall in love with a guy?

- Well, first off is his appearance.

- To be honest, the eyes aren’t that important

- Would you marry a guy who is a penny-pincher?

I guess you get the picture.

Every week, the actress Julietta Stepanyan, dancer Sofi Devoyan and a guest astrologist combine their years of match-making experience in the pursuit of pairing up Armenian young men and women who agree to appear on the show.

Many might ridicule the show for being just another example of entertaining “fluff”, but in fact it’s the stuff of real lives and people.

I had a chance to meet with the show’s producers and writers. Here are a few questions I put to them.

What’s the aim of the show?

Hakob Hakobyan – We want to get kids away from meeting one another on the street and put them on the right track through our psychologist and astrologer. We want to provide them with some correct advice and help resolve those with personal problems.

Is it really ethical to broadcast those personal problems over the airwaves?

H.H. – Why not? They want to talk about them. We don’t force them to talk. They say what they want.

But the people who appear on your show are, to a certain extent, vulnerable. I mean, those with an education and a steady job don’t appear on the show to get married.

H.H. – Most of our guests are from the working class and this is very important. They work to get ahead in life. Whether or not they once attended school is another matter. They come here to meet people and get married. We already have one marriage to our credit. We also have hundreds of older people as potential participants.

Great, let’s assume that you assist older adults and those living with certain hardships to find their match. But TV viewers watch the show as entertainment, often laughing at the participants.

One poor girl on the show became the laughing stock on certain internet social sites. Do you say that’s par for the course?

H.H. – That’s the problem of those who like to ridicule others. In our society today we like to make fun of others and degrade them. There are people out there who boast ‘Look at me. I’m 50 and never married. That young girl got married and look at her misfortune’.

Hranush Karapetyan – When we were thinking about broadcasting the show we were afraid it wouldn’t take off in Armenia, that no one would want to participate. But we received hundreds of phone calls. People trust the show. If the TV audience also laughs at what’s going on, this attitude mustn’t be painted in a bad light. TV isn’t only for serious content. There must be a little entertainment as well.

So, in essence, the show is meant to be entertaining at the expense of others?

H.K. – Not at all. If we wanted to be strictly entertaining we would have produced something else all together. Look, you are young and view this program from another vantage point. I understand the meaning of your question. Let the aim of the show be to entertain. Was Leonid Yengibaryan, the famous clown and pantomime artist, less of a man for amusing the Armenian people?