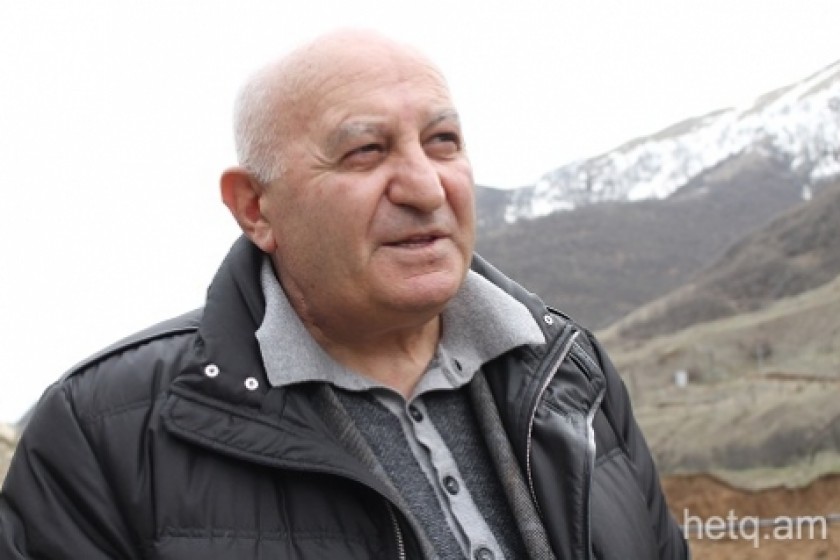 Syunik Mine Owner: ‘Heavy Metals Might be Beneficial to Humans’

Following up on recent rumors in Kapan that a company had started mining exploratory work at the source of the town’s water supply, we headed off towards a community called Nor Astghaberd up in the hills.

Within Nor Astghaberd lies the village of Adjabadj and the Hankasar Mine. Rights to operate the mine were purchased in 2012 by an outfit called Ler-Eks LLC. Maksim Hakobyan, General Manager of the Zangezur Copper Molybdenum Combine (ZCMC), bought the rights from former Syunik Regional Governor Suren Khachatryan. 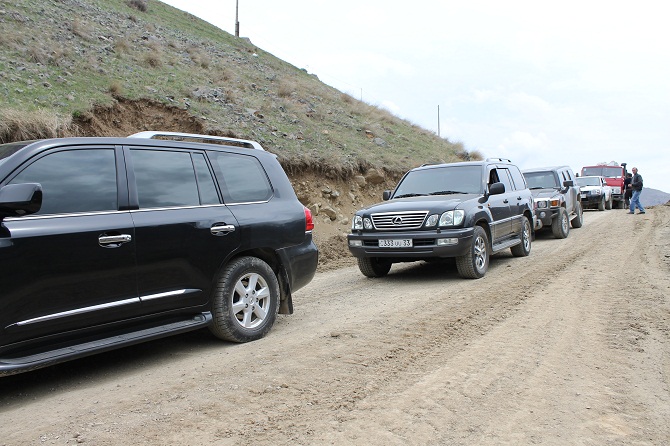 As we were taking photos at Hankasar, a company employee approached and asked us who we were and what we were doing. We told him that we wanted to photograph the tailings dam. We were told to wait since company management was soon to arrive.

A few minutes later three black SUVs pulled up on the narrow road. The window in the lead car rolled down and we saw it was Maksim Hakobyan. He too asked who we were and the nature of our business. After responding, Hakobyan got out and we had the following conversation.

Why did you purchase Ler-Eks?

It is said that you were forced into the purchase.

No one can force Hakobyan Maxim to do anything. They can make a request and I am always willing to listen. But they can’t force me.

It is also said that the mine is unprofitable.

That’s why we obtained it; to make it profitable. 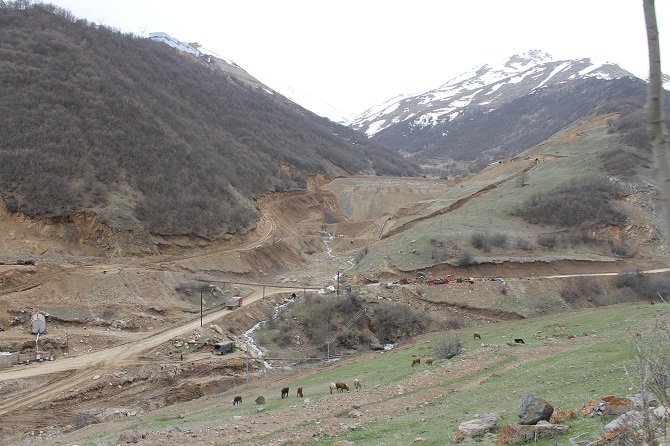 Is it true that the reserves are scare?

Yes, but we have taken it over to make it profitable. We are professionals and this isn’t the first such case. You are well aware that the Kapan Combine is managed by staff from the Kajaran Combine and that we re-launched it. Everyone knows this. It’s still operating. The same happened at Agarak. In the same way we want to get Ler-Eks up and running. And now it is. There are 350 jobs.

Mr. Hakobyan, if it isn’t a business secret, can you tell us the price you paid?

It is a secret. Even though I can announce that info what good would it do?

It’s a point of interest.

It was very expensive. So what? You ask why we purchased it. Let me answer. I bought it so that 300-400 families can work here and survive. And if you take a look around you will see the large resources we have spent to install electric cables. We had no need for it but we installed a 10,000 kilowatt cable for all the villages. This will be followed by a 35,000 kilowatt cable. We want to make sure that not even the slightest environmental damage is done to this valley because I have always regarded it as one of the best places in Kapan. 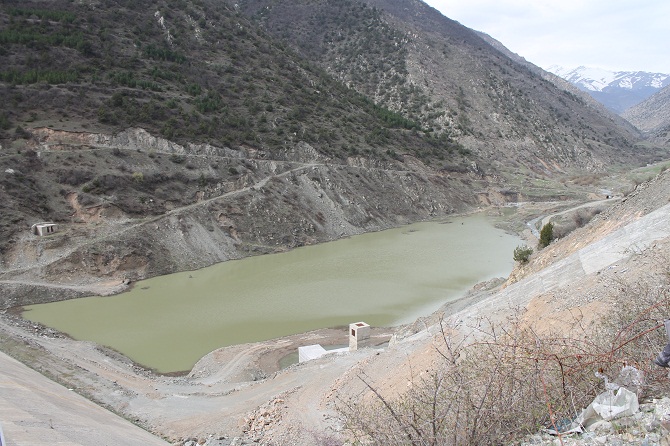 We are also constructing a reservoir in the valley that will have great significance for fish farming and energy production. It’s a huge reservoir, some 15,000 cubic meters of capacity that will assist the work of the cascade-hydro plant on the river.

Will you be involved in fish farming here?

Yes, we too will raise fish. At one time I discharged 300,000 fingerlings but there was an accident and they all perished. But we’ll bring more.

We want to spur sheep farming in the valley. Steps have been taken. Two livestock pens have already been renovated. One of the local mayors has shown an interest. All this is being done to get the valley up and running, to attract people to come and develop things.

Have you started to extract ore from the Ler-Eks mine?

Not yet. Serious studies have to be carried out to gauge the extent of the reserves.

Do you just have an exploratory license?

No. We have an operator’s license, but we’ve held back.

We want to complete the studies first and then start operating. 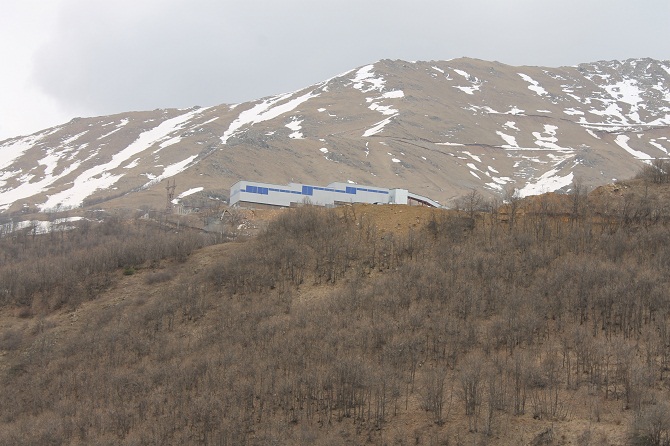 Mr. Hakobyan, the number of accidents at the ZCMC has gone up during the past two years.

Just the opposite. We have periodic mishaps in a tunnel built 40-50 years ago under the tailings dam. It’s going take serious steps to resolve this. We brought in specialists and scientists and even foreign experts.

Why doesn’t ZCMC operate transparently with reporters? Don’t you have a press office?

There is no need. I will never allow such a thing.

Fine, so say a reporter needs to verify some info with ZCMC, who do they contact?

With staff specialists, with anyone working on the issue.

But they always tell us that they first must get permission from you.

That’s very commendable; that rules apply. They can’t do anything without my say so.

But isn’t this a dictatorial approach?

There are places where you have to be a dictator in order to get the work progressing. Are you being a dictator when you tell someone this is the way it must be done and they listen to you? 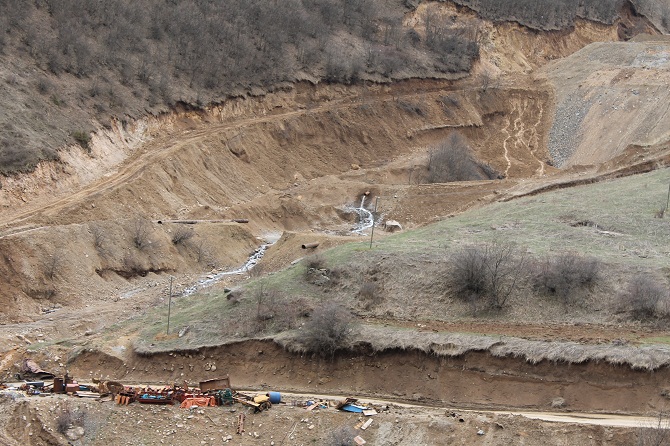 Mr. Hakobyan, in 2008 children in Lernadzor were tested and high levels of heavy metals were found in their hair and nails.

Perhaps such traces are of greater benefit. No one has yet been able to prove what is beneficial for humans. People living on the slope of the ZCNC mine reach ages of 90 and 100. If the mine is going to have an effect on anyone it would be these people and not someone living seven or twelve kilometers away.

Maybe there is something natural there that caused such traces to appear. I can’t say. All I can say with certainty is that the village of Lernadzor has only benefited from the mines in operation.

They spread disinformation that babies are being born with two heads, two feet, or two tails. They themselves are such creatures, the ones spreading the disinformation. Nothing of the sort happens around here.