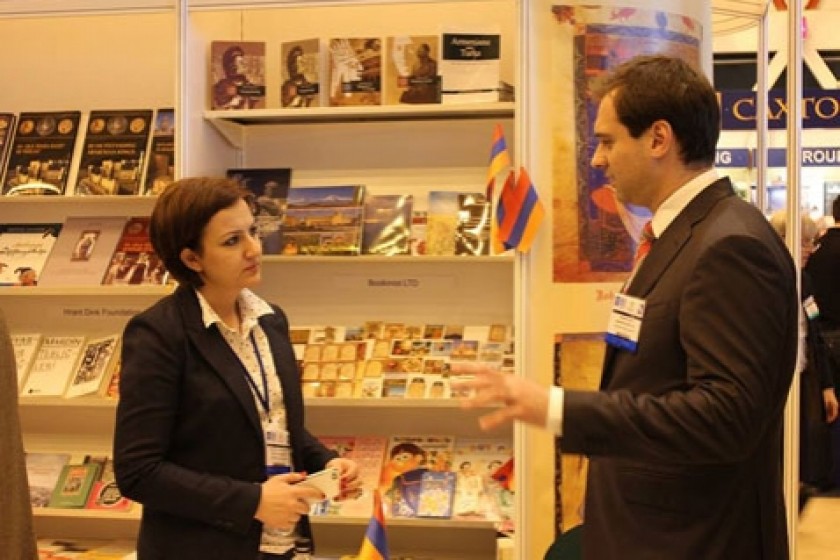 Hetq spoke with First Armenian Literary Agency owner and literary agent Arevik Ashkharoyan about the interest in Armenian authors in the international market, as well as the reaction in Armenia to not only local authors' works, but also translations of famous foreign literature.

For younger readers, it's fantasy, which is now widespread and comes in diverse forms, including supernatural beings to stories about historic or mystic figures. Of course, the detective genre with a mix of mysticism is even now at the center of attention.

But if we're talking about "good" literature, which, nevertheless, doesn't have large readership, such literature doesn't have any specific trend. Most conversations with very serious European publishers are about the fact that the book has to be good: it doesn't matter what it's about, who's the author, his or her nationality, or in what language the book was written.

Considering this, it becomes difficult to separate clear criteria in general terms.

The works of Armenian authors that the agency selects to represent on the international stage — what makes them stand out?

As the head of a private enterprise, I am free to choose the books that I like, but that doesn't mean that I also don't listen to the advice of experts. The main criteria at this time is the genre of the book and the date of publication.

At this stage, we mainly represent novels because they're in great demand. They must be published in recent years because the matter of contemporaries is discussed greatly on the international stage.

Of such authors, whose works have attracted interest in the international market and why?

The greatest interest at this time is in Aram Pachyan's novel Goodbye, Bird. I think, the interest is because the book presents issues that are relevant for youth all over the world — regardless of nationality or place of residence.

Using allegory, the novel describes a young man in a closed society establishing himself and making a choice between "bad" and "good". One of the unique characteristics of the novel is the impact of each person's childhood experiences on a person's entire life. These are universal issues.

The other book that also enjoys interest is Hovhannes Tekgyozyan's novel The Fleeting City, which also touches upon many contemporary issues.

There is an accepted, perhaps in some respects stereotypical statement that we [Armenians] don't have "contemporary literature" or that what we have is worth nothing. I follow numerous discussions especially on social networking sites, when not perceived is not only the new book, but also the translations of the most popular examples of foreign literature. Recently, I frequently come across such heated debates as, for example, the uproar over the translation of Henry Miller's Tropic of Cancer — directed against translator Zaven Boyajyan.

It's quite interesting — often people label a book they haven't read. And what's deplorable is that often famous people do this: TV hosts, actors, politicians, or writers who "made a name" for themselves in Soviet Armenia. They create the impression and opinion for others who don't read it.

I have witnessed instances where a writer is invited as a guest on a television program. The host reads an excerpt from one of his works (usually a "scandalous" excerpt; in their opinion, containing "obscene" words or content) and then demands the author answer for what he wrote.

There's the impression that all of Armenian contemporary literature begins and ends with this one work by this one author. Is this a special policy? What is it? It's disappointing, nerve-wracking, when doing this is a television host who's hardly read one or two contemporary books.

But those authors' books are in bookstores, publishers more or less promote them, events are organized for every newly published book… Do you mean to say the reader is indifferent?

Every author has his circle of readers. They are very active — there are even fans who send anonymous gifts to writers. The issue is how to broaden their circle. As, for example, Russian-language readers, whose numbers are few, to persuade to read Armenian authors' books and to read impartially, without a biased attitude, as to what an Armenian writer should write, that…

Also often heard are opinions that it's not worth reading the Armenian translations. I don't know what they mean. What's the problem with Armenian? Why should the Russian translation be better than the Armenian? It's as if Soviet propaganda is still active in our country.

Basically, there's the problem of not only increasing readership, but also, first of all, changing readers' attitudes toward the Armenian [translations].

In my opinion, the school should resolve this issue, but it still can't or doesn't aim to do so.

On one occasion, in conversation, you said that European publishers are particularly interested in the works of female writers.

Yes, when they see our catalogue where only male writers are represented, they always ask if there aren't female writers. In European countries, it's even obligatory to maintain [gender] parity. Of course, it's not worth it at the detriment of professional quality. Our agency will soon announce a competition for female [Armenian] writers so that we discover new names and provide an opportunity to publish them as well.

The term "literary agency" is quite binding. Nevertheless, you can already speak of successes. I know that Gurgen Khanjyan's Yenok's Eyewas published this year by America Star Books.

Yes.  Also, we have signed a contract with Turkey's Kalem agency for the Turkish publication of Hovhannes Tekgyozyan's The Fleeting City. The book will be published by Ayrinti Publishing House. There are a few contracts with Georgia, Ukraine, Bulgaria, Denmark, and Germany, which are in progress.

P.S. The First Armenian Literary Agency has been operating for 3 years, representing the books of Armenian authors in the international literary market and establishing ties with foreign publishers. The literary agency represents 40 Armenian titles, the majority of which is fiction. There are also poetry, children's, and non-fiction titles.